The LSC carries out the science of the LIGO Observatories, located in Hanford, Washington and Livingston, Louisiana as well as that of the GEO600 detector in Hannover, Germany. Our collaboration is organized around three general areas of research: analysis of LIGO and GEO data searching for gravitational waves from astrophysical sources, detector operations and characterization, and development of future large scale gravitational wave detectors.

Founded in 1997, the LSC is currently made up of more than 1000 scientists from over 100 institutions and 18 countries worldwide. A list of the participating universities.

The Laser Interferometer Gravitational-Wave Observatory (LIGO) consists of two widely separated installations within the United States -- one in Hanford Washington and the other in Livingston, Louisiana -- operated in unison as a single observatory. LIGO is operated by the LIGO Laboratory, a consortium of the California Institute of Technology (Caltech) and the Massachusetts Institute of Technology (MIT). Funded by the National Science Foundation, LIGO is an international resource for both physics and astrophysics.

As members of the LIGO Scientific Collaboration, we recognize the importance of diversity to enrich our research and scholarship. We pledge to provide a welcoming, inclusive environment to talented individuals regardless of characteristics such as, but not limited to, physical ability, race, ethnicity, gender, sexual orientation, economic status, or personal religious practices, and to support the professional growth of all collaboration members.

The LIGO Scientific Collaboration and Virgo Collaboration recognizes the challenges faced by scientists who belong to underrepresented groups. We celebrate the contributions made to the LVC's achievements by physicists, astronomers, engineers, detector operators, students, and staff who identify as women, transgender, non-gender-binary, intersex, and/or gender-diverse.

We also pledge to work to increase the numbers of women and under-represented minorities that actively participate in the LVC, to pursue recruitment, mentoring, retention and promotion of women and under-represented minority scientists and engineers, and to maximize their contribution to excellence in our research. As a collaboration, we will strive to create a professional climate that encourages inclusion and that respects and values diversity.

The LSC Speakers Board strives to equitably distribute speaking requests to appropriate members of the LSC. If you are looking for a speaker for your conference or other event to talk about LIGO or LSC results, please send a request to lsc-sb@sympa.ligo.org. Someone will get back to you promptly.

To learn more about the priorities and plans of the LSC's Science Program, see the LSC Program document: 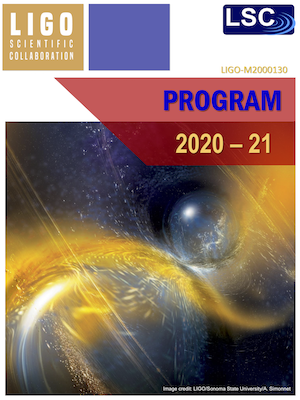