On October 16, 2017, the LIGO Scientific Collaboration, Virgo Collaboration, and its partners announced the first observation of gravitational-waves from a pair of inspiraling neutron stars. Electromagnetic emission from the resulting collision was also observed in multiple wavelength bands. This occured on August 17, 2017 and represents the first time a cosmic event was observed with both gravitational waves and light.

On Aug. 17, 2017, the Laser Interferometer Gravitational-wave Observatory (LIGO) and Virgo detected, for the first time, gravitational waves from the collision of two neutron stars. The event was not only “heard” in gravitational waves but also seen in light by dozens of telescopes on the ground and in space. Learn more about what this rare astronomy event taught us in a new video from LIGO and Virgo. (Credit: LIGO-Virgo)


Simulation of the Neutron Star Coalescence GW170817. The video shows a numerical simulation representing the binary neutron star coalescence and merger which resulted in the gravitational-wave event GW170817 and gamma ray burst GRB170817A. The two non-spinning neutron stars have masses consistent with the LIGO/Virgo detection on 17 August 2017. While only the gravitational-wave signal emitted during the inspiral of the two neutron stars has been detected, the detection of an electromagnetic counterpart suggests the possible formation of a hypermassive or supramassive neutron star followed by black hole formation as shown in the animation. See the corresponding YouTube caption for more details. Related simulations can be found at this link.
[Credits: T. Dietrich, S. Ossokine, H. Pfeiffer, A. Buonanno (Max Planck Institute for Gravitational Physics)] 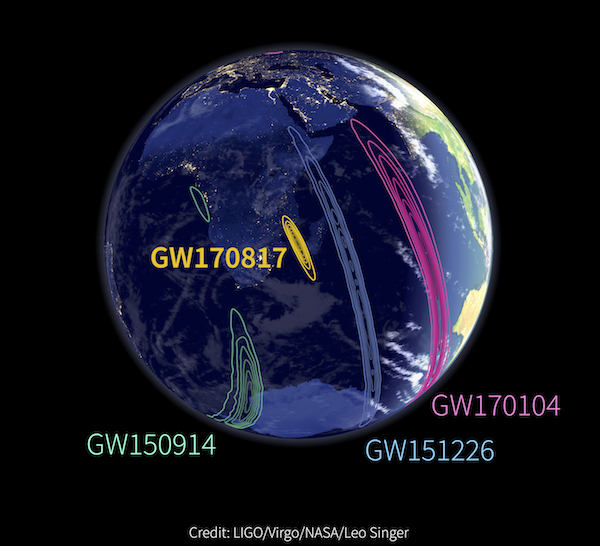 Sky Localizations of Selected Gravitational-Wave Events. Sky localizations of gravitational-wave signals detected by LIGO beginning in 2015 and, more recently, by the LIGO-Virgo network. Only events in the same hemisphere as GW170817 are shown. The background shows a projection of the Earth's surface. After Virgo came online in August 2017, scientists were better able to localize the gravitational-wave signals, acounting for the dramatically smaller error ellipse for GW170817. [Credit: LIGO/Virgo/NASA/Leo Singer]


Comparison of Gravitational-Wave Signals and GW170817 Audio. The signal measured by LIGO and Virgo from the neutron star merger GW170817 is compared here to previously detected binary black hole mergers. All signals are shown starting at 30 Hertz, and the progression of GW170817 is shown in real time, accompanied by its conversion to audio heard at the end of the movie. GW170817 was observable for more than 30 times longer than any previous gravitational-wave signal. [Credit: LIGO/University of Oregon/Ben Farr] 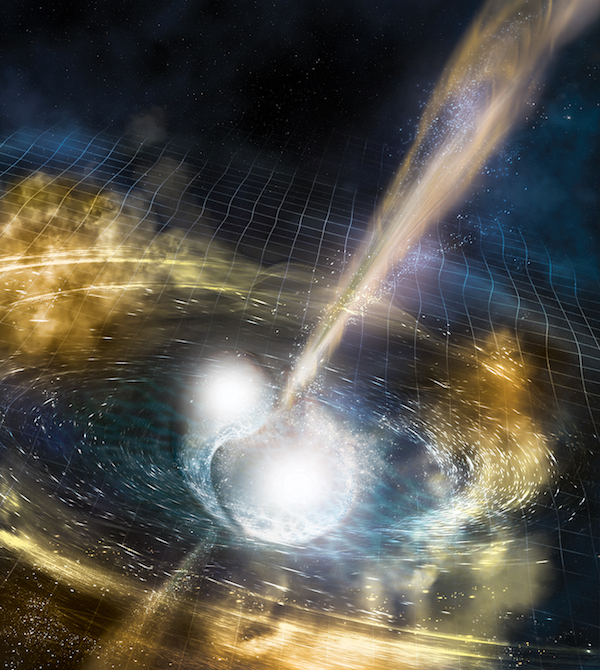 Cataclysmic Collision. Artist’s illustration of two merging neutron stars. The rippling space-time grid represents gravitational waves that travel out from the collision, while the narrow beams show the bursts of gamma rays that are shot out just seconds after the gravitational waves. Swirling clouds of material ejected from the merging stars are also depicted. The clouds glow with visible and other wavelengths of light. [Credit: NSF/LIGO/Sonoma State University/A. Simonnet]


Zooming in on the Source of Gravitational Waves. This animation shows how LIGO, Virgo, and space- and ground-based telescopes zoomed in on the location of gravitational waves detected August 17, 2017 by LIGO and Virgo. By combining data from the Fermi and Integral space missions with data from LIGO and Virgo, scientists were able to confine the source of the waves to a 30-square-degree sky patch. Visible-light telescopes searched a large number of galaxies in that region, ultimately revealing NGC 4993 to be the source of gravitational waves. [Credit: LIGO-Virgo]

First Optical Photons from Gravitational-Wave Source. Swope and Magellan telescope optical and near-infrared images of the first optical counterpart to a gravitational-wave source, SSS17a, in its galaxy, NGC 4993. The left image is from August 17, 2017, 11 hours after the LIGO-Virgo detection of the gravitational-wave source, and contains the first optical photons from the source. The right image is from four days later, when SSS17a—the aftermath of a neutron star merger—faded significantly and its color became much redder. [Credit: 1M2H/UC Santa Cruz and Carnegie Observatories/Ryan Foley]


Coincident Detection with Gravitational Waves and Gamma Rays. This animation reveals the LIGO and Fermi data synchronised to the merger time of the neutron stars. The gamma-ray burst (GRB) occurred two seconds after the merger. The audio is the "chirp" sound of the gravitational wave signal, followed by a "ding" at the GRB time. [Credit: NASA GSFC & Caltech/MIT/LIGO Lab] 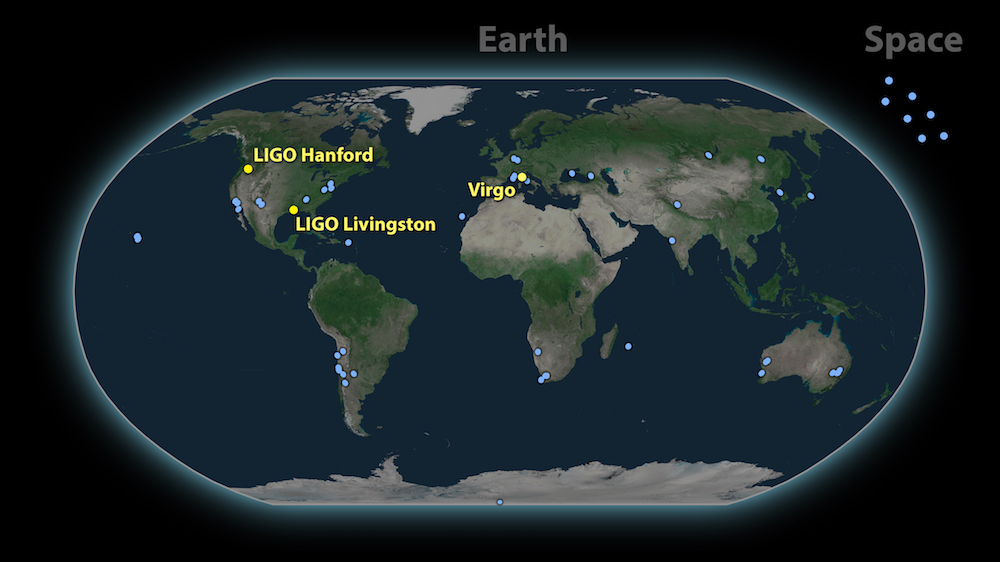 GW170817: A Global Astronomy Event. A map of the approximately 70 light-based observatories that detected the gravitational-wave event called GW170817. On 17 August 2017, the LIGO and Virgo detectors spotted gravitational waves from two colliding neutron stars. Light-based telescopes around the globe observed the aftermath of the collision in the hours, days, and weeks following. They helped pinpoint the location of the neutron stars and identified signs of heavy elements, such as gold, in the collision's ejected material. [Credit: LIGO-Virgo]


Last Dance of Neutron Star Pair. This simulation shows the final stages of the merging of two neutron stars. The merger shown in the simulation is happening much faster in reality, within less than a hundredth of a second, and produces strong gravitational waves. This illustrates one of the possible scenarios for the merger event GW170817, detected by the LIGO-Virgo gravitational-wave network. The result of the merger could have been a neutron star or a black hole, the latter of which is shown here. [Credit: W. Kastaun/T. Kawamura/B. Giacomazzo/R. Ciolfi/A. Endrizzi] 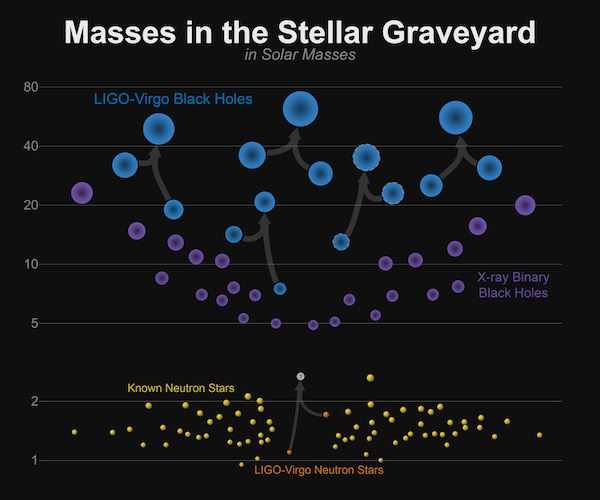 Masses of Neutron Stars and Black Holes. The masses of stellar remnants are measured in many different ways. This graphic shows the masses for black holes detected through electromagnetic observations (purple); the black holes measured by gravitational-wave observations (blue); neutron stars measured with electromagnetic observations (yellow); and the masses of the neutron stars that merged in an event called GW170817, which were detected in gravitational waves (orange). The remnant of GW170817 is unclassified, and labeled as a question mark. [Credit: LIGO-Virgo/Frank Elavsky/Northwestern University]


Jets and Debris from a Neutron Star Collision. This animation captures phenomena observed over the course of nine days following the neutron star merger known as GW170817. They include gravitational waves (pale arcs); a near-light-speed jet that produced gamma rays (magenta); expanding debris from a "kilonova" that produced ultraviolet (violet), optical and infrared (blue-white to red) emission; and, once the jet directed toward us expanded into our view from Earth, X-rays (blue). [Credit: NASA's Goddard Space Flight Center/CI Lab]


LIGO/Virgo Spectrograms with Audio. This movie shows time-frequency spectrograms of the LIGO and VIRGO observations of GW170817. In the LIGO Hanford and LIGO Livingston panels, GW170817 appears as a blue-green/yellow curve. Time evolves rightwards and frequency is plotted vertically. The colors represent the strength of the signal at each time and frequency. A combination of the data from both LIGO detectors is converted into sound and plays in real time. The visible "chirp" signal turns sharply upward near time 0 seconds and is audible in the final moments. Click here for an additional version of this animation with audio from the signal template. [Credit: LIGO/Virgo/Lovelace, Brown, Macleod, McIver, Nitz]


Telescopes Pinpoint Optical Glow of a Binary Neutron Star Merger detected in gravitational waves. The precious elements in our Earth-bound bling, gold and platinum, are thought to have been forged in ancient fiery cataclysms, when pairs of neutron stars spiraled together and merged into black holes. A similar event, the merger of a neutron star binary, was recently detected in gravitational waves by two gravitational wave observatories (LIGO and Virgo) and at optical-infrared wavelengths by the Blanco, SOAR, and SMARTS 1.3m telescopes at the Cerro Tololo Inter-American Observatory (CTIO) and the Gemini South telescope on Cerro Pachon. The detected optical emission, the first optical counterpart to a gravitational wave event, confirms that binary neutron star mergers are indeed major cosmic production sites of rare heavy elements. [Credit: NOAO]. See the NOAO press release page for more information.

Color Composite Images of Galaxy NGC 4993. Composite images of the optical counterpart to GW170817. Each image is 1.5 arcseconds on a side. The left image is taken in the z-band on 2017 August 18 00:05:23 UT and combined with g- and r-band images taken 1 day later. The right image shows the same area two weeks later, illustrating the fading of the optical counterpart. [Credit: Soares-Santos et al. and DES Collaboration]


Neutron Star Merger Seen in Gravity and Matter. This visualization shows the coalescence of two orbiting neutron stars. The left panel contains a visualization of the matter of the neutron stars. The different colored layers are different densities, which have been made transparent to show more structure. The right panel shows how space-time is distorted near the collisions. The spiral wave distortions at the end of the merger propagate to Earth and are measured as gravitational waves. [Credit: Christopher W. Evans/Georgia Tech] 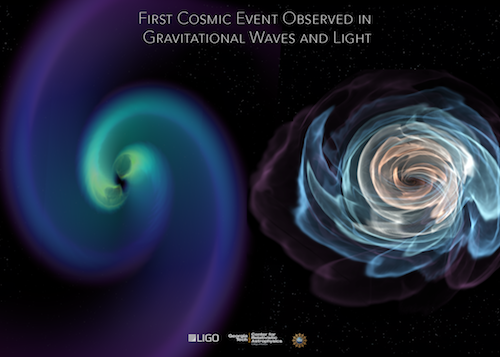 Neutron Star Merger Seen in Gravity and Matter. This still image from an animated visualization shows the coalescence of two orbiting neutron stars. The right panel contains a visualization of the matter of the neutron stars. The left panel shows how space-time is distorted near the collisions. An additional composite image from this simulation can be found here. [Credit: Karan Jani/Georgia Tech] 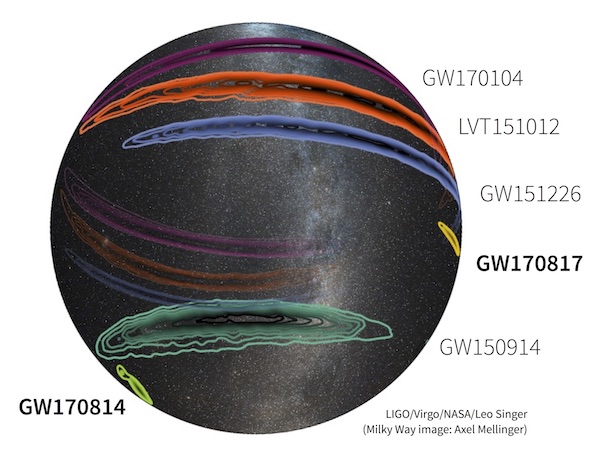 Virgo Helps Localize Gravitational-Wave Signals. Sky localizations of gravitational-wave signals detected by LIGO beginning in 2015 (GW150914, LVT151012, GW151226, GW170104), and, more recently, by the LIGO-Virgo network (GW170814, GW170817). After Virgo came online in August 2017, scientists were better able to localize the gravitational-wave signals. The background is an optical image of the Milky Way. The localizations of GW150914, LVT151012, and GW170104 wrap around the celestial sphere, so the sky map is shown with a translucent dome. [Credit: LIGO/Virgo/NASA/Leo Singer (Milky Way image: Axel Mellinger)] 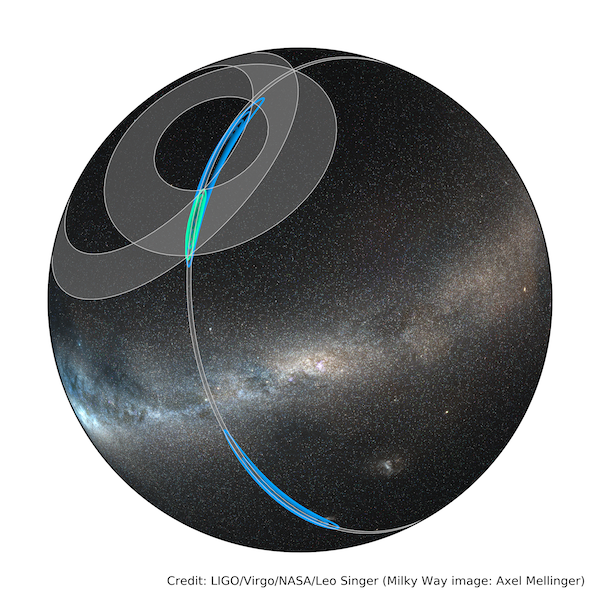 GW170817 Localization and Triangulation Annuli. We can pinpoint sources like GW170817 much more accurately now that we can triangulate the signal between Hanford, Livingston, and Virgo. The rapid Hanford-Livingston localization is shown in blue, and the final Hanford-Livingston-Virgo localization is in green. The gray rings are one-sigma triangulation constraints from the three detector pairs. [Credit: LIGO/Virgo/NASA/Leo Singer (Milky Way image: Axel Mellinger)]


Final Flight of a Neutron Star Pair. This movie shows a possible trajectory of the neutron stars that merged in an event called GW170817. The pair of stars—a neutron star and a normal star—orbit quietly (green), until the normal star goes supernova, spawning a second neutron star and “kicking” the system into an elliptical orbit (purple). The two neutron stars merge and generate gravitational waves, a gamma-ray burst, and a "kilonova" explosion. Other potential lives of the star pair are shown in the thinner lines and circles. [Credit: LIGO-Virgo/Aaron Geller/Northwestern University]