On 2 September 2020, the LIGO Scientific Collaboration and the Virgo Collaboration announced the discovery of GW190521, the most massive gravitational wave binary observed to date. The two inspiralling black holes had masses of about 85 and 66 solar masses, and resulted in the formation of a black hole remnant of 142 solar masses. This remnant provides the first clear detection of an "intermediate-mass" black hole. 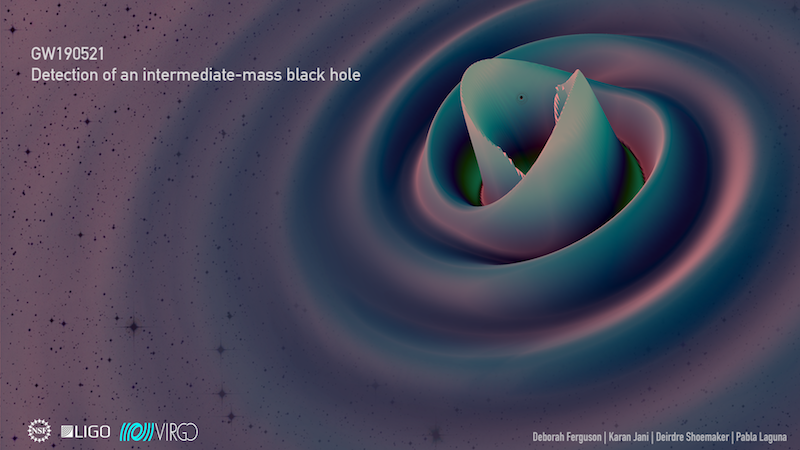 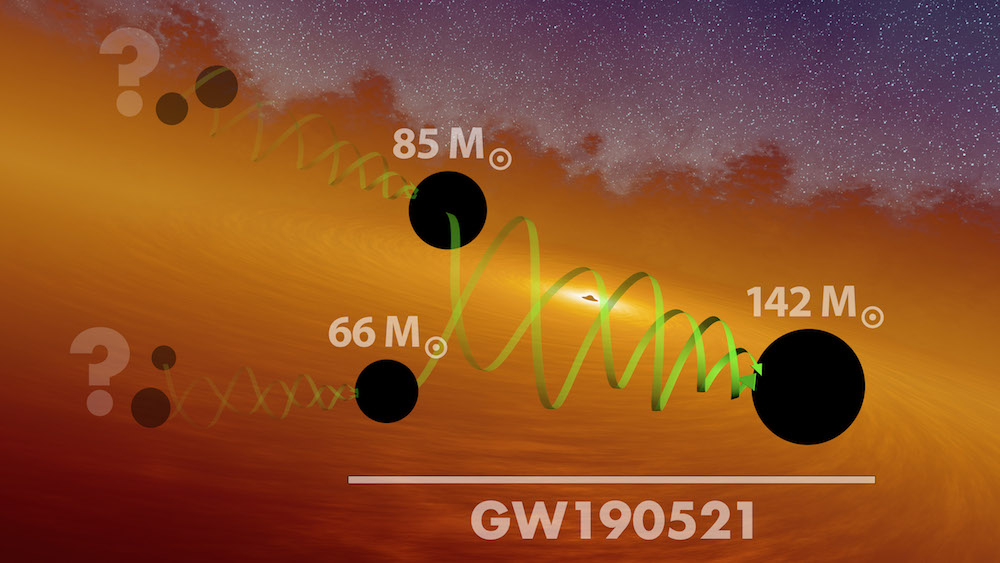 Building Up Black Hole Mass. This artist's concept illustrates a hierarchical scheme for merging black holes. LIGO and Virgo recently observed a black hole merger with a final mass of 142 times that of the sun, making it the largest of its kind observed in gravitational waves to date. The event is thought to have occurred when two black holes of about 66 and 85 solar masses spiraled into each other and coalesced. Theoretical models indicate that nature is not likely to form black holes of this heft; in particular models identify a range of masses between 65 and 120 solar masses, called the "pair instability mass gap," in which it is thought that black holes cannot be formed by a collapsing star. So how did the two merging black holes observed by LIGO and Virgo originate? Scientists think that these black holes may have themselves formed from the earlier mergers of two smaller black holes, as indicated in the illustration. (See also this version without annotation.)
[Image credit: LIGO/Caltech/MIT/R. Hurt (IPAC).] 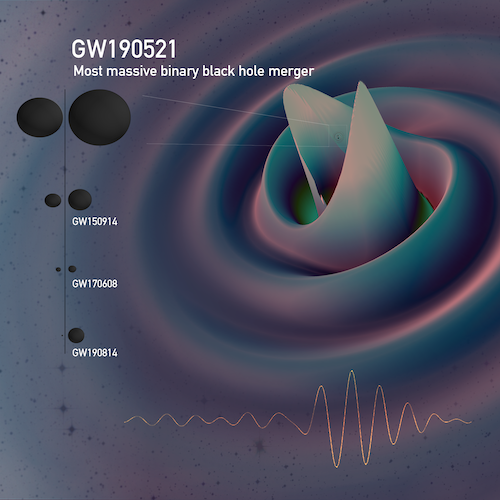 
Spacetime ripples from the most massive binary black hole merger ever observed. This numerical relativity simulation shows the evolution of the black holes and emitted gravitational waves, as predicted by Albert Einstein's General Theory of Relativity. The arrows on the event horizons indicate how fast these black holes are spinning. The animation zooms out to show the propagating spacetime ripples and a plot of the gravitational-wave signal (bottom).
[Credit: D. Ferguson, K. Jani, D. Shoemaker, P. Laguna, Georgia Tech, MAYA Collaboration] 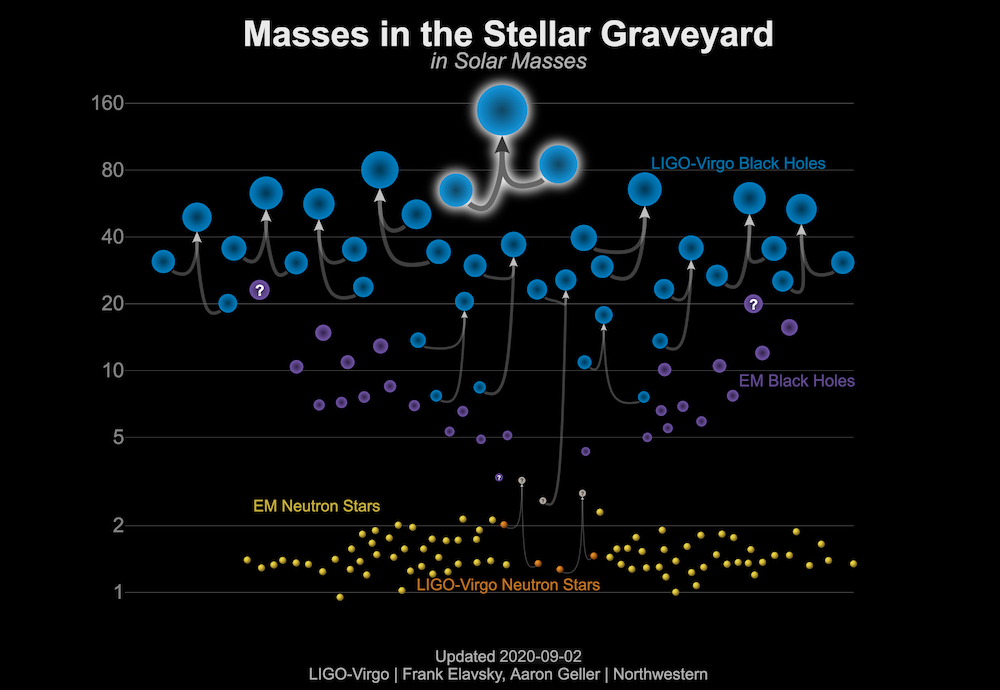 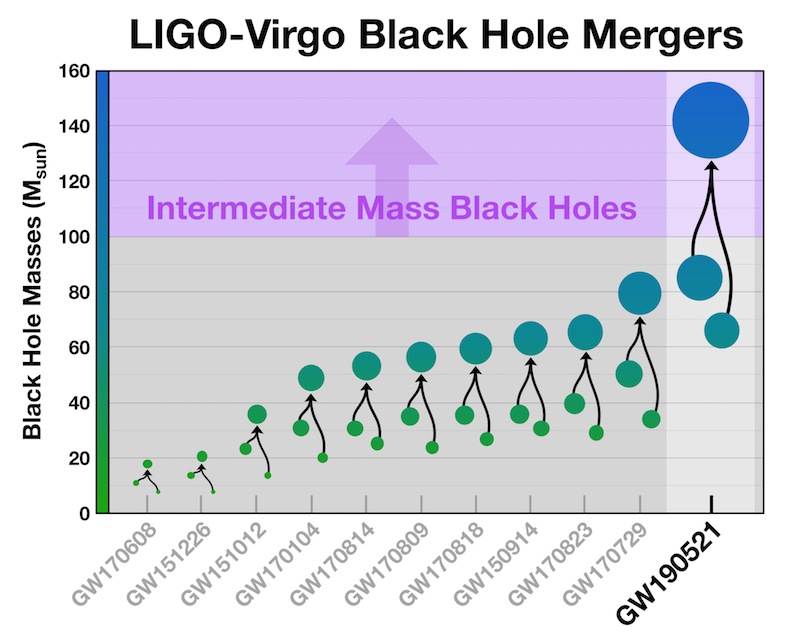 Heftiest Merger Seen Yet. LIGO and Virgo have observed their largest black hole merger to date, an event called GW190521, in which a final black hole of 142 solar masses was produced. This chart compares the event to others witnessed by LIGO and Virgo and indicates that the remnant of the GW190521 merger falls into a category known as an intermediate-mass black hole – and is the first clear detection of a black hole of this type. Intermediate-mass black holes, which have previously been predicted theoretically, would have masses between those of stellar-mass black holes and the supermassive ones at the hearts of galaxies.
[Image credit: : LIGO/Caltech/MIT/R. Hurt (IPAC)] 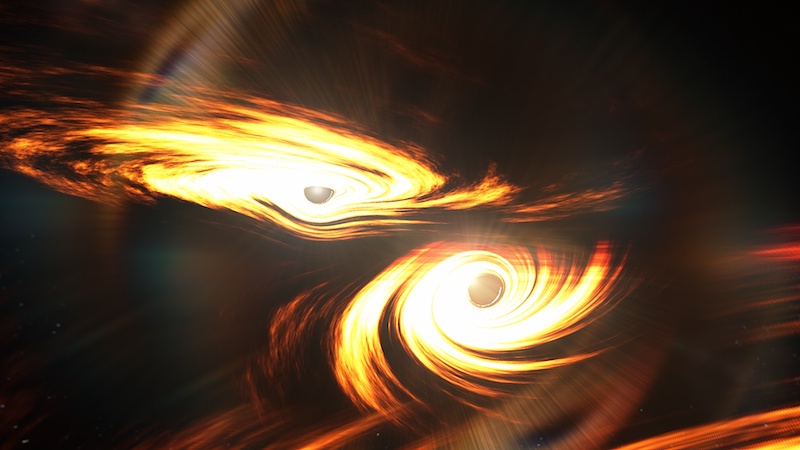 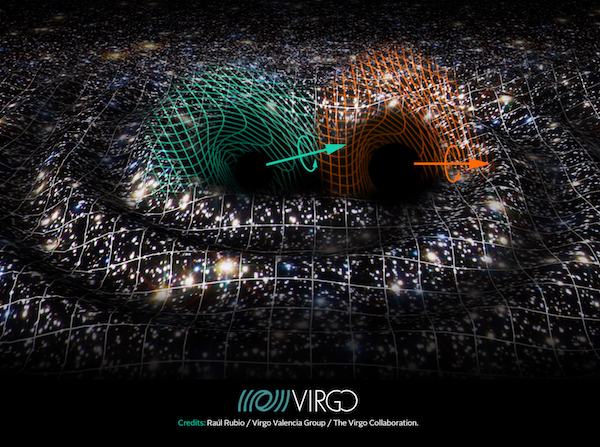 Artistic interpretation of the binary black hole merger responsible for GW190521. In this animated GIF, spacetime, represented by a fabric on which a view of the cosmos is printed, is distorted by the GW190521 signal. The turquoise and orange grids represent the dragging effects due to the individually rotating black holes. The estimated spin axes of the black holes are indicated with the corresponding colored arrows. The background suggests a star cluster, one of the possible environments where GW190521 could have occurred.
[Image credit: Raúl Rubio/Virgo Valencia Group/The Virgo Collaboration.]


GW190521: The Impossible Black Hole. An animation of the merger of two black holes to form an intermediate-mass black hole (GW190521). This "explainer video" is an artistic rendering and not a numerical simulation. Aimed at a non-technical audience, it provides a general explanation of the event and discusses possible formation scenarios of the progenitor black holes.
[Credit: Mark Myers, ARC Centre of Excellence for Gravitational Wave Discovery (OzGrav)/Swinburne University]

Audio files of synthetic gravitational-wave signals, produced from the templates that best fit the data of GW190521. (Use of headphones is recommended to hear the frequency content.) The top file (~1 second in duration) is a short, low-frequncy "blip" starting at 11 Hz and based on the most likely parameters of GW190521. The bottom file (~5 seconds) illustrates the effect of a precessing orbital plane (as might have been the case for GW190521). There, a longer signal is simulated and the frequencies are scaled up by a factor of 200 to improve audibility. The orientation between the source and the fiducial detector was chosen such that one can hear the amplitude modulations caused by precession.
[Credits: Frank Ohme (AEI Hannover, Germany)]