LIGO/Virgo Binary-Black-Hole Orrery. A visualization of the merging black holes that LIGO and Virgo have observed so far. The video shows numerical-relativity calculations of the black holes’ horizons and the emitted gravitational waves, during the final few orbits of the black holes as they spiral inwards, merge and ring down. Each numerical-relativity calculation is consistent with one of the observations in the LIGO-Virgo catalog. As the horizons of the black holes spiral together and merge, the emitted gravitational waves become louder (larger amplitude) and higher pitched (higher in frequency). This movie is inspired by the Kepler Orrery. Also available is a slower version, a version showing only all black hole mergers at once, and still images before merger and after merger.
[Credits: Teresita Ramirez/Geoffrey Lovelace/SXS Collaboration/LIGO-Virgo Collaboration.] 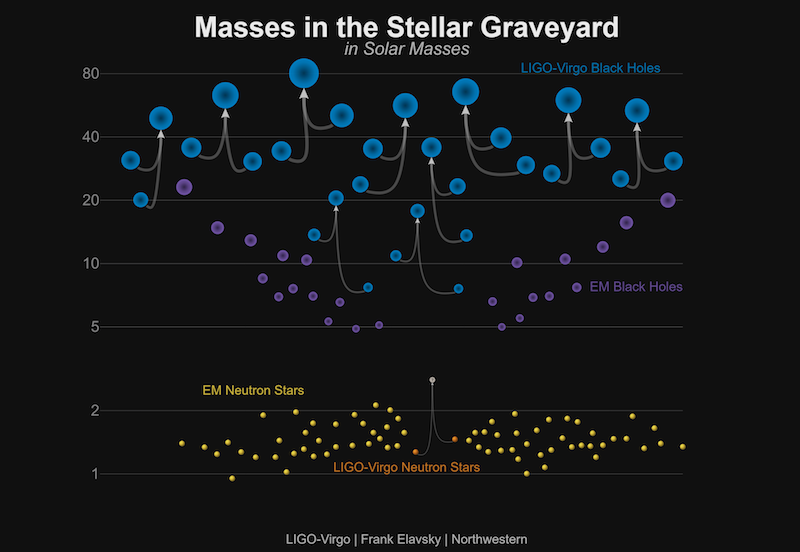 Masses of detected LIGO/Virgo compact binaries. LIGO and Virgo have discovered a new population of black holes with masses that are larger than what had been seen before with X-ray studies alone (purple). This plot shows the masses of all ten confident binary black hole mergers detected by LIGO/Virgo (blue). Also shown are neutron stars with known masses (yellow), and the component masses of the binary neutron star merger GW170817 (orange). See also the interactive version of this figure. [Image credit: LIGO/VIrgo/Northwestern Univ./Frank Elavsky] 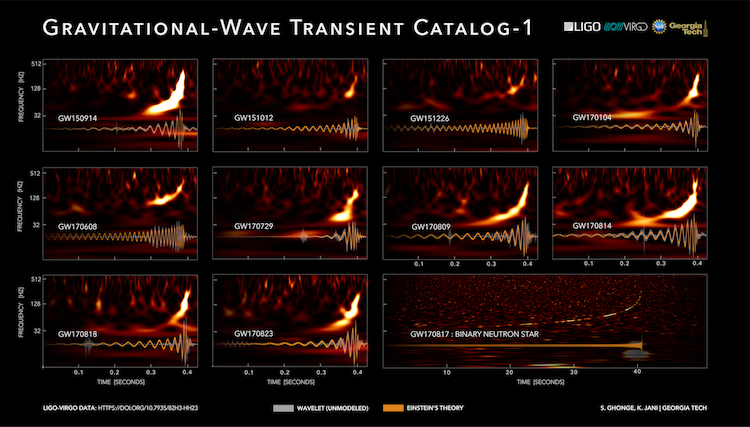 Spectrograms and waveforms for the gravitational-wave transient catalog. The insets of this image show the gravitational waveform (bottom) and time-frequency spectrogram for each confident detection in the gravitational-wave transient catalog. The spectrogram color indicates a measure of signal strength; the increase of signal frequency with time clearly shows the characteristic "chirp" signature of a binary inspiral. The waveforms shown at the bottom of each panel are produced from either a range of models based on Einstein's theory (orange) or a wavelet decomposition of the observed signal (gray). Higher resolution and alternate versions of this image are also available. [Image credit: LIGO/VIrgo/Georgia Tech/S. Ghonge & K. Jani]