A gravitational wave observatory operating beyond the quantum shot-noise limit 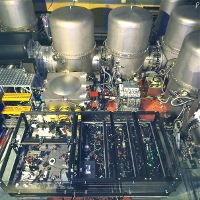 11 September 2011 - Current state-of-the-art interferometric gravitational wave detectors seek to detect gravitational waves through observation of interference patterns produced by the combination of two coherent light sources. Their basic design is that of a kilometer-scale Michelson-type laser interferometer, where a laser beam in an ultra-high-vacuum system is first split in two perpendicular arms and then reflected back by suspended mirrors to produce interference. Gravitational waves are expected to change the relative lengths of the two arms according to well-defined sequence, yielding interference patterns at the detector output. Encoded in these light patterns is the information about the source and nature of the gravitational waves. A global network of interferometric gravitational wave observatory currently exists, comprising two LIGO observatories in the USA (not operational since Nov. 2010 due to upgrade activity), the Virgo project of the European Gravitational Observatory Observatory in Italy and the German-British detector GEO600 in Germany. Further observatories are being planned or proposed in Japan, Australia and Europe.

Light obeys the laws of quantum mechanics. Because of the Heisenberg Uncertainty Principle, the quanta of light (photons) exhibit an intrinsic quantum indeterminacy. Quantum fluctuations of the laser light in gravitational wave interferometers then produce unwanted instrumental "shot" noise, even when the instrument output is measured with an ideal photo detector. Recent advances in the theory and applications of optical measurements have discovered that there exist some quantum states of light with very small noise. In particular, "squeezed light" states show a noise level which is even smaller than the minimum noise of incoherent light made of independent photons. The low noise of squeezed light makes it very attractive for a number of applications from optical communications to quantum cryptography and gravitational-wave detection. Squeezed light can be generated in nonlinear optical crystals and was first demonstrated in 1985. Since its first observation, squeezed light sources have constantly been improved but the generation of squeezing remained an unsolved problem at frequencies where gravitational wave detectors operate. The results presented here by the GEO600 collaboration show that squeezed light can be successfully integrated in current and future interferometric gravitational wave observatories, and become a key technology in making gravitational wave astronomy a reality.