18 March 2014 - The BICEP2 Collaboration result, if confirmed, is a landmark discovery in cosmology, allowing us for the first time to peer back almost to the moment of the Big Bang through the observation of the imprint of primordial gravitational waves on the cosmic microwave background. The LIGO Scientific Collaboration congratulates our BICEP colleagues on their accomplishment and will further follow discoveries and implications of these observations with great interest. 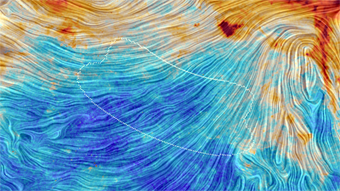 The color scale in this image from the Planck mission represents the emission of dust. The highlighted region shows the position of the sky that was observed with BICEP2 and the Keck Array.
Image credit: ESA/Planck Collaboration