LIGO Lab and LSC release 2 years of data from S5


22 August 2014 - The LIGO Laboratory and the LIGO Scientific Collaboration (LSC) are pleased to announce the public release of two years of data taken by the project's three gravitational wave detectors during LIGO's fifth science run (S5) that occurred from 2005 through 2007.

The LIGO data release comes with detailed metadata, tutorials, tools and software that will help public users perform effective analyses. The release will promote broad participation in the advancement of gravitational wave physics and astrophysics from professional and amateur scientists, graduate students, undergraduates and secondary students. Participants are invited to help improve the quality of LIGO's scientific results, including the verification of results already produced by the LSC.

The LSC has analyzed LIGO's S5 data; no gravitational wave candidate signals were found in the LSC searches. LIGO will release more data sets in future years. Eventually these public releases will include data from the upgraded Advanced LIGO detectors that will begin operating in 2015. LIGO expects that such releases could include gravitational wave signals that have been identified by the LSC. Should regular gravitational wave detections begin to occur, public participation in LIGO data analysis will add an exciting dimension to gravitational wave astronomy. Numerical relativists, relativity theorists, astrophysicists and others will use LIGO data to better understand the dynamics of strongly curved spacetime along with the origins and properties of gravitational wave sources.

LIGO anticipates that data analysis in the LSC will improve as a result of this effort to make releases that the broader community can easily understand and use. The international network of gravitational wave o bservatories continues to move toward a model of shared data analysis; the public release program will facilitate the growth of this global capability.

The LIGO Laboratory is operated by Caltech and MIT for the U.S. National Science Foundation (NSF). The LIGO Open Science Center is supported by NSF awards 1210172 and 0757058. 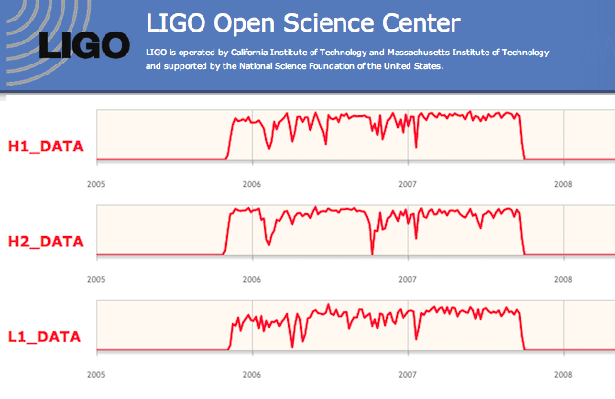