LIGO Partners with the 2012 US Science & Engineering Festival 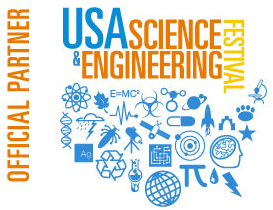 26 July 2011 - The LIGO Scientific Collaboration (LSC) is proud to be an Official Partner of the 2nd USA Science & Engineering Festival to be held in the greater Washington DC area in April 2012.

What is the universe made of? Why did dinosaurs go extinct? What do magic tricks and hip-hop have to with math? What will be the next medical breakthrough? What does baseball have to do with physics? Kids and adults alike will find this out --and more at the 2nd USA Science & Engineering Festival Expo on April 28-29, 2012! Featuring 1500 free, hands-on activities, a Career Pavilion for high-school students and a Book Fair featuring over 30 science authors, the two-day Expo will entertain teens, children and their families, and anyone with a curious mind who is looking for a weekend of fun and discovery.

The LSC will be exhibiting at the Expo giving visitors a chance to immerse themselves in the work of the Laser Interferometer Gravitational-wave Observatory (LIGO), science's cool technology to observe the Universe not through light but through gravity. Gravitational waves - ripples of space-time - were theorized by Einstein almost a century ago. LIGO now pushes the frontiers of science and engineering to try and catch these waves for the first time, and explore the death throes of stars, black hole collisions, even the origin of the Universe in a way humans never have before.

Previously, the LSC has participated in the 1st US Science & Engineering Festival in 2010; the exhibit displayed there is still traveling across the country. Join us again in April 2012 and learn how to become a real black hole hunter!