One of the great open questions in astrophysics is the origin of gamma-ray bursts (GRBs). GRBs are intense flashes of high-energy photons, which are observed approximately once per day, and last only a few seconds. They are the brightest electromagnetic events that we observe in the universe. Typically GRBs are classified into two categories, short or long, based on their duration and spectral hardness. Short GRBs typically last less than 2 seconds and have a “harder” (more energetic) gamma-ray spectrum. Long GRBs last more than 2 seconds and have a “softer” (less energetic) gamma-ray spectrum. The source of short GRBs is not yet understood, but the current best hypothesis is that they are caused by the collision of a neutron star with either another neutron star or a black hole. The source of long GRBs is generally thought to be the collapse of very massive, rapidly spinning stars resulting in a supernova; these make up the majority of the GRB population.

Gravitational waves (GWs) are “ripples” in spacetime that are produced by the acceleration of mass, predicted by Albert Einstein's General Theory of Relativity. These GWs offer a new way to explore astrophysical sources such as GRBs. Several previous papers have been published by the LIGO and Virgo collaborations, reporting the results of searches for GWs associated with GRBs. In this paper, we use data from the GEO600 detector in Hannover, Germany, along with data from LIGO and Virgo. Including GEO600 in this analysis, with its large duty cycle, enabled us to examine a set of 129 GRBs that had not previously been examined for associated GW signals. We assume no prior knowledge of the signal shape, and use data from two GW detectors (GEO600 along with one of the LIGO or Virgo detectors) to test for signal consistency and reject background events. While most GRBs occur at distances too great for GW observatories to “hear” a signal, only 10% of the GRBs in our sample have well-measured distances.

In our search, we find no evidence for GWs from any individual GRB or from our population as a whole. This implies that none of the GRBs in our sample with unmeasured distances were close enough for us to “hear” an associated GW signal.

The Advanced LIGO and Advanced Virgo detectors are currently being installed and commissioned, and expect to begin initial science runs within the next year. There detectors will have increased sensitive range by a factor of 10 or more. Future searches will see further than we have ever before, and hopefully lead to a direct detection of GWs associated with GRBs. 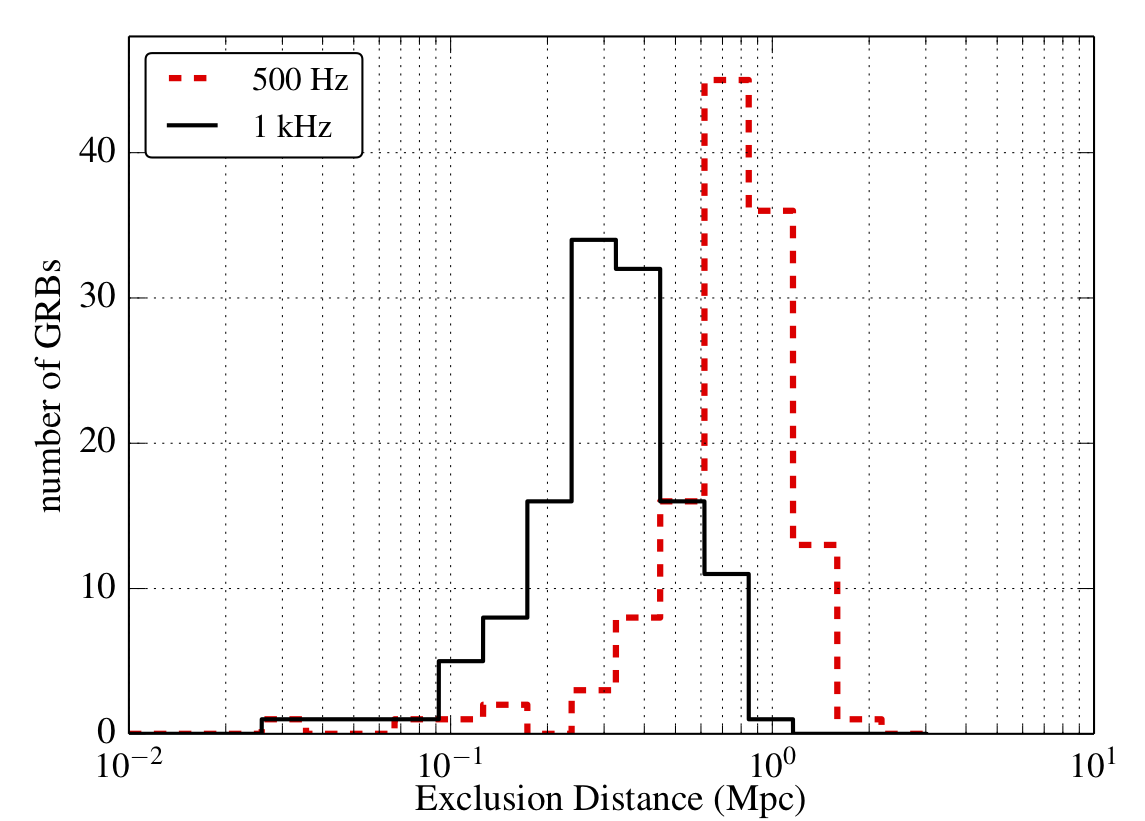 Exclusion distances for 500 Hz and 1 kHz generic GW burst waveforms for 129 GRBs. An optimistic total emitted energy in GWs of 1% of the rest mass enegery of a star with the same mass as our Sun is assumed. 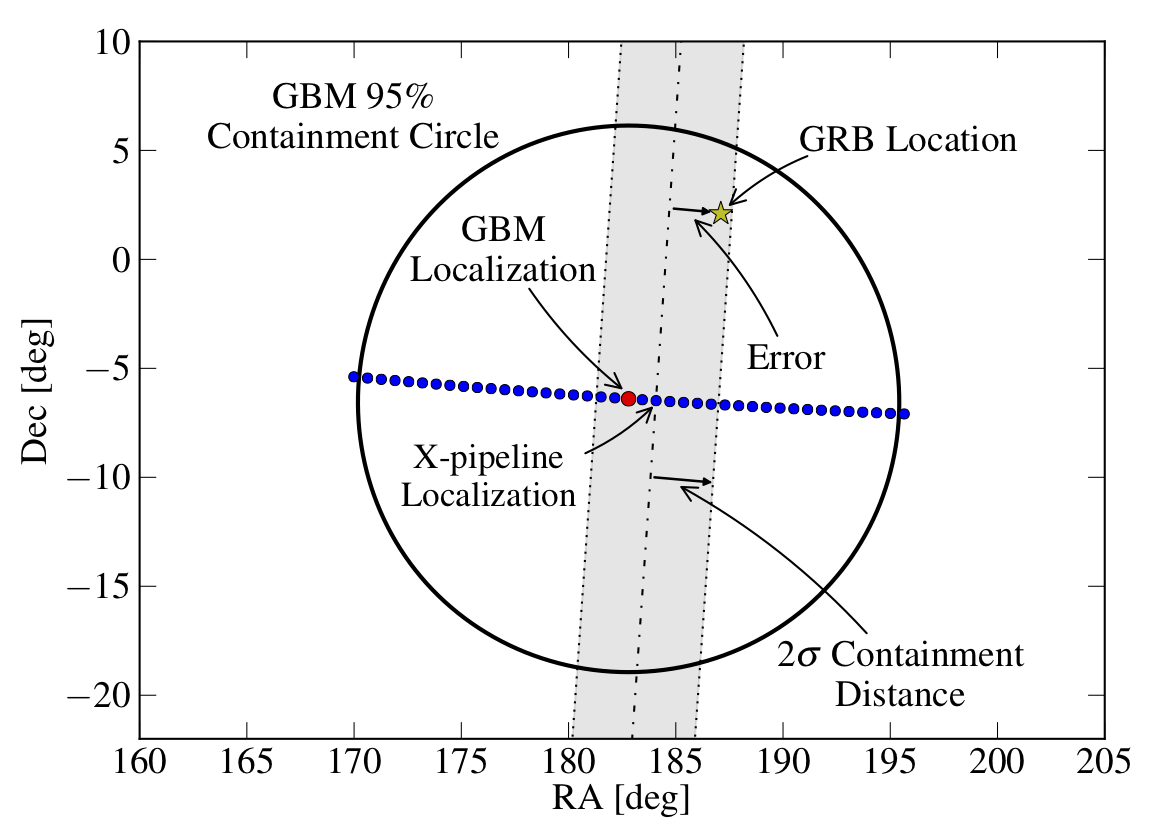 Sky position reconstruction using the linear search grid. The X-Pipeline analysis will localise a detected GW signal to the point on the linear grid closest to the true injected signal, within errors due to noise fluctuations. The containment distance is a function of the frequency and duration of the GW signal, and can be empirically measured for each GRB as part of the GW analysis pipeline; no additional processing time is required. In this example, the 2σ containment distance is about 2.5°. The coordinates of the shaded region can be disseminated to EM astronomers for follow-up by wide-field telescopes.