Calibration is what enables scientists to convert the detector output to the amount of arm length difference changes (a measure of the strain of the passing gravitational wave). When a gravitational wave is sensed by the detector, the arm lengths change by only about 1×10−19 m (one ten-thousandth of the diameter of a proton), so the detector calibration has to be at least that precise. To achieve this level of sensitivity, the Advanced LIGO detectors are carefully managed by a variety of feedback control loops. These control loops keep the detectors in a state where they are able to detect passing gravitational waves. The most important of these control loops is the one that holds the difference of the lengths of the interferometer arms steady. Scientists construct a sophisticated computer model of the detector behavior and many measurements of the detector's characteristics are used as inputs to the model. The measurements also inform scientists about the uncertainty in the detector output that can influence the reconstruction of the parameters of GW150914 or similar events. To make accurate and precise measurements of parameters like black hole masses, it is therefore essential to make the most accurate and precise calibration as possible.

A key tool in the calibration procedure is the use of an additional laser that is directed onto an end mirror of each detector. The laser varies in power, causing a variation in the force (from the recoil of photons) it produces on the mirror surface. This is called a "photon radiation pressure actuator". The force on the end mirror causes the mirror to move from its equilibrium position by a known amount. The Advanced LIGO detectors sense this induced length variation of the interferometer arms. These length variations are tinyâat the same scale as those of the passing gravitational waves, about 1×10−19 m. It is remarkable that the force caused by the photons from a small, one-watt laser beam is able to move a 40 kg (88 pound) mirror by an amount that is easily measurable by the LIGO detectors!

Near the time of GW150914, the Advanced LIGO detectors were calibrated by making detailed comparisons between the computer models of the detectors and the actual responses of the detectors to the photon radiation pressure actuators. Scientists established an overall level of uncertainty of less than 10% in the wave amplitude and 10 degrees in phase. The eventual goal is to reduce the uncertainties of the calibrated detector output so that, with further refinements and improvements to the calibration model, the measured astrophysical values will not be limited by the calibration uncertainties.

For more information on the meaning of these figures, see the preprint at http://arxiv.org/abs/1602.03845. 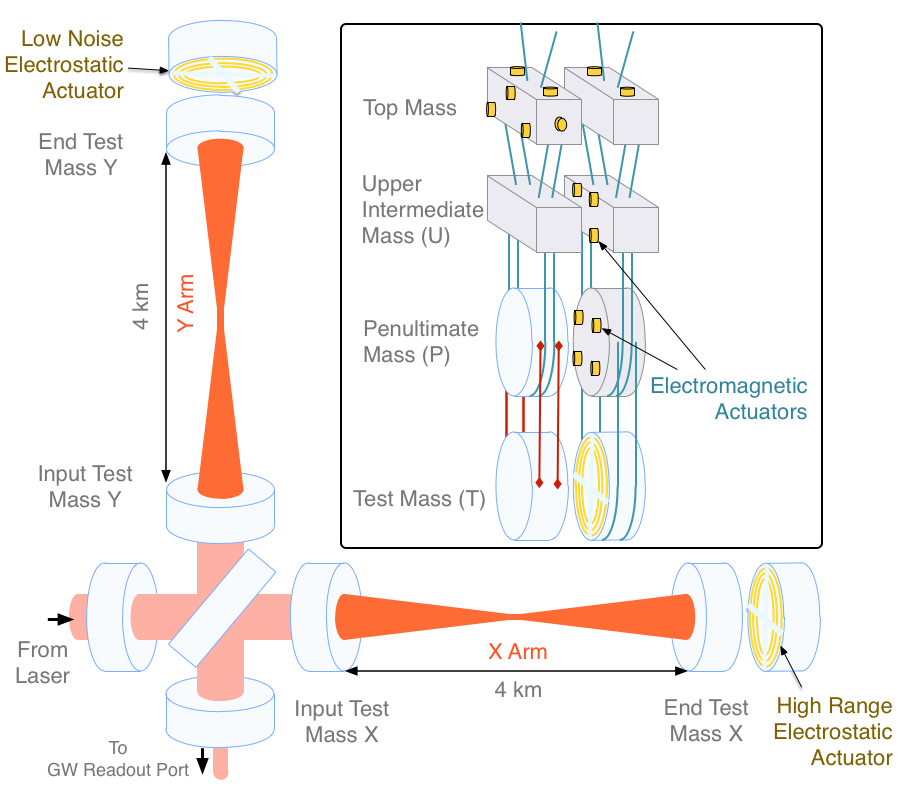 Simplified diagram of an Advanced LIGO interferometer. Four highly reflective test masses form two Fabry-Perot arm cavities on the Earth, in the horizontal plane. At lower left, a power recycling mirror placed between the laser and the beamsplitter increases the power stored in the arms to 100 kW. A signal recycling mirror, placed between the beamsplitter and the GW readout photodetector, alters the frequency response of the interferometer to differential arm length fluctuations. For clarity, only the lowest suspension stage is shown for the optics. Inset: one of the dual-chain, quadruple pendulum suspension systems is shown in the vertical plane. 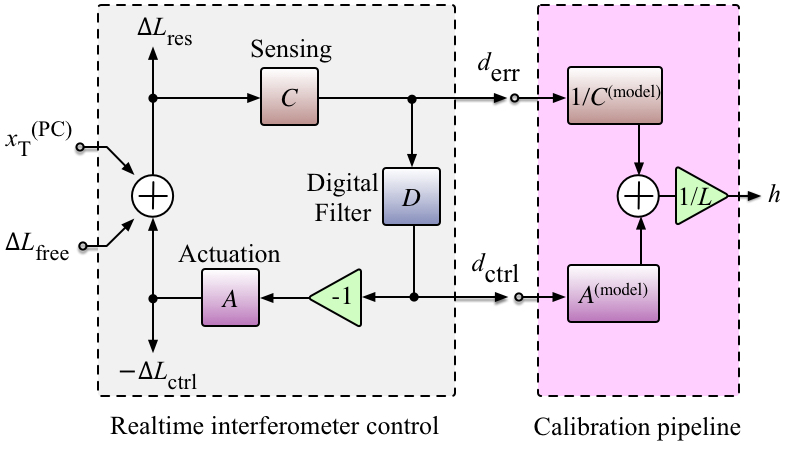