How do we know GW150914 was real? Vetting a Gravitational Wave Signal of Astrophysical Origin

On September 14, 2015, gravitational waves produced from the merger of two black holes roughly 1.3 billion light years away arrived at Earth. The Advanced LIGO (Laser Interferometer Gravitational-wave Observatory) detectors observed the tiny fluctuations that stretched and squeezed spacetime produced by these gravitational waves. To make this unprecedented measurement, we first needed to verify that the signal we measured could not have been produced by something non-astrophysical. Ensuring that the data we analyzed were of high quality and free from such contamination was essential to making this detection.

How does a LIGO interferometer work?

The Advanced LIGO detectors are 4-km long L-shaped interferometers. Laser light is split by a 50% reflective mirror called a beam-splitter to travel down two perpendicular paths, each continuing 4 kilometers down the arms of the L-shaped instrument. The light bounces off mirrors at the ends of each arm, returns back along the two arms, and combines back together at the beam-splitter. We can tell how aligned the two combined light waves are, or how much further one has traveled than the other, by looking at how the two light waves add together, or interfere. This interference pattern, or shape made by the sum of two or more waves, is measured by a light sensor. If a strong gravitational wave passes, the stretching and squeezing of the interferometer will change the relative length of the two arms and the light sensor will observe a signal in the interference pattern.

There are two detectors in the United States: one in Hanford, Washington and one in Livingston, Louisiana. The Hanford and Livingston detectors are both outfitted with the same instrumentation, making them almost twins. They have been recently upgraded with state-of-the-art equipment so that they are now able to detect a change in the distance between the two 4-kilometer arms of just 10-19 meters, less than one thousandth the size of a proton. This is equivalent to measuring the change in distance between the Earth and our nearest star (Proxima Centauri) down to the width of a strand of hair.

As you may expect, being able to measure such tiny changes in distance means that the LIGO detectors are also very sensitive to other disturbances, collectively referred to as "noise". For example, a bump to the table that the laser is mounted on could cause a blip in the detector data, or a nearby lightning strike may generate a magnetic field disturbance that could leak into the detector data through electronics or wiring. A hardware fault might also produce fluctuations that could contaminate the data.

Since the detectors are located in different environments, they are affected by different sources of external noise. For example, the Livingston detector experiences much more ground motion generated by waves in the Gulf of Mexico and the Atlantic ocean. The Hanford detector experiences many more days of strong, gusty winds that shake the earth and the buildings housing the detector. Turbulent environmental conditions impact whether the detectors can record clean data.

An important job of the LIGO collaboration is to identify and reduce or eliminate any noise that pollutes the data which would contain gravitational wave signals.

Monitoring Noise in the LIGO Detectors

At each detector, there are thousands of sensors which monitor the local environment (measuring things like vibrations in the ground and air) and track detector behavior (recording things like the laser power or how much force is used to keep the optics steady). Over 200,000 of these additional auxiliary measurements provide complete coverage of each detector and its environment.

To understand the effect of environmental noise on the detectors, we then artificially introduce possible sources of data contamination -- such as loud sounds, ground shaking, or magnetic fields -- at different locations throughout the LIGO sites. We then measure how the data changes due to these known sources of noise. These tests allow us to understand how much various environmental effects could contaminate our gravitational wave data. An example of a magnetic field test is shown in Figure 1.

To claim a gravitational wave detection, we need to take enough data to calculate how often the signal we measured could be produced by a random coincidence in background noise. In the case of GW150914, we needed the equivalent of 16 days of both detectors operating as expected at the same time. Since the detectors did not operate continuously in the required configuration, it took from 12 September 2015 to 20 October 2015 to collect enough data for the analysis of GW150914. While collecting this data, we kept the detectors as close as possible to the configuration they were in when GW150914 arrived. However, there were some instances of additional noise due to hardware issues and environmental changes such as weather. During the full data collection period, we identified any data which would be contaminated by excess noise by the auxiliary measurements of the detectors and their environment, and removed it from our analysis. These "vetoes" resulted in the removal of 4% of Hanford's recorded data and 1% of Livingston's recorded data.

The typical sensitivity of the LIGO detectors during this period is shown in Figure 2. The shaded region show the variation in sensitivity, and the narrow range of variation shows that the detectors were operating stably while we collected data used for our analysis.

At the time the signal arrived, very early in the morning at both sites, the detectors were both operating normally and exhibiting low levels of noise. As soon as GW150914 was identified as a candidate gravitational wave signal, we performed a rigorous series of checks and investigations to ensure the signal was not caused by detector or environment noise. For example, each of the 200,000 auxiliary measurements at both detectors were checked for any indication that GW150914 might be caused by a noise artifact and all checks came back negative. In particular, no sensors which monitor the local environment indicated strong enough disturbances to produce a signal in the gravitational wave channel anywhere near as strong as GW150914.

At the time of GW150914, the LIGO detectors were operating in a low-noise state with normal levels of environmental and instrumental noise. The detectors were stable throughout the analyzed period. Careful analysis of auxiliary measurements let us remove any data that was contaminated by instrumental or environmental noise. Since the data used for our analysis was of high quality, we were able to estimate that accidental noise coincidences would produce an event like GW150914 less than once every 203,000 years!

Additionally, thorough investigations found no evidence that environmental influences or detector noise at either LIGO site might have caused GW150914. A detailed study of environmental influences conclusively ruled out all sources of a signal being measured in both detectors at the time of the event, except for a binary black hole gravitational wave signal. 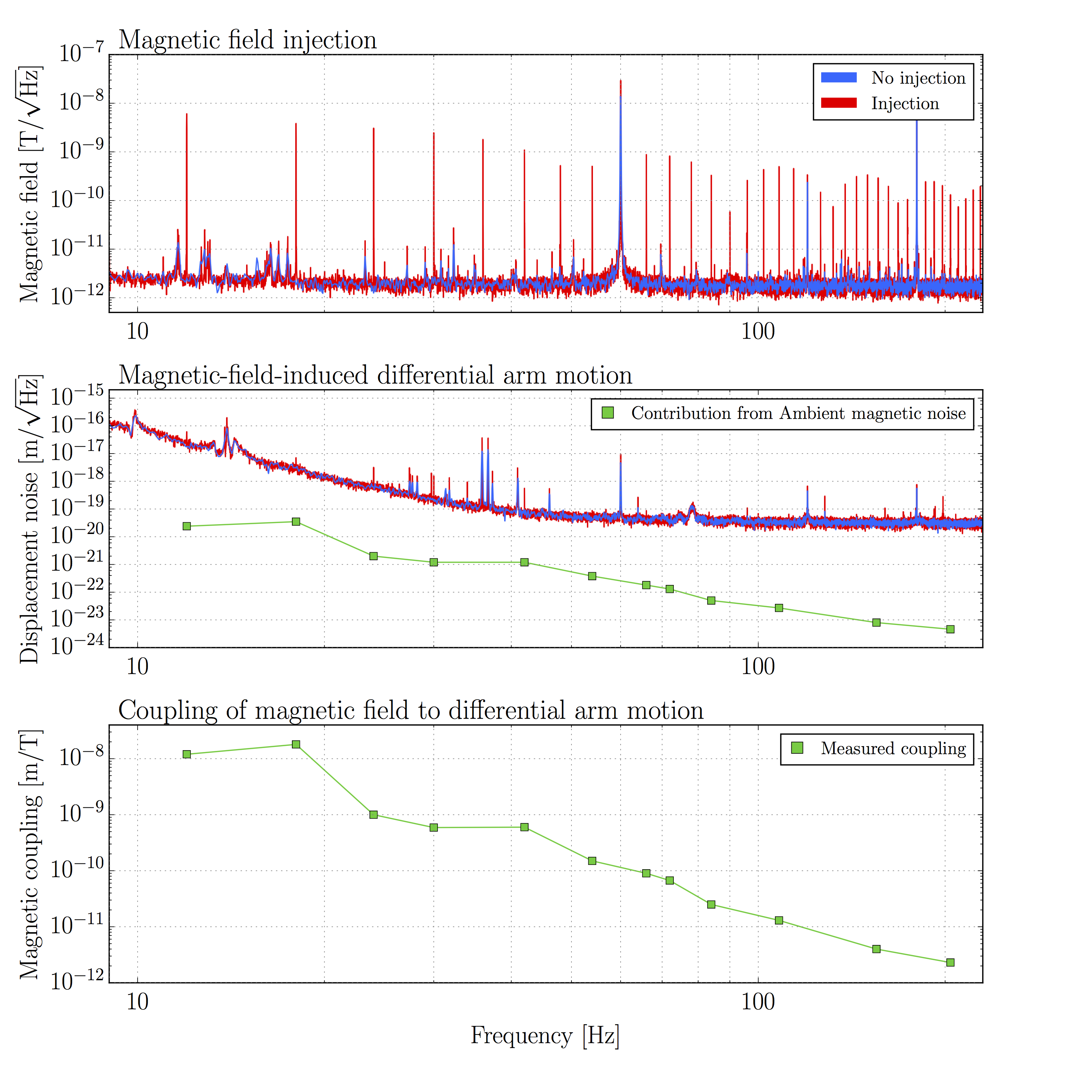 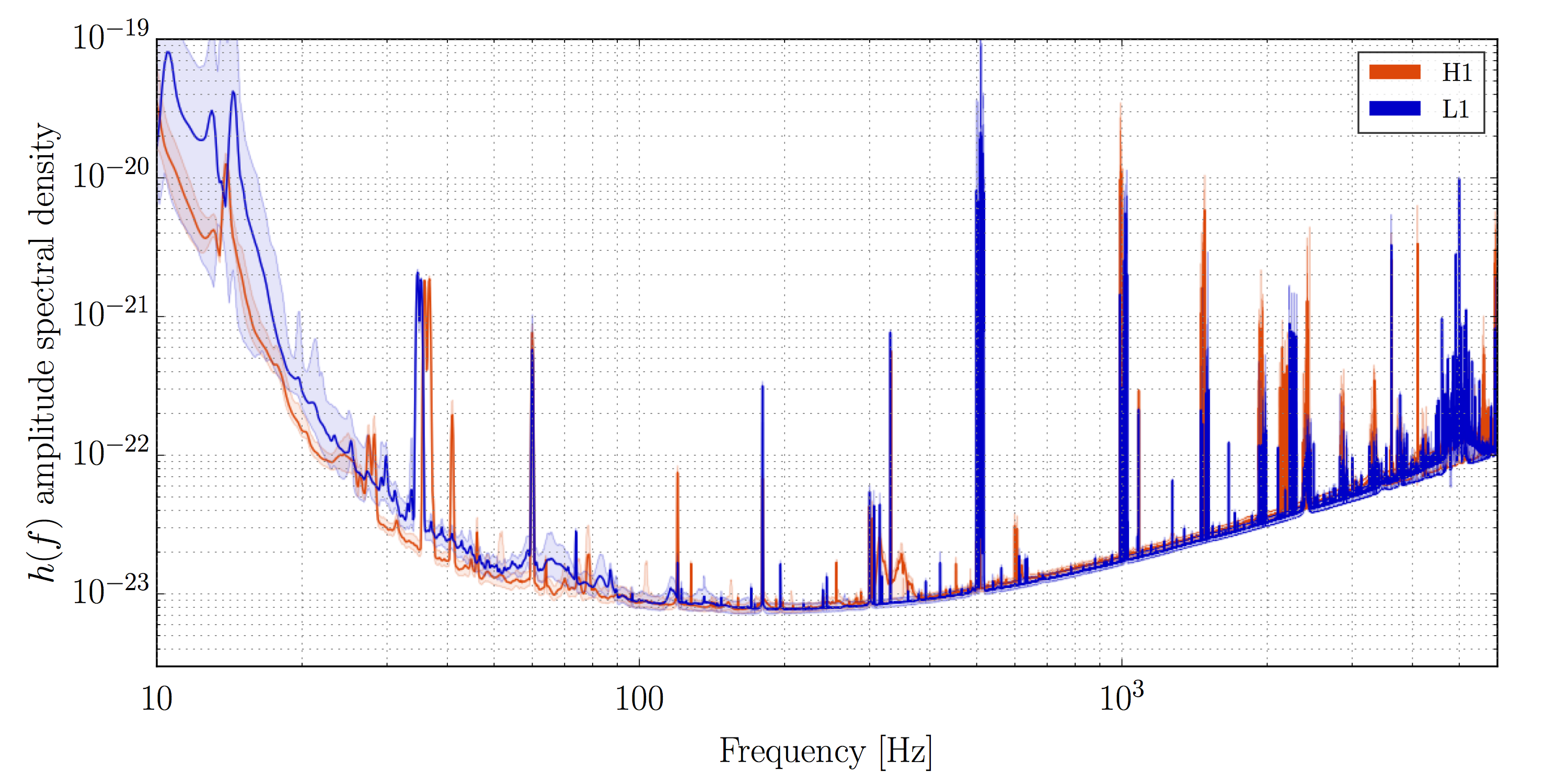 Figure 2: The solid curves show the typical (median) level of background fluctuations in the LIGO-Hanford and LIGO-Livingston detectors, as a function of frequency, during the analysis period between 12 September - 20 October 2015. The shaded region shows the range of variation over that time period (from 5th to 95th percentile).