In February 2016 LIGO announced the first-ever direct detection of gravitational waves from the merger of a pair of black holes. This detection, which we call GW150914, also represents the first direct observation of black holes and the first evidence that two black holes can collide and merge. In order to learn as much as possible about the black holes and their environment, we also searched for signals other than gravitational waves that could be associated with the collision, specifically electromagnetic waves and neutrinos. This article will focus on the search for neutrinos coincident with GW150914.

What are neutrinos, and what do they have to do with merging black holes?

Neutrinos are tiny particles with no electric charge which are produced naturally by exploding stars (supernovae), the Sun, cosmic rays crashing into Earth's atmosphere, and the decay of radioactive elements, as well as by artificial sources such as nuclear reactors and particle accelerators. Recently, high-energy neutrinos of unknown astrophysical origin have been detected. One possibility is that these neutrinos are emitted from the regions around black holes. Black holes devour nearby gas or dust in a process known as accretion. During that process, some of the infalling particles can escape and leave the black hole's environment at very high speeds. Energetic neutrinos can be produced in these fast-moving outflows, carrying away critical information about the black hole and its environment (see Fig. 1). While we expect that most black hole collisions are not surrounded by enough gas to produce detectable neutrino emission, we could detect a signal if the merger happens close to the center of a galaxy. The only way to test these theoretical predictions is to observe events like GW150914 and see what we find!

How do we detect neutrinos?

Although gravitational waves and neutrinos are very different phenomena, they have one important characteristic in common: once they are produced, they are able to travel through the universe almost completely unaffected by any galaxies, stars, gas, or dust that they encounter along the way. This makes both gravitational waves and neutrinos uniquely well suited to inform us about the astrophysical systems in which they originate. Unfortunately, they also interact very weakly with objects here on Earth, making them notoriously hard to detect! The two neutrino detectors we used for this search work by measuring extremely rare interactions between the neutrinos and molecules of liquid water or ice. (For more information about neutrinos and their detection, see https://icecube.wisc.edu/outreach/neutrinos.) In order to have a good chance of catching any neutrinos, very large detectors are needed. The largest detector in the world, IceCube, is located deep in the ice at the South Pole. Its total volume is one cubic kilometer, which is about the same as the total water use of the United States in a day. The second largest detector, ANTARES, is located in the bottom of the Mediterranean Sea just south of France. Figure 2 shows the two LIGO detectors along with IceCube and ANTARES.

The next step was to determine the direction on the sky from which the gravitational waves arrived and compare it to the direction of origin of the three neutrinos found by IceCube. If the same black hole collision produced GW150914 and one or more of the neutrinos, the signals must have come from the same direction on the sky. GW150914 arrived at the LIGO observatory in Livingston, LA about 7 milliseconds before it arrived at the observatory in Hanford, WA. Because gravitational waves move at the speed of light, this slight delay helped us reconstruct where the waves originated on the sky. A more detailed analysis produced the region outlined in red in Fig. 3. Comparing this region to the origins of the three IceCube neutrinos (also depicted in Fig. 3), we see that there is no overlap. This suggests that the agreement between the arrival time of the neutrinos and the arrival time of the gravitational waves was simply a chance coincidence.

While there was no coincident detection this time, carrying out joint searches for gravitational waves and neutrinos from the most energetic cosmic phenomena represents an exciting new direction for high-energy astrophysics. The next few years will see the global network of gravitational-wave detectors enhanced significantly, as first Advanced Virgo in Italy, then KAGRA in Japan, and later a third LIGO detector in India begin science operations. These additional detectors will significantly improve our ability to locate the positions of gravitational-wave sources on the sky, which will in turn greatly improve our ability to carry out joint searches for gravitational waves and neutrinos. These searches could help us to understand how black holes might be connected to the emission of the highest energy particles that arrive every day from the distant cosmos. 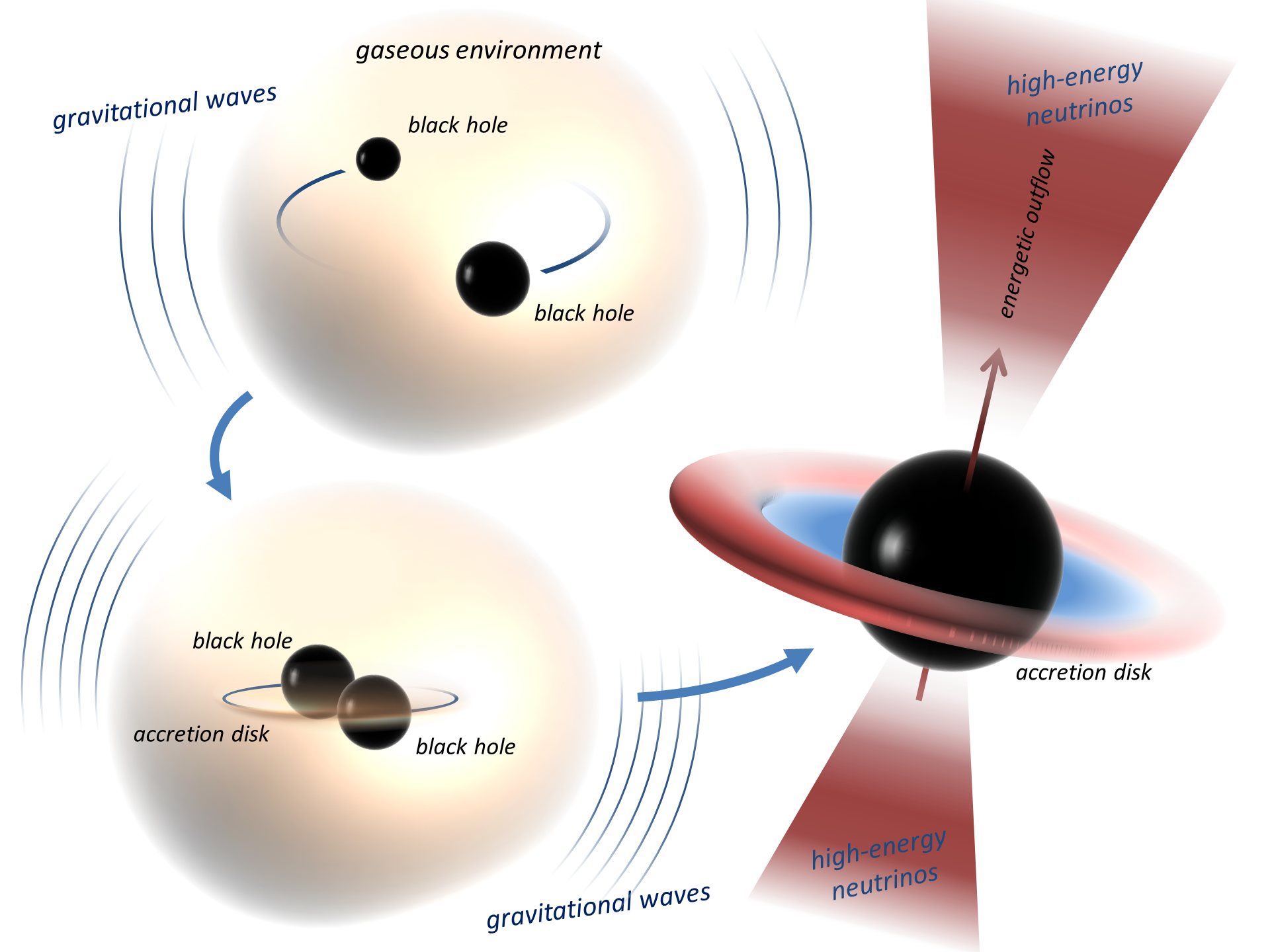 Figure 1: Schematic illustration of the merger of two black holes in a gaseous environment. First, the two black holes are shown orbiting each other, slowly spiraling inward due to the emission of gravitational waves. As the distance between them shrinks, they orbit even faster, emitting stronger gravitational waves at higher frequency. In the meantime, gas can slowly move inward, accumulating close to the black holes. Finally, as the two black holes merge into one, bigger black hole, gas is shown falling into this black hole, forming a so-called accretion disk around it. Some of this matter will escape in energetic outflows, producing high-energy neutrinos. Credit: I. Bartos (2016). 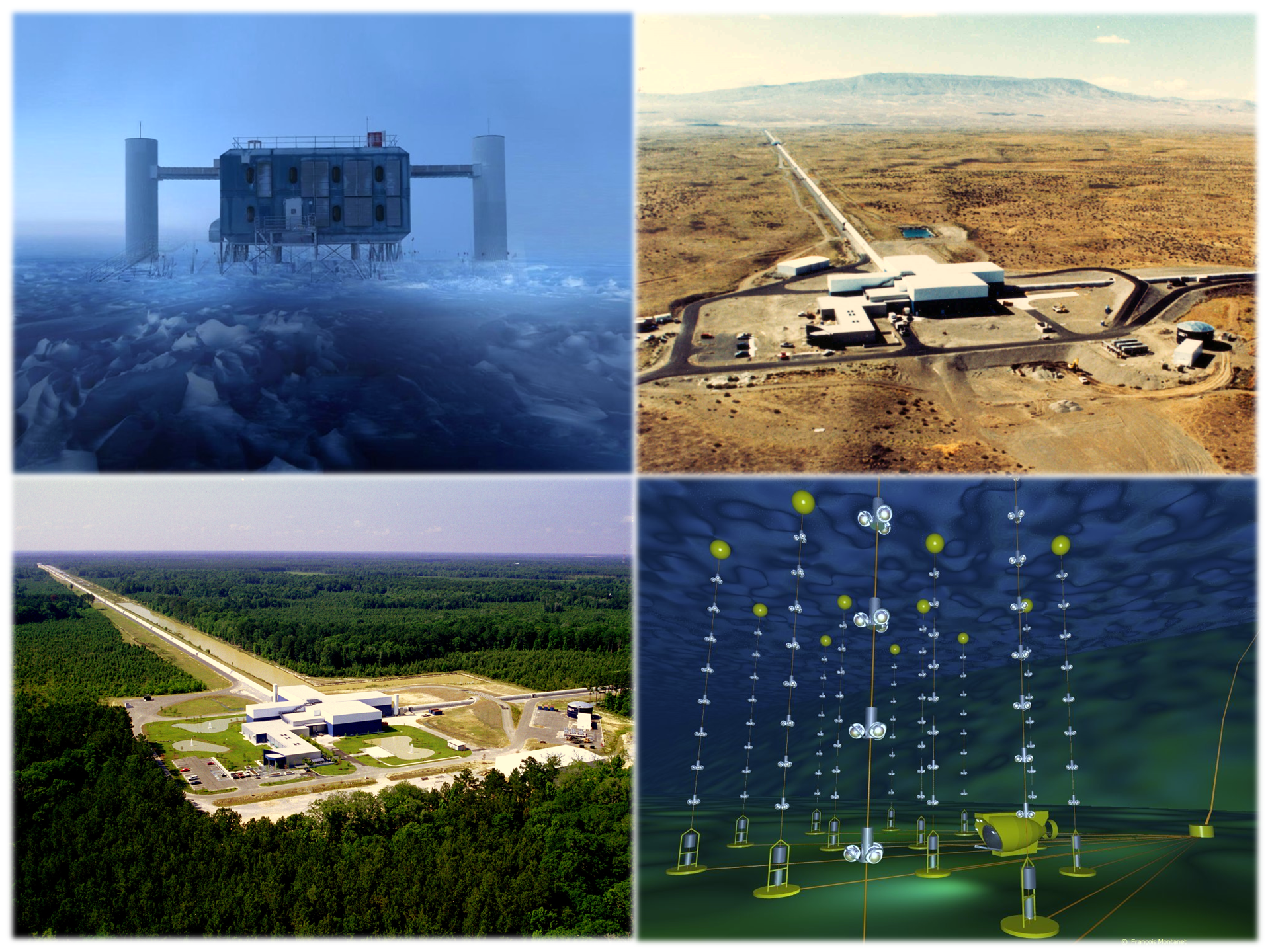