Dated 12 August 2019. Read this summary in PDF format (in English) and in other languages: German .

The gravitational waves which have been detected so far by LIGO-Virgo are caused by merging objects that are either black holes or neutron stars. Most detected events involved two black holes, but one detection, called GW170817, was likely caused by the coalescence of two neutron stars instead. In contrast to merging black holes, the detection of gravitational waves was in this case accompanied by a wealth of regular astronomical observations in all wavelengths from gamma rays to radio waves.

So what can we learn about the behavior of ultra-dense matter from GW170817? For neutron stars orbiting each other, the precise shape of the gravitational-wave signal depends on their masses as well as their so-called tidal deformabilities. The tidal deformability describes how much a body is deformed by tidal forces, which arise when two massive bodies orbit each other. For example, the Earth and Moon orbit each other, which causes tides in our oceans (hence the name tidal force). The deformation of Earth also has an effect on the orbit of the Moon, which has become more distant from Earth over billions of years. In orbiting neutron stars, tidal effects are also at play. Once the stars are close together, shortly before merging, these effects could be strong enough to slightly modify the orbital decay caused by the system's emission of gravitational waves.

Measuring tidal deformability is not easy because the effect on the gravitational wave signal is small and the inherent noise of the detector already makes it difficult to detect the gravitational waves at all. The situation is similar to listening to a radio station so far away that it is almost lost in the static. Even if the static is too strong to make out single words in a song, statistical methods would still allow you to judge how likely it is that a certain song is playing. In this analogy, trying to deduce the tidal effects would be like asking how likely it is that the original version of the song is playing compared to some cover version, a task that gets harder the more similar the two versions are.

In the current work, we took available theoretical models for the equation of state and computed the tidal deformability of neutron stars as a function of mass. Based on these calculations, each equation-of-state model then leads to a slightly different predicted gravitational-wave signal for the merger of two neutron stars. We analyzed the gravitational waves detected in GW170817 and computed how likely it is that each equation-of-state model is correct, compared to the others.

We found that only those equation-of-state models which predict the largest tidal effects are unlikely. For the remaining models, the tidal effects are too small to distinguish. Using only the gravitational wave signal, we cannot distinguish if GW170817 was a merger of two neutron stars or two black holes or the merger of a black hole and a neutron star. However, the simultaneous observations of electromagnetic signals cannot be explained by two merging black holes, and also the masses inferred from the signal are lower than those of any observed black hole.

Besides the tidal deformability, the equation of state also determines how massive a neutron star can be without collapsing to a black hole. This question is relevant for the outcome of neutron star collisions, which results either in a black hole or a single neutron star. The latter can then also collapse to a black hole after a delay. Gravitational waves from the merged object could not be observed with current detector sensitivity. However, the signal from the inspiral phase carries information about the total mass. Using this, we investigated the consequences of each equation of state model for the outcome of the merger. In this way we find that the equation of state models more likely to explain the GW170817 signal predict that the final outcome of the merger is a black hole.

The delay before the formation of a black hole after the merger takes place is important to understand the observation of the short gamma ray burst that accompanied GW170817. One theoretical scenario requires the presence of a black hole surrounded by a massive debris disk in the aftermath of the merger; another a assumes a highly magnetized neutron star intead of a black hole. For the case that the short gamma ray burst requires a black hole, we derived limits on the maximum mass possible for any neutron star. Such limits obtained from gravitational wave astronomy are independent from, and complementary to, existing mass limits known from regular astronomical observations of neutron stars.

With future detections, the constraints on the equation of state will likely become more strict. One reason for this is that similar events with different masses can lead to higher tidal deformabilities, which are easier to measure. Another is that different independent observations can be combined, because the equation of state is likely the same for all neutron stars. Finally, the sensitivity of the detectors has improved since GW170817, which is expected to result in more frequent detections, which will in turn provide the data we need to further our understanding of the equations of state of neutron stars.

For more information on this figure, see the freely accessible arXiv preprint which contains the full analysis and results. 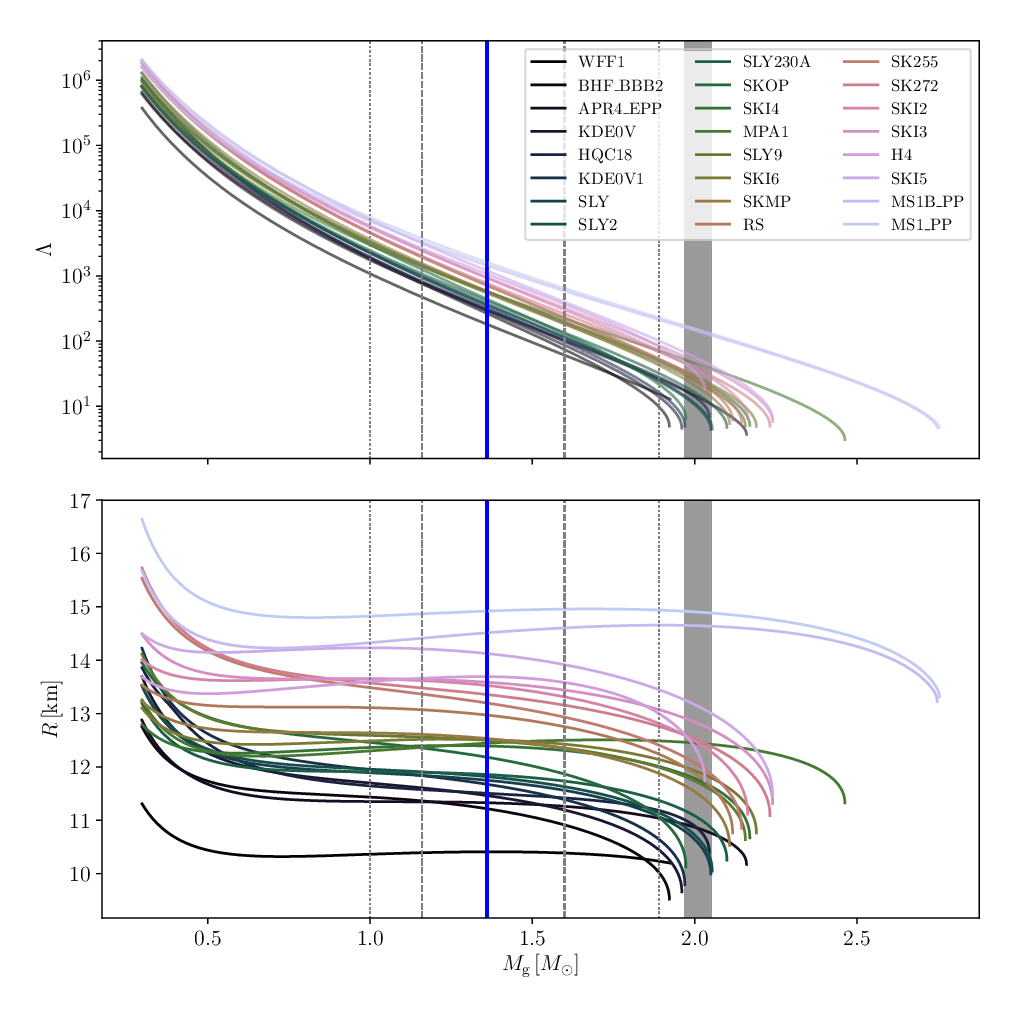 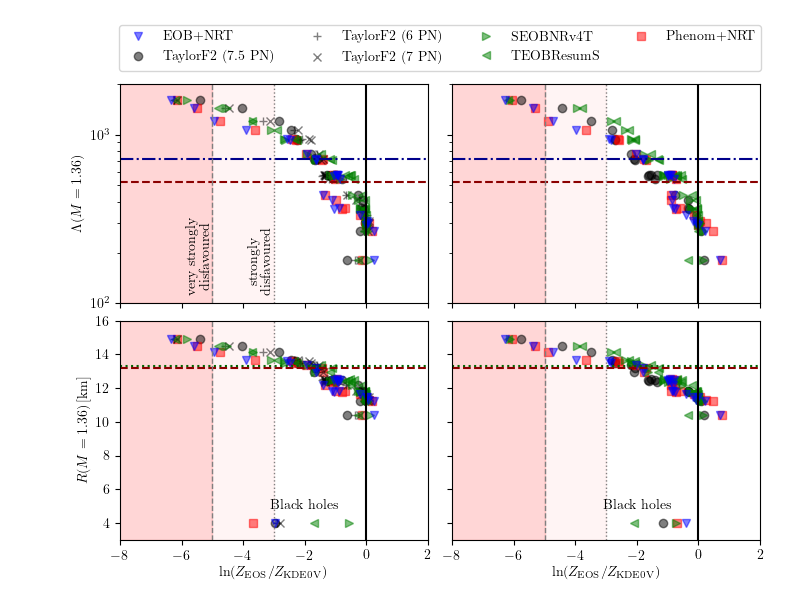 Figure 2: The points in this plot correspond to various theoretical models for the behavior of ultra-dense matter. The position on the horizontal axis corresponds to the probability that the observed gravitational data for event GW170817 was described by a given model, compared to some fixed reference model. From left to right, models become more and more likely. The vertical axis in the upper panel refers to the amount of deformation exhibited by a neutron star with mass 1.36 solar masses in orbit around another massive compact object. In the lower panel, the vertical axis corresponds to the radius of such a neutron star. One can see a trend that models predicting larger, more deformable stars are less likely to be correct. It also shows that many models cannot be ruled out using only the gravitational waves detected during event GW170817.