Searching for the neutron Star or Black Hole resulting from GW170817

Read this summary [in PDF format, in English] and in other languages: German .

With the detection of a binary neutron star merger by the Advanced Laser Interferometer Gravitational Wave Observatory (LIGO) and Virgo, a natural question to ask is: what happened to the resulting object that was formed? The merger of two neutron stars can lead to four ultimate outcomes: (i) the prompt formation of a black hole, (ii) the formation of a "hypermassive" neutron star that collapses to a black hole in less than a second, (iii) the formation of a "supramassive" neutron star that collapses to a black hole on much longer timescales, (iv) the formation of a stable neutron star. Which of these four possibilities occurs depends on how much mass remains in the resulting object, as well as the composition and properties of matter inside neutron stars. Knowing the masses of the original two neutron stars before they merged, which can be measured from the gravitational wave signal detected, and under some assumptions about the compactness of neutron stars, it seems most likely that the resulting object was a hypermassive neutron star, although the other options cannot be excluded either. In this analysis, we search for gravitational waves from the post-merger object, and although we do not find anything, we set the groundwork for future searches when we have further improved the sensitivity of our detectors and where we might also observe a merger even closer to us.

Simulations tell us that the remnant object that results from merging binary neutron stars also emits gravitational waves. In the short term, less than 1 second after the merger, there is an expected gravitational wave signal in frequency range approximately 1000-4000 Hz. The amplitude and frequency depend on the amount of mass that remains after the merger as well as how compact the remnant object is. For this reason, detection of a post-merger signal could provide insight into the properties of the original system that would be difficult to explore in other ways! In addition, there are predictions for long-lived mechanisms which may emit gravitational waves for 100—100000 seconds afterwards. The models that predict these signals are less certain than the shorter-duration models, which means estimates for their detectability by gravitational-wave detectors vary by many orders of magnitude. Because we do not know for certain what emission mechanisms to expect, either short or long, we use different strategies targeting different signal lengths.

How do we search for this object?

For the search, one important benefit from the fact that the binary neutron star merger was a multi-messenger discovery is precise knowledge of where on the sky the merger occurred! In particular, because telescopes detected light from the aftermath of the merger this means that we could significantly restrict the directions in which we had to search for gravitational waves from the post-merger remnant. So instead of searching over many possible positions on the sky, we could use a single sky position for the search, which reduces computational time as well as the chance that our algorithms might mistake noise fluctuations for gravitational-wave candidates. These algorithms are chosen so as to generically look for any sort of signal present in all of the gravitational-wave detectors involved in the analysis; they are not optimized for any particular model of gravitational wave emission, although doing so could improve future searches. Essentially, these algorithms look for patterns in spectrograms: color images of the gravitational-wave data as a function of time, along the horizontal axis, and the frequency of fluctuations measured in the detector, along the vertical axis. In contrast with the chirp from the binary inspiral, the patterns we look for here happen after the merger, with a different shape and at higher frequencies.

We first search for short-duration, high-frequency gravitational waves. This analysis did not detect a post-merger gravitational-wave signal. For longer-duration signals, the idea is similar, though we do not quite probe all possible durations yet: In the longest-duration part of our search, we break up the data from the time of the merger until the end of the observation run into 500 second chunks and search for gravitational waves in each chunk. Hence we call this only an "intermediate"-duration analysis. However, the results were the same: no signal was detected.

What does this all mean?

We can use the fact that we didn't make a detection to place constraints on the amount of energy emitted in gravitational waves from a post-merger signal. We do this by adding fake gravitational-wave signals consistent with the models we are investigating and re-running our analyses, to determine how much energy would have needed to be emitted for us to detect these signals. In general, we were sensitive to energies larger than the original energy of the system, which motivates repeating these analyses with improved algorithms and for events that we observe in the future when the gravitational-wave detectors become more sensitive. Improvements in the algorithms may include using knowledge gleaned from the inspiral detection to better inform us what the post-merger signal may look like, or possibly performing searches that target specific models for the post-merger emission. Searches on even longer time-scales are also planned, that investigate all available data after the merger simultaneously, instead of breaking it into 500 second chunks. 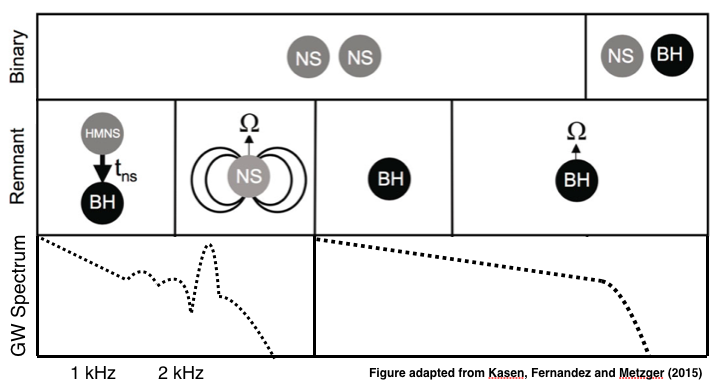 For more information on this figure, see the arXiv preprint which contains the full analysis and results. 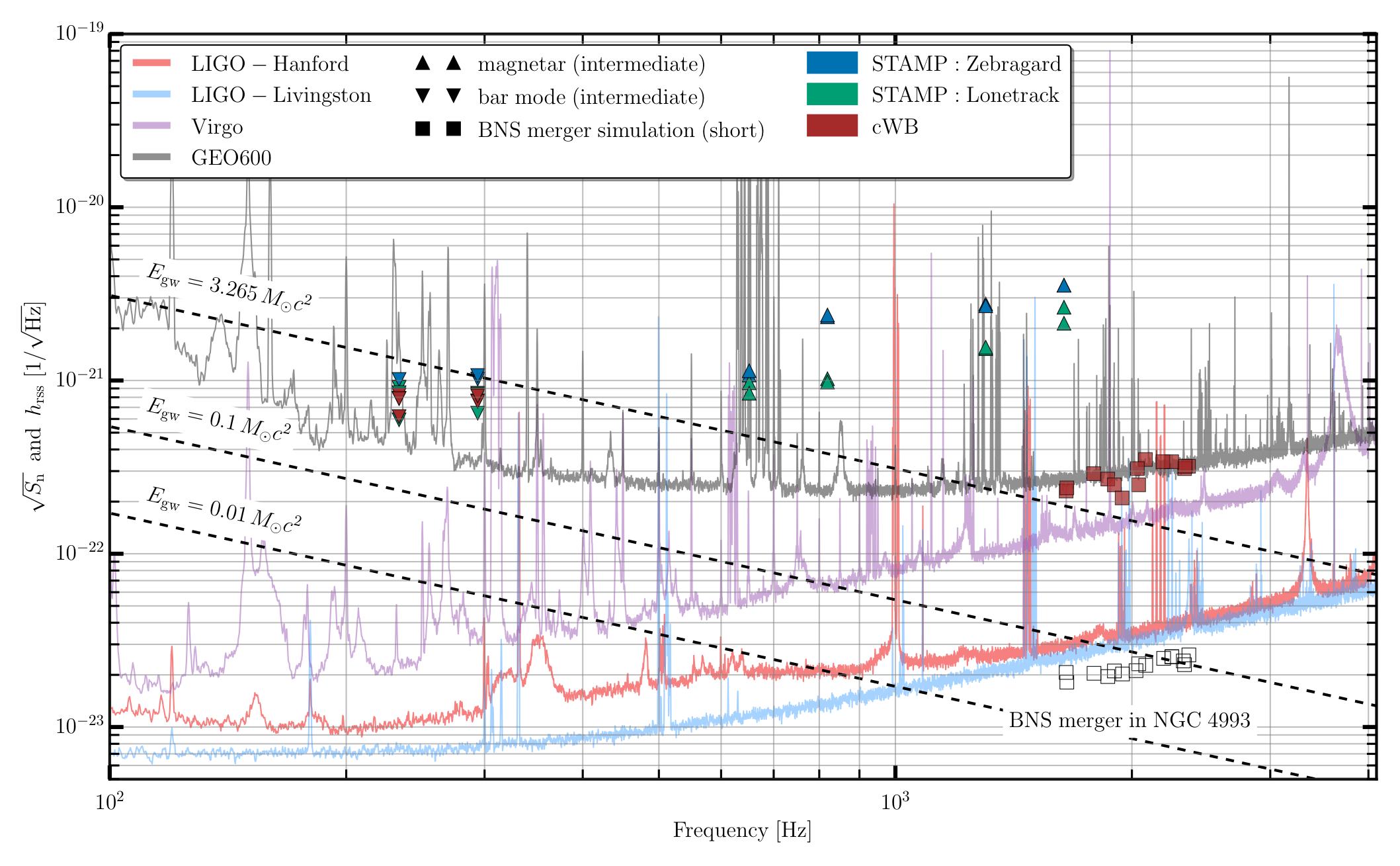 Figure 1: Noise spectrum of the gravitational-wave detectors (solid lines) and the amplitude of gravitational waves required to detect 50% of simulated signals (triangles and squares). The dashed black line corresponds to the physical limit in the parameter space, above which more energy is emitted than in the measured total mass of the binary. Open squares represent realistic model predictions for <1 second long signals.