Another long hard look for a remnant of GW170817

Read this summary [in PDF format, in English] and in other languages: German .

On August 17th, 2017, the worldwide astronomy community made one of the most exciting discoveries in recent history: GW170817, the first multi-messenger observation of two merging neutron stars. As these two stellar-mass ultra-compact objects spiralled ever closer together, during the last minute they emitted a crisp and clear gravitational wave signal picked up by the LIGO and Virgo detectors. After they finally slammed into each other, they also emitted a powerful gamma ray signal, which was detected by the Fermi and INTEGRAL space telescopes. Soon thereafter, a visible light counterpart was discovered by telescopes in Chile, followed by many more observations by ground- and space-based telescopes observing across the entire electromagnetic spectrum.

This unique event has yielded, and continues to provide plenty of novel scientific insights, but an obvious question remains unanswered: what was left behind after the collision? Was the combined mass of the two neutron stars high enough to make the remnant quickly collapse to a black hole? Or did they merge into a new neutron star, heavier than its parents but still stable? Looking for possible gravitational wave signals from a remnant could be one way to answer this question. While a previous analysis didn't detect any gravitational waves signals from the remnant, we have now revisited this question in a recent article by the LIGO and Virgo collaborations, checking the gravitational wave data for any evidence of a long-lived neutron star remnant.

Introduction: What is there to know about the remnant, and why don't we know it yet?

Broadly speaking, four distinct fates are possible for the remnant of GW170817:

The heaviest known neutron star is about twice as massive as our Sun, and it is unclear if an even heavier compact object — like the remnant of GW170817 — can be stable. The maximum allowed mass depends on yet unknown properties of matter at the most extreme densities. So if the merger outcome is too heavy, one scenario is an immediate collapse to a black hole. Second, the remnant can form a short-lived hypermassive neutron star, initially stabilised by the star's interior layers rapidly rotating at different rates. This differential rotation would eventually slow down, causing the star to collapse under the inevitable pull of its own gravity. While some electromagnetic observations seem to favour this scenario, interpreting those observations is complicated, and a clear consensus has yet to be reached among experts. The other options remaining on the table involve a less massive and hence longer-lived neutron star. Such a remnant would also start out rapidly rotating and gradually slow down through emission of gravitational and electromagnetic radiation. Depending on its exact mass and composition, it could eventually collapse to a black hole once it slows down below some critical rotation rate. In this case, we'd call the pre-collapse object a supramassive neutron star. Or it could actually remain stable indefinitely.

To try to determine which, if any, of these scenarios might have occurred, in 2017 we performed and published a first analysis of possible 'post-merger signals' — that is, gravitational waves emitted after the neutron stars had merged. That search focused on short (less than a second long) signals from a hypermassive remnant neutron star, as well as on slightly longer signals up to some hundreds of seconds long that a less massive remnant could produce at the start of its life. Unfortunately, no such post-merger gravitational waves were found. However, this was not unexpected, since LIGO and Virgo are less sensitive at frequencies greater than 500 Hertz — where post-merger signals, especially the short ones, would be strongest — than they are at the few hundreds of Hertz where the 'chirp' from the pre-merger inspiral phase was found.

Since then, we decided to take another long, hard look, this time focusing on longer-duration signals in the supramassive or long-lived neutron star regime, to make sure we did not miss any exciting post-merger signatures. Extending the reach of the previous analysis, we used four new analysis methods dedicated to longer signal durations, starting at the few hundreds of seconds that marked the upper end of the first paper's coverage and lasting all the way up to a week long. (The LIGO detectors collected a good week's worth of data after GW170817 until they were shut off for planned instrumental improvements.)

Searching for gravitational wave signals lasting from hundreds of seconds to several days is a different challenge than most other analyses performed by the LIGO and Virgo collaborations. At these timescales, we have to work with large data volumes with a wide variety of very finely spaced waveform templates (which is the traditional challenge in searches for continuous sources of gravitational waves), while also at the same time having to deal with rapid frequency evolution of expected signals. Moreover, we predict that the gravitational waves from a spinning-down individual neutron star — even if it is newborn, massive, and starting out at very high rotation rates — will be very weak and hence difficult to dig out of the detector noise. An additional complication is that our signal models for these kinds of signals are not perfect, so that the form of any actual signal might not quite match our waveform templates — so even if we compare with a huge set of templates, we might miss the true signal.

To address this challenge, we employed four different analysis methods. Two of them are 'unmodeled' algorithms, which look for any sort of promising signatures in the detector data during the time-frame of interest, without relying on templates. The other two employ waveform templates based on the expected frequency evolution of a spinning-down neutron star under various assumptions about the relative contribution of magnetic and gravitational wave energy losses to its slowing-down. One of the unmodeled methods uses a different configuration of an algorithm already used in the previous shorter-duration post-merger search, but optimized for longer-duration signals. The other three methods are derived from the world of long-duration searches for continuous signals, marking the first time such adaptations of continuous-wave methods to transient signals were used in an astrophysical search of LIGO data.

This combination of four search methods allows us to cover different parts of the expected range of signal waveforms and different timescales within the available post-merger data set (one method covers just 3 hours, two analyse for about a day, and one covers the full data set). Different methods also usually react differently to noise artifacts in the data, so that the combined effort also makes the overall result more robust. Most importantly, where the unmodeled methods ensure that we do not miss a striking signal only because it does not fit the theoretical expectations, the model-based methods ensure a good sensitivity for the expected waveform shapes.

Results: We still have not identified the fate of the remnant of GW170817

We went into this project with a clear expectation that detecting long-duration post-merger gravitational waves from GW170817 was as unlikely as it had been for the shorter-duration signals previously targeted. And indeed, none of the four search methods found a statistically significant detection candidate. Several preliminary candidates were found by three of the search algorithms, but we confidently excluded these after additional study made it clear that they were more consistent with detector noise than with astrophysical sources.

This absence of any measurable post-merger signal can be attributed to a combination of the limited detector sensitivities (especially at high frequencies), the distance of 40 Megaparsec to the source of GW170817, and possibly even to the absence of an actual neutron star remnant (in case it had very quickly collapsed to a black hole).

Before drawing any conclusions, however, we still had to verify that these were indeed the causes of the 'non-detection', and that there were no mistakes in the analysis procedure that would have rendered it insensitive to an actual signal. To do so, we produced many simulated signals according to a specific waveform template model of a spinning-down neutron star. Based on these simulations, sensitivity estimates showed that to be confidently detected, any post-merger gravitational waves would have needed to carry an energy many times larger than the available energy stored in its rapid initial rotation. Or in other words, any GW170817-like event with a realistic energy budget would have needed to originate much closer to Earth — at most 1 Megaparsec — for us to detect it with the current sensitivity of the detectors.

Outlook: What we can do in the future

Although from the start we did not expect to make a detection of post-merger signals, we embarked on this project because in the face of new discoveries, it is always important to check carefully for signatures of the unexpected; and because detecting a post-merger signal promises a lot of information about the physics of matter at extreme densities. Even without a detection, this combined analysis with four different methods has allowed us to establish their individual strengths, and their robustness on data taken after a real merger event. We expect that the improved LIGO and Virgo detectors will find more merging neutron stars in the future. However, even if we get lucky and find new events closer to Earth than GW170817, significant improvements both in data analysis efficiency and — most importantly — detector hardware will be necessary to have a decent chance of seeing any post-merger signatures. When those improvements — especially in the noise level at high frequencies — become reality, our analysis methods are now ready to study the rich physics available in post-merger gravitational waves.

For more information on these figures, see the freely available arXiv preprint of the scientific paper. 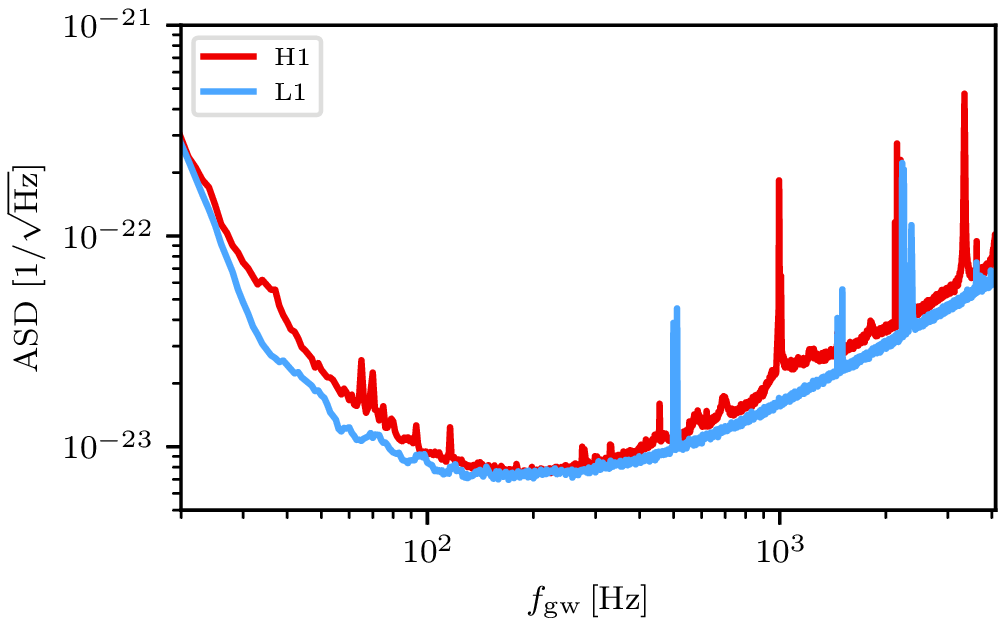 Figure 1a: Sensitivity of the two LIGO detectors around the time of GW170817. (The less sensitive Virgo data was not used in this analysis.) Lower values of a curve correspond to better sensitivity, so we see that at high frequencies — which are important for post-merger searches — the detectors are unfortunately less sensitive than lower down in the spectrum.

Figure 1b: The analysed data ranges from both LIGO detectors, starting with the merger time of GW170817. Time is measured in 'GPS seconds', with 1187008882s corresponding to roughly the merger time of the binary neutron star on August 17th, 2017. Red and blue coloured bars indicate the times when LIGO Hanford or Livingston were online and in good observing condition, while white gaps indicate when no data is available or usable. The grey middle set of bars give the times when both detectors were operating in science-mode together. The dashed lines indicate the end-times of data considered by the four different analysis methods. 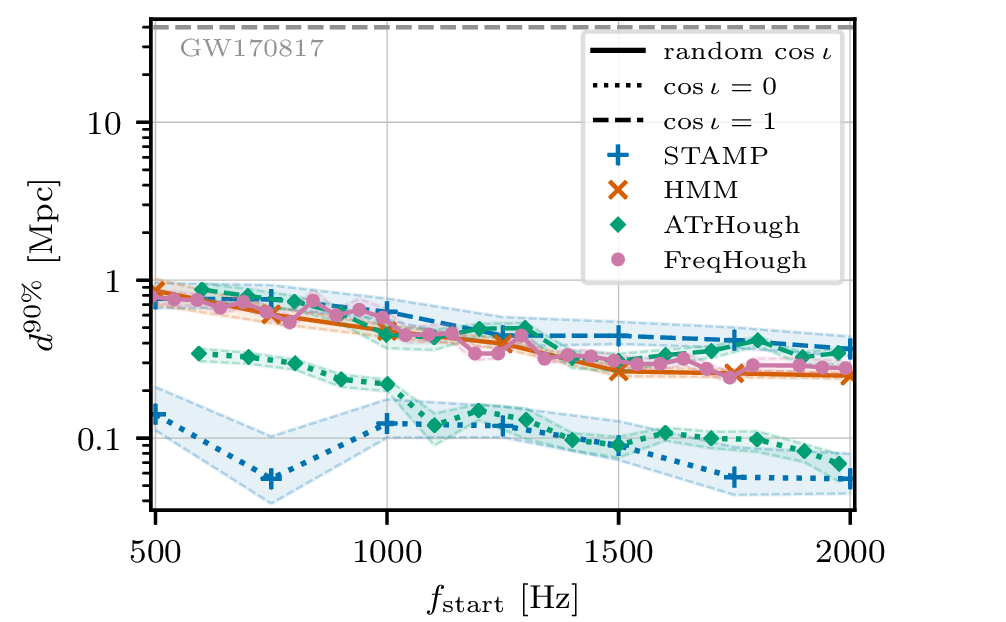 Figure 2a: The sensitive distance measures the largest distance where each analysis algorithm could recover a post-merger signal for an event like GW170817. More precisely, based on recovering simulated signals added to the detector data, at the sensitive distance we expect to recover a post-merger signal 90% of the time. Note that the sensitive distance depends on the frequency at which the remnant begins to emit gravitational waves. All four analysis methods reach their best sensitivities at around 1 Megaparsec, though their behaviour across the whole range of possible signal parameters is quite different. For comparison, the true distance to the source of GW170817 was 40 Megaparsec; this can be seen at the very top of the figure. 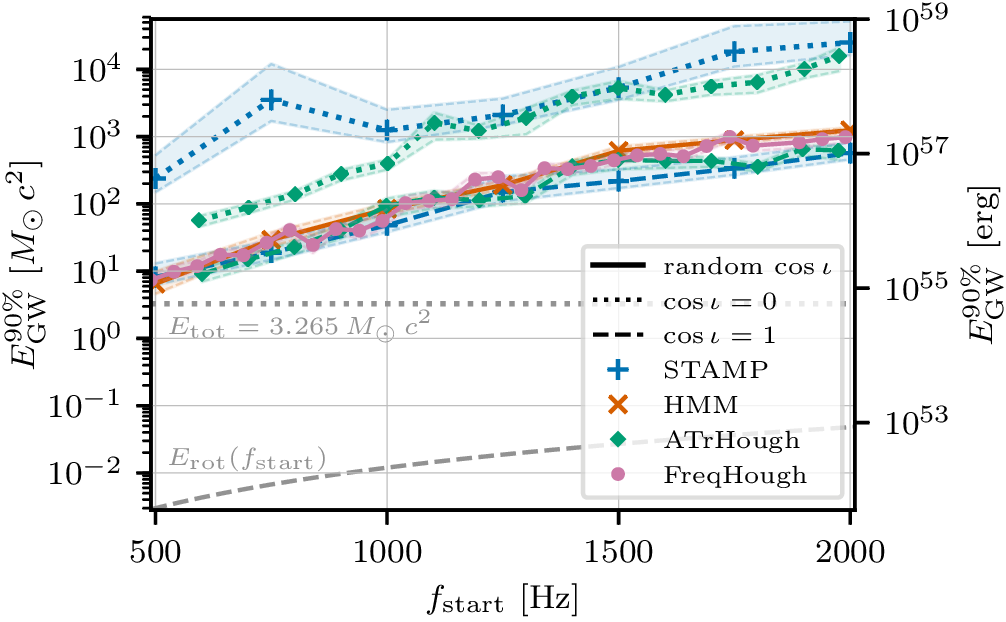 Figure 2b: Upper limits on gravitational wave energy in long-duration post-merger signals from GW170817. These are estimated in the same way and with the same set of simulations as in the 'sensitive distance' figure (2a), but now a lower value of energy corresponds to a stronger constraint. For comparison, a physical energy budget corresponding to the initial rotational energy of a neutron star remnant is shown at the very bottom of the figure. The left-hand vertical axis is in units of solar masses and the right-hand vertical axis in units of erg.