The era of gravitational-wave astronomy began with Advanced LIGO's detection of the binary black hole merger GW150914. Since then, three additional black hole mergers have been observed: GW151226, GW170104, and GW170814. The most recent of these events was jointly detected by Advanced LIGO and Advanced Virgo. On August 17, 2017, Advanced LIGO and Virgo together observed an entirely new kind of gravitational wave source: the collision of two neutron stars. This binary neutron star merger, known as GW170817, promises to teach us a remarkable amount about our Universe. It will help us to test our understanding of gravity, to explore how matter behaves at unimaginably high temperatures and pressures, and even to learn how the heaviest chemical elements come into existence.

Just as a microphone picks up the closest voices, Advanced LIGO and Virgo are most sensitive to black hole and/or neutron star mergers in the relatively nearby Universe. For every such nearby collision, however, there are many more that are too far away to be detected. With our current detectors, none of these distant collisions can be observed individually, but together they combine to create a stochastic background of gravitational waves. And like a microphone picking up the collective murmur of an audience, Advanced LIGO and Virgo may be able to detect this combined stochastic background of distant signals.

What does this all mean?

Second, although the overall volume of the binary neutron star and binary black hole backgrounds are similar, we predict that they "sound" very different from one another. Binary black hole signals (like GW150914) are loud, short, and fairly infrequent. When many such signals are combined, the result is something like kernels of corn popping in a microwave (we appropriately call this a "popcorn" background). Signals from binary neutron stars, on the other hand, are long, quiet, and common, so that multiple signals may blend together at any given instant. The binary neutron star background is therefore much more akin to white noise -- a steady hum without any discernable silences or "pops." We illustrate the difference between these two cases in Figure 3, which shows an example of a stochastic signal due to many distant neutron stars in red and the signal from binary black holes in green. Alternatively, you can listen to an audio example of the combined background.

Beyond the loudest, nearby events in the local Universe, Advanced LIGO and Virgo may also be able to detect a combined stochastic background of more distant gravitational-wave signals. Following the historic first detection of the binary neutron star merger GW170817, we have estimated the strength of the stochastic signal due to other binary neutron star collisions throughout the Universe. We find that the total stochastic signal is stronger than we previously expected, strong enough that it may be detected by LIGO and Virgo in the near future!

For more information on how these figures were generated and their meaning see a free preprint. 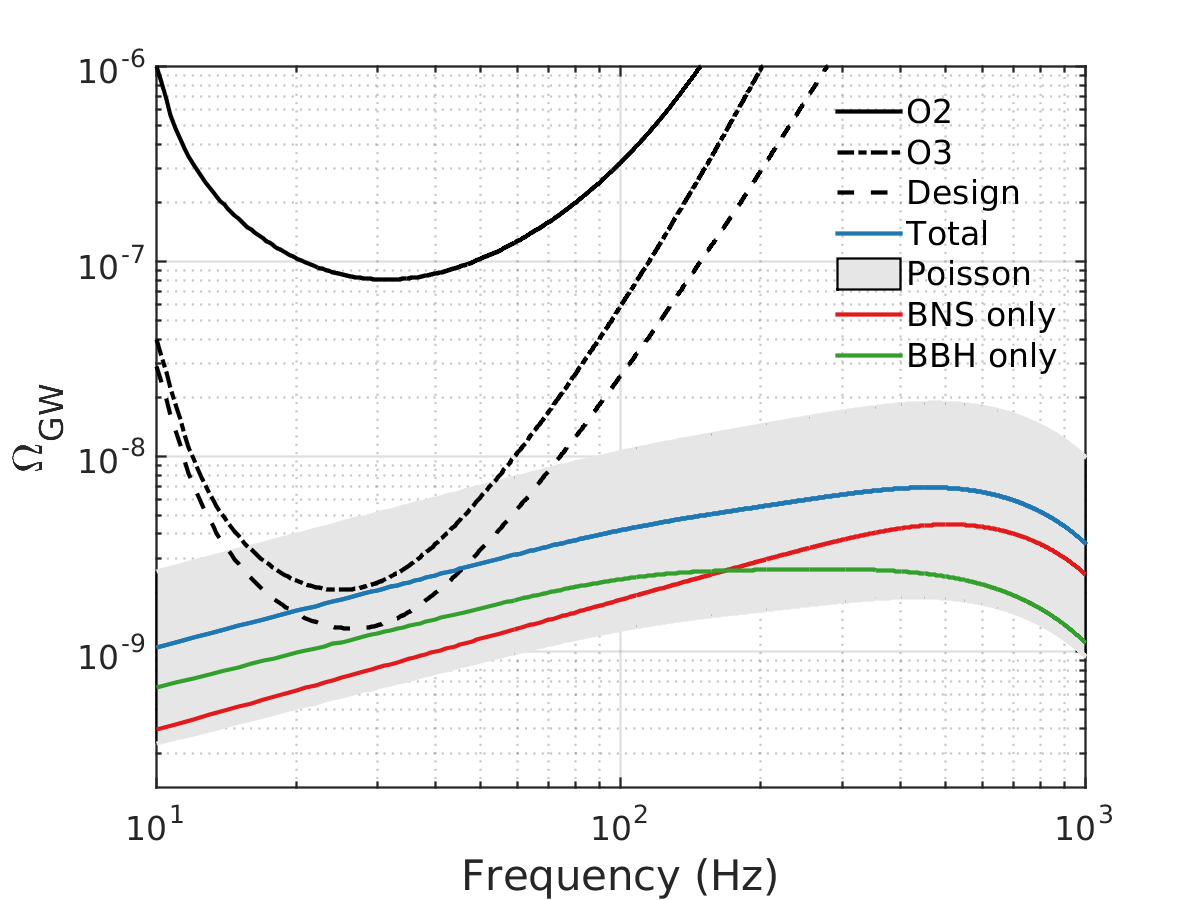 Figure 1: This figure shows the predicted stochastic background from binary neutron stars (red) and binary black holes (green), as well as the combined background from both sources (blue). Because we don't know exactly how often neutron stars and black holes collide in the Universe, though, there is some uncertainty on the overall volume of the background. This uncertainty is represented by the gray band (labeled "Poisson" in the figure legend). We also show the predicted sensitivities of the LIGO and Virgo detectors during the O2 (just concluded) and O3 (in the near future) observing runs, as well as at their final "design" sensitivities. The sensitivity curves for O3 (and beyond) extend far into our "uncertainty band," and even dip below our best prediction for the total stochastic background strength. This indicates that LIGO and Virgo may soon succeed in detecting the combined stochastic background. 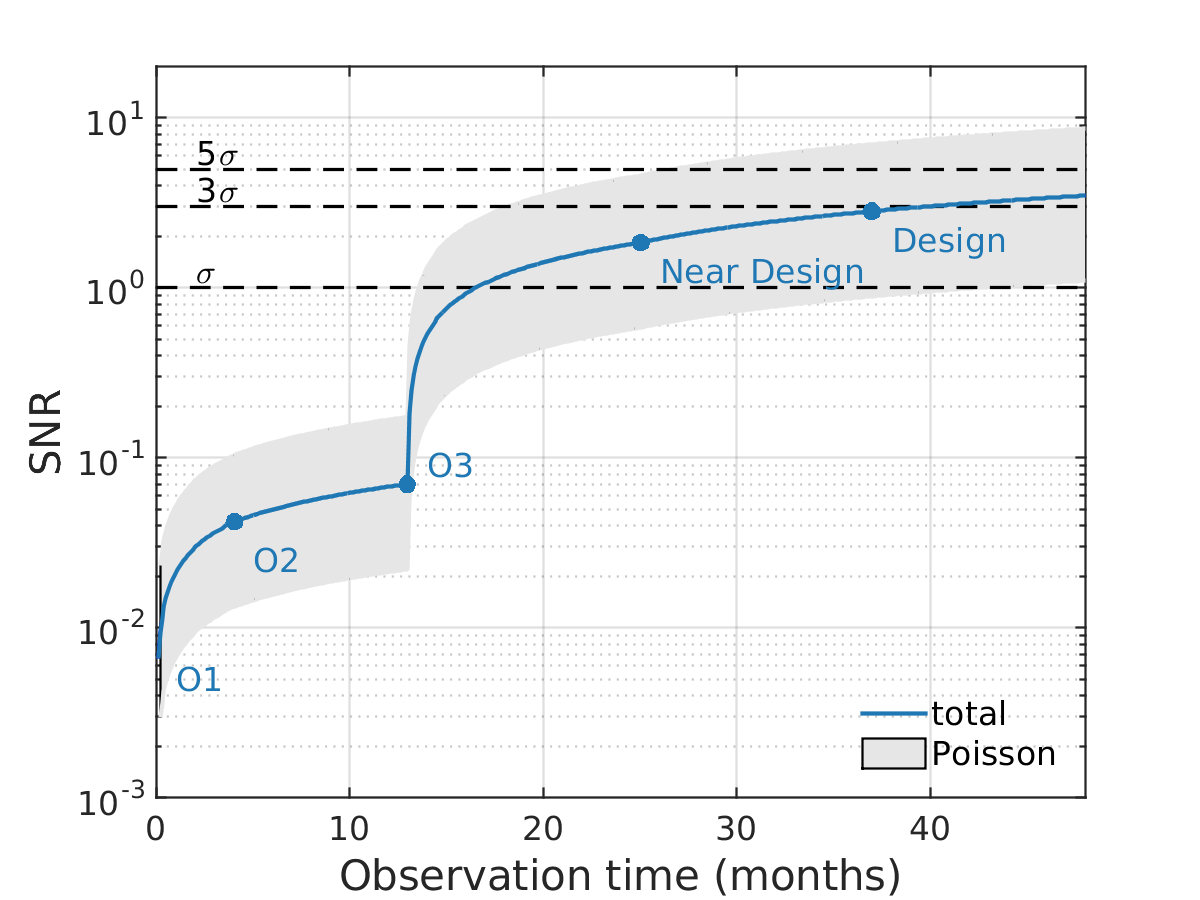 Figure 2: In this figure, we show how signal-to-noise ratio (SNR) of the stochastic background increases with observing time. The SNR quantifies the strength of the detected stochastic signal versus random "noise" in our detectors. As in Figure 1 above, our uncertainty in the strength of the stochastic background leads to the grey "Poisson" uncertainty band shown here. We predict that the total stochastic background is likely to be detected with significant SNR (SNR=3) after about 40 months of observation time, once the LIGO-Virgo network is running at its final design sensitivity (projected for 2022-2024). In the most optimistic case, this background may be detectable after only 18 months of observing time, during the O3 observing run (2018-2019). The markers indicate the beginning of each observing run. 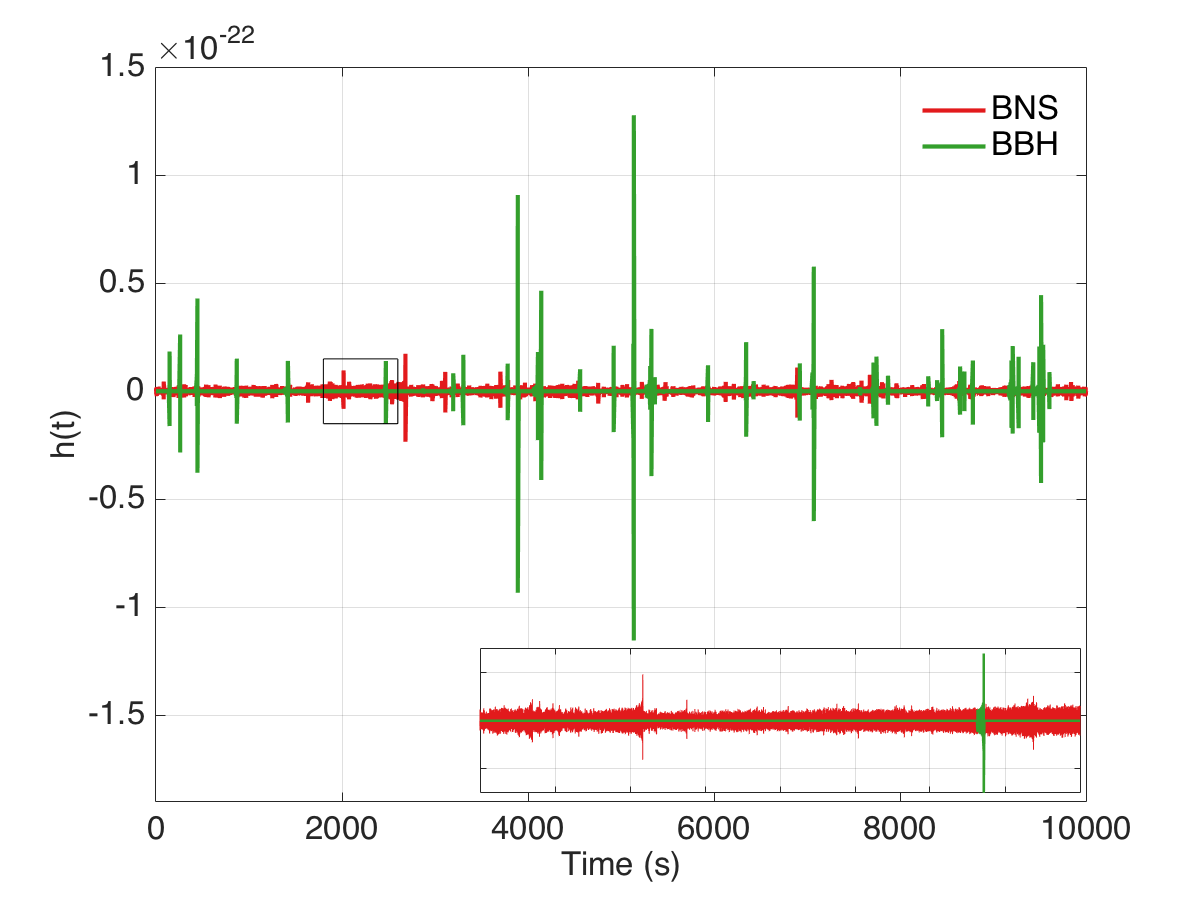 Figure 3: An example simulation of an astrophysical stochastic background signal. The signal from binary black holes is shown in green, while the binary neutron star signal is shown in red. The inset zooms in on a small region from 1800 to 2600 seconds. One can see that binary black holes (green) produce a "popcorn" signal: very short, loud bursts that are cleanly separated from one another in time. The binary neutron star signal (red), on the other hand, contains many overlapping signals, and therefore appears as a continuous band without many loud peaks or dips in strength. It is important to note that this figure shows a simulated example of the kind of signal we might expect; the real stochastic signal is entirely random and so it cannot be exactly predicted in advance. This audio file demonstrates the sound of the combined neutron star and black hole background.