Testing General Relativity in the Presence of Matter

Dated 14 October 2019. Read this summary in PDF format (in English) and in other languages: German .

The discovery of the binary neutron star merger GW170817 has already made a substantial impact on our understanding of astrophysics, cosmology, and fundamental physics. This event has two notable features that make it stand out compared to previous gravitational-wave detections by LIGO and Virgo. First, it is the only gravitational wave signal observed so far that was accompanied by electromagnetic radiation, observed in several frequency bands ranging from high energy gamma rays to low-frequency radio emission. Second, it was emitted by the coalescence of two neutron stars. These bodies differ in the following ways from the black holes that emitted all other gravitational-wave signals detected to date. Neutron stars are less massive than black holes. Their mass is generally expected to be between 1 and 2 solar masses, whereas the stellar-mass black holes observed by LIGO and Virgo were found to have masses 10 or even 50 times larger than that of the Sun. Additionally, in contrast to black holes, which can be considered pure gravity, neutron stars are extended physical bodies with matter structure. At late stages during the inspiral of a binary neutron star, when the two objects are sufficiently close, each neutron star will get tidally deformed by the gravitational field of the other, leading to characteristic imprints in the gravitational-wave signal.

These unique features of GW170817 have allowed us to probe the nature of gravity, the least understood of Nature's fundamental interactions, for the first time with coalescing neutron stars. In this paper, we present insights that GW170817 offered us about fundamental properties of Einstein’s theory of general relativity. The general relativistic theory of gravity, published by Albert Einstein in 1915, treats gravity as a geometric property of space and time; it is a cornerstone of our current description of the physical world. It treats gravity not as a force but as an aspect of the spacetime geometry itself, and spacetime curvature is dynamically coupled to matter and radiation present in the geometry. Despite its successes, general relativity and its predictions have not yet been fully tested, and the theory lacks unification with other fundamental forces of nature. We have performed a battery of tests on GW170817 to check that observations were consistent with a binary neutron star merger in a general relativistic theory of gravity. All our tests have validated the predictions of general relativity.

Assuming general relativity and using numerical and analytical methods, we can precisely predict the orbital evolution during the inspiral of the two neutron stars and construct a model for the emitted gravitational waveforms. To test the evolution of the signal for possible violations of general relativity, we introduce certain modifications in our waveform models. These modifications are independent from any particular alternative theory of gravity; instead, we allow for generic deviations from general relativity in the gravitational-wave phase during the inspiral. Practically, this is achieved by allowing terms of certain "post-Newtonian" (PN) order to vary.

The post-Newtonian formalism is a well-used analytical method that expands Newtonian gravity to include effects of general relativity while modeling the orbital evolution and gravitational radiation of a binary. This approach allows us to express physical quantities like the evolving gravitational-wave phase as a series that adds increasingly complex post-Newtonian terms to the basic Newtonian expression. Compared to a binary inspiral in Newtonian gravity, post-Newtonian corrections are subdued by factors proportional to (v/c)2n. Here, v is the orbital velocity, c is the speed of light and n is the PN order. At 1PN order, for example, it is n=1, providing the first Post-Newtonian correction. Higher PN orders (2PN and above) become increasingly important as the orbit shrinks through the emission of gravitational waves and as the orbital velocity of the binary increases. In general relativity, contributions to the gravitational-wave phase at different PN orders have specific, well-known values, and deviations are expected to be zero.

Certain alternative theories of gravity also permit unique contributions to the post-Newtonian series at "negative" PN orders. These PN orders are entirely absent in a framework of general relativity. To illustrate "negative" PN orders, we recall that the usual 1PN-order contributions (to the binary motion, for example) are subdued by a factor proportional to v/c relative to the Newtonian motion. Contributions at -1PN order, on the other hand, would be enhanced by a factor of proportional to c/v! In an alternative theory of gravity that permits such contributions, additional "negative" PN orders would already become very important for an accurate description of the binary motion and gravitational radiation when the objects are still very far apart (and when the frequency of the emitted gravitational waves is still very low).

We have compared our modified waveform models to the data from GW170718 and have determined the magnitude of deviations from general relativity along with other source parameters like masses or spins. In Figure 1, we present 90% credible upper limits on deviations from general relativity at different PN orders during the inspiral. To increase the confidence in our results, we carried out two independent analyses, using separate methods and different waveform models. These independent results are distinguished by blue and yellow markers in the figure. At each PN order, our limits on deviations are consistent with the zero values expected in general relativity. Additionally, we find no evidence for gravitational dipole radiation, whose emission is prohibited in general relativity but is often predicted by alternative theories of gravity. In such alternative theories, the gravitational dipole moment is expected to leave its imprint on emitted gravitational waves early on in the inspiral of a binary, adding entirely new terms at -1PN order in the phase evolution of the signal (as illustrated above). Our results rule out -1PN-order contributions in the signal and confirm the absence of dipolar gravitational-wave emission.

Looking for higher dimensions in the Universe

We also looked for possible evidence of the existence of higher dimensions in the Universe. In alternative theories of gravity that include extra dimensions (beyond the standard four dimensions of space and time), we expect a gravitational-wave signal that is observed far away from the source to be weaker than the one we would measure in general relativity. This is because gravitational waves are leaking into the higher dimensions, damping the amplitude of the gravitational-wave measurement. This weaker signal would lead to an incorrect estimate for the distance of the gravitational-wave source when we compare our data to waveform models that assume general relativity to be correct. However, we have not just observed gravitational waves from GW170817 but have received a multitude of electromagnetic radiation signals from the merger of the two neutron stars. Optical measurements were able to identify the host galaxy of this merger, providing a measurement of the source distance independent of the data. With this additional information, we were able to determine if there were signs of amplitude damping and leakage in the gravitational-wave signal of GW170817, indicating the presence or absence of higher dimensions. In Figure 2, we present 90% credible upper limits for the number of spacetime dimensions. Shading indicates numbers of dimensions ruled out by the data. These results were obtained with certain assumptions on the process of gravitational leakage. In particular, we have fixed certain model parameters that determine at which distance from the source gravitational waves start to leak into higher dimensions and how abrupt this transition is. With the results we obtained, we can conclude that GW170817 is consistent with the four-dimensional spacetime proposed by Einstein over a hundred years ago.

GW170817 has revealed itself to be entirely consistent with a binary neutron star merger in a general relativistic theory of gravity. General relativity passes another set of challenging tests!

For more information on these figures, see the freely accessible preprint on the arXiv. 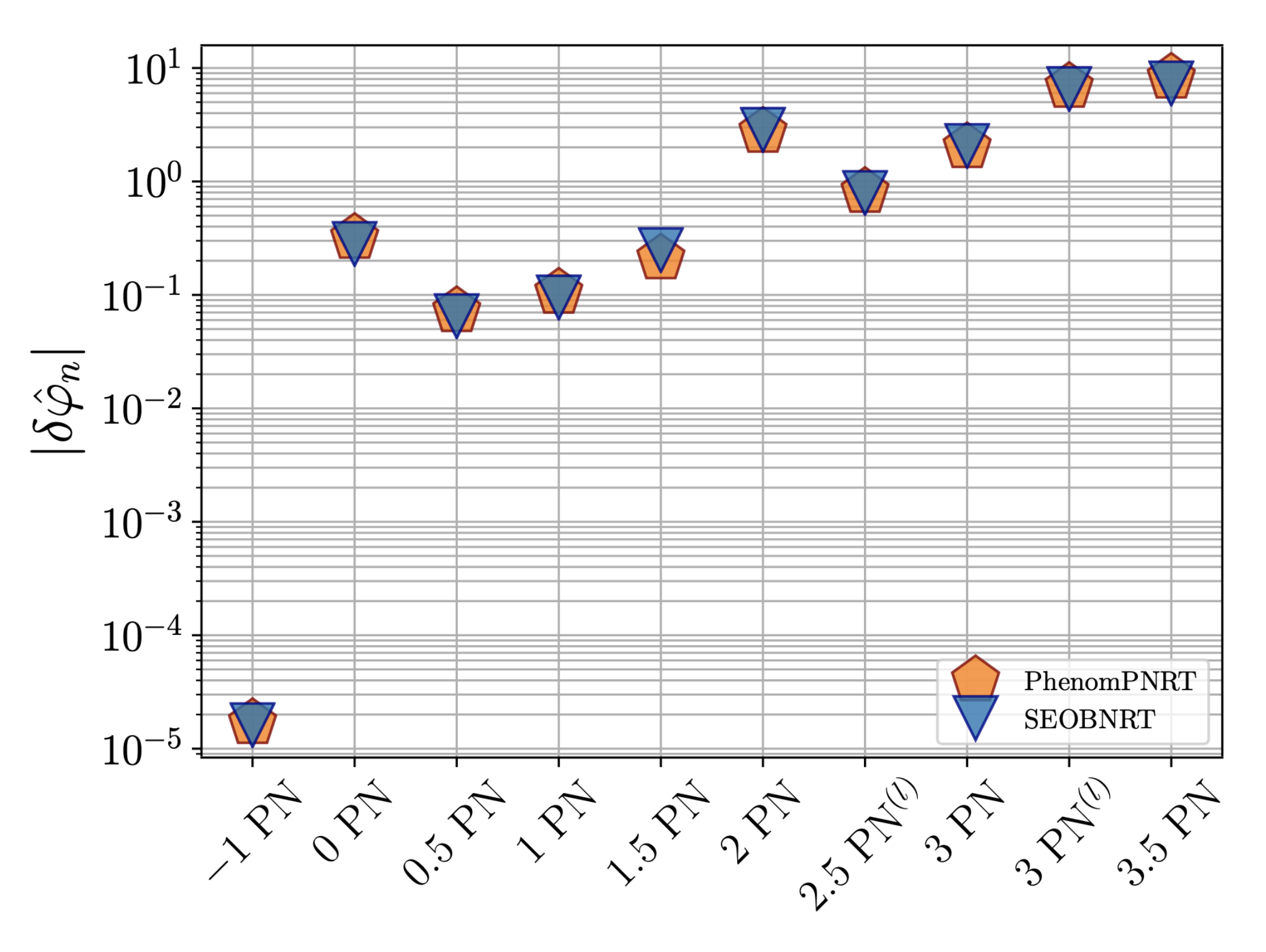 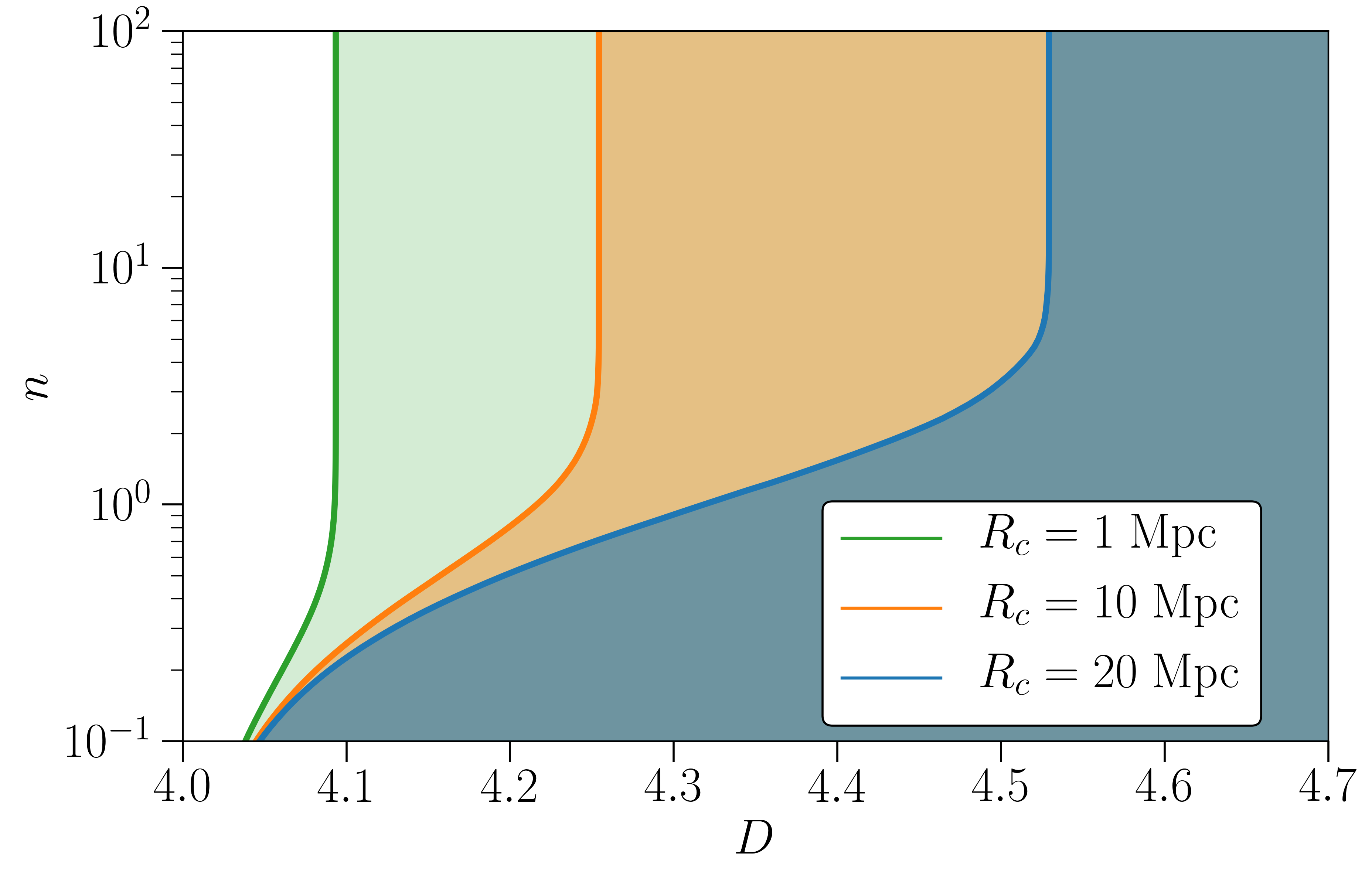 Figure 2: This figure shows the number of spacetime dimensions D supported by the joint observation of GW170817 in gravitational and electromagnetic waves. Shading indicates regions ruled out by the data. We have fixed certain model parameters that determine at which distance from the source gravitational waves start to leak into possible higher dimensions (denoted by R_c) and how abrupt this transition is (denoted by n).