Dated 29 November 2019. Read this summary in PDF format (in English) and in other languages: German

With the first detection of gravitational waves from the merger of two neutron stars by LIGO and Virgo (GW170817) and the detection of the merger's electromagnetic counterpart, we have entered a very exciting era in gravitational wave astronomy and neutron star astrophysics. Among the rich array of science that the detection of neutron star mergers will deliver is the exciting prospect of constraining the properties of matter in the neutron star core, where the densities are several times greater than that of an atomic nucleus. Constraining this enigmatic supranuclear "equation of state" has been a goal of astrophysicists and nuclear physicists for many decades. GW170817 was such a strong signal that it already places interesting bounds on the neutron star equation of state.

The precise impact of tidal effects depends not only on the equation of state but also on the complicated fluid dynamics excited by the tide within the neutron star interior. In this Letter, we investigated the possible impact of a proposed tidal instability, known as the "p-g instability", on GW170817. It is a form of nonlinear fluid instability in which the tide excites a low-frequency buoyancy-supported g-mode (like those excited on the surface of a pond when a pebble is thrown in) and a high-frequency pressure-supported p-mode (a sound wave). The instability takes place within the inner core of the neutron star, where the stratification is weak and the shear due to the tidal flow is especially susceptible to instability. Because the p-mode's natural frequency is much higher than that of the tide, the p-g mode pair is not resonant with the tide. As a result, unlike resonant instabilities, an unstable p-g pair continuously drains energy from the binary's orbit even after the orbital frequency changes significantly.

There are many potentially unstable p-g pairs, each becoming unstable at a different frequency and growing at a different rate. Although there is considerable uncertainty about the number of unstable pairs, their exact growth rates and how they saturate (i.e. reach a limiting value), estimates suggest that the impact could be measurable with current gravitational-wave detectors. Such a measurement would provide a new way of probing the neutron star interior, distinct from measurements of the neutron star tidal deformability.

Using a phenomenological model, we analyzed the instability's impact on the way the phase of the gravitational wave signal changes over time, using three parameters per star: an overall p-g amplitude, a saturation frequency, and a spectral index. We computed the Bayes factor — which provides a measure of how probable one model is relative to another, for a given set of data — comparing our p-g model to a standard model without this instability. Our analysis found Bayes factors close to one, which indicates that the observed signal is consistent with waveform models that neglect p-g effects. On the other hand, it also implies that the p-g model is equally good at fitting the data. By injecting simulated signals that do not include p-g effects and recovering them with the p-g model, we showed that there is currently about a 50% probability of obtaining similar Bayes factors even when p-g effects are absent.

We find that the p-g amplitude for neutron stars with masses of 1.4 times that of the sun is constrained to less than a few tenths of the theoretical maximum. This suggests that there are less than a few hundred excited modes, assuming they all saturate through a process known as wave breaking. For comparison, theoretical upper bounds suggest less than 1000 modes saturate by wave breaking. Thus, the measured constraints only rule out extreme values of the p-g parameters. They also imply that the instability dissipates an energy of less than 10^51 ergs over the entire inspiral, corresponding to less than a few percent of the energy radiated as gravitational waves.

In the future, with several more signals comparable to GW170817, it should be possible to improve the constraints on the p-g amplitude by a factor of a few. Obtaining even tighter constraints will likely require many more detections. Future measurements will also benefit from a better understanding of how the instability saturates. To date, there have only been detailed theoretical studies of the instability's threshold and growth rate, not its saturation. As a result, we cannot be certain of the fidelity of our phenomenological model. Nonetheless, with the LIGO and Virgo detectors becoming increasingly sensitive, the future for p-g studies promises to be very exciting. Stay tuned for updates as more detections pour in!

For more information on this figure, see the freely accessible arXiv preprint which contains the full analysis and results. 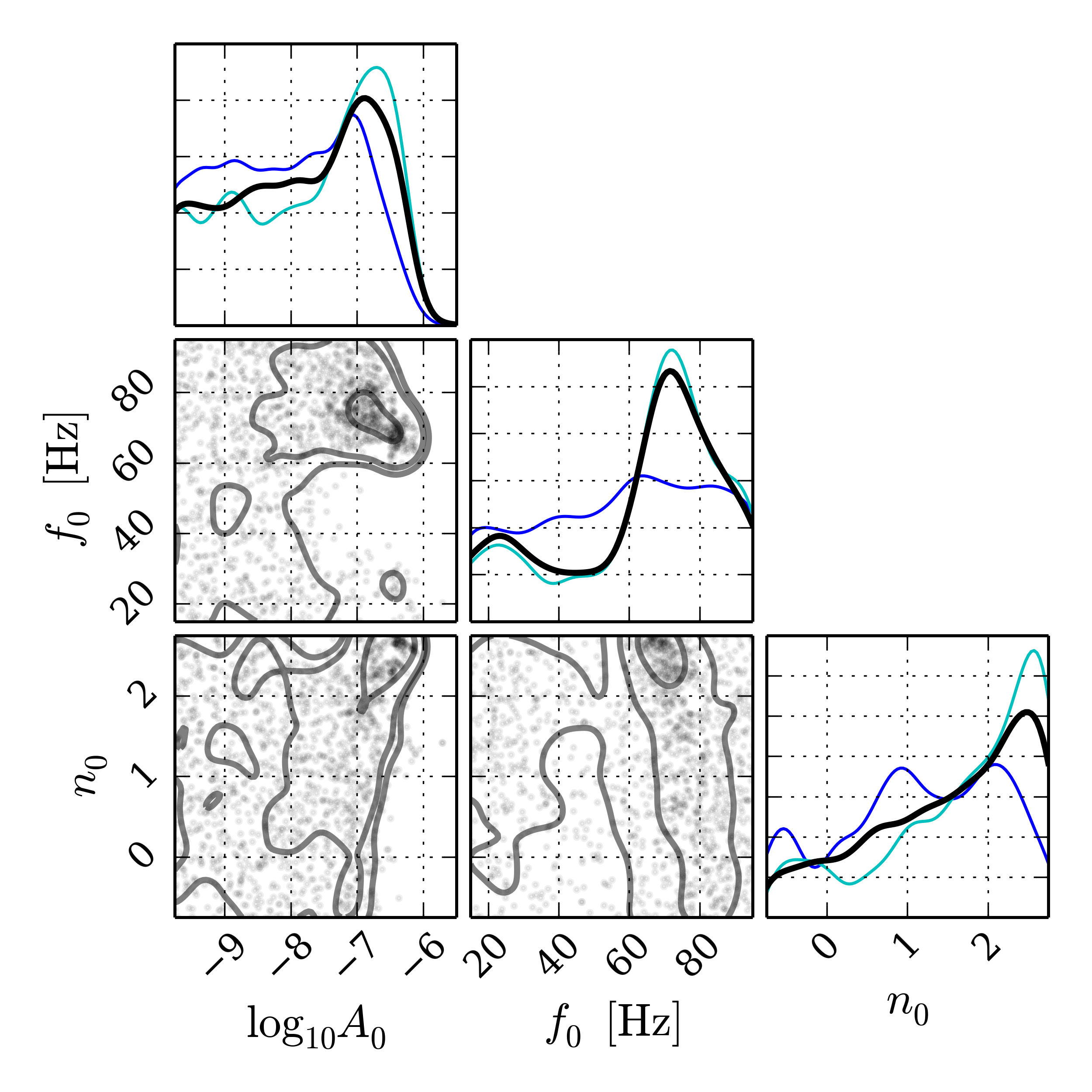 This figure shows the relative degrees of belief between different possible nonlinear tide behaviors. While there is a peak in the amplitude parameter, log10(A0), it is completely consistent with what noise alone might accidentally do about 50% of the time. f0 is a saturation frequency (in Hertz), and n0 is a spectral index.