GW190412: The First Observation of an Unequal-Mass Black Hole Merger

On April 12, 2019, the LIGO Scientific Collaboration and Virgo Collaboration observed gravitational waves produced by the inspiral and merger of two black holes. This event, dubbed GW190412, was observed with all three detectors operating in the network: both LIGO detectors (one in Hanford, Washington and one in Livingston, Louisiana) as well as the Virgo detector (located in Cascina, Italy). GW190412 was detected near the beginning of Advanced LIGO and Virgo's third observing run, known as O3, which started on April 1st 2019 and was suspended on March 27th 2020.

While the masses of the two black holes are consistent with those of previously observed black holes, GW190412 is unique in that it is the first black hole merger where the masses of the two black holes are definitively unequal — one black hole in the system is more than 3 times heavier than the other. This asymmetry in masses modifies the gravitational-wave signal in such a way that we can better measure other parameters, such as the distance and inclination of the system, the spin of the heavier black hole, and the amount that the system is precessing. In addition, the unequal masses of GW190412 enable us to verify a fundamental prediction of Albert Einstein's General relativity: that gravitational waves “ring” at more than one fundamental frequency, so-called higher multipoles.

How do we know GW190412 is a real gravitational-wave signal?

GW190412 is a loud event that was seen in all three detectors. Since the three detectors are all thousands of kilometers apart from one another, seeing this signal in all the detectors nearly simultaneously is a good sign that it is of astrophysical origin rather than due to noise.

The time-frequency representation of GW190412, known as a spectrogram, is shown in Figure 1. Though GW190412 is strong enough to be seen “by eye” in the data from the Hanford and Livingston detectors, we use a number of algorithms to systematically scan the data for gravitational-wave signals and determine their significance. Most techniques rely on matched filtering, which compares the observed data to simulated signals predicted from general relativity. We quantify the chance that a signal results from noise in the detectors as the false alarm rate. Using data from April 8 to April 18, we found a false alarm rate of one chance event per 30,000 years! This false alarm rate will become even more significant as more data from O3 are analyzed. We also performed checks for other types of instrumental and environmental sources of noise, and found nothing that could have significant impact on the detection or analysis of GW190412.

The unequal masses of GW190412 lead to an asymmetry in the gravitational-wave emission that helps us to better infer particular parameters of the system. We find that the effective spin was positive, which tells us that at least one of the black holes was spinning in an orientation close to the orbit of the two black holes around each other. Notably, due to the unequal masses of GW190412 we can for the first time put strong constraints on the spin of the larger black hole, which we find to be spinning at about 40% of the maximal spin allowed by general relativity. The effective spin and mass ratio inferred for GW190412 are shown in Figure 2. We also see marginal signs that the system is precessing, though any effects of precession are not strong enough to be claimed definitively. In addition, the unequal masses also help to break an ambiguity between the distance and the inclination of the system, allowing for a better measurement of both parameters. GW190412 occurred almost 2.5 billion lightyears away from Earth!

Hearing the Hum of Higher Harmonics

The unique properties of GW190412 also allow for the observation of a fundamental property of gravitational waves. Starting with the pioneering work of Einstein, and later refined by Newman, Penrose, Thorne and many others, the gravitational radiation from compact binaries was shown to be predominantly quadrupolar. This quadrupolar radiation can be thought of like the main sound that is heard when plucking a string on a guitar. However, just like musical instruments, gravitational radiation is predicted to also ring at higher overtones. These higher harmonics or higher multipoles are exceptionally difficult to parse out of a signal when the black holes are near equal in mass. The asymmetric masses of GW190412 allows for these subtle signals to be better “heard” in the gravitational-wave emission. We find that the data support the hypothesis, by a factor of greater than 1000:1, that there are higher harmonics in the signal. In the future, the relative intensity of higher multipoles may help to better disentangle the properties of coalescing black holes.

Each observing run of the Advanced LIGO and Virgo network has brought new and exciting insights into the zoo of compact binaries. As the first binary black hole system with definitively unequal masses, GW190412 provides an important datapoint in our understanding of binary black hole population properties. The observation of this single event tells us that black hole systems with unequal masses are relatively common, and that we should expect to observe many more such systems in the future.

Based on the detailed physics of stellar evolution, astronomers have built models of how binary black holes form in the universe, and of their expected masses and other properties. Though most models predict that binaries with near-equal masses should be more common, many also predict an appreciable number of systems like GW190412 with clearly unequal masses. Such systems are typically predicted to form at least ten times less often than their equal-mass counterparts. However, the observation of GW190412 with its apparently extreme mass-ratio is not unexpected, given that we have now detected well over 10 events. As we continue to increase our sensitivity to the gravitational-wave universe and build a quickly growing catalog of compact binary mergers, we expect to observe many more systems that better enlighten our view of stellar evolution, compact binary formation, and fundamental physics. 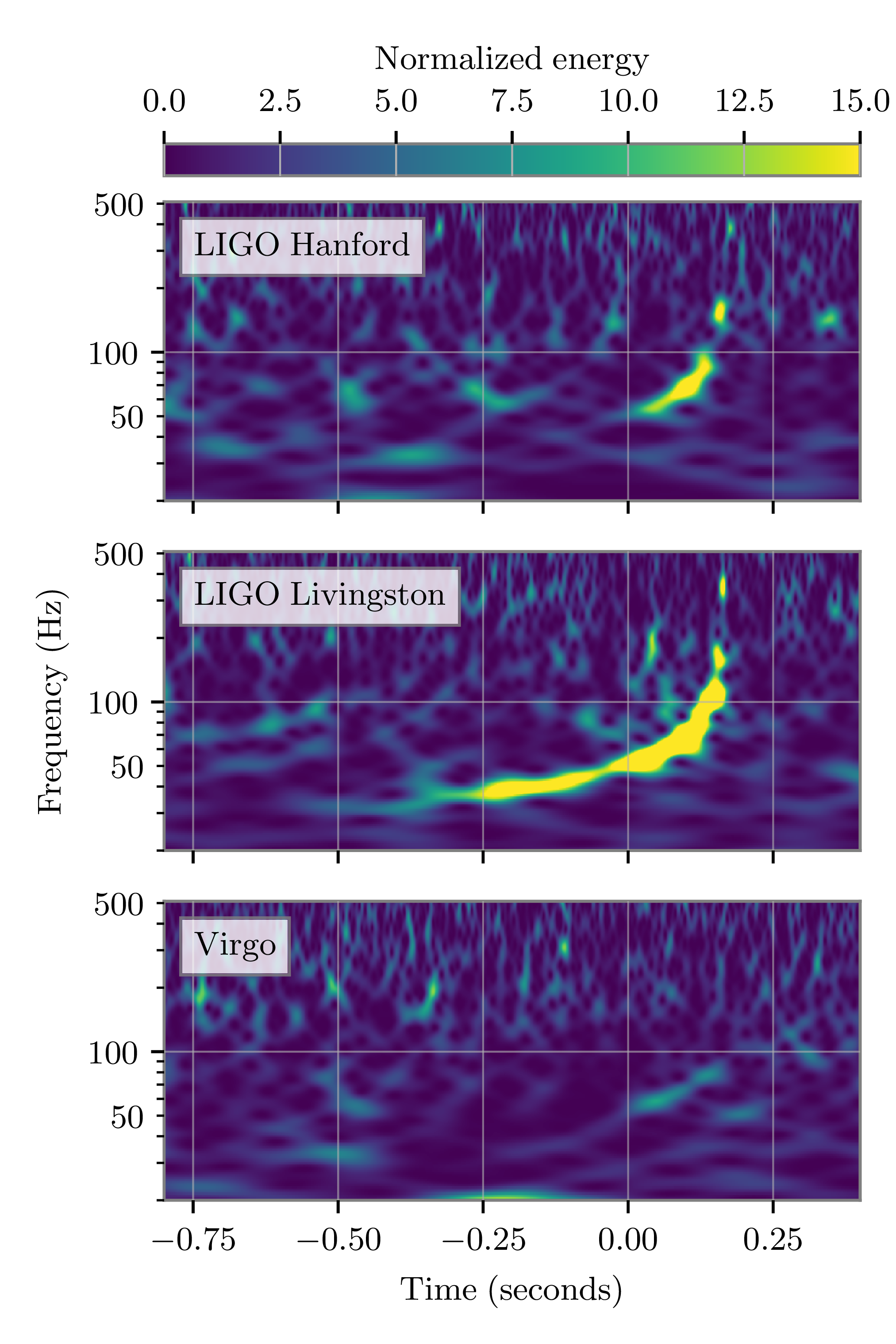 Figure 1: The spectrogram of GW190412 in the three gravitational-wave detectors. The horizontal axis represents time, and the vertical axis shows the frequency of the signal. Color represents the amount of energy in a certain frequency at a certain time. The familiar “chirp” can be seen from this signal as an increase in frequency and energy over time, resulting from the increased power of gravitational-wave emission as the two black holes orbit closer and closer (the “inspiral”) and subsequently merge. 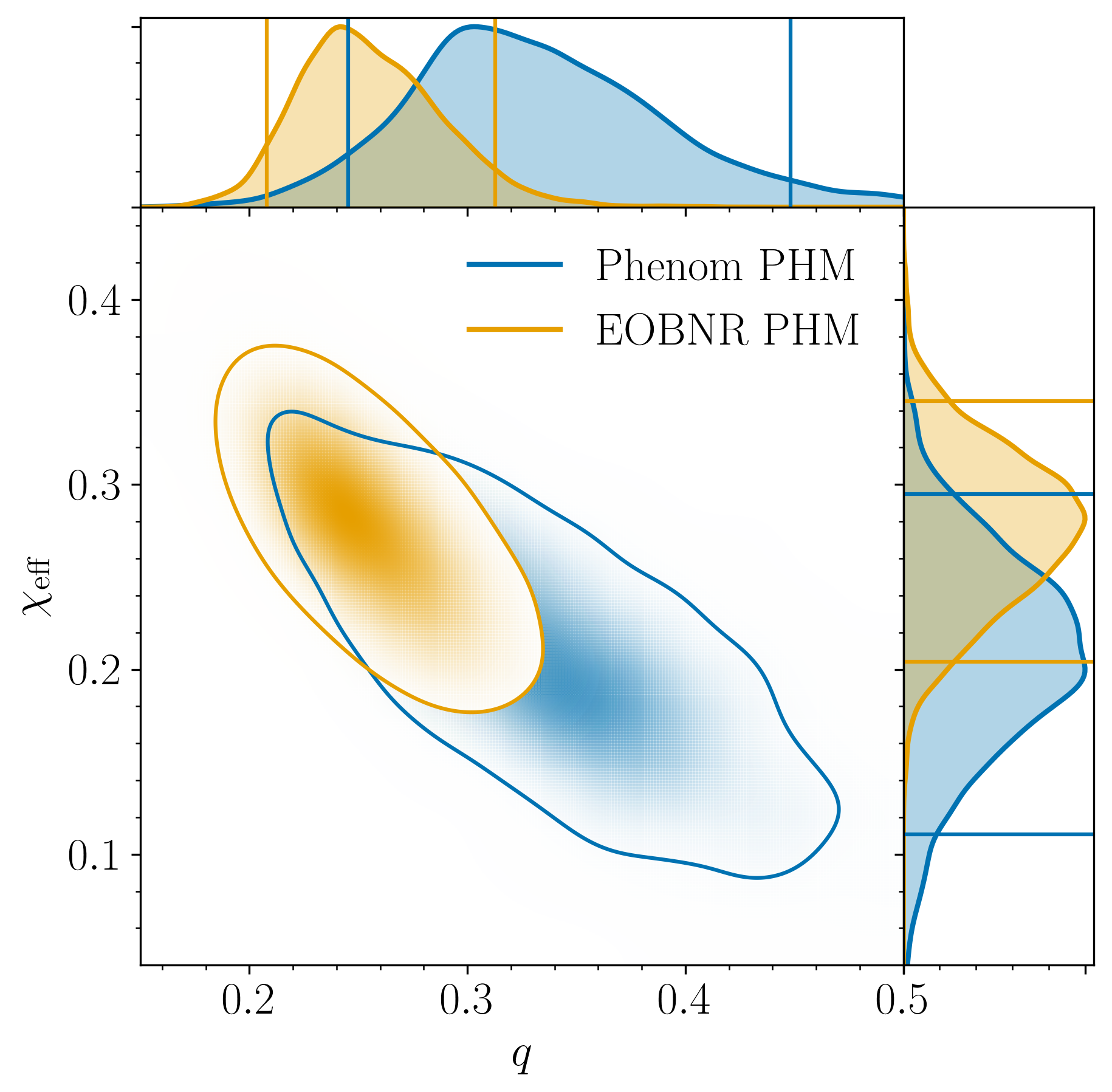