SEARCHING FOR COMMON SOURCES OF GRAVITATIONAL WAVES AND HIGH-ENERGY NEUTRINOS WITH LIGO, VIRGO AND ICECUBE

Cosmic explosions are excellent natural laboratories with which to learn about how particles behave at extreme energies, as well as providing a window on the distant universe. In the center of these events are often black holes that swallow matter from their environment, resulting in outflows of highly energetic gas. The particles in these outflows can reach extreme velocities, and can produce both light and elusive, near massless particles called neutrinos that we can observe even from extreme distances. The energetic processes that create the central black hole will also result in the emission of gravitational waves.

In certain situations, cosmic explosions will remain 'dark', emitting no light that can be seen by a distant observer. This might be because the explosion is buried within a massive star, and the light which it emits is absorbed by its surroundings, or because the gas streaming away from the explosion was too cold to produce observable light in the first place. In cases like this our best shot at learning about the explosion may be through looking for other cosmic 'messengers', like gravitational waves or neutrinos, that can pass through thick layers of matter without being absorbed; these messengers can also be much easier to distinguish from the emission of less violent cosmic events. 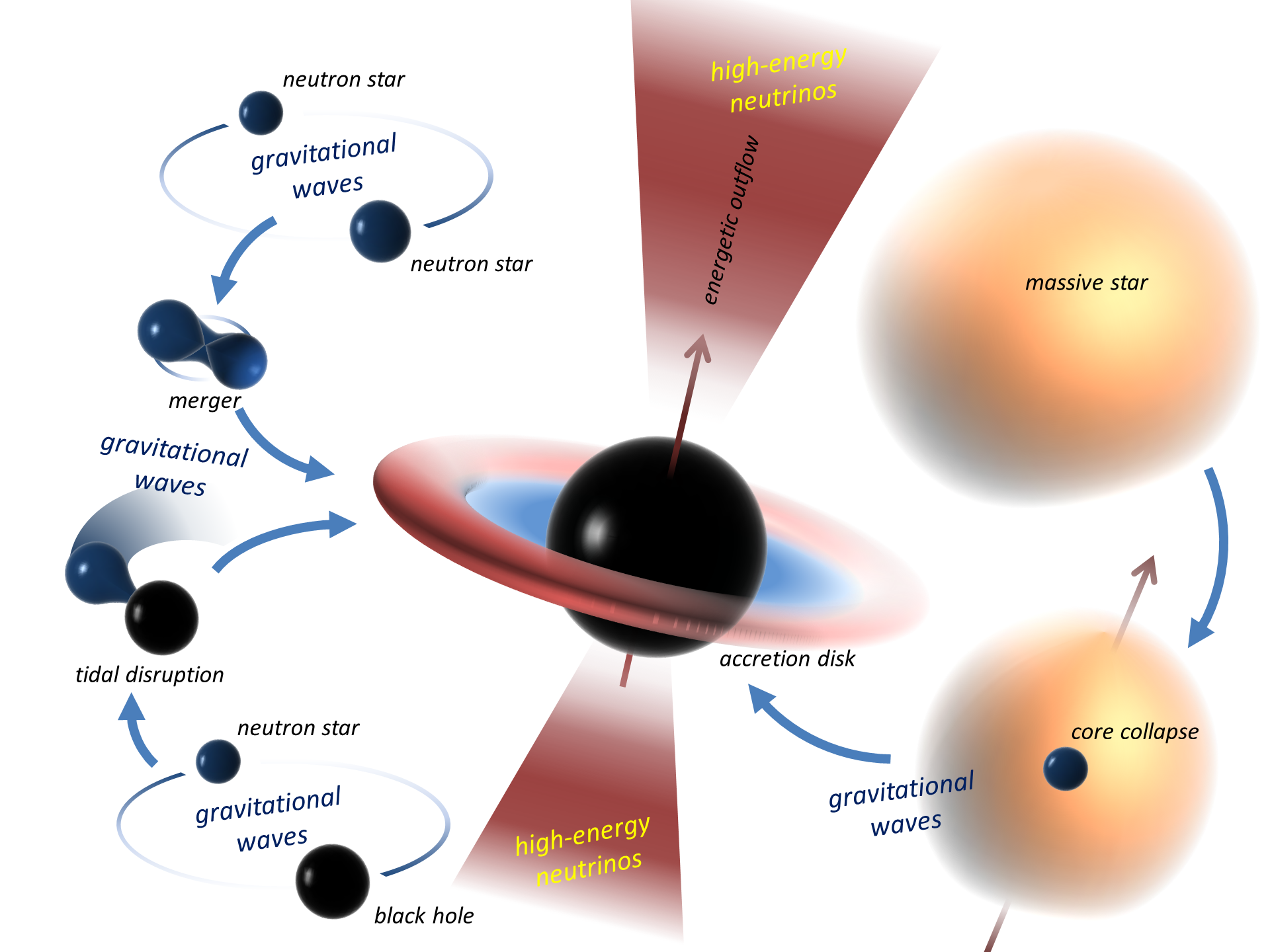 Click to enlarge. One of the most interesting cosmic explosions for which we can expect to see both gravitational waves and high-energy neutrinos are called gamma-ray bursts (GRB). These bursts of very high energy photons come from particles, such as electrons and protons. The outflow of these particles is likely to originate from a black hole that is accreting matter. The black hole may be formed by either the merger of two neutron stars, or by the collapse of a particularly massive star. If part of the neutron star is ripped apart in the process, it can accrete onto the black hole and can supply the matter that will be accelerated to high velocities. The figure shows when and where, in these processes, one can expect the emission of gravitational waves and high-energy neutrinos.
Credit: I. Bartos/Based on arXiv:1212.2289

This is an exciting time to search for gravitational waves and neutrinos. The very first high-energy neutrinos of cosmic origin have been identified recently by the IceCube neutrino observatory deep in the ice at the South Pole. This discovery confirms our expectations about some extremely energetic processes in the universe, while it also opens up a new frontier, with many new and exciting questions, in astronomy. The timing of the discovery is also very exciting from the gravitational wave perspective - with the next generation of advanced gravitational wave detectors (advanced LIGO and advanced Virgo) beginning observation next year, creating a new way to study extreme processes in the cosmos. 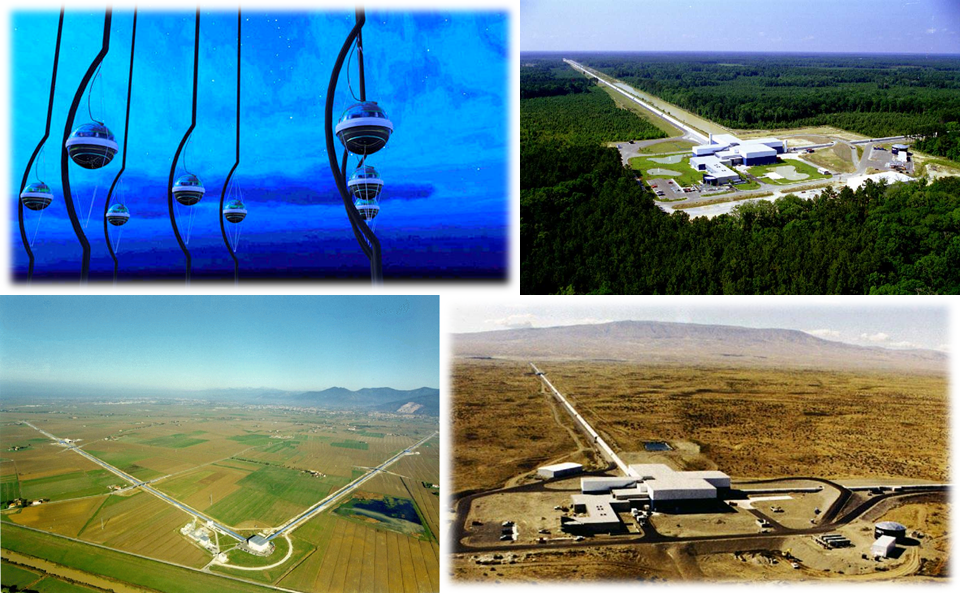 Our search spanned several months of joint observational data between the detectors involved, and included practically all observations with the LIGO and Virgo gravitational wave observatories that were coincident with those carried out by IceCube. The search involved a total of about 20,000 detected neutrinos. We looked for gravitational wave candidates and neutrinos that appeared to be coincident in time and direction on the sky, as would be expected if they came from a common source. Our search found no such coincidences, even though the neutrinos detected could have orginated from cosmic explosions out to a distance of millions of light years. The probability of a coincident detection depends on how often such explosions occur, as well as on the distances to which IceCube and LIGO and Virgo are sensitive. Our work has allowed us to limit the rate of cosmic processes that produce strong neutrino and gravitational wave emission, but the greater sensitivity of the upcoming detectors will allow us to see to much greater distances.

Since the gravitational wave and neutrino emission from different types of cosmic explosion is still uncertain, we also determined how well our search can limit the rate of explosions for a range of emission model parameters. These limits are shown in the Figure on the top right. For the most part, the limits are consistent with the rates known from observations using electromagnetic radiation.

to neutrinos with very high energies. These energies are much higher than those at particle accelerators like the Large Hadron Collider at CERN. 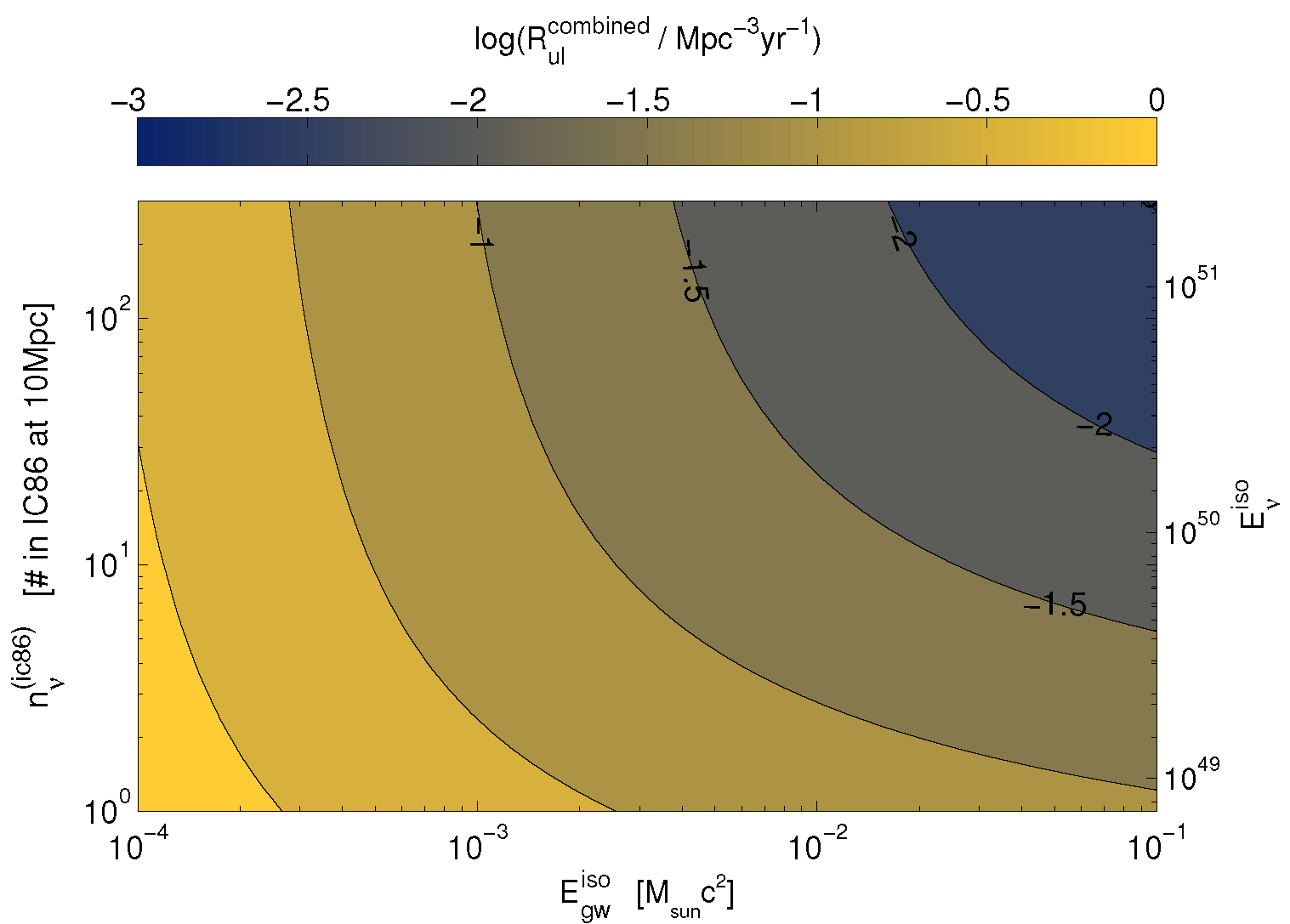 Click to enlarge. Upper limits on the event rate of joint emission of gravitational waves and high-energy neutrinos. Here, the horizontal axis indicates the total energy emitted in gravitational waves, with the unit of energy chosen as the amount of energy released if all of the Sun's mass were converted into energy. This sounds like a lot of energy, and it is, but cosmic explosions are capable of liberating comparable amounts of energy. The vertical axis indicates the amount of energy radiated away in high-energy neutrinos, with the range shown comparable to the range of gravitational-wave energy. The actual limits on the explosion rate that we obtained are indicated with the color code, in units of 1 explosion in a cubic megaparsec per year, where a distance of one megaparsec is about 30 times the size of the Milky Way. 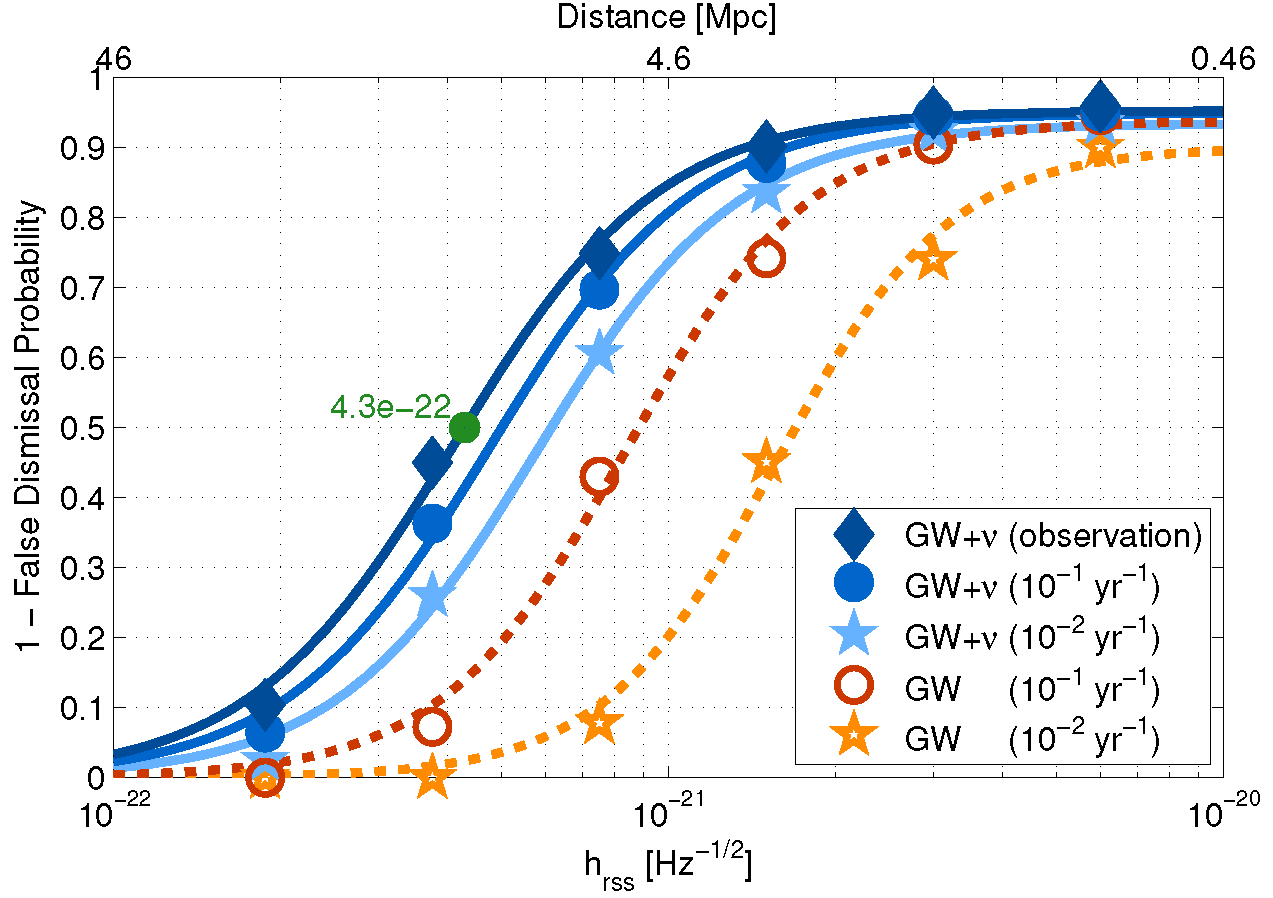 Click to enlarge. Detection efficiency of the joint gravitational-wave-neutrino analysis, as well as the gravitational-wave-only search, as a function of the gravitational wave signal amplitude measured at the detectors (denoted hrss) for a gravitational-wave signal around the frequency to which the LIGO-Virgo observatories are the most sensitive. For the joint analysis, the efficiency is calculated assuming the detection of one neutrino from the source. The different curves correspond to different so-called false alarm rates (FAR), which indicate how often one would obtain such a signal by chance without any astrophysical event. The plot shows that for lower FARs, i.e. for signals that are obtained by chance less often, the joint search loses sensitivity more slowly than the gravitational-wave only search. The results show that, as expected, requiring both gravitational waves and neutrinos to be observed leaves less room for false detections.