Cosmic strings are hypothetical one-dimensional objects that may have formed in the early Universe, while it was cooling down and expanding. They are analogous to the cracks that form when water freezes; as the early Universe cooled, space-time could have 'cracked' (the technical term for these 'cracks' is topological [*] defect) causing cosmic strings to form. Additionally, in some string theory [*] scenarios fundamental strings can grow to cosmological scales and behave similarly to cosmic strings. These are called cosmic superstrings, and unlike ordinary cosmic strings they interact probabilistically when they cross.

The network of cosmic (super)strings formed in the early Universe would have evolved in time as the Universe expanded. The interaction of strings is characterized by the formation of loops. When two strings intersect each other at two points or when a string crosses itself, they reconnect and an isolated cosmic loop is formed.

Cosmic string loop formation. A loop forms (a) when two strings interacts in 2 separate points or (b) when a string crosses itself.
© Cambridge cosmology group

These gravitational waves may be detectable by gravitational wave detectors. A first search was conducted, analyzing LIGO and Virgo data collected between 2005 and 2010 (S6), and no evidence of a cosmic string signal was found. However, the improved sensitivity of advanced LIGO and advanced Virgo opens up new possibilities for detection of both the stochastic background and gravitational wave bursts. We conducted a new analysis, using the data collected between 2015 and 2016 when the detector network was in the first observing run [*] (O1), using three different models of cosmic string loop distribution. This search was done for both cosmic strings and cosmic superstrings indistinguishably.

The gravitational wave spectrum produced by the cosmic string network depends on the number of loops of a certain length at a specific time. We considered three models which use different assumptions to predict this number density function. The first model (M1) is based off the assumption that all loops are formed with the same size α. The second model (M2) uses numerical simulations to determine the rate of production of different size loops. Finally, the third model (M3) simulates the distribution of non-self intersecting loops at time t, and predicts that gravitational back-reaction smooths out the smallest loops (thus hindering their formation).

Shown in the top figure to the right is the predicted loop distribution for each model. Models 1 and 2 predict a very similar distribution, while for Model 3 the gravitational back-reaction changes the distribution for loops of smaller size.

These results allow us to place constraints on the values of the cosmic string parameters, string tension and the probability of string intersections. In addition to the burst analysis and LIGO O1 stochastic background analysis, measurements from pulsar timing arrays, cosmic microwave background (CMB), and big-bang nucleosynthesis (BBN) experiments place limits on the total energy density in gravitational waves, and thus constrain cosmic string parameters as well. Shown to the right are the results of this analysis for each of the three models, where regions below a line are configurations that would produce a detectable gravitational wave signal or one that has been ruled out by experiments.

The sensitivity of advanced LIGO and Virgo detectors will continue to improve in the coming years. Operating at design sensitivity, these should be able to detect lower amplitude signals and thus probe most of the cosmic string parameter space for all three models. This should help us to answer the question of whether or not cosmic strings exist.

For more information on how these figures were generated and their meaning, see the publication on arXiv.org.

This plots shows cosmic string loop production as a function of the loop size for each of the three models studied. 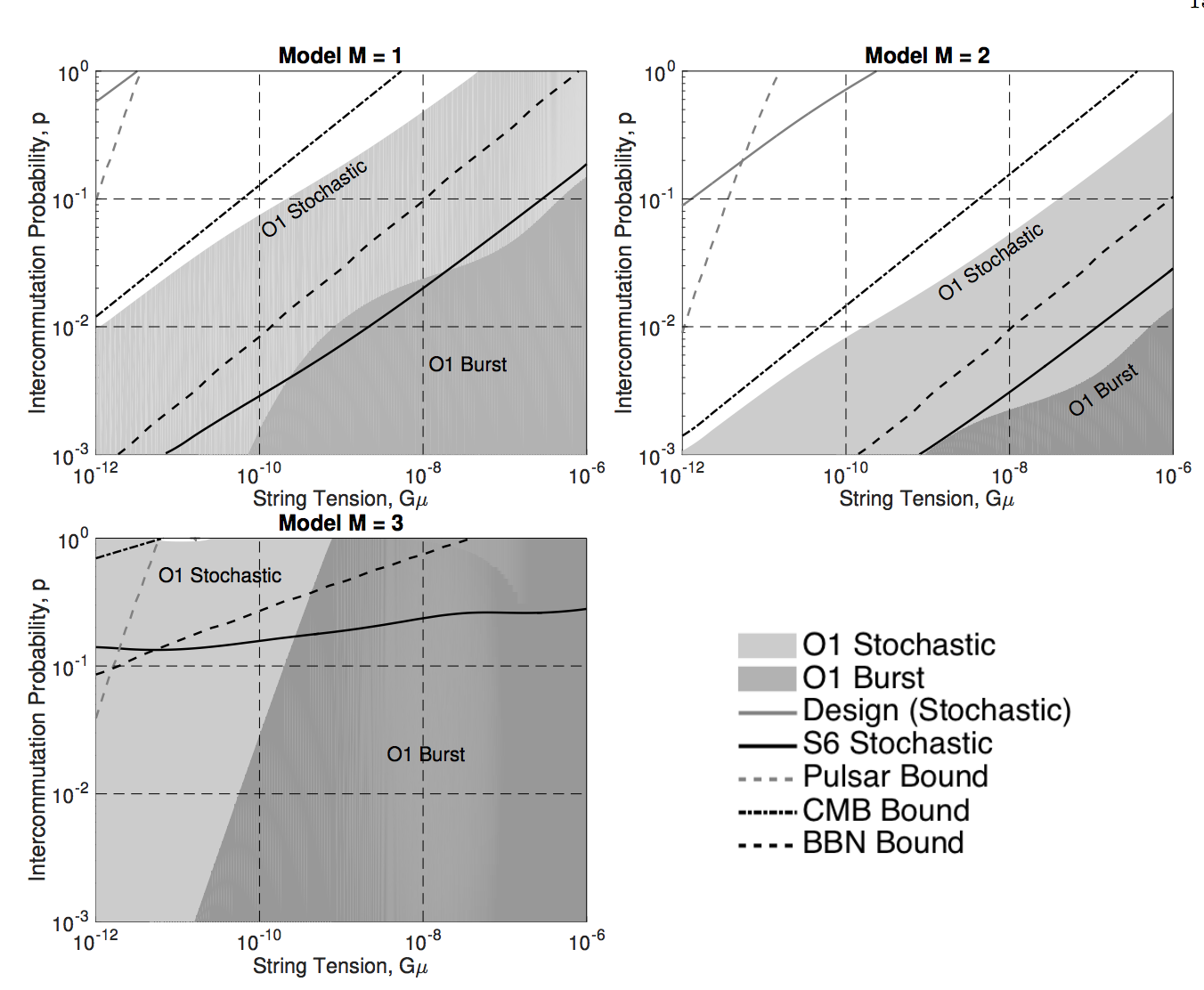 This plot shows constraints on the cosmic string parameters, the string tension Gμ and intercommutation probability p. We are able to reject using our analysis and other experiments regions below a line.