What's behind the mysterious gamma-ray bursts? LIGO's search for clues to their origins

The story of gamma-ray bursts (GRBs) began in the 1960s aboard spacecrafts designed to monitor the former Soviet Union for compliance with the nuclear test ban treaty of 1963. The satellites of the Vela series, each armed with a number of cesium iodide scintillation counters, recorded many puzzling bursts of gamma-ray radiation that did not fit the expected signature of a nuclear weapon. The existence of these bursts became public knowledge in 1973, beginning a decades long quest to understand their origin. Since then, scientists have launched many additional satellites to study these bursts (gamma rays are blocked by the earth's atmosphere) and have uncovered many clues.

GRBs occur approximately once a day in a random point in the sky. Most GRBs originate millions or billions of light years away. The fact that they are still so bright by the time they get to earth makes them some of the most energetic astrophysical events observed in the electromagnetic spectrum. In fact, a typical GRB will release in just a handful of seconds as much energy as our sun will throughout its entire life. They can last anywhere from hundredths of seconds to thousands of seconds, but are roughly divided into two categories based on duration (long and short). The line between the two classes is taken to be at 2 seconds (although more sophisticated features are also taken into account in the classification). Long GRBs are likely caused by the core-collapse of rapidly rotating massive stars, whereas short GRBs are thought to be caused by the coalescence of two neutron stars, or a neutron star and a black hole.

This paper describes a search performed during the first observing run of Advanced LIGO (O1) for gravitational waves (GWs) associated with GRBs. All GRB sources could produce GWs: long GRBs may produce a chaotic burst of gravitational radiation whereas short GRBs from a coalescence would produce a chirp. If observed, GWs could be the 'smoking gun' that confirms our theories about the origin of GRBs. In the case of short GRBs, in particular, GWs could confirm the binary neutron star merger model. Furthermore, from studying the waveform of a merger we could gain a unique view into the inner workings of a neutron star and even infer the masses and spins of the coalescing objects, distinguishing between neutron stars and black holes.

How do we search for GWs from GRBs?

We employ two different techniques to search for GWs in association with GRBs. In the case of short GRBs, the predicted GW emission from coalescing binaries is well understood. We can leverage that precise understanding of the signal to improve our chances of detecting it. Put simply: it is easier to find something when you know exactly what to look for! This search uses templates of GW waveforms to search for a binary merger signal around the time of the GRB. This "modeled" search is highly sensitive. During O1 it could detect neutron star mergers out to distances of roughly 326 million light-years and the merger of a neutron star and a black hole out to about 489 million light-years!

Long GRBs require a different technique. The collapse of a massive star is a vastly complicated process. Not only are the GW emission mechanisms difficult to model, they are likely to vary from event to event. Additionally, there may be types of GW signals that we do not even know to look for! With this in mind, we design an unmodeled search. This process makes no assumptions about the form of the GW signal. Instead, it simply identifies signals that are stronger than you would expect from just detector noise. In this sense, the unmodeled search method is like searching a haystack for "everything that isn't hay." It is not as sensitive as the modeled search, but it makes up for the loss in sensitivity by being able to look for a much wider array of GW signals.

So what did we detect during O1?

Over the course of O1, 110 GRBs were observed by satellites/spacecrafts. But like any complicated experiment, Advanced LIGO cannot be "on" 100% of the time. There may be disruptions in the data stream due to environmental factors or routine maintenance. During the first observing run, the two Advanced LIGO detectors had a combined duty cycle of roughly 40%. Thus of the 110 GRBs that occurred, we were able to analyze 41 of them (roughly 38% of the sample).

So what did we detect? The short answer is: nothing. There were no GWs detected in coincidence with a GRB using either the modeled or unmodeled searches. But this is far from being bad news! Even a non-detection provides useful information: we can confidently state that the source of any GRB in our sample had to be located very far from earth (typically hundreds of millions of light years away, which is roughly five times further than any previous LIGO GRB search has been able to probe). The data taken in O1, despite the lack of GW detections, allow us to begin to answer the question "how nearby are the closest GRBs?" (see the top figure on the right). Once Advanced LIGO reaches its design sensitivity, we expect to be able to answer that question with even more confidence, and to even make the first direct detections of GWs associated with GRBs.

An event that stood out and that is worthy of mention is GRB 150906B. This is a short GRB that happened a few days before the official start of O1. Nonetheless, one of the Advanced LIGO detectors was operating at optimal level. This GRB is unique because it was localized to a part of the sky very close to NGC 3313, a nearby galaxy that is only 176 million light-years away from Earth (see the below figure). If GRB 150906B was in NGC 3313 - or any of the other in the surroundings of its localization region - then it would be close enough to allow LIGO to detect it directly! 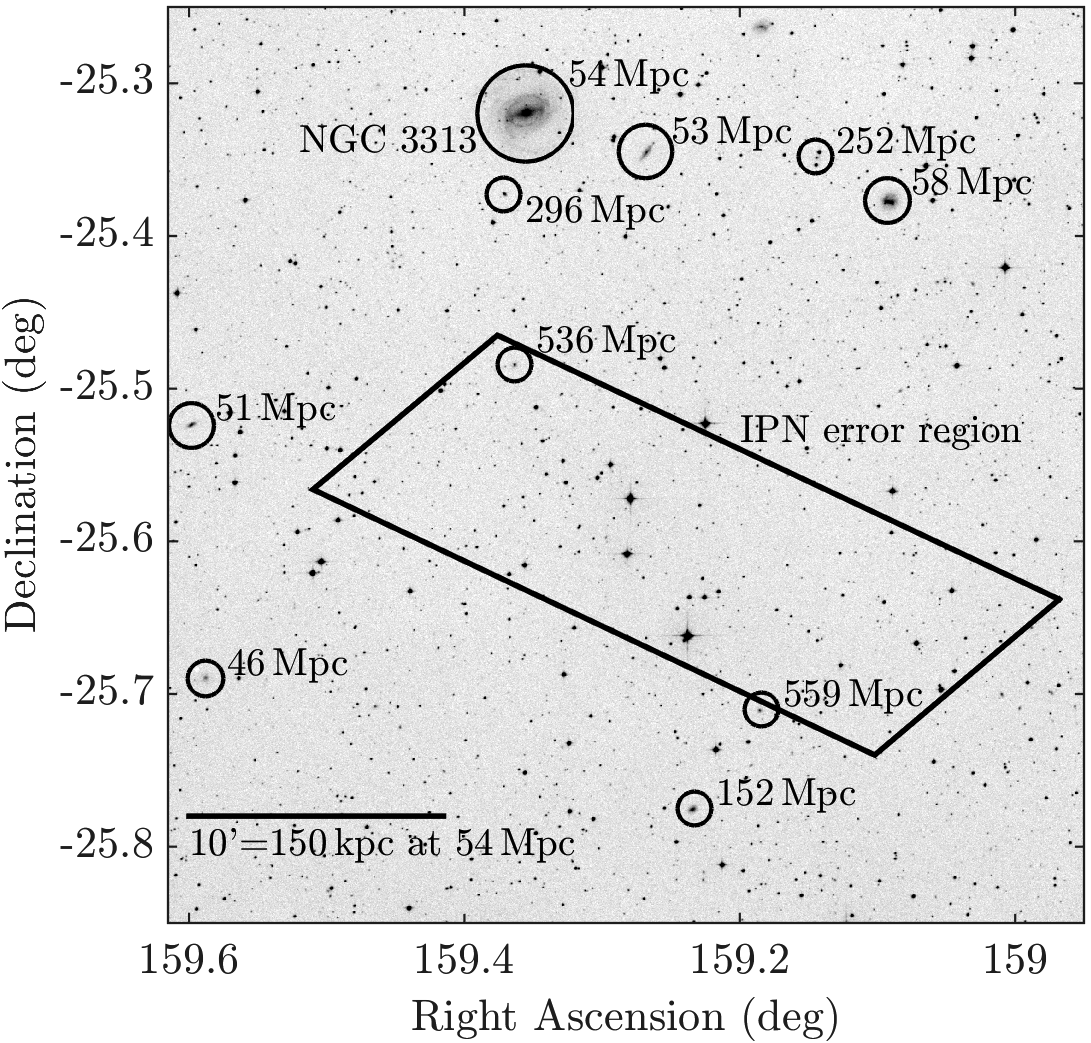 We did not detect any GWs associated with GRB 150906B. As discussed before though, we can still learn a lot from a non-detection! Specifically, we can assert one of two things: either GRB 150906B occurred in one of the nearby galaxies, but was not a binary merger; or it could be a binary merger but it did not occur in one of the nearby galaxies. In the former case, it is likely GRB 150906B was caused by the core collapse of a massive star, a giant flare from a special type of neutron star called a soft-gamma repeater, or some other exotic phenomena that produces a short burst of gamma rays. In the latter case, based on the sensitivity on our modeled search, we can conclude that if it was a binary merger, it occurred at a distance greater than 332 million light-years, possibly in one of the other more distant galaxies shown in the above figure (see the bottom two figures on the right for the exclusion).

This is not the first time LIGO has put valuable limits on the circumstances surrounding a GRB. GRB 051103 and GRB 070201 were both localized to positions close to nearby galaxies, and in both cases LIGO was able to exclude a binary merger as the source of the GRB. 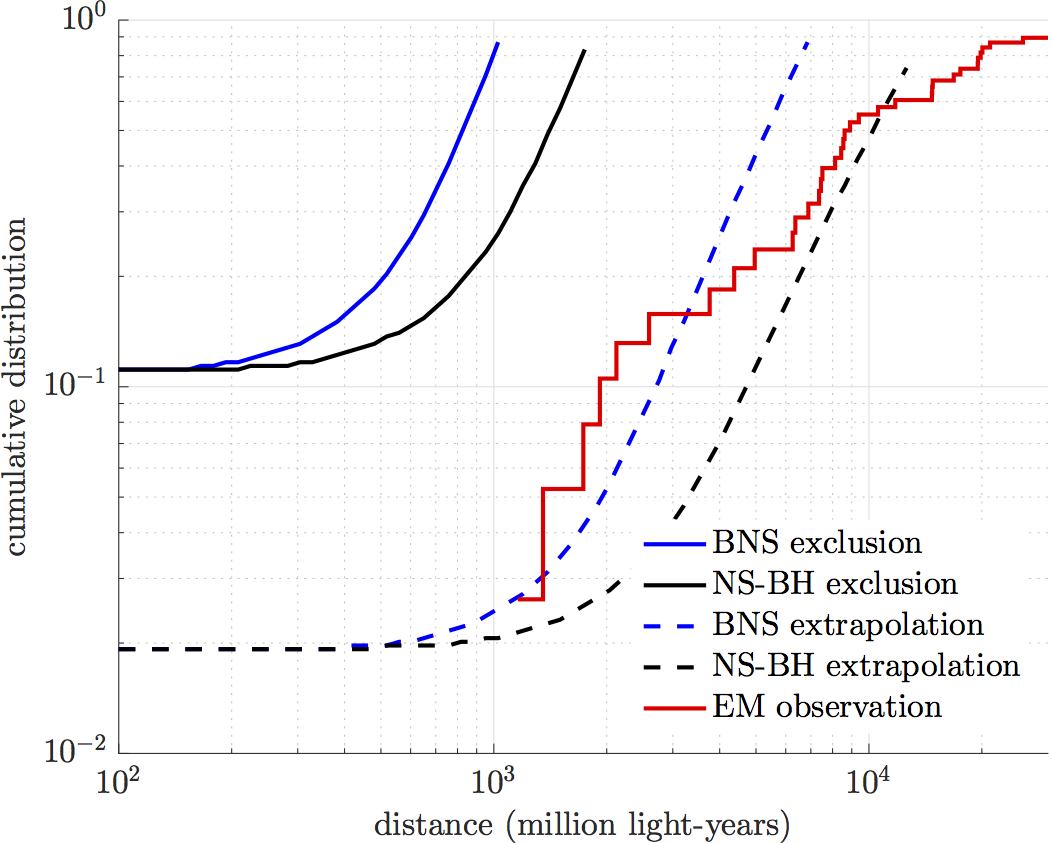 The horizontal axis shows the distance of the putative GW signal, and the vertical axis the fraction of sources we should have detected at a given distance. The red line shows the measured distance distribution for short GRBs. The solid blue and black lines show the exclusion distance for the short GRBs analyzed with the modeled search for binary neutron star (BNS) and neutron star-black hole (NS-BH) systems. The dashed lines show an extrapolation of these results to 2 years of Advanced LIGO operation at design sensitivity. These extrapolation lines lie very close to known GRB distances, making a joint GW/GRB detection very likely in the advanced detector era (see publication for results for all GRBs analyzed with the unmodeled search). 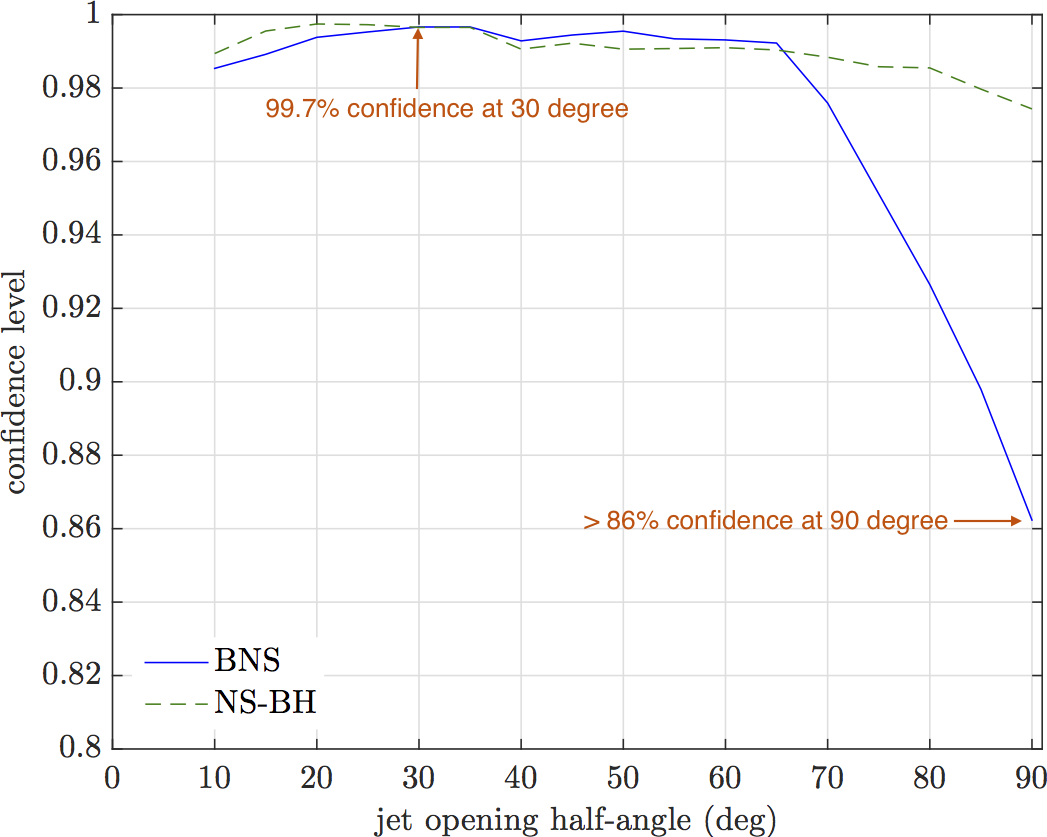 Exclusion confidence level for BNS and NS-BH systems at 176 million light-years from Earth as a function of the jet half-opening angle of the binary. If we assume unbeamed (i.e., isotropic) gamma-ray emission from GRB 150906B, the possibility of a binary coalescence as a progenitor of NGC 3313 is excluded with greater than 86% confidence. The confidence rises to greater than 99.7% for the jet half-opening angles less than 30 degree. 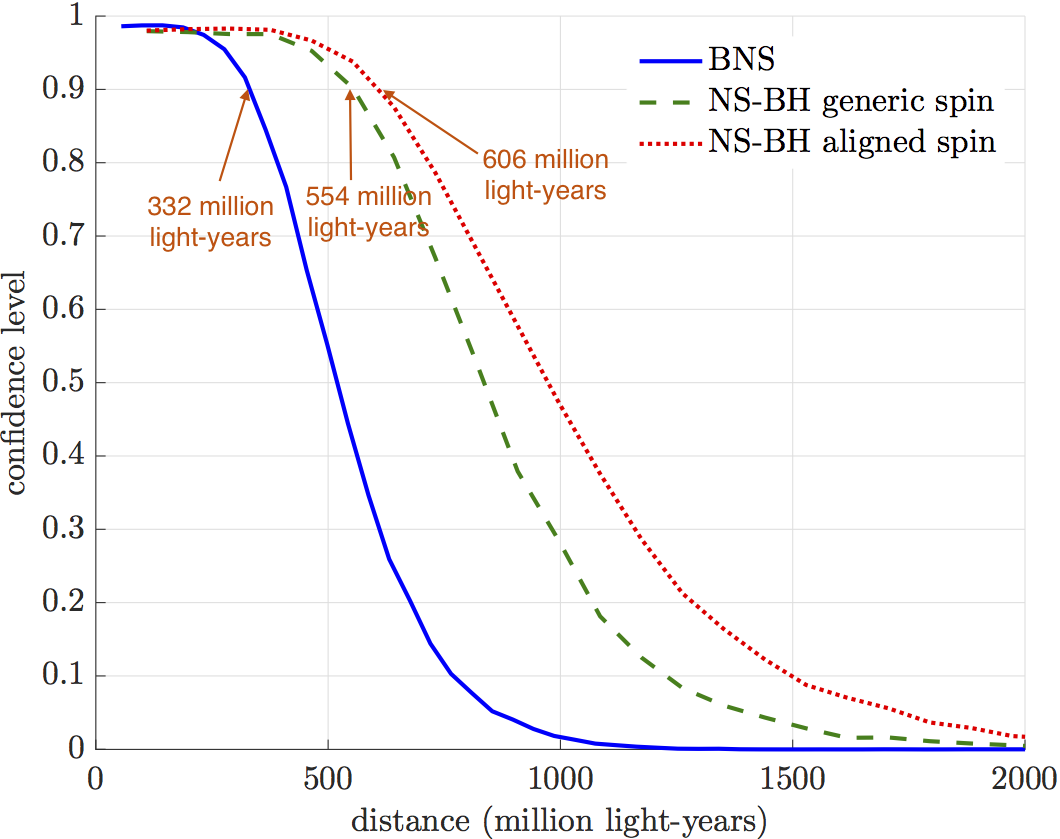