During the first two observing runs of the Advanced LIGO and Advanced Virgo detectors, gravitational-wave signals from several binary black hole mergers and a binary neutron star merger have been detected (click here to learn more). This important achievement has given us the ability to study astrophysical objects in a completely new way, through gravitational-wave astronomy. However, binary mergers are not the only detectable sources of gravitational waves. Another important possibility is emission from asymmetric isolated neutron stars. This class of astrophysical object is produced after the death of a massive star in the catastrophic event known as a supernova explosion. Neutron stars are characterized by very strong magnetic fields and nuclear matter densities. Their mass can be between one to two times the mass of the Sun (about 2.0 x 1030 kg), but packed into a sphere of radius about 10 km, making the most massive neutron stars roughly eighty trillion times denser than lead. A teaspoon of neutron star material would have a mass of about 10 million metric tons, which is approximately equivalent to the weight of a small mountain on Earth.

Typically neutron stars spin around their axis of rotation between 0.25 and 4 times every second, but some of them, such as the well known Crab pulsar, rotate between 20 and 60 times per second or even faster. To get an idea on how fast these stars spin, we can compare these numbers to the Sun's rotational frequency, which is 1 rotation roughly every 24 days.

Many neutron stars can be observed using telescopes through their light emission in the radio, X-ray, and gamma-ray bands. Their emission is very particular and strongly resembles the light emission of a lighthouse (i.e., periodic pulses, as the light beam swings past an observer's line of sight; see the upper figure). For this type of neutron star, referred to as a pulsar, their spin rate can be measured from the frequency of the observed radio pulses.

Einstein's theory of general relativity says that gravitational waves (GWs) are emitted when massive asymmetric sources are accelerated. A symmetric object such as a perfect sphere emits no GWs, even if it is spinning rapidly. Neutron stars may be close to the most perfect spheres in the universe, but even they are not absolutely perfect spheres. Any departure from a perfectly symmetric spinning sphere will produce GWs. We use the ellipticity as a quantitative measure of the departure of a neutron star from a perfect sphere. For example, if a neutron star has a small "mountain" on its surface crust, even as small as a centimeter above the average radius of 10 km, that will result in an ellipticity of around 10-6, and GWs will be emitted.

It has been observed that pulsars are slowly spinning down (typically by 1 rotation per second every 1000 years or longer!). Theoretically, a fraction of their rotational energy loss can be explained through the emission of GWs. Consequently, the detection of GWs emitted by neutron stars will help us to answer the question "How much energy does the star lose via gravitational waves?" This, in turn, will help us understand how much a typical neutron star deviates from spherical symmetry.

Unfortunately, GWs from neutron stars are expected to be very weak; hence, it is very difficult to distinguish the signal from the noise in our data. The optimal method to disentangle a GW signal from detector noise is called matched filtering. In this method, we compare the data to theoretical or simulated templates which match our expectations of how the GWs should look. For rotating neutron stars, the templates are described by two key physical properties, or parameters, of the star: the star's rotation speed (frequency) and its spin-down rate. Specifically, the templates are essentially sinusoidal waveforms with frequency equal to twice the frequency of the light pulses, but with this frequency changing slightly over time due to the spin-down and the detector motion with respect to the star. In principle, we can search for a specific pulsar by using a template with frequency and spin-down rate matching those we find by observing the pulsar with our partner telescope facilities. However, even a small mismatch in these two parameters would be enough to prevent a detection of GWs. There are reasons to believe that there may indeed be small mismatches — for example, the actual frequency may differ from the predicted value due to the nature of the matter in the rapidly rotating star, or due to imperfect measurements of the light pulses. To account for this, we make use of GW templates with frequencies in a narrow band around the frequency derived from the light pulses. We refer to these as "narrow-band searches".

In this work, we run a narrow-band search using data from the two LIGO interferometers, targeting 11 known pulsars for which we can constrain the GW emission with our current sensitivity. The search uses more than a billion possible GW templates. Unfortunately, we find no evidence for the presence of a gravitational-wave signal from these pulsars. It appears that our sensitivity is still insufficient for detecting such weak signals. However, we will continue to improve the sensitivity of our detectors and can look forward to detecting such gravitational waves with this method applied to data from future observing runs.

We can compute upper limits on the GW amplitude, and consequently on the star's ellipticity, for the pulsars that we study. Upper limits play a very important role in understanding the physics of the neutron star; in fact, they can be thought of as indicating the maximum fraction of rotational energy that these stars are losing via GW emission. For instance, the Crab and Vela pulsars are losing less than 0.5% and 7.3%, respectively, of their energy via GW emission. A complete overview of the upper limits set in this search can be found in the lower figure, where each value is compared with our search sensitivity and with the theoretical maximum value of GW energy that each neutron star could lose.

Artist's impression of a pulsar. (Image credit: Joeri van Leeuwen. License: CC-BY-AS.) The lower panel shows the pulsed emission observed by our partner telescopes due to the beaming of the radiation, known as the "lighthouse effect." 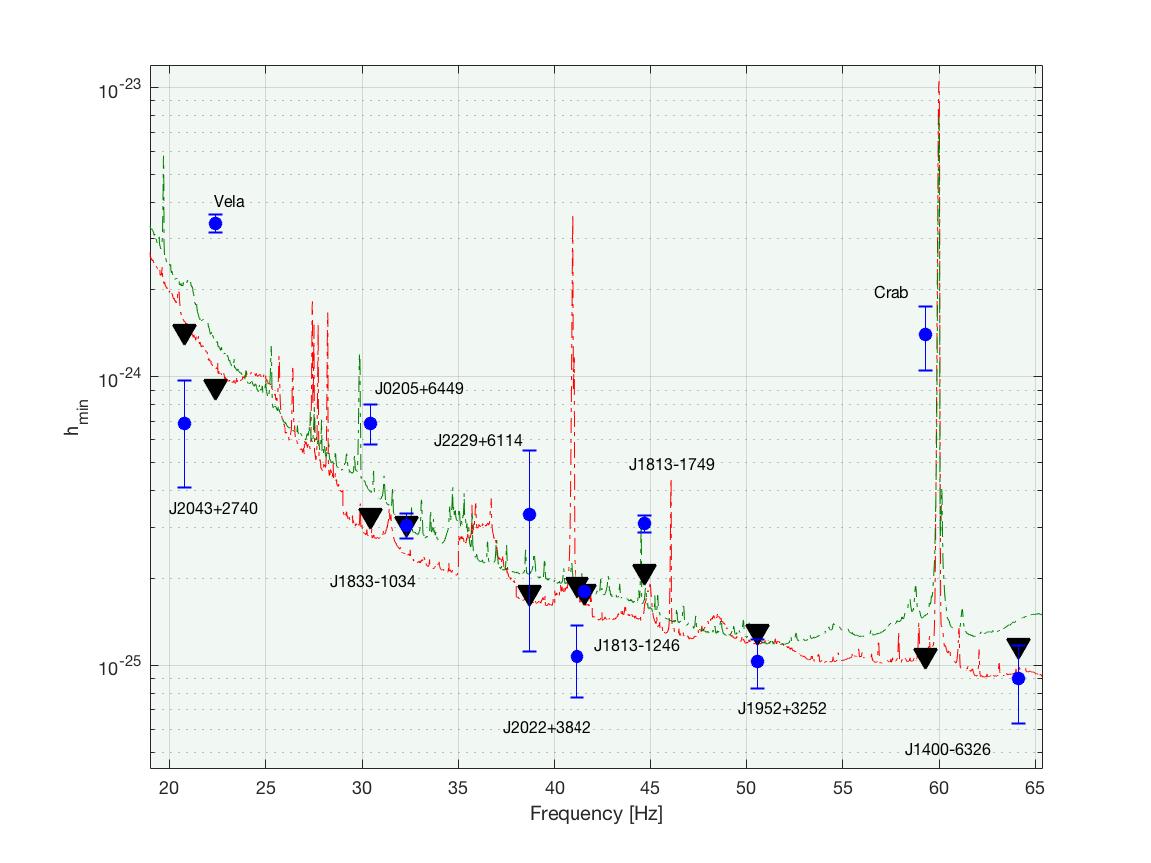 Upper limits on the gravitational-wave amplitude for the 11 pulsars (black triangles) vs. frequency of the search, compared with the sensitivity of the search (red dashed line for LIGO Hanford, green dashed line for LIGO Livingston). The plot shows also the theoretical maximum values of the gravitational-wave amplitude for each neutron star (blue circles). The pulsars for which the black triangles are below the blue circles are the ones for which we have obtained useful physical information, i.e., what is the maximum fraction of rotational energy loss that is due specifically to gravitational-wave emission.