Dated 29 November 2019. Read this summary in PDF format (in English) and in other languages: German

During the first and the second observing run of the Advanced LIGO and Advanced Virgo detectors, ten binary black hole (BBH) mergers were detected (these mergers are reported in the catalog of compact binary mergers GWTC-1). These detectors are sensitive only to the final stages of the BBH coalescence (up to the last few hundred orbits, depending upon the mass of the binary components), where the signal's frequency falls in the detectors' sensitive band. Most of the detected signals are thus expected to be well approximated by the signals from binaries on circular orbits: Binaries that evolve for a long time in isolation lose eccentricity as the orbit shrinks due to the emission of gravitational waves (GWs). However, there are several evolution scenarios where a BBH system can reach the very late stages of its evolution having significant residual eccentricity. These scenarios can occur in very dense stellar environments like near the center of a galaxy, globular clusters, etc. In these environments a BBH can be dynamically formed and merge in a short amount of time, allowing the system to preserve some eccentricity when it enters the sensitive band of the Advanced LIGO and Advanced Virgo detectors. Another possibility is that the BBH interacts with a third body (for example, the supermassive black hole in the center of the galaxy hosting the BBH) which increases the BBH's eccentricity through the Kozai-Lidov mechanism. The detection of a BBH merger with an eccentric orbit would provide hints about the BBH formation process, and it would suggest that such an event occurred in a dense environment. Moreover, it would provide insights about such astrophysical environments, which are not easy to probe with other experiments. In this study we focus on the detection of BBHs on eccentric orbits.

There exist preliminary models of gravitational waveforms from binary black holes on eccentric orbits. However, these models are slow to generate and also require the eccentricity to be small and the black holes not to be spinning. Due to this limitation, we use the coherent WaveBurst (cWB) algorithm to search for these sources. The cWB search looks for excess energy occurring coherently in the various detectors in the network, without making use of waveform model templates. cWB was the first algorithm to detect GW150914 and also detected many of the other BBHs in the first gravitational wave transient catalog. We have used a simplified waveform for eccentric BBH to estimate the distance to which cWB can detect such systems (the simulated waveforms for two different orbital eccentricities are shown in Figure 1). We inject these simulated signals in the data using some simple models for the expected astrophysical distribution of the binary's masses and eccentricity and then find which systems cWB can detect.

We find that the cWB search is sensitive to eccentric BBH mergers and the distance to which cWB would be able to detect such a system is very weakly dependent on eccentricity (as shown in Figure 2). The search did not identify any new binary merger candidates. We also assume that the previously detected candidates have negligible eccentricity, since they were detected by the searches that use waveform templates from binaries on circular orbits and also showed no deviations from circular waveforms in careful analyses looking for potential deviations from the predictions of general relativity (see here for more details). In the absence of any detection of eccentric BBH signals, we use the simulated signals injected in the data to estimate the upper limit on the rate of binary black hole mergers with detectable eccentricity to be roughly 100 per cubic gigaparsec per year. This means that there are fewer than about 100 eccentric BBH mergers occurring per year within a volume of 1 cubic gigaparsec.

For more information on the meaning of these figures, see the free preprint of our paper at arXiv.org.

Figure 1: Examples of gravitational waveforms for a BBH system whose components are both 10 times the mass of the sun with eccentricities of 0 (black) and 0.5 (red). The effect of eccentricity on the waveform can be clearly seen. 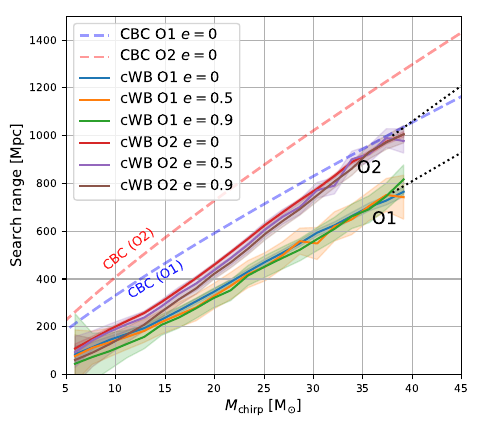 Figure 2: This plot shows the distance (in megaparsecs) to which the cWB analysis is sensitive to BBH mergers as a function of the binary's chirp mass in units of the mass of the sun. These distances are reported separately for the O1 and O2 observing runs and for different orbital eccentricities; the shaded regions represent 68 percent confidence bands. The sensitive distance is only weakly dependent on the orbital eccentricity.