Dated 12 June 2019. Read this summary in PDF format (in English) and in other languages: German .

The advanced LIGO and Virgo detectors have completed two observing runs between 2015 and 2018. To date, ten binary black hole merger events have been observed. Although there is no limit on the mass that a black hole (BH) can have, all the observed merging BHs and their remnants belong to the stellar mass black hole category – i.e. less than 100 times the mass of the Sun (denoted by M⊙). For instance, most of the galaxies in our Universe harbour a 'supermassive' black hole at their centre and they have masses surpassing 100,000 M⊙. Our Milky Way has one such supermassive black hole of its own, Sagittarius A* with a mass of approximately 4.3 million M⊙.

We have indirect evidence for the existence of these black holes in the electromagnetic window. For example, many ultra-luminous X-ray (ULX) sources in nearby galaxies are believed to be accreting BH systems with masses higher than 100 M⊙. However, there has been no confirmed unanimous detection of an IMBH so far.

There are other ways via which IMBHs can be formed. For example, massive stars in dense stellar environments could collide among themselves to form an even more massive star which will eventually collapse under its own gravity to form an IMBH. Or they could simply be black holes formed right after the Big Bang!

Why are IMBHs so important?

The detection of an IMBH will solve the missing link riddle. This will shed light on the formation of supermassive black holes and thus on galaxy formation. Further, as IMBHs are extremely heavy they also provide excellent natural laboratories to test the general theory of relativity.

How did we search for IMBH binaries?

A generic black hole binary emits gravitational wave that has a characteristic 'chirping' shape, divided into three phases: inspiral, merger and ringdown. IMBH systems have a large mass and hence radiate a large part of their energy through gravitational wave emission. But this signal can be observed by our current detectors within a very short time window. Hence, we categorize them as 'burst' signals.

We use two ways to look for these signals in the noisy data from the observing runs -- one based on 'matching' the data with available theoretical models as predicted by General Theory of Relativity. The other, more generic search, looks for consistent signals between the two detectors without imposing any constraints on their shape in the time-frequency plane. Both these searches were done up to a total mass of ~ 500 M⊙ over a range of mass ratios.

The outcome of the search

Sadly, no IMBH binary merger event was detected with this search. However, we can use this result to put limits on how often these objects merge. To do this we conducted a follow-up study using realistic simulated IMBH binary signals generated by solving Einstein's equations numerically. We scattered these simulated sources all over the sky at varying distances from us and applied our search techniques to recover them. Based on the study, we concluded several interesting results.

In Figure 1, we show the distance to which the gravitational wave detectors were sensitive to each of the selected sources using the employed search methods. This study provides an improved estimate of how frequently IMBH mergers occur per year as compared to the previous study. It shows that the merger rate reduces by almost five times to 0.7 mergers per globular cluster for two 100 M⊙ black hole system as compared to the earlier value.

In future, with improvement in sensitivity of gravitational wave detector, we will have a better understanding of the frequency of IMBH mergers. The third observing run has started collecting data from April 1, 2019 and gravitational-wave scientists are very hopeful to observe these elusive sources soon! 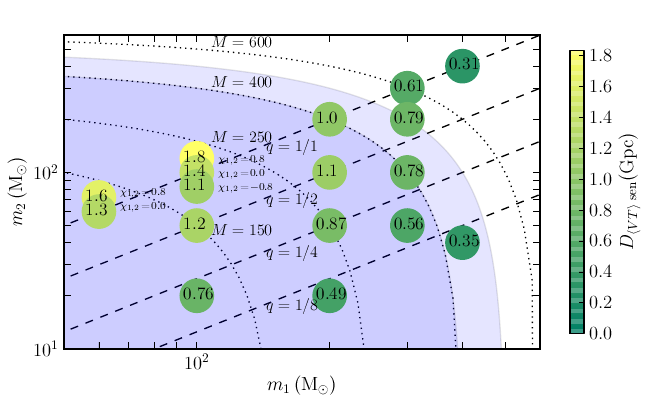 Figure 1: Sensitive distance reach (D<VT>sen) for different simulated intermediate-mass black holes are shown in the above plot. Each circle corresponds to one class of merging IMBH in the source frame and the number in the circle indicates the distance in gigaparsec (Gpc). 1 Gpc = 3.09 × 1022 km! 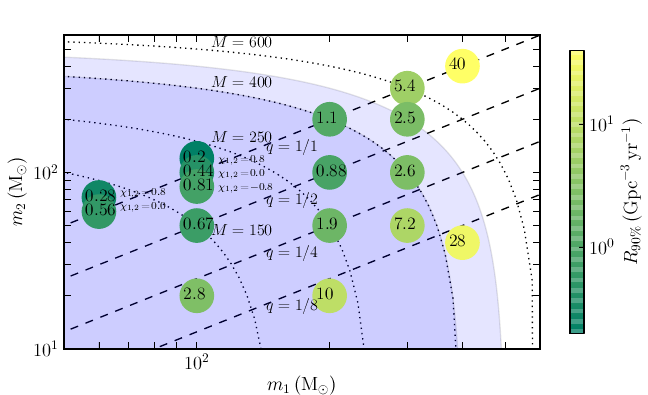 Figure 2: Rate density upper limits (at 90% confidence) (R90%) for the same systems (Fig. 1) are shown. Here the numbers in each circle is R90%. The rate is given in number of mergers per Gpc3 per year. Notice that the the tightest upper limits is for systems with total black holes mass approximately 200 M⊙ .