Searching for continuous gravitational waves from pulsars at two frequencies

There have now been a host of gravitational-wave signals detected from merging compact objects. However, the signals from these have all been transient and were only observable in the LIGO and Virgo detectors for short durations before they merged (tens of seconds for the binary neutron star merger, or seconds, or less, for the binary black hole systems.) The sources were also very distant, far beyond our own Milky Way Galaxy. The signals displayed a characteristic "chirping" form, in which the frequency, or pitch, and amplitude increased over the short duration of the signal. But, we are also searching for signals that look quite different from that chirp pattern - for example sources that are constantly "on" (i.e., continuous) and emitting at an almost fixed (or monochromatic) frequency, like a pure audio tone.

One source of gravitational waves that would be much more local and would provide a continuous signal is a rapidly-rotating compact object known as a neutron star. We have known these objects exist ever since they were first observed as pulsars, and we have now also observed the gravitational-wave signal produced as two neutron stars merged. They are the collapsed cores of massive stars that ran out of fuel and underwent a supernova explosion. With a mass of slightly more than the Sun's (∼2.8×1030 kg) packed into a sphere of radius ∼10 km, neutron stars are about 40 trillion times denser than lead. A teaspoon of neutron star material would weigh about 10 million metric tons, roughly equivalent to the weight of a small mountain on Earth. Neutron stars are also spinning very rapidly, and for some their surfaces are rotating at up to ∼10% of the speed of light. So, these stars are very extreme objects! Our best understanding is that their pulsed emission comes from beams of radiation emanating from the magnetic poles of the stars acting like a lighthouse. If the magnetic and rotation axes of the neutron star are not aligned then a pulse is observed as the radiation beam sweeps across the Earth once per rotation.

To generate gravitational waves a pulsar must have some non-symmetric distortion in its shape - e.g., a "mountain" - that is not along its rotation axis. There are various ideas about how such a distorted star could form. The distortion could be "frozen" into the crust or core of the star after it was born in the supernova, or formed from material falling onto the star, or be produced and maintained through extremely large internal magnetic fields. However, due to the huge gravitational pull at the star's surface, the material forming the "mountain" needs to be really strong so as not to be flattened out. A mountain on Earth made of jello, for example, could not get very big before collapsing under its own weight, but one made of solid rock can become as large as, or larger than, Everest. For a pulsar with a crust made up of "normal" neutron star material (highly distorted atomic nuclei, free electrons and neutrons) the maximum deformation that could be sustained before collapsing is about 10 cm, so not very high for a "mountain" (scaling up the relative dimensions this would be equivalent to a ∼50 m hill on Earth). If the star was made up from more exotic materials, e.g., if it were a solid quark star, then it could possibly sustain a mountain up to ∼10 m in height. The mountain size can also be expressed in terms of the star's ellipticity (ε), which is a rough measure of the distortion's size as a fraction of the star's radius.

Making a few reasonable assumptions we can estimate the maximum amplitude of gravitational waves being emitted by most pulsars. To do this we use the law of conservation of energy. Pulsars are seen to slow down (known as spin-down) over time. This spin-down takes a very long time, and even the most rapidly spinning-down objects only decrease in frequency by less than a hundredth of a Hertz (or equivalently, increase their periods by less than ten microseconds) over a year. But, given the huge moment of inertia that the stars possess, this still represents a very large loss in rotational energy, corresponding to a power of ∼1031 Watts, or well over ten thousand times the Sun's luminosity. If we assume that all of this energy is being lost by emission of gravitational waves we can calculate the amplitude those waves would have on arrival at the Earth. This is called the "spin-down limit". When our searches are sensitive enough to reach below this limit we start probing interesting new territory, where gravitational-wave signals could be detectable. We do, however, know that the spin-down limit is a naive upper limit, in that a large part of the spin-down can also be attributed to other mechanisms, such as magnetic dipole radiation.

There is also the possibility of neutron stars emitting gravitational waves at their rotation frequency. If the star is precessing, i.e., its axis of rotation is itself moving and tracing out a circle like a wobbling spinning top, then such emission would be present. However, there is no strong observational evidence of any pulsar exhibiting precession. There is instead another possibility for emission at the rotation frequency without the need for precession. If the star has a superconducting core that is not completely locked to the star's crust, and their moments of inertia are not aligned, such emission could be present.

In this new analysis we have searched for signals from a total of 221 pulsars using combined data from both the first and second observing runs of the Advanced LIGO and Virgo detectors (called O1 and O2, respectively.) The search has assumed two emission models: one at purely twice the rotation frequency and another allowing emission at both once and twice the rotation frequency. This is the first time the LIGO Scientific Collaboration and Virgo Collaboration have performed a search for emission from specific pulsars at both once and twice their rotation frequencies. To help reach the best sensitivity, we have used information about these pulsars obtained through radio, X-ray and gamma-ray observations; these have provided very precise knowledge of the pulsars' positions, rotational frequencies, and how their frequencies change over time. This information has allowed us to accurately track any potential gravitational-wave signal in our data over the whole length of the science run (a search method called "coherent integration".)

From these searches we were not able to detect evidence for gravitational radiation from any of the pulsars at either frequency. But, due to the longer observing run and increased detector sensitivity compared to O1 alone, we have produced the most sensitive upper limits yet, and for 20 pulsars these observations have produced limits (using three largely independent statistical methods) on the gravitational-wave amplitude that are below the spin-down limits. Two of the pulsars that have long been of interest for gravitational wave searches, due to their large spin-downs, are the Crab and Vela pulsars. For these pulsars we have now surpassed the spin-down limit by a factor of 70 and 20 respectively. From this we can say that, respectively, less than ∼0.02% and 0.2% of their spin-down energy loss is due to gravitational radiation. We can also limit the ellipticity of the stars, and say that there are no "mountains" on the Crab pulsar greater than ∼3 cm in height, and none on Vela greater than ∼20 cm. Among the other pulsars, we found 32 more that are within a factor of ten of the spin-down limit. From the gravitational-wave data alone we can limit the "mountain" size for some of these to less than ∼0.1 mm, although the spin-down limit is more stringent for those pulsars.

The pulsars for which we have surpassed the spin-down limit are all relatively young (thousands to tens of thousands of years old), and are spinning down rapidly. Therefore, they generally have a large spin-down power. This is good in terms of there being a large amount of energy available such that a significant fraction could go into gravitational-wave emission, but conversely it would required that the stars were quite highly distorted for that to happen. The size of the required mountains is close to, or larger than, the maximum values that theories suggest are allowable. However, the majority of pulsars in our search are actually far older millisecond pulsars. These stars are actually spinning faster than their younger counterparts! The reason for this it that they have been spun-up to fast rotation rates by stealing angular momentum from a companion star. They are either in, or have previously been part of, a binary star system, and have accreted material from their companion to spin them up. This process makes them spin-down far more slowly, most likely by greatly reducing their external magnetic field strength. These pulsars therefore have a smaller spin-down limit than the young pulars, and less energy available to go into gravitational-wave emission. But, emission of gravitational waves at their spin-down limits would only require them to have small mountains (less than about 0.1 mm), which are sustainable by many theories.

In our current analysis there are 41 millisecond pulsars for which the observed limits are within a factor of 10 of their spin-down limits. For one of these, J0711-6830, which at a distance from Earth of about 360 light years is one of the closest pulsars, our result is only a factor of 1.3 above its spin-down limit. For some of these pulsars the upcoming third observing run of the LIGO and Virgo observatories could allow us to surpass several of these limits, giving us the opportunity to probe stars with very small distortions. 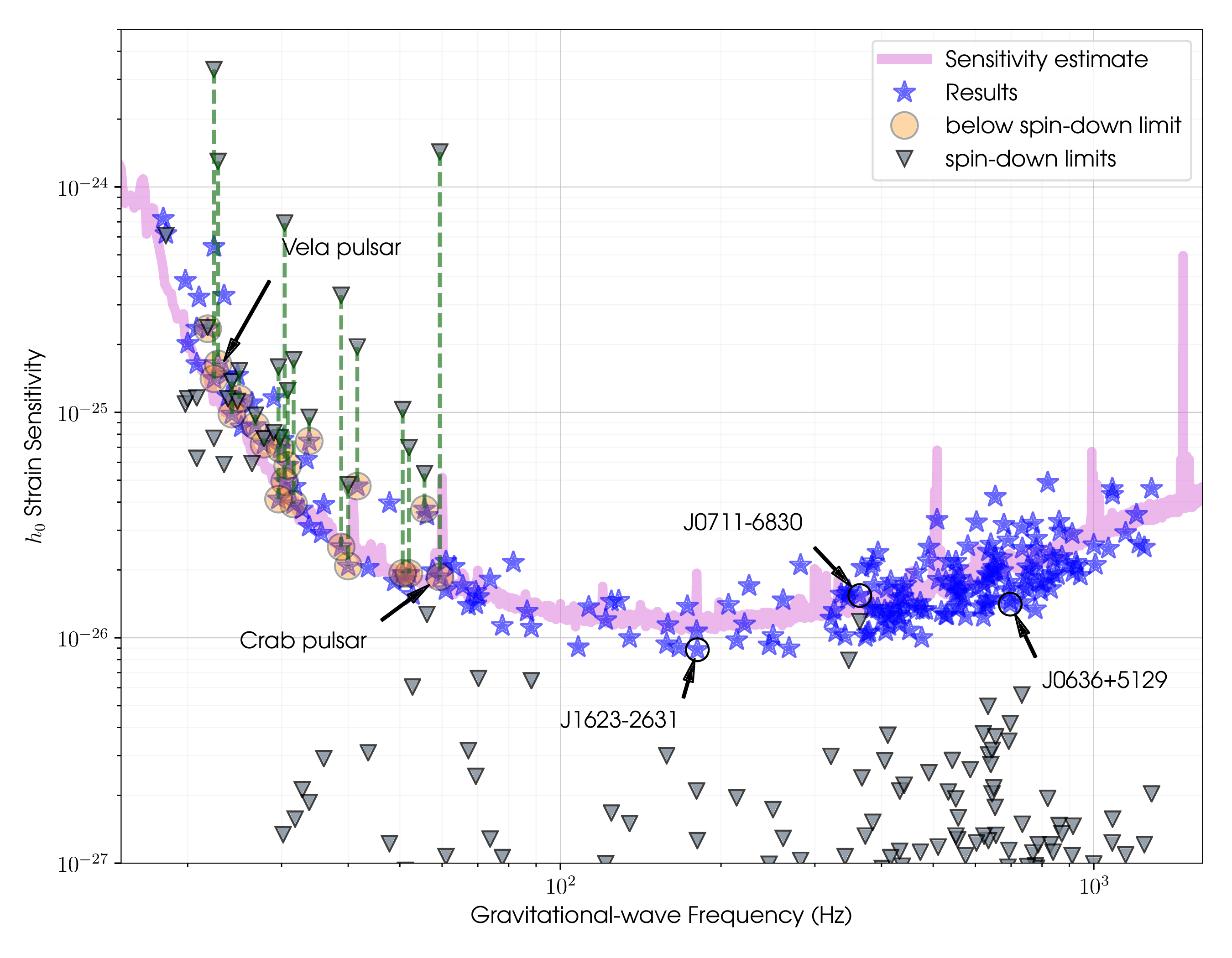 The stars in this plot show the upper limits on the gravitational-wave strain amplitude for 221 pulsars using data from the first and second Advanced LIGO observing runs. The triangles show the spin-down limits for a these stars. The pulsars for which our observations have surpassed the spin-down limits are highlighted with circles. The underlying curve gives an estimate of the expected sensitivity of the run. 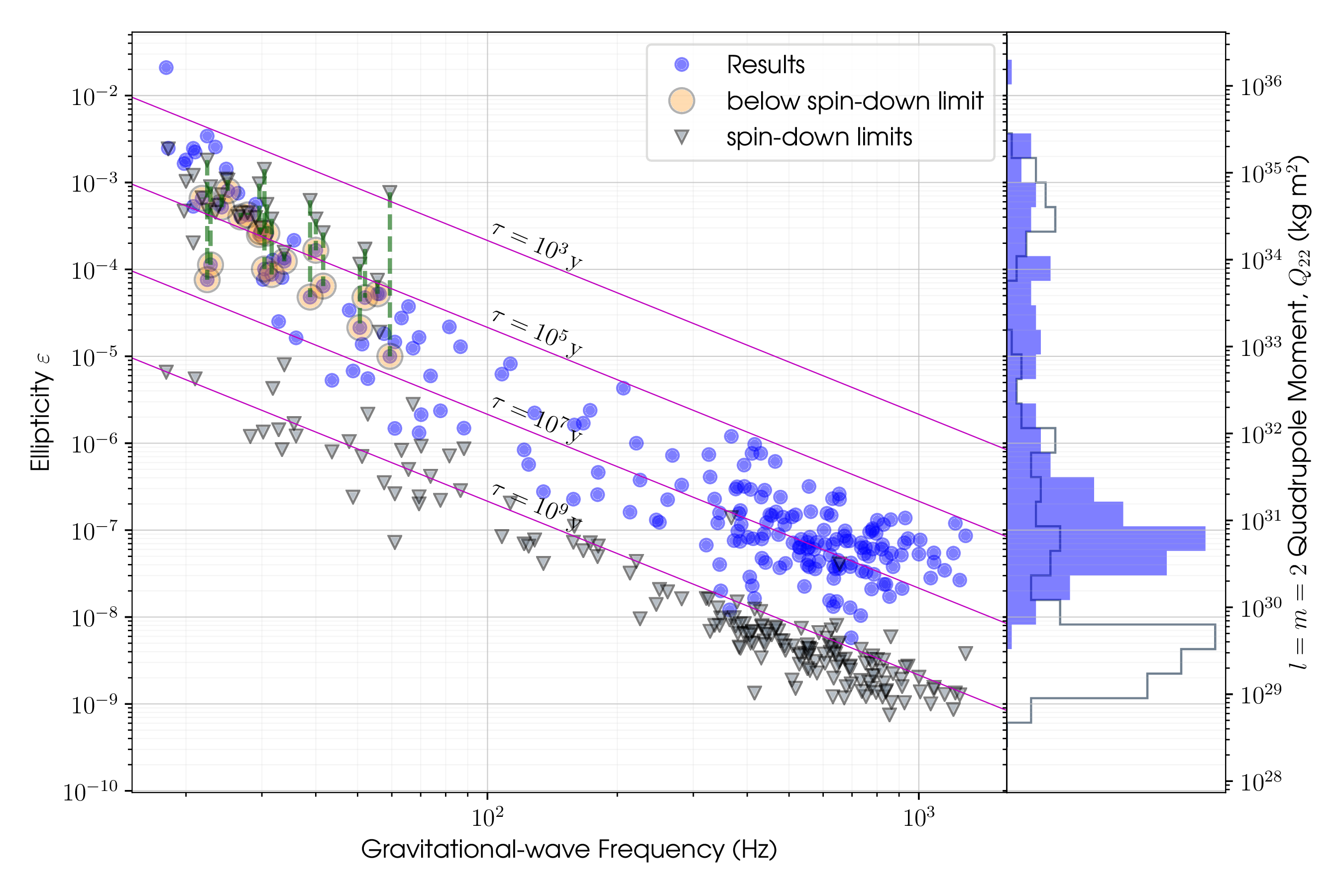 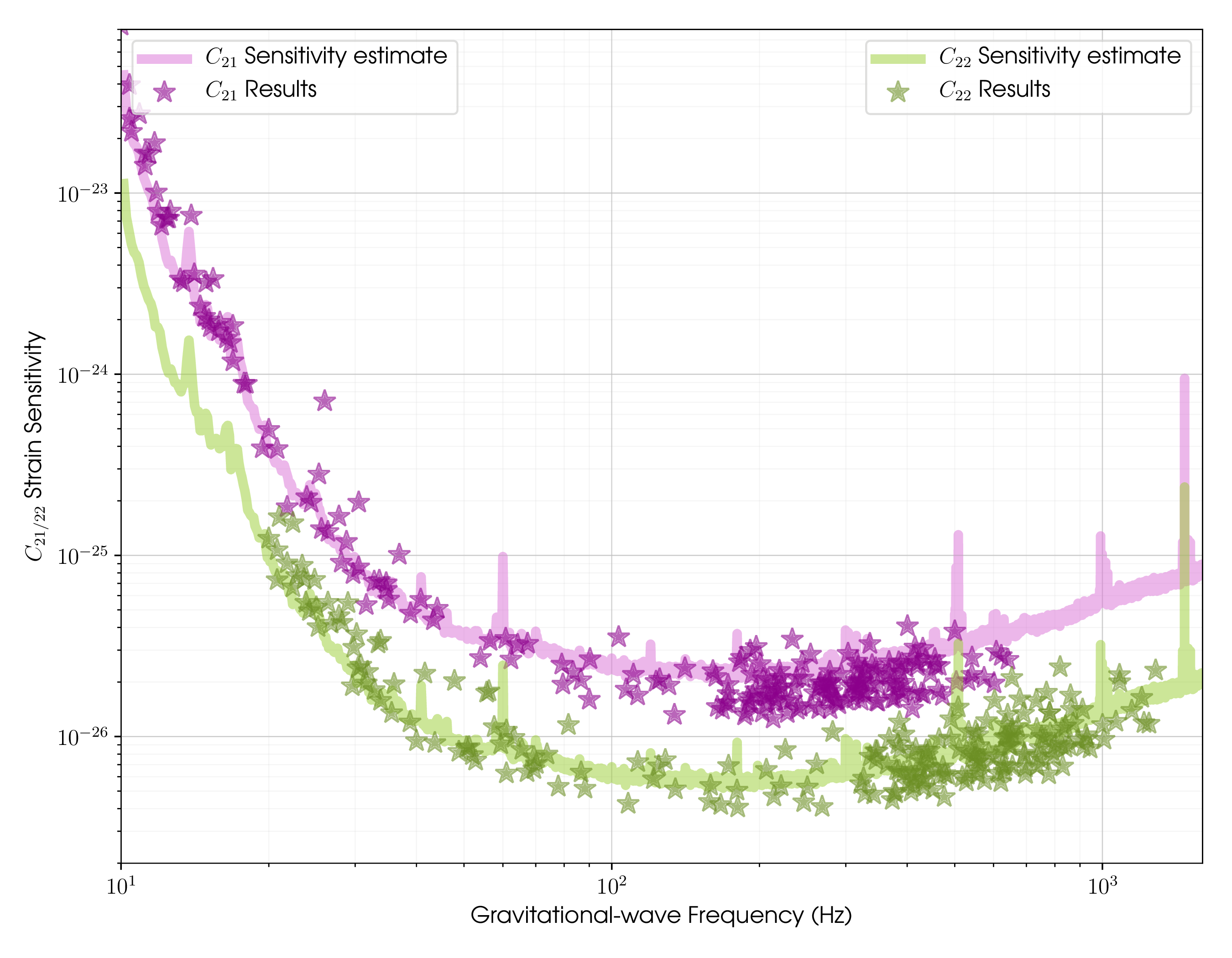 The purple and green stars in this plot show the upper limits on the gravitational-wave strain amplitude for 221 pulsars assuming emission at once and twice their rotation frequency, respectively, using data from the first and second Advanced LIGO observing runs. The underlying curves give estimates of the expected sensitivity of the run for searches at either frequency.