Dated 01 April 2019. Read this summary in PDF format (in English) and in other languages: German .

In addition to binary-black-hole mergers like GW150914 and GW170814, and binary-neutron-star mergers like GW170817, LIGO may detect other sources of GWs such as supernovae, pulsars, or even the stochastic gravitational-wave background from the Big Bang. In the next few years, a larger world-wide network of GW detectors will join LIGO and Virgo in their search for a wide-range of yet undetected astrophysical phenomena offering strong potential for new science. One interesting class of signals is intermediate-duration gravitational waves whose gravitational-wave energy is spread over a long period of time. These could arise from objects like compact binary coalescences with eccentricity, matter asymmetrically falling into a newborn neutron star, and slight deformations on magnetar surfaces, all of which can generate gravitational wave signals lasting for a few seconds up to several minutes. Although these are exciting sources, the models for many of these objects are uncertain, and searches must comb through long segments of data. Here we present a search that uses a variety of techniques designed to be sensitive to signals using minimal assumptions and is therefore capable of detecting astrophysical signals of this type.

The analysis and the results

Four different pipelines are used to search the space of possible timescales and frequencies for these intermediate-duration gravitational-wave transients. The data contain a large number of non-Gaussian transient noise events (glitches) of instrumental or environmental origin that mimic the characteristic of the targeted signals. For the first time, well-identified sources of noise that are continuously present have been subtracted from the LIGO data. The effect of the remaining transient noise events are mitigated by each pipeline by implementing specific glitch rejection criteria; short-duration glitches (which are usually the most problematic sources of noise) are easily suppressed because the search targets intermediate-duration signals. It is shown that all pipelines are complementory to cover the large variety of possible signal waveforms. We report the pipeline's sensitivities on both astrophysical and "ad-hoc" models. None of the pipelines found a significant excess of events coincident in both Hanford and Livingston simultaneously. The loudest events in the 118 days of coincident detector data are consistent with being noise. Given the absence of a detection, we derive upper limits on the strain amplitude of intermediate-duration gravitational-wave transients, and we also set limits on the rates of these objects occurring in the Universe.

For more information on the meaning of these figures, see the free preprint of our paper at arXiv.org.

Figure 1: Time-frequency representations of a few model signals used in the search, showing a mix of chirp-up (FA, ECBC) and chirp-down (Magnetar, ADI) astrophysical waveforms, as well as a linearly decreasing ad-hoc waveform (LINE). The harmonics of ECBC are also visible. The set of waveforms chosen for this analysis fully covers the search frequency band of 24-2000 Hz. 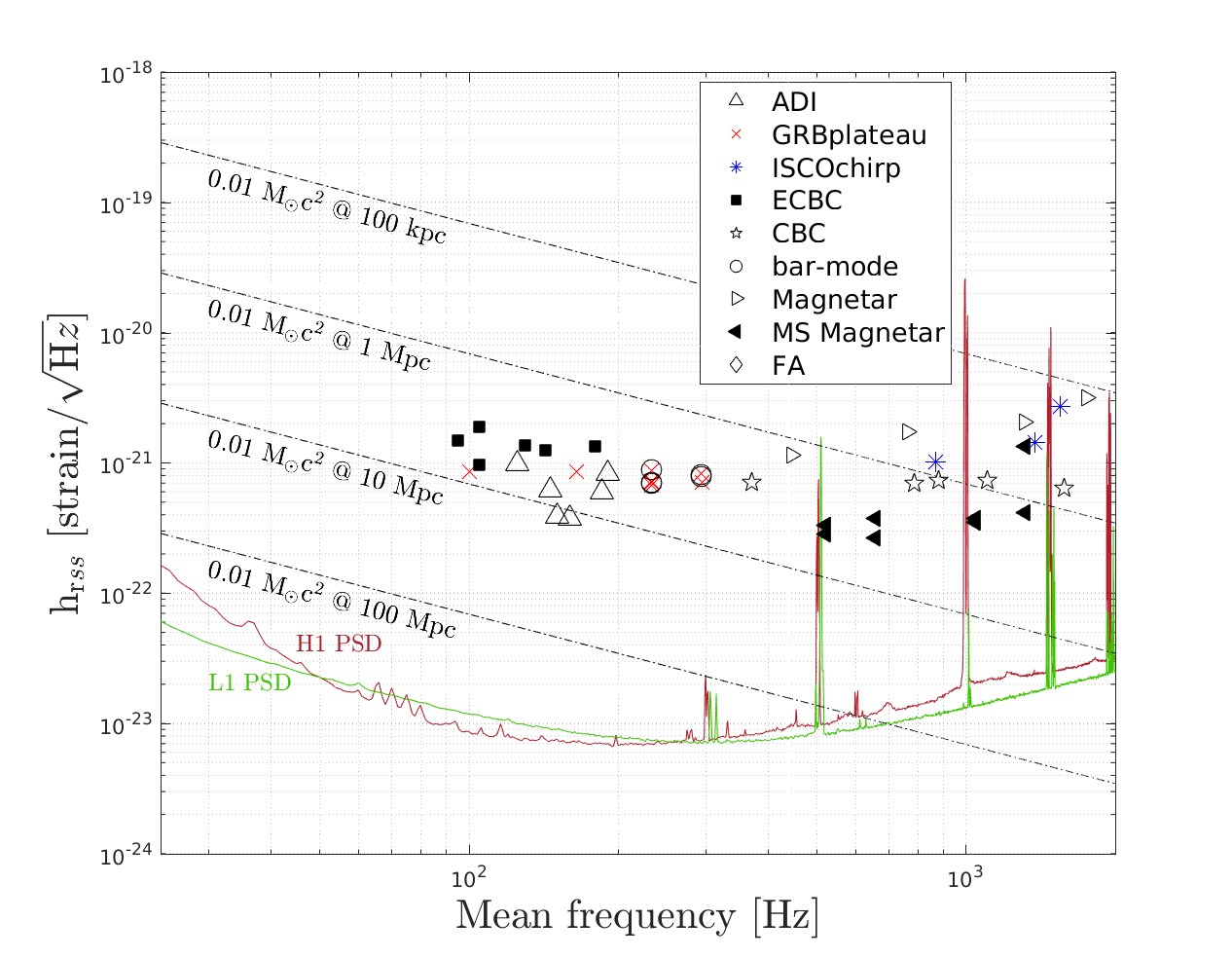 Figure 2: Upper limits on gravitational-wave strain versus frequency for sources detected with 50% efficiency and a false alarm rate of 1 event in 50 years. The lowest value among all 4 pipelines used is represented in the plots. The average power spectral density curves for both Hanford and Livingston are also shown.