Dated 12 July 2019. Read this summary in PDF format (in English) and in other languages: German .

At the conclusion of the second Observing run (O2), Advanced LIGO and Advanced Virgo had detected gravitational waves from ten binary black hole mergers, and one binary neutron star merger. Black hole and neutron star mergers are not the only predicted sources of gravitational waves. There is a wide range of other potential sources, ranging from signals that last a long time, to ones with a very short duration (like the binary black hole signals). Here we focus on searching the latter category-- what we call short-duration gravitational-wave transients. Besides the binary black hole signals, some examples of potential short-duration gravitational-wave sources are supernovae, pulsar glitches, cosmic string cusps, as well as the possibility of totally new unpredicted sources.

For some short-duration sources, such as binary black holes or cosmic strings, there are well understood models for the waveforms of these signals and they can be searched for using a technique called ''matched filtering''. Some other sources do not have robust (or even any) waveform models. This means it's important to have methods to detect gravitational waves from almost any source. Here we use three different pipelines that search for short-duration gravitational waves with little to no assumptions on where in the sky the signal will come from, or what shape that signal will take. We call these ''unmodeled'' searches. The unmodeled searches are not as sensitive as matched filter searches, but have the advantage of being more flexible, and can detect a wider variety of signal sources. One complicating factor in the searches for short-duration gravitational waves is the presence of instrumental noise artifacts, which are called ''glitches''. If glitches occur in two or more detectors at once, we could possibly confuse them for a real gravitational-wave event. The unmodeled analyses are designed to be able to distinguish between these glitches and real events.

Cosmic strings are hypothetical one-dimensional (like a line) objects that may have formed in the early Universe. They were first introduced by a theoretical physicist, Tom W. B. Kibble, in the late 1970s. Efforts have been carried out to find them, but there is currently no observational evidence of the existence of cosmic strings. Emitting gravitational waves is the main way for cosmic strings to get rid of their energy. When a string in a cosmic string network crosses itself, a loop separates from the string. It oscillates and radiates gravitationally. Strong gravitational emission occurs at the pinch-off points of the loop, the cusps, which move with a velocity close to the speed of light. Gravitational-wave bursts emitted by cusps are one of the promising observational signatures of cosmic strings. Searching for these signals by gravitational-wave detectors like Advanced LIGO and Advanced Virgo would give us novel understanding of the very early universe. The signals from cusps are well modeled from theory, thus it is possible to perform a matched filter search for these transient signals.

Neither the unmodeled searches nor the search for cosmic string cusps found any new gravitational waves. The unmodeled pipelines found almost all of the binary black holes in O2 that were presented in the first Gravitational-wave Transient Catalog. Even without the detection of new signals, we can still give some astrophysically interesting results. By using simulated signals, we can determine how sensitive we are to transient events at various frequencies. We then place upper limits on the rate at which these events are happening in the universe. Because we are focusing here on uncovering new gravitational-wave sources, we place upper limits on the rate of gravitational-wave events occuring form sources other than binary black hole mergers. For the case of cosmic strings, we were able to put constraints on models that predict the distribution of loops. More precisely, for each model we were able to put upper limits on the parameter called the string tension. This parameter reflects the age of the universe when cosmic strings have formed. These observational results can be compared with theoretical models of the early universe.

For more information on the meaning of these figures, see the free online prepint of the paper . 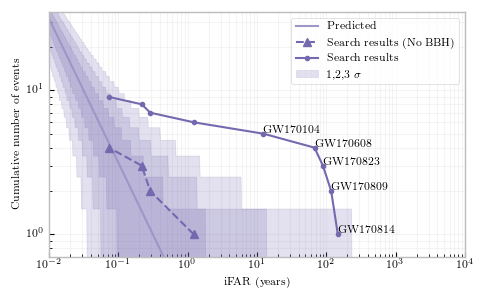 Figure 1: Search results from one of the unmodeled pipelines. The plot shows the cumulative (meaning the sum) of all the triggers in the search versus their False Alarm Rate (a measure of how significant the trigger is). This plot shows the results with and without known binary black hole signals. Besides the binary black hole signals, there were no significant events. Please see the paper for the results from all the pipelines. 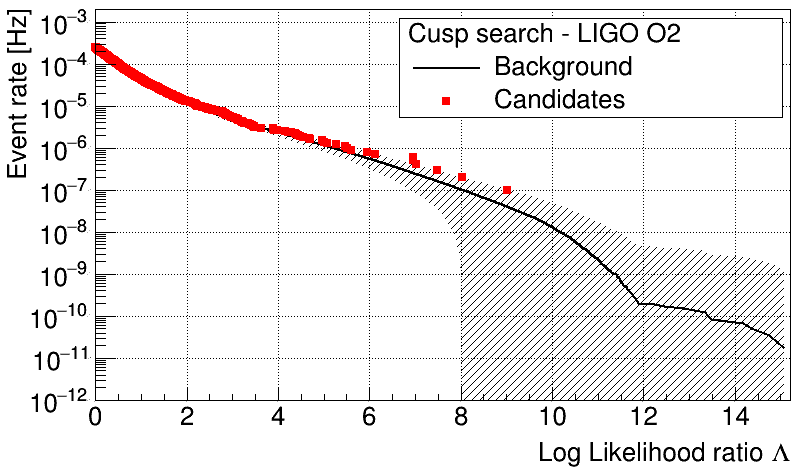 Figure 2: Search results from the cosmic string search. The plot shows the cumulative (meaning the sum) number of all the triggers in the search higher than a given ranking statistic (also a measure of how significant the trigger is). As with the unmodeled search, all of the potential candidates in the search are consistent with what we expect from accidental noise fluctuations.