Since 2015, Advanced LIGO and Virgo detectors have demonstrated their capacity to detect gravitational waves from the inspiral and merger of two compact objects, which include neutron stars and black holes. These discoveries have been recently summarized in a first catalog, GWTC-1. Gravitational waves are new messengers to understand the violent Universe, giving properties of the compact binary systems (masses, spins, angular momentum) during their coalescence and their collision. On the other side, the electromagnetic radiation and high-energy particles emitted by these systems, known as counterparts, bring information about matter acceleration mechanisms as well as precise localization of the event that is useful to understand the environment of the event and the ejecta properties. The LIGO-Virgo scientific collaborations have established a multi-messenger program over the last decade to ease the combined search of electromagnetic signals, high-energy particles and gravitational waves. One strategy employed is to run near real-time analyses to find candidates for gravitational-wave detection, and release to the astronomical community those alerts to enable follow-up in multiple wavelengths. The analysis and alert needs to be fast because electromagnetic counterparts fade rapidly, meaning they are visible for only a short amount of time. In addition, the follow-up with telescopes takes time, and telescope time is limited. In this sense, the potential gravitational-wave events must be vetted and communicated quickly. This strategy lead to the first multi-messenger detection, GW170817, enabling for the first time, a global picture of the collision of two neutron stars as explained here.

In the present article, we motivate the need for electromagnetic/neutrino follow-up of gravitational-wave candidate events from Advanced LIGO and Advanced Virgo to learn more about the central engines of violent astrophysical events such as core-collapse supernovae and compact binary mergers. We provide an outline of our low-latency follow-up program and its results and summaries from the second observing run, O2, which lasted from November 30, 2016 to August 25, 2017. Historically speaking, O2 is significant because it is marked by two things: (1) the joining of the European ground-based detector, Virgo, to form a three-detector network and (2) the discovery of the first observed binary neutron star merger, GW170817, which is also the first multi-messenger discovery involving gravitational waves.

Low-latency searches for gravitational waves come in two types: modeled and unmodeled. The modeled searches look specifically for signals from the last few cycles of compact binary systems consisting of neutron stars and black holes. When these systems coalesce and merge, they stretch and squeeze space-time in a manner that can be predicted from Einstein's equations in General Relativity. The time and frequency evolution of this stretching and squeezing is specific to the properties of the system that actually merges: namely, the masses, matter properties, and spins of the objects involved. Thus, our modeled searches use hundreds of thousands of these solutions in parallel to search in real-time for gravitational waves produced by any compact binary system in incoming data from the various detector sites.

The unmodeled searches look for transient bursts of energy in the form of gravitational waves. Many different types of astrophysical phenomena fall under this category, including the compact binary mergers and core-collapse supernovae mentioned previously. These searches are performed in the data recorded by the different detectors -- thousands of kilometers apart and looking for signals of a similar frequency and duration profile.

Once a gravitational-wave trigger is approved for follow-up, it is elevated to candidate event status and information about it is quickly communicated to the astronomers. For this purpose, we utilize NASA Gamma-ray Coordinates Network (GCN), for alert distribution. GCN supports two types of alerts: Notices and Circulars, where Notices are machine-readable and Circulars are human prose. During O2, each time we notified the outside community regarding a gravitational-wave candidate event, we sent a Notice and a corresponding Circular. Typically, the latency for sending Initial Notices varied between tens of minutes to hours and on the order of hours for Initial Circulars. The sending of the Initial Notice/Circular signified the candidate event had been vetted by experts within the LIGO and Virgo scientific collaborations and contained the most up-to-date sky localization probability map to facilitate follow-up. For compact binary merger candidates, information regarding source classification was also included in the alerts, since binaries involving neutron stars are more likely to produce counterparts.

In the entirety of O2, there were 14 total low-latency gravitational-wave candidate events. By low-latency, we mean the triggers found during real-time analysis of incoming detector data. Of these, six are now confident gravitational-wave detections (all of them compact binary mergers), one was retracted as likely correlated with high seismic noise at the sites, and seven are of no further interest as they either did not show up in the deeper analysis of the data or were shown to be consistent with background noise.

For more information on these figures and how they were produced, read the freely available article. 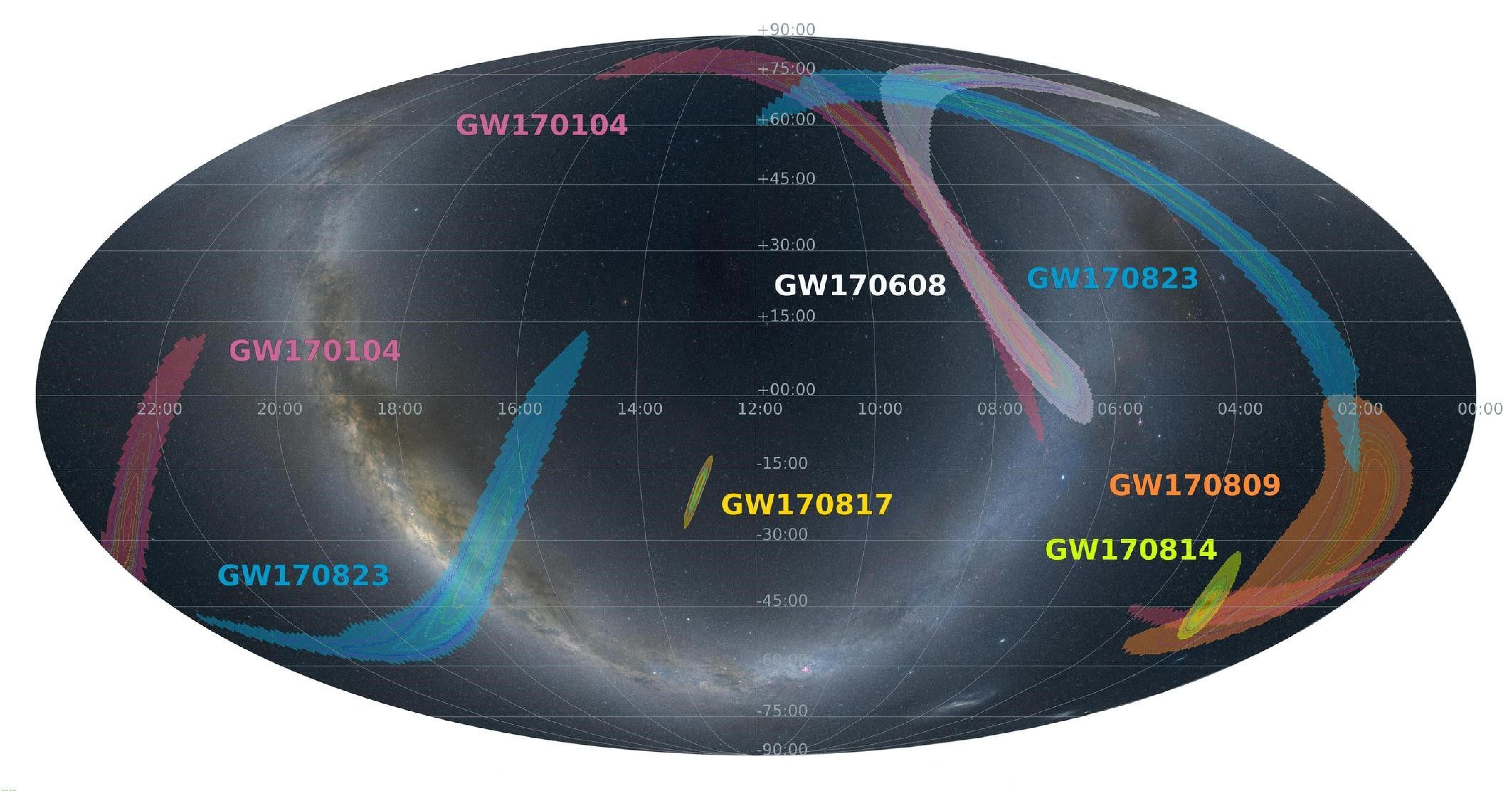 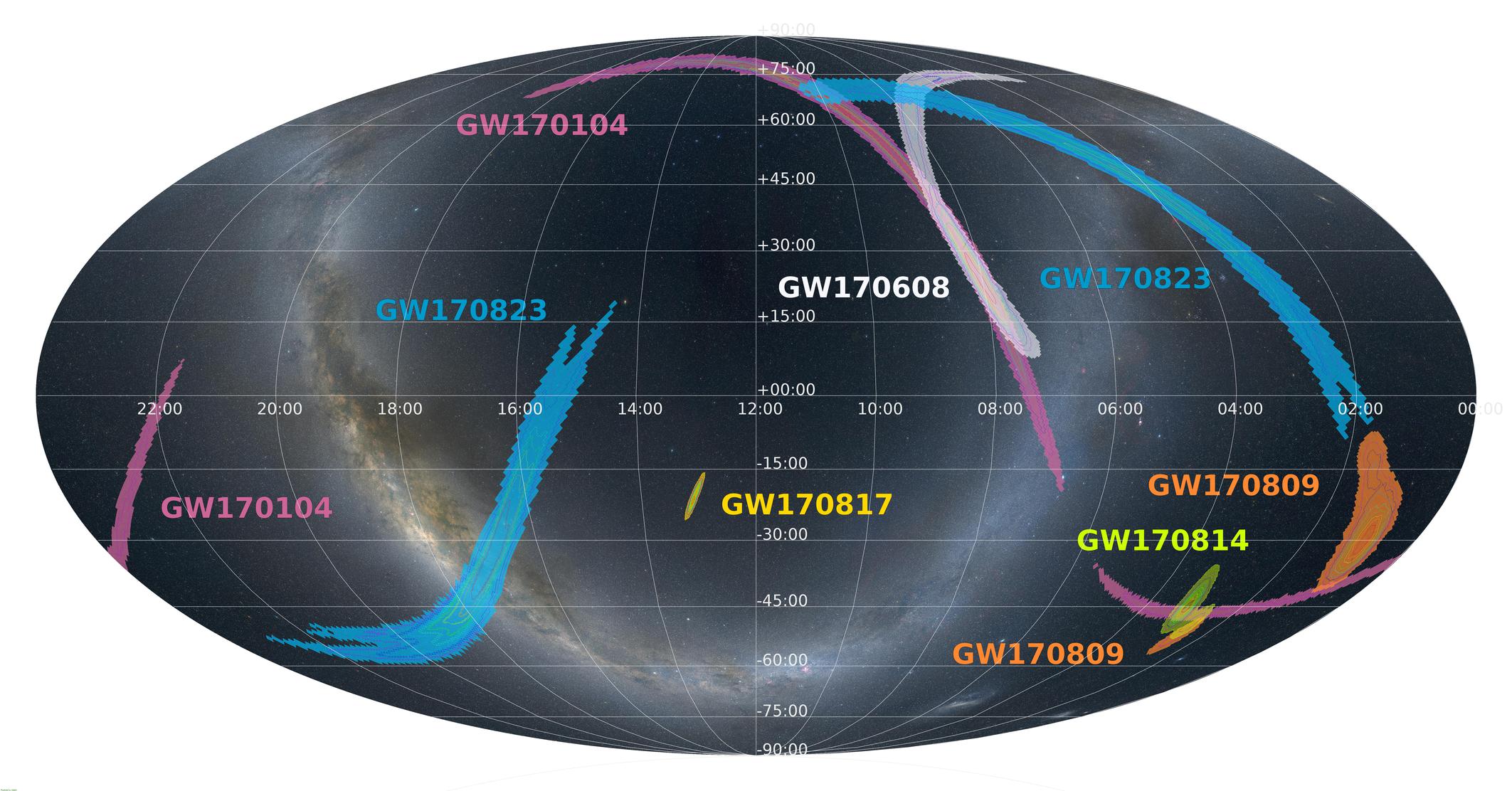 Figure 2: Distributed O2 gravitational sky areas of confirmed gravitational waves events using offline analysis in ICRS (International Celestial Reference System) coordinates. The shaded areas correspond to the confidence region that encloses 90% of the localization probability. The improvement of localization could reach up to a factor of two. (Adapted from Figure 3 of our article. Note that slightly updated sky localizations and distance estimates have been published more recently in the GWTC-1 catalog. This figure has been updated to match these latest results. )