This study uses Advanced LIGO and Advanced Virgo together with the gamma-ray telescope Fermi/GBM to look for gamma-ray bursts associated with gravitational waves. Detecting such pairs of signals can provide important information about mergers of neutron stars and black holes. The search rediscovers the known signals associated with the neutron star merger GW170817. No other confident associations between gamma-rays and gravitational-waves are found.

Once a gravitational wave has been detected by the LIGO and Virgo interferometers, one of the questions that can be asked is: did the same source also emit other signals, such as a flash of light (electromagnetic radiation) or a burst of neutrinos? The observation and study of an astrophysical event via multiple kinds of signals is called multimessenger astronomy and is a major research effort. The different messengers originate from different regions of the source and from different physical processes. Each messenger coverys unique information which can be pieced together to improve our understanding of the source. Imagine entering into an unknown building while being blindfolded, and trying to understand what is happening inside the building. You may be able to hear the presence of people and listen to their conversations, which would allow you to draw some conclusions. However, being able to also see what they do would give you a much more detailed comprehension of their activities. Similarly, gravitational waves allow us to sense the dynamics of the source, while light allows us to literally see its environment.

A promising combination for multimessenger astronomy is a burst of gravitational waves accompanied by a near simultaneous gamma-ray burst (GRB): a flash of highly energetic light. Such a combination is promising because it is expected to arise from at least two kinds of violent astrophysical events: the collapse of an old star into a compact object (i.e., a neutron star or a black hole) or the merger of a neutron star with another compact object. The merger of two neutron stars has indeed been observed with the discovery of the gravitational-wave signal GW170817 and the associated gamma-ray burst GRB 170817A. That observation was a perfect demonstration of how the different messengers can contribute to our understanding of an astrophysical event.

The gravitational-wave signal from a merger has a characteristic shape, enabling us to identify it, and in the luckiest cases determine whether the merger involves two neutron stars, two black holes, or one of each kind. This signal also allows us to localize the source in space, albeit with a limited precision. An associated GRB, on the other hand, indicates the presence of material around the source. This is a strong indication that at least one of the compact objects was a neutron star: there have been some ideas about how the merger of two black holes could result in the emission of light, but these have yet to be confirmed by definite observations. From the brightness and spectrum of an observed GRB, we can make some deductions as to what might have accelerated the matter enough to emit gamma rays. In many astrophysical models, the gamma rays indicate the formation of a final black hole after the merging of two neutron stars. Depending on the characteristics of the instrument that observes the GRB, it may also be possible to identify where the gamma-ray signal came from, and combine such a localization with the one obtained via the gravitational waves, resulting in an even more precise localization.

The Fermi Gamma-ray Space Telescope is a satellite designed to discover and study various kinds of signals in the gamma energy band. One of the instruments on Fermi, the Gamma-ray Burst Monitor (GBM), can detect GRBs arriving from any direction in the sky, as long as that direction is not hidden behind the Earth from the point of view of the satellite. GBM is also able to localize the source and has a high time and energy resolution, which are important to characterize GRBs. These capabilities make GBM an excellent instrument to search for transient gamma rays associated with gravitational-wave events. However, the analysis used by GBM to routinely report GRBs in real time is limited by technical constraints, and may hence miss weak gamma-ray signals.

In this study, we consider the gravitational-wave events from the recent GWTC-1 catalog released by the LIGO and Virgo collaborations, and we use the GBM instrument on Fermi to search for associated GRBs. A similar study has been previously presented using events from the first observing run of Advanced LIGO. This study updates the results to include the second observing run, and uses an improved method that accounts for the reliability of the gravitational-wave event and the probability that the event was visible to Fermi. The second observing run contained the already detected GW170817 / GRB 170817A, and we expect that event to show up in our results. The main point of the study is to see whether there are other events that were not previously detected, for instance because their GRB emission was too weak to generate a robust detection in Fermi/GBM.

As expected, we find the previously detected multimessenger event GW170817 / GRB 170817A. Our most sensitive analysis also finds a previously known, potential weak GRB associated with GW150914, identified in our early analysis of GBM data at the beginning of LIGO's first observing run. Although this event shows up among the most interesting results of our new study, it continues to be a debatable candidate: its statistical significance is not sufficient to claim a confident detection. The existence of this candidate continues to motivate us to search for gamma-ray transients associated with binary black hole mergers.

Except for GW170817 / GRB 170817A and the debatable GW150914 counterpart, in this study we found no other significant associations between gravitational waves and GRBs. This does not necessarily rule out an emission of gamma rays from some of the events in the GWTC-1 catalog. For instance, an event may have been behind the Earth from the point of view of Fermi, making the GRB undetectable. It is also possible that one of the many gravitational-wave candidates not included in GWTC-1 could have an associated GRB signal detectable in GBM. However, those candidates are less likely to be astrophysical than the events considered in this study. Moreover, the GBM signal would have to be sufficiently strong to be detectable by our most sensitive search, but not strong enough to have generated an independent discovery soon after it reached Earth.

We are now working to update this study with the third observing run of Advanced LIGO and Advanced Virgo, which contains many additional gravitational-wave discoveries, including very plausible neutron star mergers. Preliminary results of Fermi/GBM analyses around such discoveries have already been reported on the Gamma-ray Coordinates Network and so far indicate no strong GRB candidates. 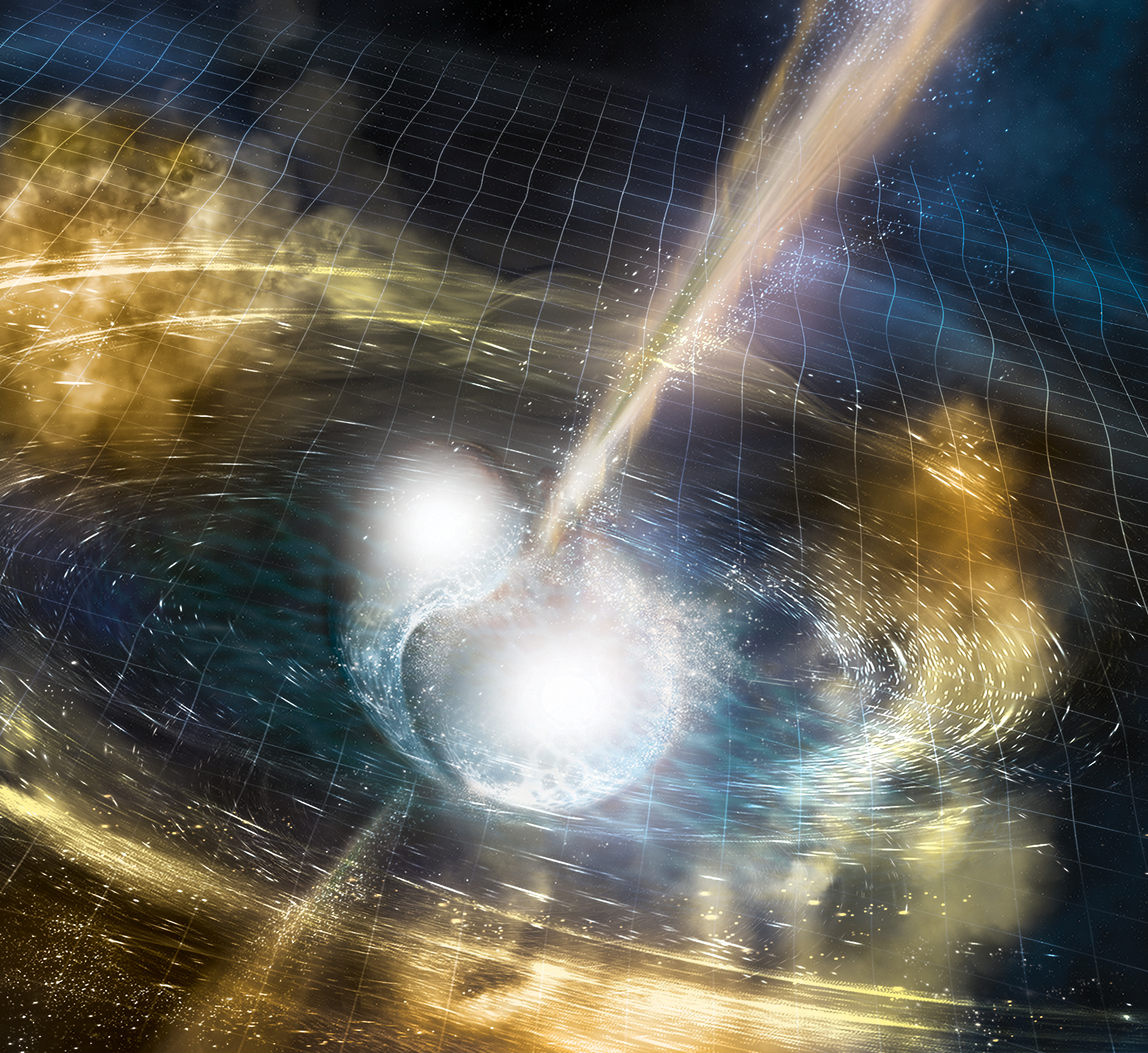 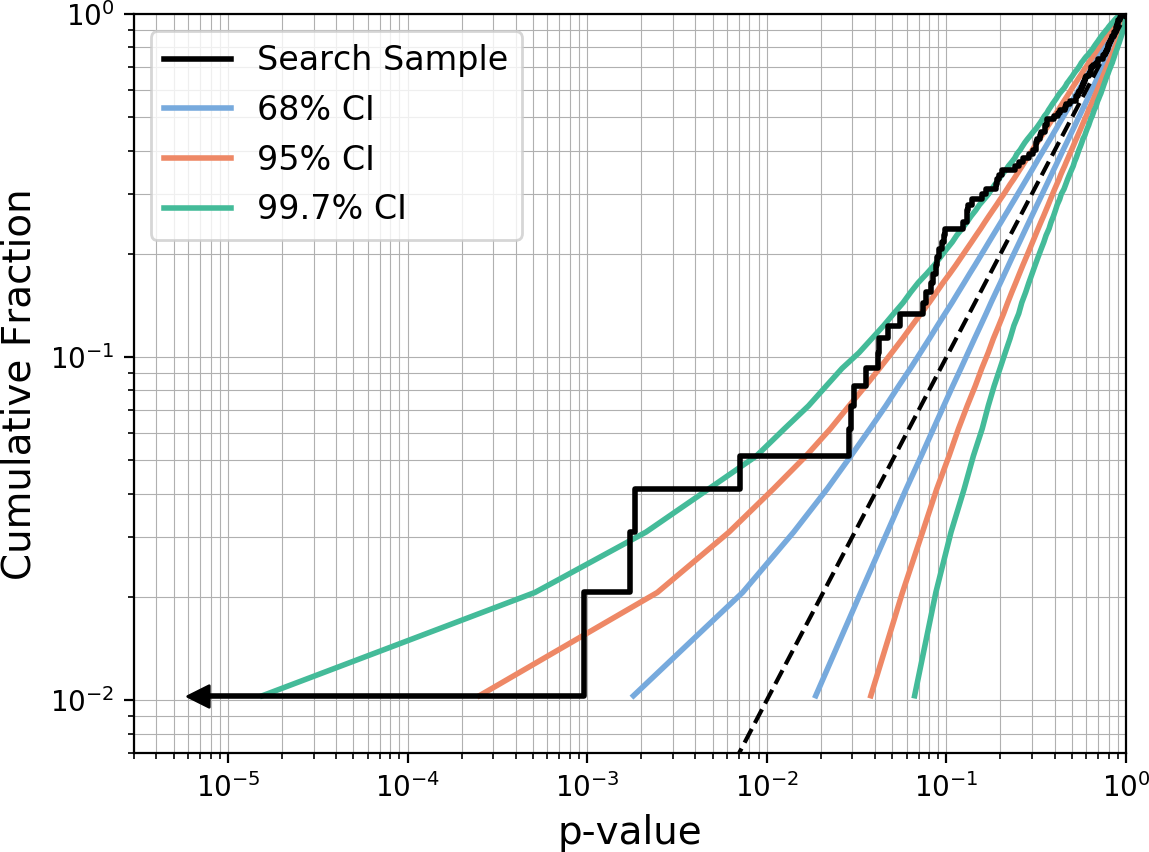 The above plot represents the results of the Targeted Search for weak short GRBs associated with the gravitational-wave events from LIGO and Virgo's first and second observing runs. Each step of the black staircase represents a candidate gamma-ray event. The corresponding p-value represents the probability for such a candidate to be produced by noise. Candidates toward the right of the plot are the most likely to be noise. Candidates to the left are the most interesting ones. The vertical axis represents how many candidates we have obtained at each p-value (or smaller). If all candidates were due to noise, the black staircase should stay almost always within the area delimited by the green curves.

Instead, the black curve wanders to the left of both green curves. This indicates that at least one of the gravitational-wave events is associated to a GRB, and the association is very unlikely to occur just by random chance. The interesting association in this case is between GW170817 and GRB 170817A, already known before producing these results. Our search, therefore, is consistent with the previous discovery. 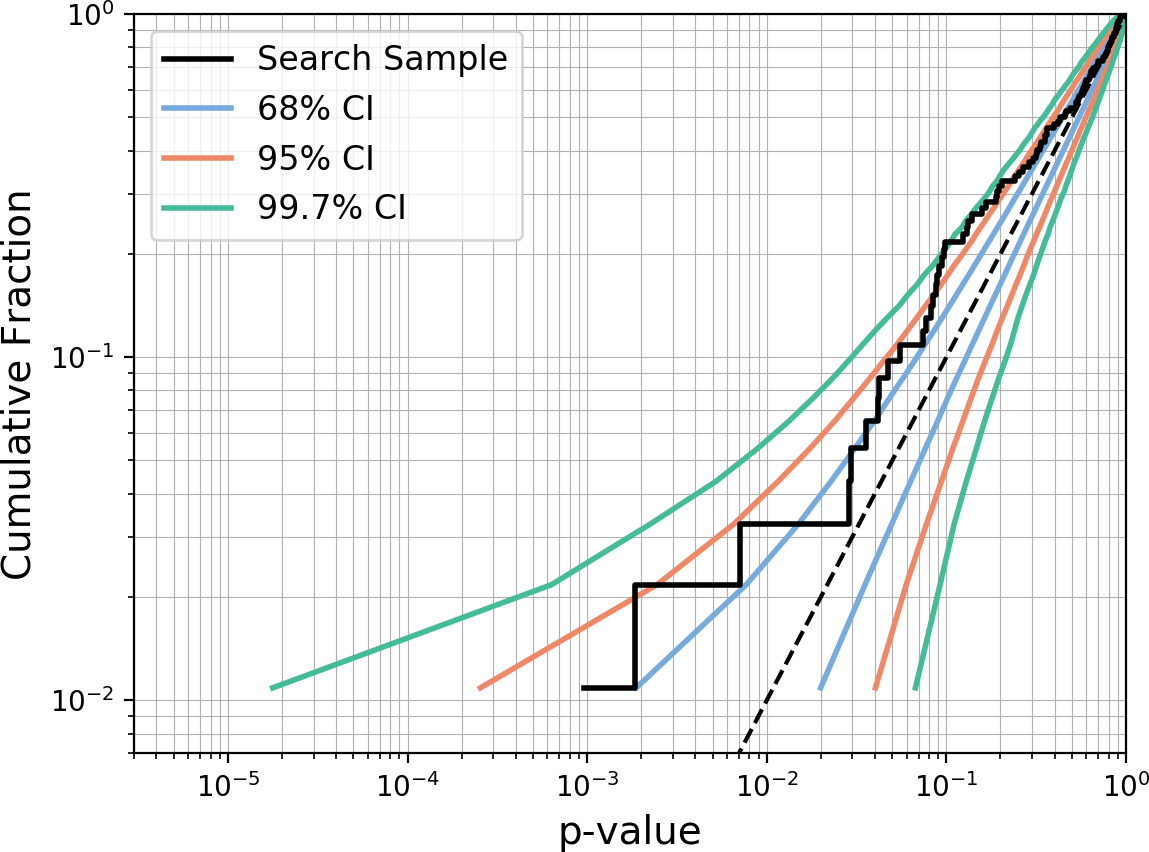 In this plot, we have removed GW170817 and GRB 170817 from our search and regenerated the results. We can now see that the staircase curve stays consistently within the region between the green lines. This indicates that the remaining gravitational-wave events do not appear to be associated with GRBs.