Binary black holes tell us how fast the universe is expanding

Dated 19 February 2021. Read this summary in PDF format (in English) and in other languages: Portuguese .

The universe we live in is expanding. This makes distant galaxies and other objects recede from us. The Hubble constant is one of the fundamental numbers describing the universe as we see it today. It tells us how fast the objects in the universe are receding from us and therefore how fast the universe is expanding. It is usually expressed in units of kilometers per second per Megaparsec. This means that for every unit of distance you move out into the cosmos the objects there are moving faster in proportion to that distance. It was in the 1920s that scientists like Alexander Friedmann, Georges LemaÃ®tre, and Edwin Hubble theorized and verified that local galaxies followed this trend and now ~100 years later astrophysicists have refined Hubble's original estimate to ~70 km/s/Mpc. Two of the traditional approaches of measuring the Hubble constant have however started to disagree, giving rise to a puzzle known as the Hubble tension. This is where newly-implemented gravitational-wave approaches to measure the expansion of the universe can help.

On the 17th August 2017 the LIGO-Virgo interferometers for the first time ever detected the gravitational-wave signal from a binary neutron star merger, GW170817. News of this detection was rapidly circulated to electromagnetic astronomers who were able to confidently identify the galaxy that the signal belonged to. This event then enabled a novel measurement of the Hubble constant first suggested in a 1986 paper by Bernard Schutz. The gravitational wave detection alone tells us how far away the signal is but the electromagnetic measurements of the host galaxy tell us how fast it's receding from us, otherwise referred to as the redshift of the galaxy. With these two pieces of information, from objects that are reasonably close to us like GW170817 at a mere 40 Megaparsecs, we are able to directly measure the Hubble constant. The uncertainty in the distance measurements are large, largely due to our lack of knowledge of how the binaries are oriented with respect to our view of the signal. We are able to constrain the Hubble constant to an accuracy of ~15% with GW170817. This measurement agrees with all current leading estimates (which is reassuring) but therefore does not yet challenge any of them. The powerful demonstration of GW170817 for gravitational wave cosmology was only the start. Potentially every single compact binary coalescence signal detected through gravitational waves can provide its own independent measurement of the Hubble constant. When combined, these measurements reduce our uncertainty because the dominating statistical noise can be averaged away.

Since the start of the advanced gravitational-wave detection era, the LIGO-Virgo Collaboration reported the detection of 10 binary black hole signals observed in the first and second observing runs (GWTC-1). The analysis of data from the first half of the third observing run has revealed 39 additional gravitational-wave detections (GWTC-2); many more preliminary candidate events are present in the data from the second half of the third observing run. In the paper presented here we show how all of the GWTC-1 binary black holes can be combined to improve our initial GW170817 Hubble constant estimate. The difficult and new part of this analysis is that for none of the other events do we have a (unique) electromagnetically identified host galaxy. In these cases we take our lead from Bernard Schutz's original paper and make use of the sky localisation information provided from each of the gravitational wave detections. When a compact binary coalescence is detected in multiple detectors, due to the relative times of arrival of the signal at each detector, it is possible to determine the location on the sky from where the signal originated. For the heavier systems, like binary black holes, the localisation uncertainty allows us to constrain the origin to an area ranging from a few tens to a few thousand square degrees (the full moon covers ~0.2 square degrees). We can then make use of existing galaxy catalogs to select those galaxies that could be possible hosts within the uncertainty region. For each possible galaxy redshift we can compute a Hubble constant and then essentially average over all the possible galaxies. This averaging broadens our ultimate uncertainty on the Hubble constant obtained from each gravitational wave event but it allows us to combine all the binary black hole events. When combining multiple measurements one starts to reduce the overall uncertainty which, with enough events, makes up for the problem of averaging over possible host galaxies.

One of the primary problems that was addressed in the analysis is that of selection effects. These are cases where the limitations of a measurement device affect the properties of the signal population that you measure. For both gravitational wave detectors and electromagnetic telescopes, signals that are too distant become too weak to detect. For gravitational wave detectors we are also more sensitive to higher mass systems with the exception that too heavy systems merge at frequencies too low for us to detect. On the other hand, galaxy catalogs obtained with conventional telescopes can naturally only include galaxies down to a certain limiting brightness. One of the key problems addressed in this analysis is how we can make an unbiased measurement if we know that there is a good chance that the host galaxy of a particular gravitational wave source is too faint to be included in our electromagnetic galaxy catalog. This is the case for nearly all of our binary black hole detections. The ultimate aim of gravitational wave cosmology is to make measurements of cosmological parameters with accuracies that match or exceed those made by electromagnetic observations alone. We must therefore carefully account for the potentially very subtle statistical selection effects that are present.

This latest analysis uses all 11 of the confidently detected compact binary coalescence events found with the LIGO-Virgo detectors during the first and second observing runs. All but one of these were binary black holes and required the use of the statistical approach to obtain Hubble constant estimates. The remaining event, the binary neutron star merger GW170817, stood out as the most informative of all the detections for the primary reason that it had an electromagnetic counterpart signal allowing us to measure the redshift of the single host galaxy. For this reason the Hubble constant estimate from GW170817 dominates the combined result. However, one of the binary black hole events, GW170814, discovered only 3 days before the binary neutron star, also makes a significant contribution to the final result. This event was one of the strongest binary black hole signals detected and also had a particularly small sky localisation region since it was detected using all 3 of the advanced detectors (LIGO Hanford, LIGO Livingston, and Virgo). This meant that the extra uncertainty from the many possible host galaxies was reduced (since a smaller area contains less galaxies). Plus, it also happened to be located on top of the same region of sky observed by the electromagnetic Dark Energy Survey. This survey was extremely sensitive and therefore includes very distant and very faint galaxies out to redshifts beyond that expected for this event. This consequently improves the quality of our redshift information for this source and results in a similarly improved estimate (compared with the other binary black holes) of the Hubble constant.

The final result of this new analysis improves on the Hubble constant measurement inferred from the binary neutron star merger GW170817, reducing our uncertainty by 4%. The estimate including all events from the first and second observing runs is that the Hubble constant H0 = 69+16-8 km/s/Mpc and is still consistent with measurements made with both cosmic microwave background and supernova observations. However it is clear that binary black holes, since they do not have identified electromagnetic counterparts, give us weaker cosmological information in comparison to binary neutron stars with a counterpart. However, it is clear from this analysis that all merger events, however informative, can be combined to improve the final measurement. With new detections coming in more and more frequently following each upgrade or expansion of the advanced gravitational-wave detector network, it is only a matter of time before gravitational-wave cosmological measurements become competitive with other existing approaches and start to provide valuable independent insight.

Figure 1 (Fig. 1 from the paper): Comparing the localization of GW events with the estimated completeness of two galaxy catalogs used in our analysis, this figure shows the probability that the event's host galaxy is included in the catalog, as a function of redshift. For the GLADE galaxy catalog, this probability is shown for each individual event, using the completeness estimated within each event's sky localization, and shown as black curves. For the DES-Y1 galaxy catalog only one curve (orange) is shown, valid for the patch of sky covering GW170814. Each curve is independent of the value of the Hubble constant H0. The vertical lines show the median redshift estimated for each event, assuming a cosmological model matching the 2015 results of the Planck microwave background probe. For illustration, these lines are drawn thick and solid up to where they intersect the curve for the galaxy catalog they are used with, and thin and dashed above. 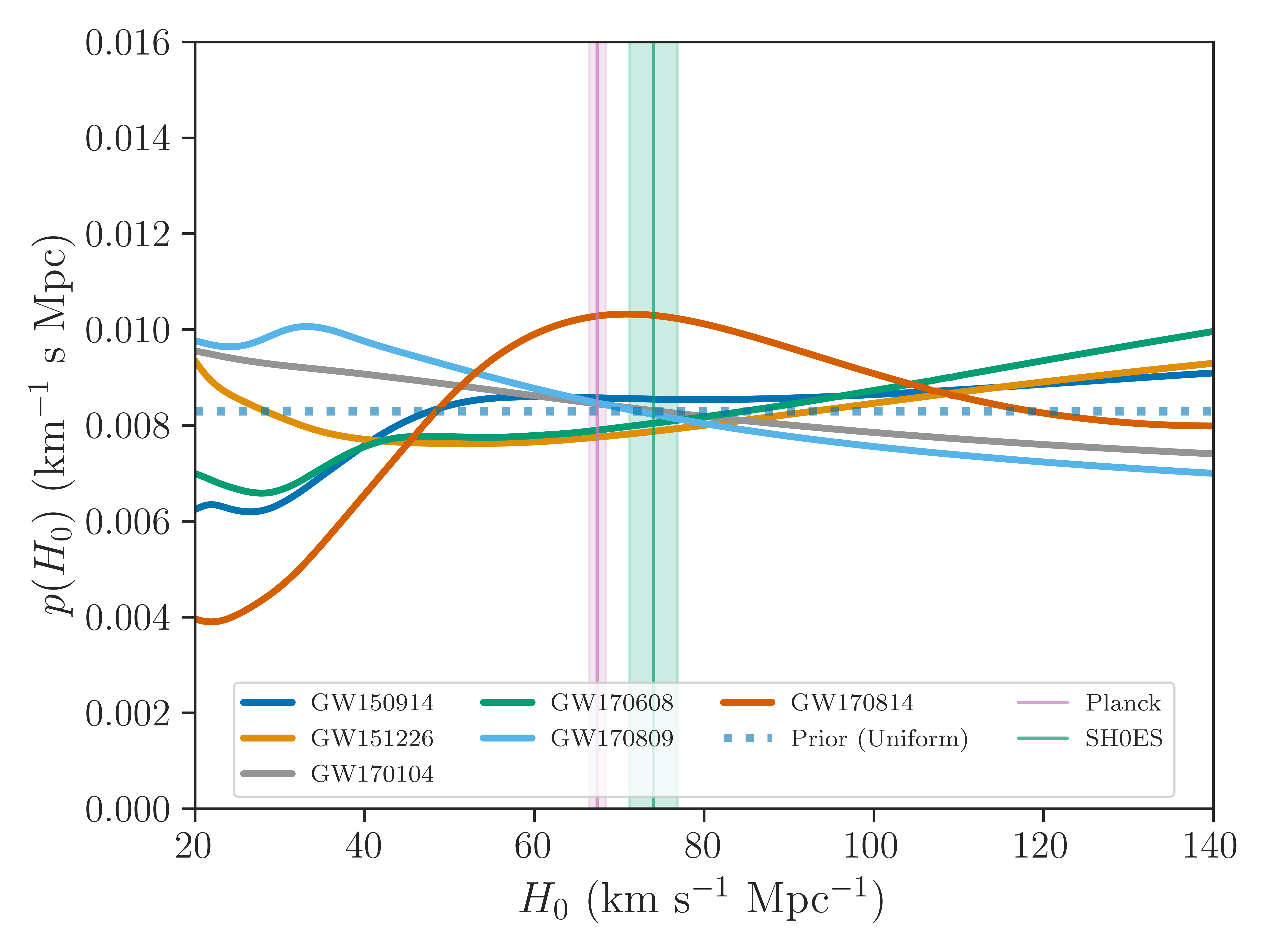 Figure 2 (Fig. 3 from the paper): Individual estimates of the Hubble constant H0 from the six loudest binary black hole detections as selected for this analysis. Results are shown as posterior probability distribution curves. The analysis started by assuming that H0 is limited to the interval [20, 140] km/s/Mpc and equally likely to take any value in this range (dotted blue horizontal line labelled "Prior (Uniform)") and made certain assumptions on the population properties of merging binary black holes in the universe; see the full scientific paper for more details. For comparison, we also show the independent estimates of H0 from two conventional, non-gravitational-wave measurements: The Planck cosmic microwave background probe (Aghanim et al. 2020) and supernova observations (SH0ES: Riess et al. 2019). The GW results from individual binary black hole events are relatively broad but consistent with those other results. 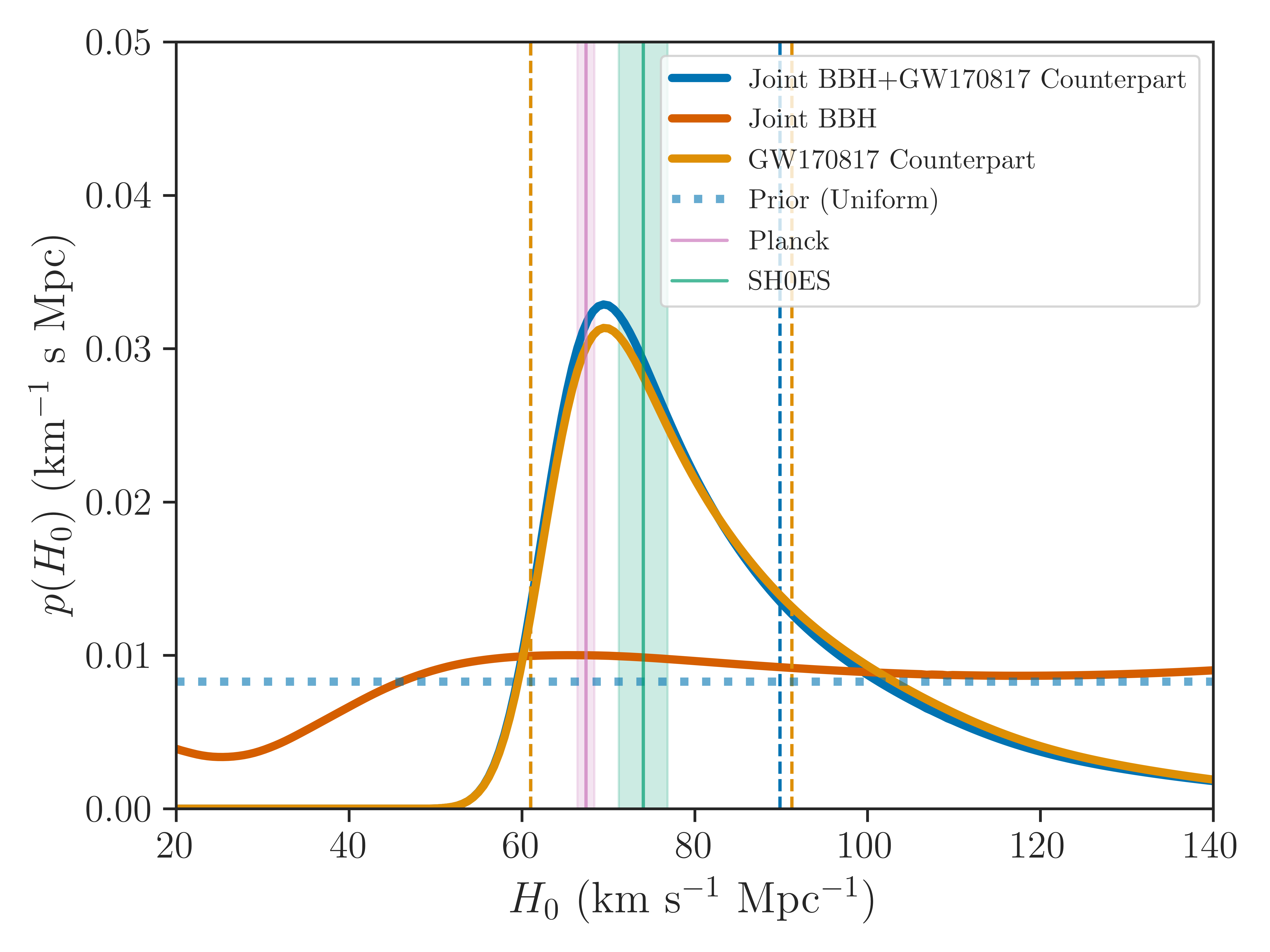 Figure 3 (Fig. 4 from the paper): The gravitational-wave measurement of H0 (dark blue) from the combined detections in the first two observing runs of Advanced LIGO and Virgo, again shown as posterior probability distribution curves. The estimate from the binary neutron star merger GW170817 (orange) comes from the identification of its host galaxy NGC4993 (see this science summary). The additional contribution to the slightly steeper blue curve comes from binary black holes in association with appropriate galaxy catalogs. For GW170814 we use the DES-Y1 galaxy catalog, while for the remaining five BBHs, GW150914, GW151226, GW170104, GW170608, and GW170809, we use the GLADE catalog. Intervals containing 68% of the posterior probability for each distribution are indicated with vertical dashed lines. All results again assume a prior on H0 uniform in the interval [20,140] km/s/Mpc (dotted blue horizontal line). We also show the same comparison results from Planck (Aghanim et al. 2020) and supernova observations (SH0ES: Riess et al. 2019) as in the previous figure.