Dated 08 March 2019. Read this summary in PDF format (in English) and in other languages: German .

We have now observed gravitational waves from some of the loudest events in the Universe. But what is happening with gravitational waves from the quieter events? Current rate estimates show that there is approximately one binary neutron star merger every 13 seconds and one binary black hole merger every 223 seconds. Unfortunately, most of these events are too faint to be individually detected. The combined effect of these distant, unresolvable mergers is known as the stochastic gravitational-wave background (SGWB) and could tell us a great deal about our cosmic history.

The superposition of gravitational waves which form the stochastic gravitational-wave background may originate from astrophysical sources like binary black holes (GW150914), supernovae, and binary neutron stars (GW170817), or they could come from cosmological sources such as cosmic strings. There may be more exotic sources that contribute to this stochastic background, though these contributions to the background are harder to model and may remain hidden until more advanced detectors begin taking data.

To better understand the stochastic background we can use the following analogy: Imagine looking at the headlights of cars at night. When the car is close, the headlights can be individually resolved. But at large distances, the headlights begin to blur together and form a single bright spot. Similarly, we expect distant binary black holes and binary neutron stars to merge, stars to explode as supernovae and all together these phenomenally energetic events blur together to create a "glow" of gravitational waves in the distance.

The search for the isotropic stochastic gravitational wave background during Advanced LIGO's second run (November 2016 - August 2017) did not reveal any evidence of the background. However, thanks to the increase in sensitivity of the detector due to hardware and software upgrades, new upper limits were placed on the energy density of the background. This showed an increase in sensitivity by a factor of about 3 relative to the first observing run with Advanced LIGO. In addition to the improved upper limits on the stochastic background, we were also able to place new limits on the string tension of Nambu-Goto cosmic strings and to test the polarization content in the SGWB. Since General Relativity (GR) says that gravitational waves should have one specific type of polarization mode (called tensor modes), we can test the data to find the 'likelihood' that Nature also produces vector and scalar modes of gravitational wave signals. The presence of these other modes would suggest physics beyond GR. Although we cannot test Einstein's theory directly until the SGWB has been detected, we can place constraints on the presence of a background with any kind of polarization modes. The current results are consistent with predictions from General Relativity.

A unique challenge on the horizon for the search for the stochastic background comes from magnetic noise contamination due to Schumann resonances. Between the surface of the Earth and up into the ionosphere, resonating electromagnetic waves which span very large distances are generated. This leads to sustained noise that is common between the two detectors. Numerous magnetometers are set up at each interferometer, and these constantly monitor the magnetic field around the detector sites. This noise contribution was too small to be an issue for this observation. However for future observations made with optimized sensitivity, magnetic noise may begin to limit the sensitivity of the detectors to a stochastic gravitational-wave background so it needs to be carefully handled.

If you are interested in learning more, take a look at the first isotropic stochastic search. As Advanced LIGO ramps up for its third observing run, we expect to observe more events than ever thanks to upgrades leading to improved sensitivities.

For more information on how these figures were generated and their meaning, see the free preprint of our publication. 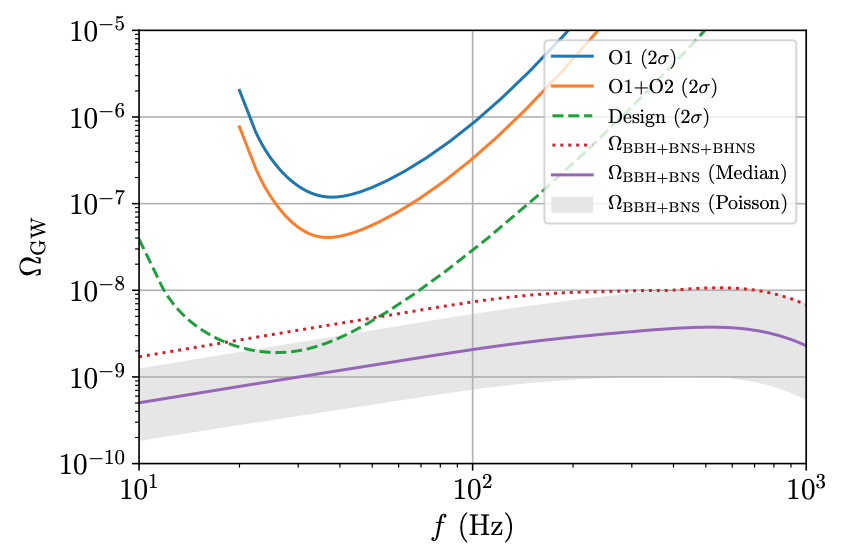 Chances of seeing a stochastic gravitational-wave background during various observing runs. The purple line is the median total stochastic background combining binary black hole (BBH) and binary neutron star (BNS) events, and the gray box is the Poisson uncertainty region. The dotted red line is the sum of the upper limit for the BBH+BNS backgrounds with the upper limit on the BHNS background. In order to make a detection, the detector sensitivity (blue, orange and green curves) would have to dip below the predictions in order to have the possibility of detecting the SGWB. 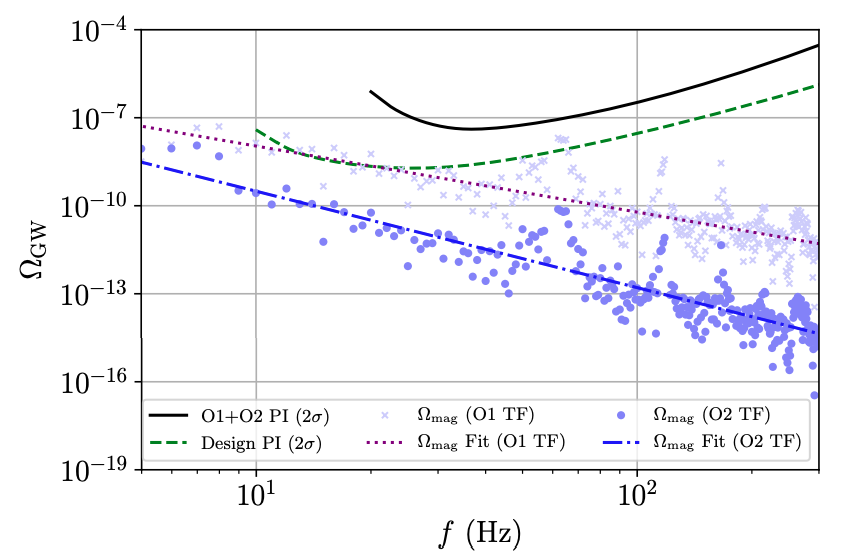 Likelihood that measurements of the stochastic gravitational-wave background will be contaminated by magnetic noise. The two trend lines show power law fits to the magnetometer spectra, scaled by the O1 (purple dotted) and end-of-O2 (blue dot-dashed) transfer functions. This demonstrates the effect of reducing the magnetic coupling in O2. The trend for the noise budget lies well below the solid black O2 PI curve, which indicates that correlated magnetic noise is negligible in O2. However magnetic contamination may be an issue in future observing runs.