Checking in on Old Friends: Cassiopeia A and Vela Jr.

Gravitational wave scientists have several favorite potential sources of continuous signals and often revisit them when probing new data sets. Those favorites include familiar pulsars like the Crab and Vela, objects for which the rotational frequencies and how those evolve are known well because they are monitored by electromagnetic astronomers. However, there are a handful of lesser-known but intriguing sources about which little is known. Particularly prominent are the two neutron stars near the centers of the supernova remnants known as Cassiopeia A (Cas A) and Vela Jr.

These so-called central compact objects (CCOs) are stars created in the aftermaths of supernova explosions, some 300 years ago for Cas A and perhaps 700 years ago for Vela Jr. No electromagnetic pulses have yet been detected from these stars, but their relative youth makes it likely that both are spinning rapidly (at frequencies of tens of Hz and perhaps much higher) and that they possess residual crustal distortions from their violent births. Such distortions are essential to producing continuous gravitational wave emission. Moreover, the X-ray glow from these stars tells us precisely where to look for them.

In searching for the corresponding gravitational wave signals, one must scan over a wide range of possible frequencies and spin-down frequency change rates (“derivatives”). In our most recent search for signals from these two “old friends” over a frequency range from 20 to 976 Hz, we used a technique known as Weave that adds together potential signals from many 5-day (Cas A) and 7.5-day (Vela Jr) segments from the first half of the O3 observing run. When using such long segments of data we must also search over possible values of the second frequency derivative (i.e. the rate of change of the rate of change in frequency!).

This last scan makes the search computationally demanding, but also allows us to search more deeply in the LIGO detector noise for a gravitational wave signal. The results from the most recent search are, to date, the most sensitive for continuous gravitational waves from these sources, surpassing our own past searches and those of other researchers, as seen in Figure 2.

Although no discovery was made, we plan to continue checking in on these old friends using data from future observing runs, with the hope that the ever-improving detector sensitivities will someday allow us to finally uncover the nature of these unusual and reclusive stellar characters. 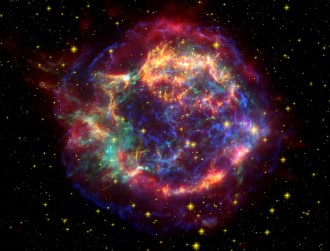 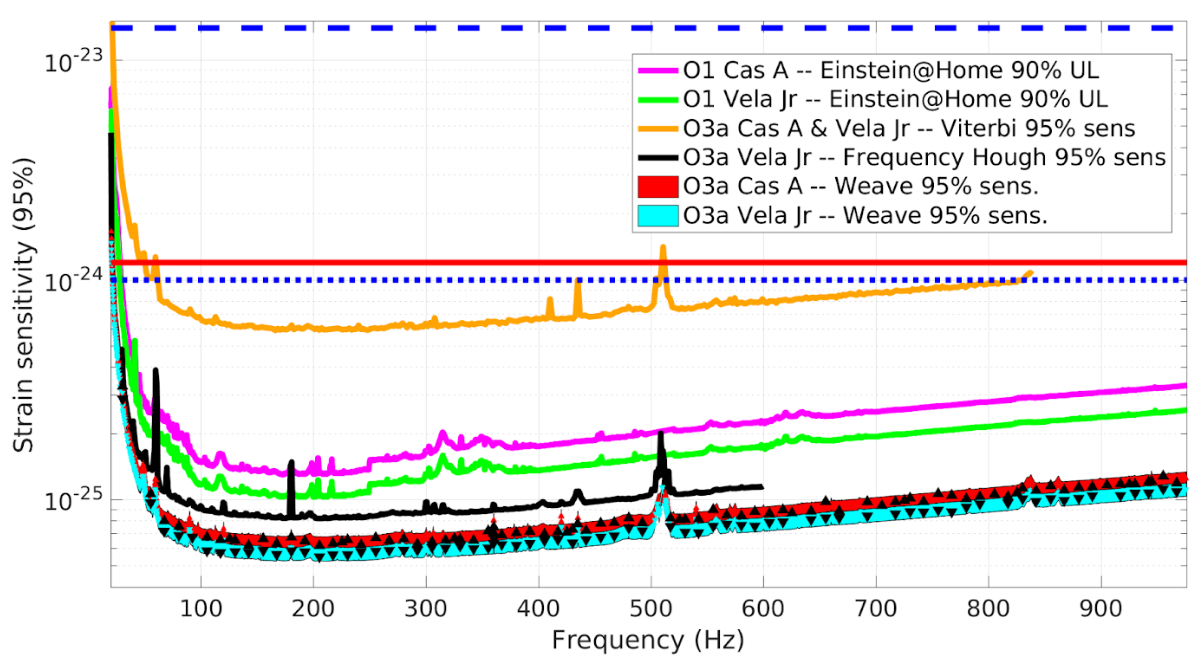 Figure 2: Estimated gravitational wave strain amplitude sensitivities (95% efficiency) in each 0.1-Hz sub-band for the Cas A (red band) and Vela Jr. (blue band) searches. Uncertainty bands of Â±7% are indicated. Corresponding, larger black triangles denote 0.1-Hz bands for which rigorous upper limits are used to determine the estimated sensitivity vs frequency. Additional results from prior searches for Cas A and Vela Jr. are also shown. The horizontal lines indicate theoretical upper bounds on the allowed signal strains of the stars under the assumption that gravitational wave emission has dominated energy loss since each starâs birth. Two blue lines are shown for Vela Jr under different assumptions for the true age of the star. (Click on the figure for a larger version.)