Dated 12 April 2022. Read this summary in PDF format (in English) and in other languages: Catalan .

According to astronomical observations, the region near the centre of the Milky Way, our Galaxy, is a very active and densely populated place. In particular, space telescopes like Fermi-LAT have measured an excess of energy, in the form of high-energy electromagnetic radiation, coming from that particular region of the sky. This excess suggests that the region surrounding the Galactic centre may host a large population of neutron stars, along with the well known supermassive black hole Sagittarius A* (Sgr A*, see Fig. 1). As typically happens in science, there are also other hypotheses for the cause of this electromagnetic excess. Indeed, another possible explanation is the presence of dark matter colliding with itself to produce an overabundance of radiation.

A similar quasi-monochromatic signal is expected to be emitted by a spinning black hole surrounded by a cloud of ultra-light bosons which are a hypothetical dark matter candidate. This cloud can form around a spinning black hole thanks to a physical effect called superradiance. Once the boson cloud is formed, it will start to dissipate, emitting gravitational waves at a frequency proportional to the mass of the bosons forming the cloud. This evaporation occurs quite slowly, so the gravitational wave signals can last in some cases more than 100,000 years before the cloud is completely dissipated.

Using data from the latest observing run of the LIGO and Virgo interferometers, we look for these continuous signals coming from the inner parsecs of the galactic centre. Given that we do not know the frequencies emitted by either the neutron stars or the black hole/boson cloud systems, we investigate a wide range of frequencies. Specifically, we consider frequencies between 10 and 2000 Hertz, in the most sensitive band of the detectors. Furthermore, we also consider the possibility that this frequency may vary on a long time scale. For neutron stars, the frequency typically decreases (spin-down) due to the loss of energy via electromagnetic or gravitational waves, although a small increase (i.e., spin-up) is also possible like for the case of a spinning neutron star accreting matter from a companion. For the black hole/boson cloud systems we instead only expect a small increase in frequency as a consequence of the cloud annihilation. We also consider a small random frequency wandering in our signal model to be more robust to possible deviations from the theory describing the boson cloud gravitational wave emission scenario. Black hole/boson cloud systems composed of bosons with masses between ~10-14 to 10-12 eV/c2 (corresponding to ~10-48 to 10-46 kg) emit gravitational waves in this frequency range.

We did not detect any significant signal during this search, meaning that we are able to exclude the presence of neutron stars emitting gravitational waves with amplitudes above a certain value from the direction of the Galactic centre. These limits mean that we have been able to constrain the non-axisymmetric ellipticity of rotating neutron stars at the Galactic centre to be as low as 10-6 â 10-7 at the highest frequency (see Fig. 2). Hence we are starting to probe theoretical upper bounds on the maximum possible ellipticity expected for neutron stars composed of normal matter. We can also use these limits to probe an alternative emission scenario from a spinning neutron star, here not due to a static deformation, but produced rather by a particular type of oscillations happening in the star, called r-modes. Here we are able to exclude the standard theoretical maximum r-mode saturation amplitude of ~10-4 for spin frequencies above ~450 Hz.

Since we found no evidence of gravitational waves, we can also exclude various combinations of the boson mass/black hole mass, assuming a given spin for the black hole and age for the boson cloud. We are able to exclude signals from systems with a black hole mass between 15-100 times the mass of the Sun and boson masses between 10-13 to 10-12 eV/c2 (see Fig. 3) 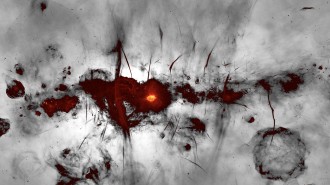 Figure 1: MeerKAT telescope image of the centre of our Galaxy showing radio emission from the region. The brightest central point is the location of the supermassive black hole Sgr A*. See here for information about the many other objects in this image. The image covers a region of ~2 degrees horizontally, which is equivalent to ~140 parsecs on either side of Sgr A* assuming a distance from the Earth of 8000 parsecs. We have searched a region centred on the sky position of Sgr A* with a radius of 300 parsecs for the lowest frequency in our range, reducing to 30 parsecs for the highest frequency we consider. Credit: I. Heywood, SARAO 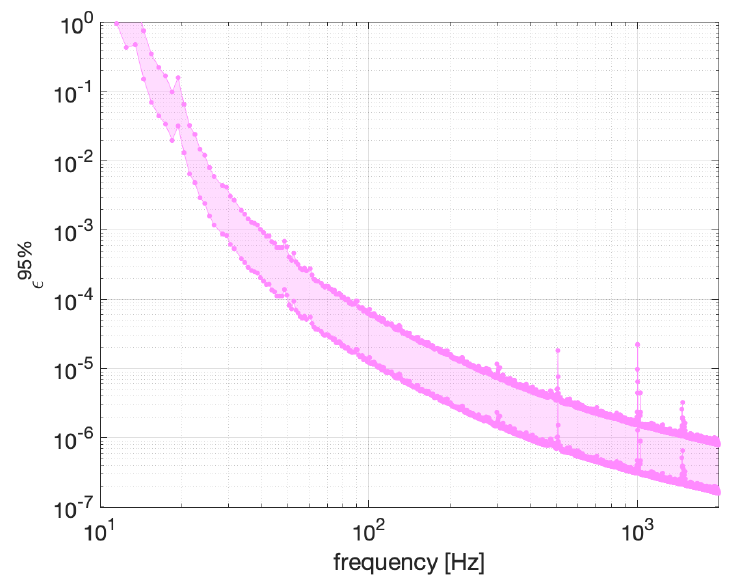 Figure 2: Ellipticity upper limits assuming a Galactic centre distance of 8000 parsecs, as a function of the frequency in units of Hertz. The shaded area between the two curves covers the range of values of possible neutron star moments of inertia: one for the fiducial value for a neutron star composed of normal matter (upper curve) and another for neutron stars with more exotic components (lower curve). 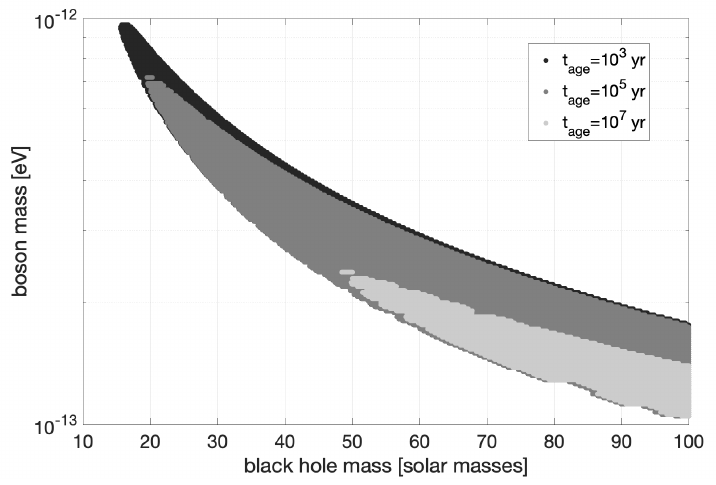 Figure 3: Constraints in the black hole mass – boson mass plane. We assume black holes with boson clouds located at the Galactic centre (at a distance of 8000 parsecs) with a black hole spin of half the theoretical maximum. Clouds with different ages have been considered. Since younger clouds emit stronger gravitational waves, we can constrain a wider parameter space in this case. Shaded areas, for each boson cloud age, represent the combinations of black hole mass and boson mass that we now know are not present at the Galactic centre.