Dated 03 March 2022. Read this summary in PDF format (in English) and in other languages: Chinese (simplified) | German | Italian | Japanese | Spanish .

In April 2020, GEO and KAGRA made joint observations for two weeks. We call this GEO--KAGRA joint observing run O3GK. The results are reported in a scientific paper. Due to the weak sensitivity of both detectors, no confident GW detection is reported. However, during the two weeks, several gamma-ray bursts (GRBs) were observed by astronomers and the LIGO-Virgo-KAGRA (LVK) collaboration made a series of associated GW searches: all-sky searches for binary neutron star (BNS) coalescences and generic unmodelled bursts, as well as targeted searches for compact binary coalescences (CBCs) and unmodelled bursts associated with the GRBs reported during the run (GRB-targeted searches).

No GW signals were identified from the resulting data, as expected given the sensitivity of the detectors. However, these analyses demonstrate that the analysis efforts are ready to incorporate KAGRA data, which will be increasingly important as KAGRA nears its design sensitivity.

The O3GK run was KAGRA's first joint observation with another GW detector. KAGRA is a laser interferometric GW detector with 3 kilometer arms, located in Kamioka, Gifu, Japan. KAGRA is built underground in a mine, and uses cryogenic mirrors for four test masses, which reduces seismic and thermal noise. By April 2019, most of the interferometer components had been installed, and the commissioning (tuning the detectors to make them more sensitive) work started. After commissioning, the sensitivity of KAGRA was improved to reach a BNS observable range of approximately 1 megaparsec (3.26 million light years) by the end of March 2020. Since KAGRA is a new detector that is still undergoing improvements, it is not yet at its design sensitivity.

GEO is one of the oldest GW detectors of interferometric design and, while being a smaller detector with 600 meter arms, plays an important role as a testbed of new detector technologies. The sensitivity of GW detectors is limited by the noise produced by the instruments. On top of a noise floor, which is essentially the same over time, there are short duration instrumental artifacts in the data, which we call glitches. While a lot of effort is put into making the noise as low as possible and as glitch-free as possible, the glitches can mimic short duration GW signals. By running two detectors concurrently, we significantly reduce the number of glitches that can be mistaken for real signals.

Figure 1 shows the typical sensitivity of the two detectors during the joint observing period. Lower strain means more sensitivity. At lower frequencies KAGRA is more sensitive while at higher frequencies GEO is more sensitive. During the observing run, KAGRA could detect BNS inspirals up to a distance of approximately 0.8 megaparsecs (2.6 million light years) and GEO could do so up to a distance of about 1.1 megaparsecs (3.6 million light years).

The LVK collaboration performed all-sky binary and burst searches. The all-sky binary search is a matched-filter search which compares the data with a set of template waveforms based on theoretical models of the GWs emitted from CBCs. The all-sky burst search is a search for unmodeled GW transient signals. The results of the two all-sky searches conclude that no GW signals have been detected. A plot of the result is shown in figure 3.

During the observing run, there were a few interesting astronomical events, GRBs, which could potentially have accompanied GWs. Data was searched more carefully around these events. Four GRBs, consisting of two long GRBs (of duration greater than two seconds) and two short GRBs (of duration is less than two seconds), were detected coinciding with science data taking in both KAGRA and GEO. The LVK collaboration performed GRB-targeted binary and burst searches, which search the time-band and sky-location limited by electro-magnetic observations of the GRBs. The LVK collaboration concludes that there is no evidence for GW emission associated with any of four GRBs analyzed by both GRB-targeted binary and burst searches.

One of the analyzed GRBs, GRB 200415A, has been associated with a giant flare of a magnetar in the Sculptor galaxy (NGC 253) at 3.5 megaparsecs. The result for the GRB-targeted binary search for GRB 200415A is shown in figure 4. The exclusion distance based on our analysis is only a few kiloparsecs and this is not enough to exclude a CBC progenitor and test the magnetar giant flare hypothesis. The result for the GRB-targeted generic burst search is shown in figure 5. For each GRB, an exclusion distance is calculated.

Through the analyses presented here, the LVK collaboration has demonstrated the promise of KAGRA becoming a part of the GW detector network. The LVK detectors are now offline for improvements before the upcoming fourth observing run (O4), currently planned to start in mid-December 2022 (see here).

Once KAGRA is operational at its design configuration, it will achieve a sensitivity that is comparable with the Advanced LIGO and Advanced Virgo detectors; KAGRA will then play an essential role in detecting GW signals. It is vital to have more detectors become part of the network in terms of recovering more information and improving our ability to pinpoint source locations. The fact that KAGRA's arms are oriented very differently from the other detectors makes its contribution even more important. 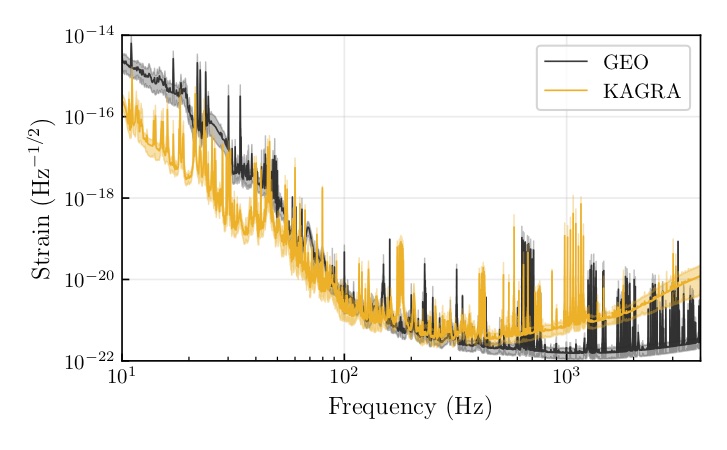 Figure 1: (The left panel of Fig. 1 from our publication.) Plot showing the typical sensitivity of KAGRA (yellow) and GEO (black) during the joint observing period. The vertical axis gives the average strain noise in the detectors, which is a measure of how much the mirrors typically move as a function of frequency (horizontal axis). The solid curves show the mean sensitivity for each frequency bin and the shaded regions show the 5th and 95th percentile over the period. 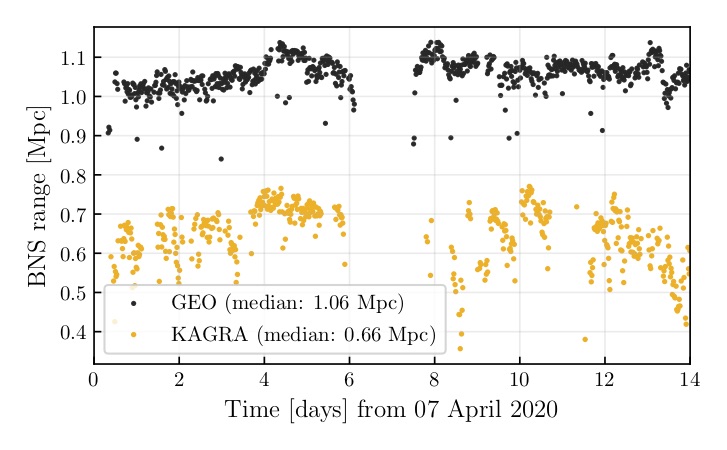 Figure 2: (The right panel of Fig. 1 from our publication.) The BNS observable ranges for KAGRA (yellow) and GEO (black) during the joint observing run. The evolution of ranges during the observing run is shown. The gap around day 6 and 7 was caused when both detectors were affected by bad weather and were unable to lock. The median range values are 0.66 megaparsecs for KAGRA and 1.06 megaparsecs for GEO. 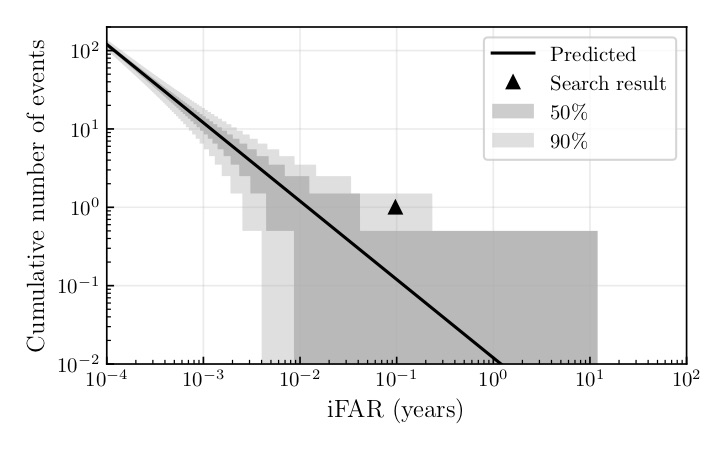 Figure 3: (Fig. 5 from our publication.) Cumulative number of events as a function of the inverse of false-alarm-rate (iFAR) found by the all-sky generic burst search. Only a single event is identified (triangle), which is the loudest event. It is within the 90% interval meaning that it is considered to be due to noise. The shaded regions show the 50% and 90% Poisson uncertainties. 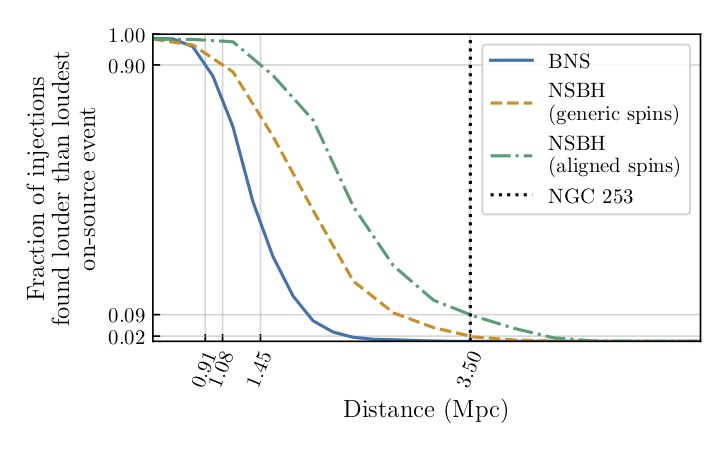 Figure 4: (Fig. 7 from our publication.) Exclusion distances for GRB 200415A analyzed by the GRB-targeted binary search for a BNS and neutron star and black hole (NSBH) signals. The curves correspond to the three simulated populations: BNSs (blue solid), NSBHs with generically oriented spins (orange dashed), and NSBHs whose spins are aligned with the orbital angular momentum (green dot-dashed). The 90% exclusion distances of 0.91 megaparsecs, 1.08 megaparsecs, and 1.45 megaparsecs are marked by the vertical lines, and the distance to NGC 253 (3.5 megaparsecs) is also shown. The confidence levels corresponding to the distance to NGC 253 for BNS, NSBH (generic spins), and NSBH (aligned spins) are marked by the horizontal lines: 0%, 2%, and 9%, respectively. Thus the search sensitivity is not sufficient to exclude CBCs. 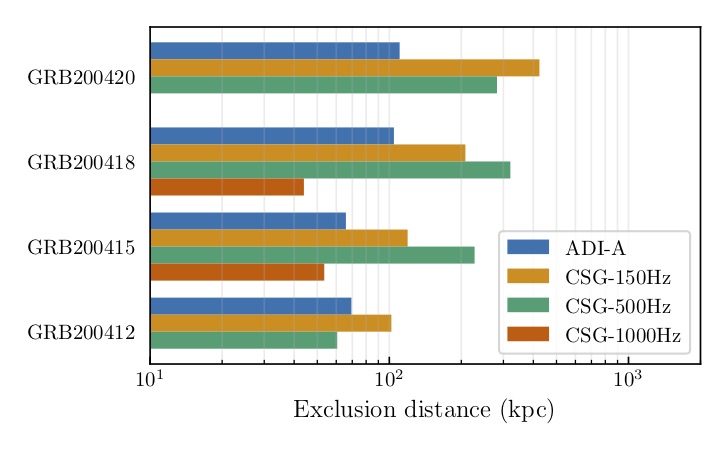 Figure 5: (Fig. 8 from our publication) Exclusion distance for each of the four GRBs analyzed by the GRB-targeted generic burst search. Here, each color corresponds to a different assumed GW signal model; the four models considered are known as the accretion disk instability (ADI) signal model A and circular sine-Gaussian (CSG) signals with the central frequencies of 150 Hz, 500 Hz, and 1000 Hz.