Dated 31 May 2021. Read this summary in PDF format (in English) and in other languages: Chinese (traditional) | Italian | Japanese .

The search for intermediate-mass black holes (IMBHs) has been a focus of astronomers' attention for many years. The Advanced LIGO and Advanced Virgo detectors completed their first two observing runs (O1 and O2) between 2015 and 2017, and no significant detections of IMBH mergers were made. The first half of our third observing run (O3) marked the first confirmed detection of an IMBH remnant in a binary system: GW190521, a discovery which we announced in 2020. In pursuit of finding more such sources, we present here a dedicated IMBH search of the data from O3. In this new search we again found GW190521, but with higher significance. We also found some other possible IMBH candidates, but none qualify as significant. However, the results of our search have improved our understanding of the astrophysical merger rates of IMBH binaries.

IMBHs: The Mysterious Bridge Between Stellar-Mass And Supermassive Black Holes

In our Universe, black holes (BHs) are broadly divided into three categories based on their masses. These are stellar-mass BHs, supermassive black holes (SMBHs), and IMBHs. The lightest among the three are stellar-mass BHs. These have masses up to 100 times that of the Sun (Mâ) and are formed by the explosion of a dying star of mass above 20 Mâ. To this date, the advanced LIGO-Virgo detectors have observed ~50 gravitational waves (GW) signals from coalescing compact binaries, published in the catalogs GWTC-1 and GWTC-2.

SMBHs, on the other hand, have masses above ~100,000 Mâ. Several theories suggest that these BHs form as a result of multiple collisions of massive BHs or IMBHs. In dense environments, the end products of first-generation mergers of compact objects can undergo further collisions to form massive second-generation BHs. This process could extend to further generations, eventually leading to what is referred to as a hierarchical merger scenario. So far, observations in the electromagnetic (EM) spectrum have shown that SMBHs reside at the center of most galaxies in the Universe. Although there have been shreds of evidence of SMBH mergers from EM observations, no observations are expected in the LIGO-Virgo frequency band â although the future space-based mission, LISA, has excellent prospects to detect these SMBH mergers to very great cosmic distances.

As their name suggests, the third category, IMBHs, lies in between stellar-mass BHs and SMBHs. Their masses range from ~100 to 100,000 Mâ. Some theories suggest that these BHs are the remnants of the direct core-collapse of massive first-generation, low-metallicity Population III stars, and others suggest that they are formed in the hierarchical mergers of stars in dense young star clusters. Either way, their very existence remains a puzzle until one makes a direct observation. At present, HLX-1 is the strongest IMBH candidate seen in the X-ray part of the EM spectrum, with an inferred mass of ~3000 to 300,000 Mâ. IMBHs can be directly observed in the GW window with Advanced LIGO and Virgo, however, by detecting the GWs emitted from a binary merger involving an IMBH â either as a binary component or as the merger remnant.

Why Is An IMBH Search Important?

IMBH systems serve as a perfect laboratory to test the theory of general relativity (GR). Some of these binaries could have highly unequal, or asymmetric, masses. In general, such asymmetric binaries with can produce GW higher harmonics along with their fundamental tone, just like what we see in musical instruments. These higher harmonics are also referred to as higher-order modes. One of our recent LIGO-Virgo detections, GW190412, showed the existence of these higher-order modes: this was the first time that scientists had detected a perfect fifth in the symphony of merging BHs. Detecting such asymmetric binaries can widen our understanding of the fundamental properties of BHs such as their mass, spin, and charge — as described by the no-hair theorem. Another advantage of studying IMBH binaries is that the results can inform us about the stellar evolution of massive stars. Can these studies also provide insight into the evolutionary link between stellar-mass BHs and SMBHs? Well, the LIGO and Virgo detectors are insensitive to GWs from the even heavier SMBHs, so to obtain a more complete picture we may have to wait for LISA observations of SMBH mergers.

How Do We Search For IMBH Binaries?

GWs produced from the coalescences of compact binaries like neutron stars or BHs stretch and squeeze the space-time around interferometric detectors. The deformations created by this stretching and squeezing are precisely measured by the LIGO and Virgo detectors via laser interferometry. The detectors not only capture GW signals but also see many types of noise coming from terrestrial and instrumental sources — including some which can be much “louder” than the GW signals themselves. To find astrophysical GW signals embedded in these noisy data, scientists use special techniques such as “matched filtering”, which uses the GW signal model predicted from GR to look for similar patterns in the data. Another model-independent technique searches for excess power across the detectors occurring within the light travel time between them — meaning that this excess could plausibly be coming from a GW signal.

A generic GW signal model is represented by its inspiral, merger, and ringdown phases (see Figure 1), the durations of which depend on the properties of the GW source. The heavier the binary, the shorter the GW signal emitted from it. Extracting such short signals from noisy data is indeed challenging, and the difficulty level can increase further due to terrestrial or instrumental artifacts camouflaging the actual signal. Therefore, it becomes imperative to carefully tune our search techniques so that they can best identify only real GW signals.

In the O3 observing run, a combination of model-based matched filtering and an unmodeled search was used to look for IMBH binaries. The combination of the two methods results in a list of plausible IMBH binary candidates that are found in more than one detector. Among these candidates, we select the ones that have a remnant mass above 100 Mâ and the primary mass (i.e. the mass of the heavier BH in the binary) above 65 Mâ, which is the lower bound of the pair-instability mass gap. We also require that our selected candidates have low values of false alarm rate (FAR), which means that the odds are small of finding a candidate with similar loudness that is simply background noise.

What Did We Find?

Based on our search selection criteria, we find GW190521 to be the most significant IMBH candidate in the combined search. The discovery of GW190521 was announced on September 2, 2020, and the signal properties were studied in a dedicated publication. The event originated from a merger of two BHs weighing 66 Mâ and 85 Mâ, leaving behind a remnant BH of mass ~142 Mâ. In this search, we detect this event with higher significance than the previous analysis.

The IMBH search being sensitive to high-mass binaries makes it optimal for recovering heavy binary black hole (BBH) systems. With this search, we also recover GW signals from other heavy BBH sources seen in GWTC-2. However, there were no new significant IMBH signals observed in this search.

What Can We Say About The Merger Rate Of IMBH Binaries?

Estimating how often IMBH binaries merge in a given volume of the Universe and a given time (their so-called “merger rate density”) requires us to understand how sensitive our search is — i.e. how likely we are to detect signals from IMBH binaries. To investigate this, we perform simulations that involve “injecting” artificial GW signals into the data. First we use Numerical Relativity models that generate GW signals by numerically solving Einstein equations for coalescing IMBH binaries with total masses up to 800 Mâ and mass ratios (denoted by the parameter q) varying between 1-to-1 and 1-to-10. We then distribute these signals uniformly in terms of their sky location, binary orientation, and comoving volume — and use our combined search to try to recover them from the data. The recovered signals in a given volume and observational time provides us with a measure of the sensitivity of our search (see Figure 2) and places bounds on the merger rates of IMBH binary sources, as shown in Figure 3.

From our studies, we found that the merger rate for equal-mass IMBH binaries with a total mass of 200 Mâ and spins of 0.8 is 0.06 per gigaparsec cubed per year. This upper limit is 3.5 times lower than the value reported in the previous IMBH search from the O1 and O2 observing runs. This rate translates into 0.2 mergers over the typical lifetime of a globular cluster (assumed to be 10 billion years). We also revise the merger rate for GW190521-like sources to 0.08 per gigaparsec cubed per year. 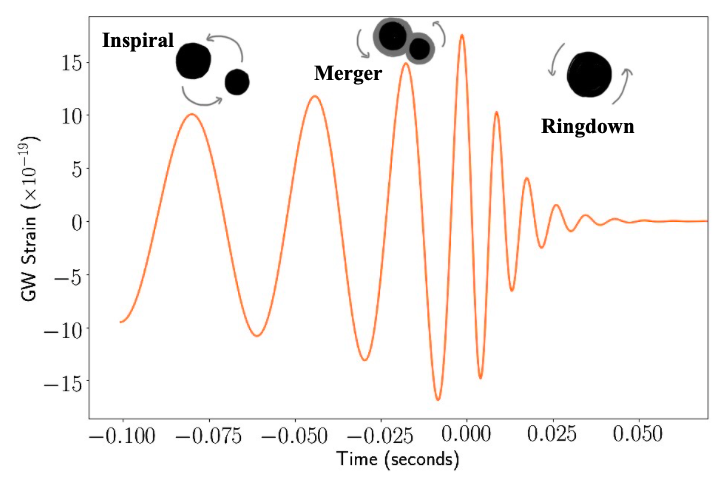 Figure 1: A pictorial representation of the three phases of a GW signal from a massive black hole binary. The quantity on the vertical axis represents the dimensionless GW strain (deformation of space-time) and the horizontal axis shows the duration of the signal.

For more information on these figures and how they were produced, read the freely available preprint. Click on the images for larger versions.

Figure 2: (Figure 1 from the paper) The averaged sensitive volume-time ãVTãsen, in Gpc3 yr (gigaparsec cubed year) for the targeted non-precessing (left panel) and precessing (right panel) IMBH binaries. Each circle corresponds to one class of IMBH binary with the given masses. For the non-precessing class of IMBH binaries, the sensitive reach of our IMBH search decreases with increasing total mass (M) of the binary system for a constant mass ratio (q). In the case of precessing binaries, indicated by non-zero values of ðp, the search sensitivity is directly correlated with how positive is the total effective spin of the system.

Figure 3: (Figure 2 from the paper) The 90% upper limit on the merger rate density (R90%) in Gpc-3 yr-1 (per gigaparsec cubed and per year) for the targeted non-precessing (left panel) and precessing (right panel) IMBH binaries. Again each circle corresponds to one class of IMBH binary with the given masses.