PSR J0537-6910, also known as “The Big Glitcher”, is a very special pulsar, which draws lots of attention from astronomers. Pulsars are rapidly-rotating neutron stars, which are the collapsed cores of massive stars. These objects are extreme in many ways. Not only do they harbour some of the strongest magnetic fields known in nature (more than a billion times stronger than the Earthâs magnetic field), but they are also among the most compact objects in the Universe. They pack more than the mass of the Sun into a space the size of a large city, and their interior densities exceed those of an atomic nucleus.

The name “pulsar” derives from the fact that we observe these objects by recording pulses of electromagnetic radiation. These pulses are due to the fact that electromagnetic waves are continuously streaming out from the magnetic poles of the neutron star. When the magnetic axis is not aligned with the rotation axis, the radiation beam sweeps around, like a lighthouse, and a pulse reaches us when the beam intersects with the Earth, as illustrated in Figure 1.

By carefully timing the pulses that arrive from the star, we can measure the starâs rotation rate and how this rate varies with time. The time evolution of the rotation rate can then be compared to theoretical models to understand which is the main physical mechanism that is carrying away the rotational energy of the pulsar and slowing it down. In particular, astronomers quantify this in terms of a parameter known as the braking index. If electromagnetic waves provide the main spin-down mechanism, we expect to measure a braking index of around 3, while higher values are expected if the emission of gravitational waves is causing the star to spin down.

PSR J0537-6910 is a young pulsar spinning at 62 Hz (i.e. 62 times per second) and located in the Large Magellanic Cloud. This pulsar is observed to be spinning down rapidly and also frequently experiences a so-called “pulsar glitch”, i.e. a sudden increase of its rotation rate (hence the pulsarâs informal nickname “The Big Glitcher”). Unlike most other pulsars, PSR J0537-6910 is not observed with radio waves, but rather it is observed via X-rays. As X-rays do not penetrate the Earthâs atmosphere, it is necessary to go to space for this kind of observation, and PSR J0537-6910 was first discovered using an X-ray telescope satellite called the Rossi X-ray Timing Explorer (RXTE), which was operational between 1996 and 2012. In 2017, an X-ray telescope called the Neutron star Interior Composition Explorer (NICER) was installed on the International Space Station, and this instrument is being used to observe PSR J0537-6910.

Observations throughout the years revealed the intense glitching activity of the pulsar and also allowed measurements of the braking index between the glitches. In particular, both RXTE and NICER observations suggest that far from the glitches the braking index is approximately 7, which is quite an unusual value for a pulsar, and what is expected if the star is being spun down mainly by gravitational waves due to r-mode oscillations. An r-mode is a kind of fluid wave that exists in rotating stars and is due to the Coriolis force, much like Rossby waves on Earth, and can generate gravitational waves. In fact, some theories suggest that gravitational-wave emission due to r-modes is active in all young pulsars, spinning them down from the rapid rotation rate they have at birth to the current slower rate observed in the standard pulsar population. The measurement of a braking index of 7 thus suggests that PSR J0537-6910 may still be at the end of its r-mode driven spin evolution, although other effects, such as for example a decaying magnetic field, could be responsible for this.

In order to test this hypothesis, the LIGO Scientific, Virgo, and KAGRA Collaborations, in conjunction with the NICER team, performed a search for a continuous gravitational-wave signal due to r-modes from the pulsar J0537-6910 .

There was already an attempt to search for r-modes from this pulsar using the public data from LIGOâs first and second observing runs (O1 and O2 respectively), but no X-ray timing was available during those runs. In our search, we make use of the most recent data from the third observing run of LIGO and Virgo observatories (known as the O3 data set).

The O3 data has a much lower noise level and considerably better quality than O1 and O2 data and, most importantly, overlaps with NICER observations of PSR J0537-6910 since 2017. The NICER data precisely tracks the rotation rate of the pulsar, allowing us to know exactly when glitches occur and to carefully analyse the gravitational-wave data between glitches, as illustrated in Figure 2, in order to produce the most sensitive search for a weak signal. The relation between the gravitational-wave frequency and the rotation rate of the pulsar is not precisely known, as it depends on the unknown mass and radius of the star. Therefore, it is necessary to search for signals in a range of gravitational-wave frequencies (namely, from about 86 to 97 Hz; see here for a search at different frequencies). Two independent methods were used to perform the search. Both methods involved matching the data between the glitches with a bank of templates modeling the gravitational-wave signal from the r-mode emission. The templates depended on two unknown parameters of the signal - frequency and the rate of change of frequency, which are related to the braking index. We do not find any evidence for a gravitational-wave signal, but this null result still enables us to place stringent constraints on theoretical models for r-mode driven spin-down in PSR J0537-6910. In particular, we obtain a series of upper limits on the amplitude of the gravitational waves emitted by the star, i.e. the value above which our search would have been sensitive enough to detect emission. Figure 3 compares our upper limit on the gravitational-wave amplitude to the predictions of theoretical models for r-mode driven spin-down of PSR J0537-6910. These predictions are represented by a band, as the exact amplitude depends on the unknown mass and radius of the star.

Our results indicate that we are probing well into the predicted region, and for some of the search methods we use, especially at high frequencies, the upper limits are well below the gravitational-wave amplitude suggested by theoretical models. In Figure 4, we present our results in terms of limits on the mass of the neutron star. Our searches exclude the possibility that PSR J0537-6910 could be a high mass neutron star emitting gravitational waves due to r-modes, but this scenario could still be possible for lower mass neutron stars. With the next observing run (O4) expected to take place in the second half of 2022, we will have a new opportunity to search for gravitational waves from pulsar J0537-6910 with more sensitive data from the network of LIGO, Virgo, and KAGRA detectors and hopefully with precise timing from the NICER X-ray telescope.

Figure 2: Timeline of the LIGO-Virgo O3 observing run, as well as J0537-6910 glitches, and epochs between glitches observed by the NICER X-ray telescope (located on the International Space Station). 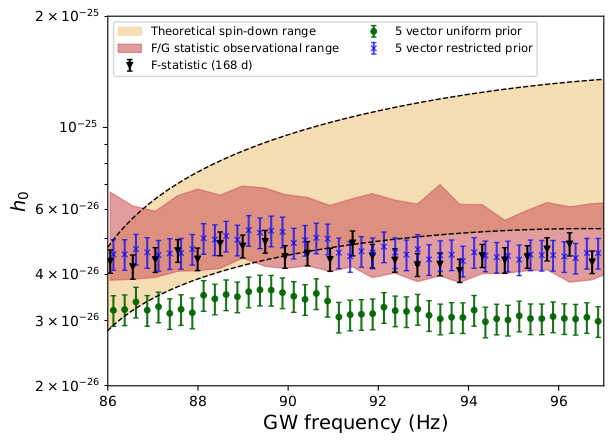 Figure 3: Selected upper limits on gravitational-wave amplitude h0(f) (vertical axis), as a function of the gravitational-wave frequency (horizontal axis), obtained by our searches making use of the so-called F/G-statistic and 5-vector methods. The dashed curves denote the theoretical spin-down range, whereas the dark shaded region marks the limits established by the search; see the article for more details. 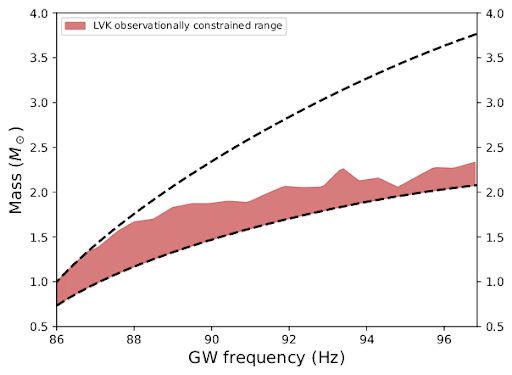 Figure 4: Limits on the mass of the pulsar J0537-6910 (vertical axis) as a function of gravitational-wave frequency (horizontal axis), under the assumption that gravitational-wave emission due to r-modes is causing the neutron star to spin down. The shaded region denotes the values not excluded by the search.