Dated 25 December 2020. Read this summary in PDF format (in English) and in other languages: Italian | Japanese | Polish | Portuguese | Spanish .

Pulsars are rapidly-rotating neutron stars, which are the collapsed cores of massive stars. They are extreme objects, more massive than the Sun yet no larger than a large city. Their densities are so high that a teaspoonful of neutron star material would have a mass of around 10 million tons (about the mass of a mountain on Earth), and their magnetic fields are hundreds of millions to trillions of times that of the Earth's.

We observe pulsars due to beams of electromagnetic radiation that continuously stream from their magnetic poles. Though this radiation is continuous, we only observe it in pulses, giving rise to the name “pulsars”. This is because the magnetic field is not aligned with the pulsar's rotation axis and therefore, like a lighthouse, we only see that radiation once per rotation (or, for some pulsars, twice per rotation) as the beam intersects with the Earth. We currently know of around 3000 pulsars within the Milky Way and nearby galaxies. The majority of pulsars are observed using radio telescopes, however some of the most energetic pulsars also produce intense high-energy radiation in the form of X-rays and gamma-rays.

Generally, we think of an object's luminosity as the total power of all the light it emits. But, we can also think of luminosity as the amount of energy of any form that an object emits, or loses, over time. As a spinning object slows its rotational kinetic energy decreases. Due to conservation of energy this kinetic energy must be dissipated or radiated away in some form. The rate at which the object's rotational energy decreases is therefore the same as the power it radiates, or in other words its “spin-down luminosity”. There is a huge reservoir of kinetic energy stored in a pulsar's fast rotation: if a pulsar spinning at 60 times per second were losing energy at the same rate as the Sun is through electromagnetic radiation, it would take somewhere around 600 million years to slow to a halt. Given the current energy consumption of humans on Earth, such a source could power our needs for around 10 sextillion (1022) years! However, by observing the change in rotation rate of pulsars we know that many are losing energy much faster than the Sun is, and very little of it is visible light. What form does that radiated energy take? We would like to know if a significant fraction of it is in the form of gravitational radiation.

The pulsar known as PSR J0537-6910 is one of the most unusual specimens, or outliers, compared to the general population of known pulsars. Its name is based on its location on the sky in the “equatorial” coordinates used by astronomers, with a right ascension of 5h 37m and a declination of -69 deg 10 arcmin, and the pulsar is located in the Large Magellanic Cloud — a smallish “satellite” galaxy orbiting the Milky Way. PSR J0537-6910 is special since it is losing energy faster than any of the other known pulsars, with its “spin-down luminosity” being about 5Ã1031 Watts, or roughly 100,000 times the luminosity of the Sun. In addition to its prodigious luminosity, PSR J0537-6910 is seen to have prolific glitching activity; a pulsar glitch is a phenomenon during which the pulsar experiences a sudden slight increase in its rotation rate.

Unlike most other pulsars, PSR J0537-6910 is not observed through pulses of radio waves, but is instead only observed via X-rays. X-rays do not penetrate the Earth's atmosphere, meaning only space-based telescopes can detect them. The pulsar was discovered, and subsequently monitored, using an X-ray telescope satellite called the Rossi X-ray Timing Explorer (RXTE) between 1996 and 2012 (at which point RXTE was decommissioned). In 2017, an X-ray telescope called the Neutron star Interior Composition Explorer (NICER), was installed on the International Space Station. Due to the interesting nature of PSR J0537-6910, it is a prime target for the NICER observing campaign. RXTE and NICER observations revealed the pulsar's unusually frequent glitching activity mentioned above and also provided intriguing evidence for how the star is losing energy between glitch events. A parameter known as the braking index tells how a pulsar slows down its rotation rate: different energy loss mechanisms that cause the slow-down give different values of the braking index. Values of 5 and 7 are expected for two different modes of gravitational-wave emission. In Figure 1, the NICER and RXTE observations suggest that the braking index may tend towards one of these values when there is a long time between glitches, meaning that gravitational-wave emission is a plausible explanation for the pulsar's slowing spin.

Given the exceptional nature of this object, the LIGO Scientific, Virgo and KAGRA Collaborations, in conjunction with the NICER team, performed a search for a continuous gravitational-wave signal from the pulsar. We made use of the most recent data from the LIGO and Virgo observatories (known as the O2 and O3 data sets), which overlap with the NICER observations of PSR J0537-6910 since 2017. The NICER data precisely tracks the rotation rate of the pulsar between glitches. This allows us to coherently integrate the gravitational-wave data and produce the most sensitive search for any weak signal. In the search, we assumed two different models for how the gravitational waves could be emitted: one in which the pulsar has an asymmetry about its equator (e.g., a “mountain”), which would produce emission at twice the star's rotation frequency (and is the mechanism that would be expected for a braking index of 5); another in which there could be emission at both once and twice the star's rotation frequency. Along with gravitational-wave observations, we also presented X-ray measurements of the most recent glitches of the pulsar.

We did not find any evidence for a gravitational-wave signal from the pulsar, but this null result still enables us to infer interesting information about PSR J0537-6910. Figure 2 shows the probability of different values of the star's ellipticity based on our data, where the ellipticity approximately describes the size of any deformation of the equator compared to the average radius of the star (roughly speaking, the height of the mountain). This probability distribution is consistent with an ellipticity of zero but also with small nonzero values, so we set an “upper limit” on its value. We set a 95% upper limit on the ellipticity of just over 0.00003, i.e., we are 95% confident that the ellipticity is below this value. This can roughly be translated as a mountain height of less than tens of cm, which is an impressive quantity to measure on an object over 160,000 light years (1.5 quintillion [1.5Ã1018] km) away. This upper limit is below what would be expected if all the star's spin-down luminosity were emitted via gravitational waves (known as the spin-down limit). It can be converted into an equivalent power radiated through gravitational waves, from which we can say that less than around 14% of the star's spin-down luminosity is going into gravitational-wave production. This means that more than ~86% of the spin-down energy loss is through other mechanisms; the prodigious magnetic field of the pulsar means that a major source of emission is through a mechanism known as magnetic dipole radiation and through accelerating charged particles to create a pulsar wind nebula. However, there could also be a different gravitational-wave emission mechanism at play: matter waves travelling around the surface of the star would produce gravitational waves at around 4/3 of its rotational frequency. These matter waves were not searched for in this work, but would cause a braking index of 7. 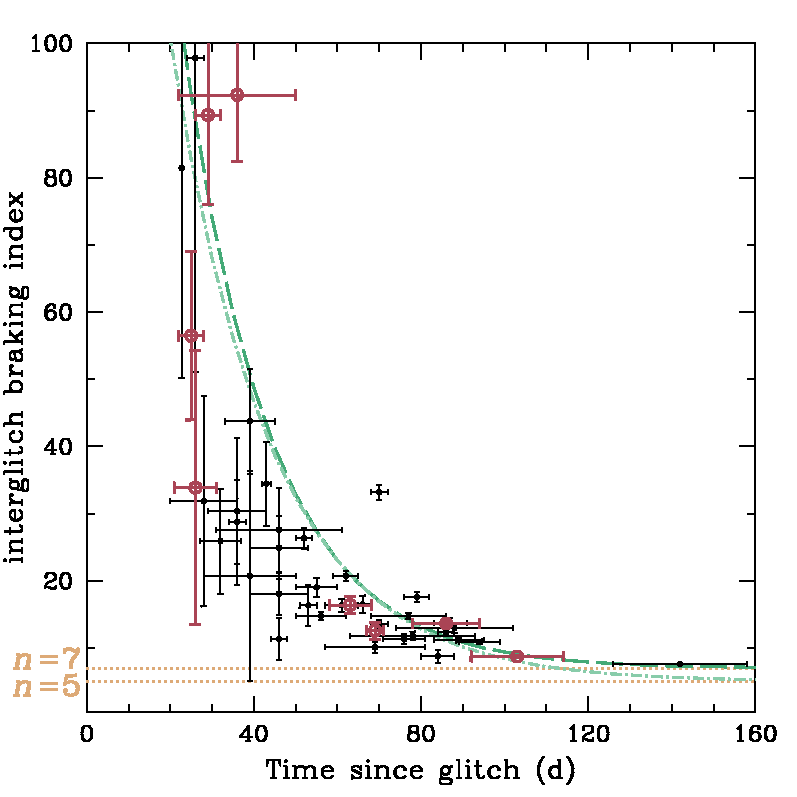 Figure 1: The braking index of PSR J0537-6910 as measured using X-ray data during the time intervals between each pulsar glitch. Red and black points are values from NICER and RXTE, respectively. As the time between each glitch increases, the braking index tends towards values close to 5 or 7. 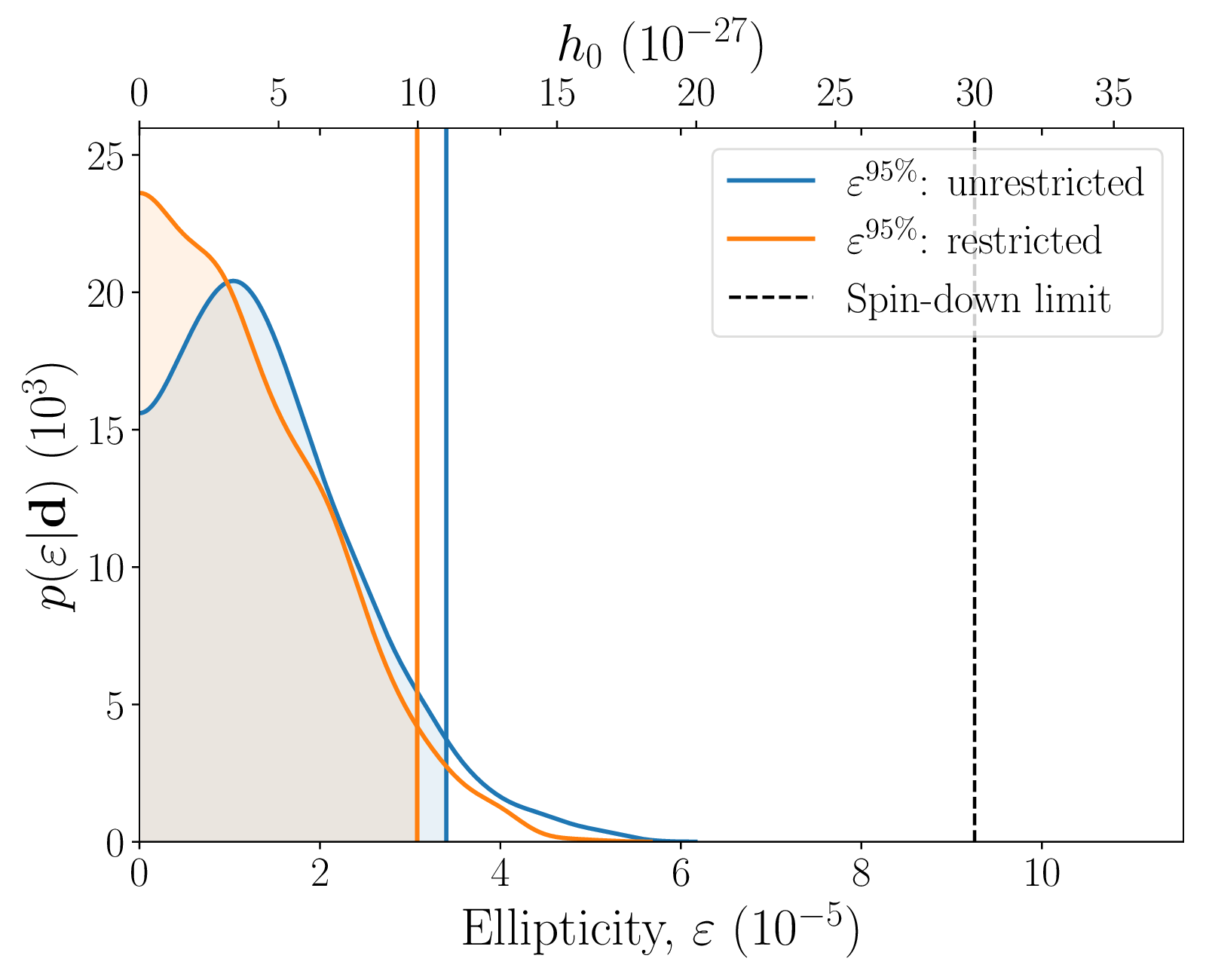 Figure 2: The probability distribution on the ellipticity of PSR J0537-6910 based on LIGO and Virgo data from the O2 and O3 observing runs. The two sets of curves represent the distributions obtained when making different assumptions about the orientation of the pulsar with respect to the Earth based on X-ray observations of a nebula surrounding the pulsar. Both cases give very similar results.