Searching for gravitational waves from neutron stars sipping on their companions

What are we looking for?

Spinning neutron stars are prime targets in the hunt for continuous gravitational waves (GWs). Unlike the GWs that have been observed so far, continuous GWs are long-lasting signals that should appear in our detector data all the time; the challenge is to find them. Many searches have been made for continuous GWs using LIGO and Virgo data, with no detection to speak of. However, even not making a detection can teach us something very interesting about neutron stars.

In this work we search for continuous GWs from a specific category of neutron star: accreting millisecond X-ray pulsars (AMXPs). Whatâs an AMXP? Letâs break it down:

When we do a continuous GW search, it is useful to know as much as possible about the object we are searching for. In the case of AMXPs, X-ray observations tell us the rotation frequency of the neutron star. We expect the continuous GW frequency to be related to the rotation frequency, so this helps us focus our search. It is also useful to know some details about the binary system that the neutron star lives in, such as the orbital period of the binary and how far the neutron star is from its companion. Again, X-ray observations provide this information for AMXPs.

Because we know an AMXP is accreting, at least occasionally, it is likely to emit a stronger signal than a neutron star living by itself. This is because the strength of the signal is proportional to the asymmetry of the neutron star. Accretion could build small mountains on the surface of the neutron star as material is funnelled by the magnetic field onto the magnetic poles. This is illustrated by the artist's impression shown in Figure 1. Accretion could also make the superfluid inside the neutron star âsloshâ around with a characteristic frequency called an âr-modeâ or Rossby wave (similar Rossby waves also occur in the Earthâs atmosphere and ocean). These different mechanisms will produce continuous GWs at different multiples of the starâs rotation frequency. For each target, we search three frequency âsub-bandsâ (small bands of frequency) at 1 times and 2 times the rotation frequency (for neutron star mountains), and 4/3 times the rotation frequency (for r-modes).

How and what did we search?

In our study, we searched for continuous GWs from 20 AMXPs, all of which have well-measured rotation frequencies and binary orbit information derived from X-ray observations. Fourteen of these targets hadnât been searched for continuous GWs before. We used LIGO data from the third observing run, which lasted from April 2019 to March 2020. The search is very fast, taking less than a day to run on a supercomputer. If we didnât know the rotation frequency and binary orbit precisely, the search would take months!

However, knowing the rotation frequency of the neutron star is not quite enough. The rotation frequency can, in fact, wander slightly over time, perhaps due to variations in the amount of matter accreted onto the neutron star. Our search technique can track a wandering frequency signal over time, and is called a hidden Markov model. This technique provides a way to track a wandering signal by analysing the data in separate chunks, each 10-days in length, and then finding the most probable wandering frequency path of the continuous gravitational wave signal over the entire 11 months of data.

Whenever we do a search, we have to be wary of the possibility of a false alarm: noise can sometimes look like a signal! We donât want to accidentally think weâve found a signal when it was just a loud noise fluctuation. To protect against this possibility, we simulate our search using data we know doesnât have a signal, and see how often we get candidates. These simulations are then converted into a detection threshold, which tells us how loud a potential candidate in the real data needs to be before we consider it interesting. When setting the threshold we have to judge what an acceptable probability of false alarm is. Set the probability of false alarm too low and you reduce the probability of detecting a true (but quiet) signal; set it too high and youâll have too many candidates to follow up, most of which will just be noise.

Did we see anything?

When we set our probability of false alarm to 1% for each target and sub-band we donât recover any candidates above threshold. When we set it to 30% per target and sub-band we have 16 candidates above threshold, which we show in Figure 2. Each AMXP has a different marker, and each marker is plotted according to the frequency in which we found it, and âpnoiseâ, the probability that we would see a candidate that loud if there were only noise in the data. If pnoise is low, the probability that the candidate is a real astrophysical signal is high.

For all five of the candidates with pnoise less than 0.1 we do some additional follow-up. For example, a true signal is loud even if we search for it slightly away from the target's position in the sky. We know that true signals behave like this from simulations of fake signals. For details on how we âpointâ the detectors, see this summary of a different continuous wave search. These follow-ups, however, didnât provide any convincing evidence that any of the candidates are anything other than loud noise fluctuations.

Bummer! What does this mean for the future?

First, if we assume we havenât seen anything, we can place limits on the size of the mountains on these neutron stars, and the amount of âsloshingâ from the r-modes mentioned earlier. We do so by injecting a series of fake signals of different strengths into the data from the detector, and seeing how well we can find them. For example, we know that any mountains on the surface of IGR J00291+5934 must be smaller than 3mm, otherwise we wouldâve detected continuous GWs from our search. We know this because we have injected a fake signal to simulate the signal that a 3mm mountain on IGR J00291+5934 would make and we could only just detect it.

Second, it means we should keep looking! The next observing run will be even more sensitive as the detectors are improved by successive upgrades. It may turn out that the candidates weâve spotted here are the first signs of a real signal, and we just need a little bit more data to pull it out of the noise. 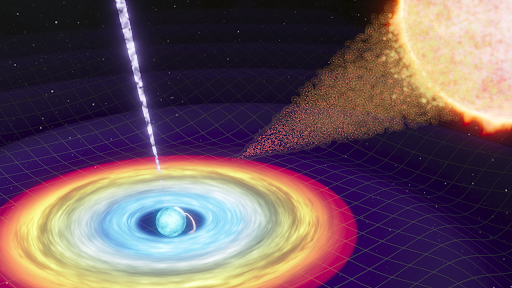 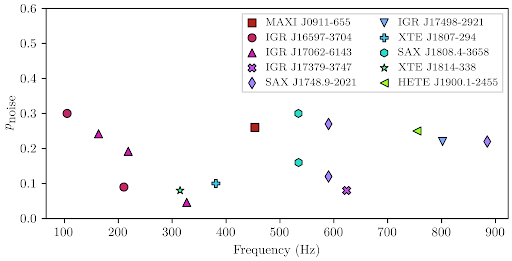 Figure 2: Summary of all candidates above threshold for each AMXP target. The horizontal axis shows the frequency of the signal. The vertical axis shows the probability that we would see a candidate this loud if there were only noise in the data, i.e., the probability of false alarm for each candidate. Note that each AMXP can be associated with more than one candidate found in the search (at the same frequency or at different frequencies). Adapted from Fig. 1 in the paper.