We present an updated catalog (GWTC-2 or the "Gravitational-Wave Transient Catalog 2") of gravitational-wave detections by LIGO and Virgo from the very first observation in 2015 to the end of O3a, the first half of the third observing period. O3a ran from April 1st to October 1st, 2019, and added 39 gravitational-wave events to the 11 confirmed events listed in GWTC-1, bringing the total to 50 events in GWTC-2. The discoveries of O3a span a wide range of astrophysical parameters and represent sources consistent with the coalescences of binary black holes (BBH), binary neutron stars (BNS), and neutron star black hole (NSBH) binaries.

Remarkably, O3a produced about three times more confidently-detected gravitational-wave events than the two previous observing periods (O1 and O2) combined. Furthermore, the Virgo detector was able to join the two LIGO detectors for the full duration of O3a, with at least one detector observing for about 97% of the time, and at least two observing for about 82% of the time. Some especially interesting O3a events include the second ever gravitational-wave observation consistent with a binary neutron star merger, the first events with unequivocally unequal masses, and a very massive black hole binary with a total mass of about 150 times the mass of the Sun. In this summary we describe the improvements within LIGO and Virgo which made this possible as well as the significance of these events to the field of astrophysics.

The 39 discoveries of O3a are the result of upgrades to the LIGO and Virgo observatories, enhanced data quality, and a variety of gravitational-wave searches. Recent improvements in instrumentation to reduce noise and increase sensitivity include more powerful lasers, new and improved mirrors, and better control of scattered light. These changes led to an increase in both the frequency and distance ranges for all three detectors, extending our view of the universe. On average between the three detectors, the median range in which we can observe a typical neutron star merger increased by about 63% from O2 to O3a, as shown in Figure 1.

Another vital step to the discovery of gravitational-wave sources is refining the raw data from the detectors. This data conditioning process involves calibrating the data, subtracting noise, and removing glitches. First, we calibrate the raw optical power variations from each detector into dimensionless strain in near real-time for initial detections. Later we recalibrate the data to reduce systematic error and subtract noise to further increase the range in which we can detect gravitational-wave sources, revealing fainter signals in the data.

In the analysis of gravitational-wave data, the most common data quality issue we encounter is glitches. Glitches are short-duration noise transients, some of which have sources such as a mechanical camera shutter or light scattering out of the laser beam. Other glitches however are more mysterious in origin, such as broadband short-duration glitches called blips. One way in which we identify and classify glitches in the LIGO and Virgo data is through the Gravity Spy platform with the help of thousands of citizen scientists (see how you can help us identify glitches with Gravity Spy). After we identify significant glitches in the data, we apply glitch subtraction to remove them from gravitational-wave candidates, as shown in Figure 2. Eight of the 39 events we observed in O3a benefitted from glitch subtraction as a pre-processing step before parameter estimation analysis.

In the search for gravitational waves, candidate identification happens on two timescales. First, multiple search pipelines process the data immediately with the goal of generating public detection alerts in minutes. Later, we reanalyze the gravitational-wave data to produce the curated list of candidates in this catalog, using updated data calibration, data quality assessments, and improved methods to calculate statistical significance. In deciding which candidates make the cut, we impose a false alarm rate threshold of two per year, which is the rate at which we expect this type of candidate to occur by chance due to noise. Of the 39 events in O3a, 26 were previously reported in near real-time detection alerts, while 13 are reported in GWTC-2 for the first time.

In GWTC-2 we have introduced a revised naming convention for our reported gravitational-wave events. The old convention of just using the date of the observation continues for previously published events, including the most recent GW190412, GW190425, GW190521 and GW190814. But the new GWTC-2 events get the UTC time of their detection added to their name; for example GW190701_203306 (see Figure 2) was detected at 20:33:06 UTC on July 1st 2019. This way, we can have unique names even for two events detected on the same day, as happened three times in O3a.

We investigate the astrophysical nature of each event through a process called parameter estimation, which reveals the values of numerous astrophysical properties unique to each gravitational-wave event. We measure extrinsic parameters which describe a binary's relationship with us here on Earth such as the distance to the source, location of the source in the sky, and orientation of the binary from the point of view of an observer on Earth. Additionally, we measure intrinsic parameters which refer to properties such as the masses and spins of each compact object in the binary. From the event parameters, we compute gravitational waveforms which represent the expected gravitational-wave strain over time. We then compare this prediction to data measured in LIGO and Virgo, accounting for any noise present in the detectors. Through these parameter estimation techniques, we produce 90% credible intervals which represent the range of values which are reasonably consistent with the data.

Our 39 events span a wide range of masses encoding a wealth of information on the history and formation of black holes and neutron stars throughout the universe. The gravitational-wave signal generated well before the merger mainly depends on a special combination of the individual masses of the components, called the chirp mass. Other important mass parameters include the total mass of each binary (the sum of the compact object masses) and the mass ratio, which represents the ratio of the lighter compact object to the heavier.

Figure 3 illustrates the diversity of masses in GWTC-2, ranging from neutron stars around 1.4 solar masses to a black hole around 150 solar masses. Figures 4 and 5 highlight the following eight events, four of which are described in individual publications:

Additionally, GWTC-2 includes events spanning the so-called “lower mass gap” between 2.5 and 5 solar masses. For many years, astrophysicists theorized the existence of this lower mass gap due to the scarcity of observations within this mass range. However, O3a produced potential “mass-gap” objects, such as the lighter companions of GW190814 and GW190924_021846.

GWTC-2 presents objects with more asymmetric masses than any source presented in GWTC-1, such as GW190412 and GW190814 which both originate from the merger of a black hole with a lighter companion. Asymmetric mergers amplify the tone of higher harmonics, as exhibited in the detection of GW190412. This updated catalog includes several other unique feats for gravitational-wave astronomy. O3a includes the most distant event detected to-date as well as nine events localized to less than 1% of the sky's total area.

A Bright Future For Gravitational-Wave Astronomy

The future of gravitational-wave astronomy is increasingly promising after the addition of 39 events from the first six months of the O3 observing period. Analysis of the second portion of O3 (called O3b) is currently in progress and will further expand our growing gravitational-wave transient catalog. Following O3, detectors will undergo additional engineering improvements to further increase astrophysical reach in time for the fourth observing run. While we await instrumental improvements and the construction of new detectors, the gravitational-wave community will continue to explore the nature of black holes and neutron stars throughout the universe. 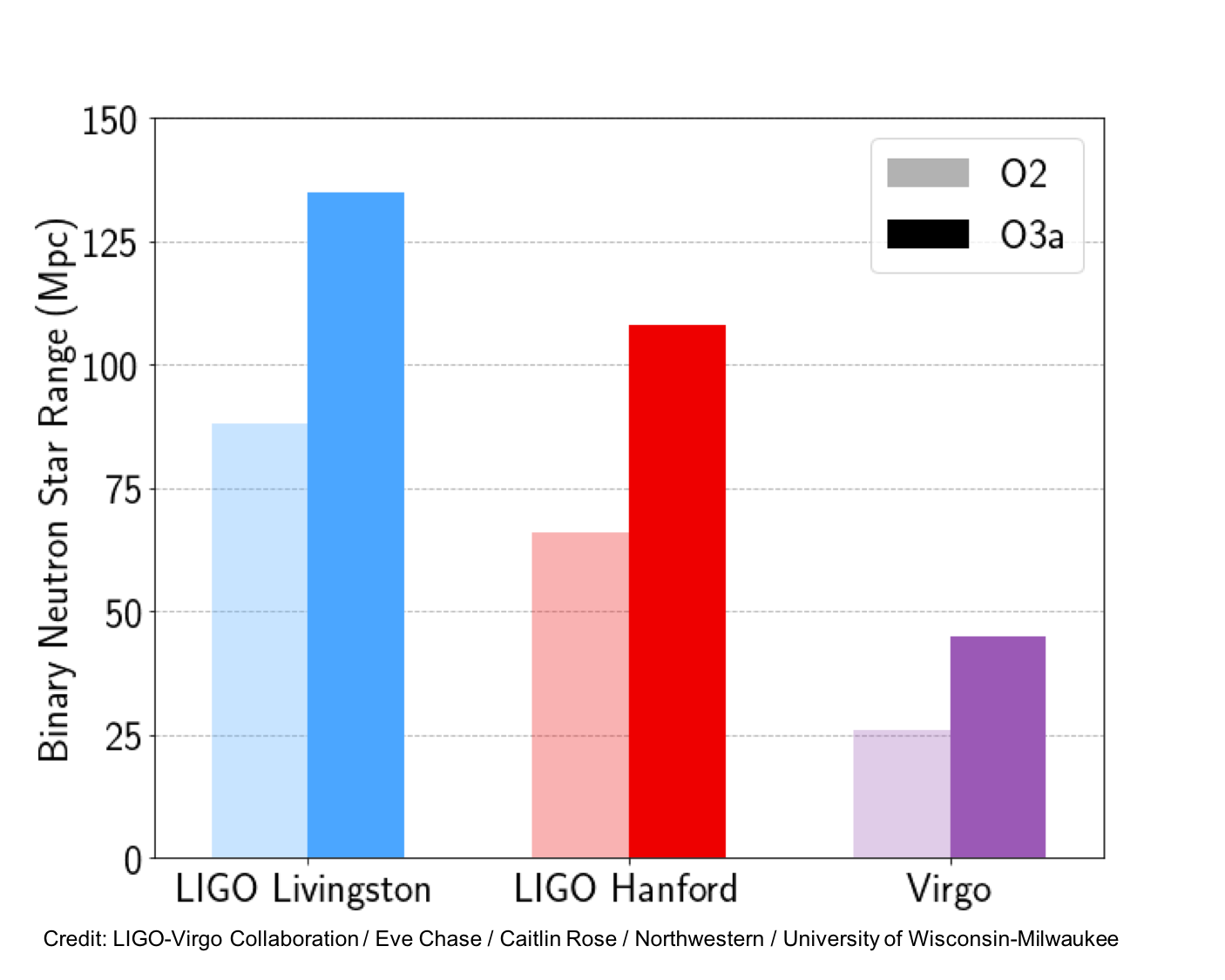 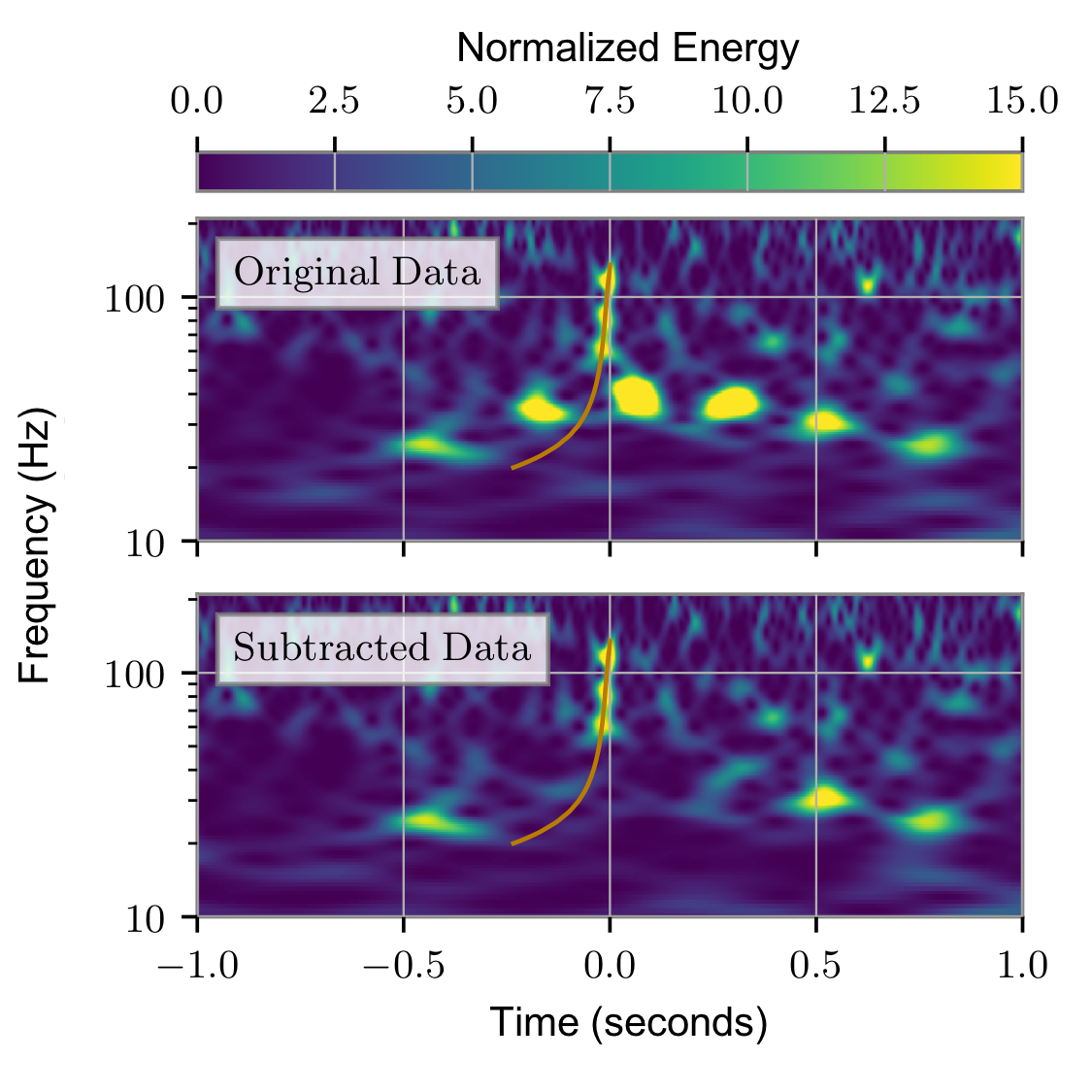 Figure 2: The time-frequency data of event GW190701_203306 before and after glitch subtraction. In this case, scattered light in the LIGO Livingston detector created a glitch in the form of excess noise at frequencies below ~40 Hz. (Adapted from Fig. 5 of our paper.) 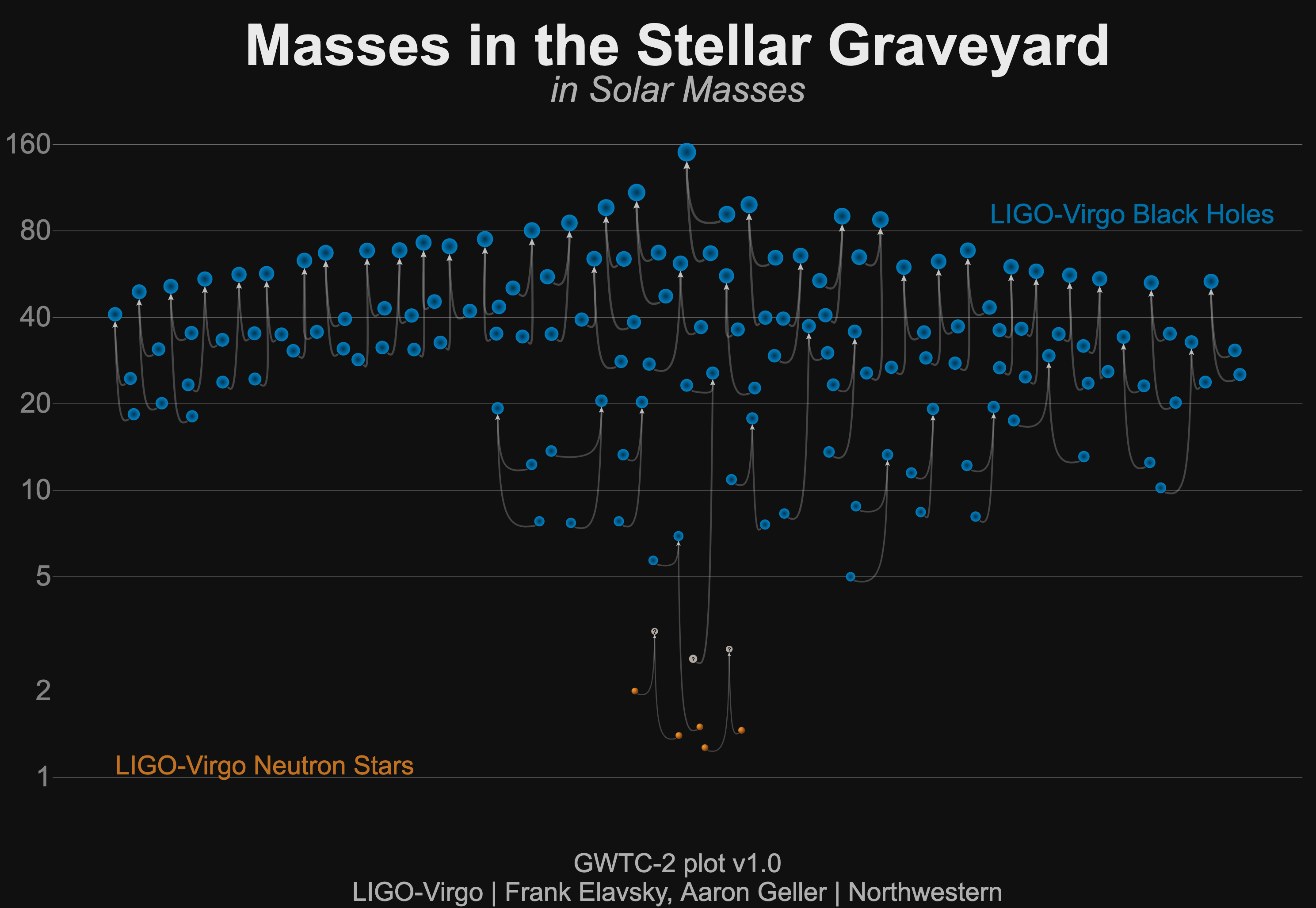 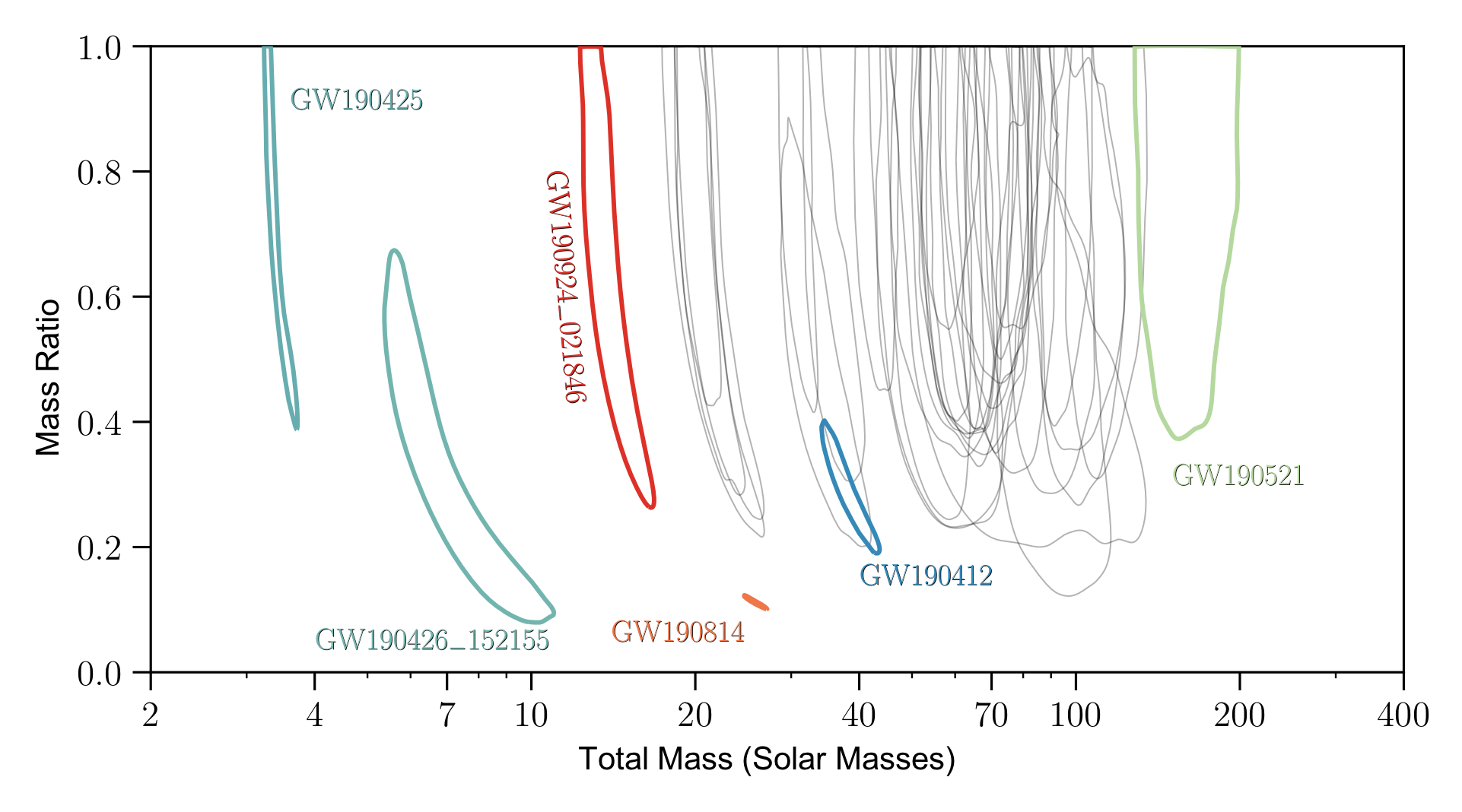 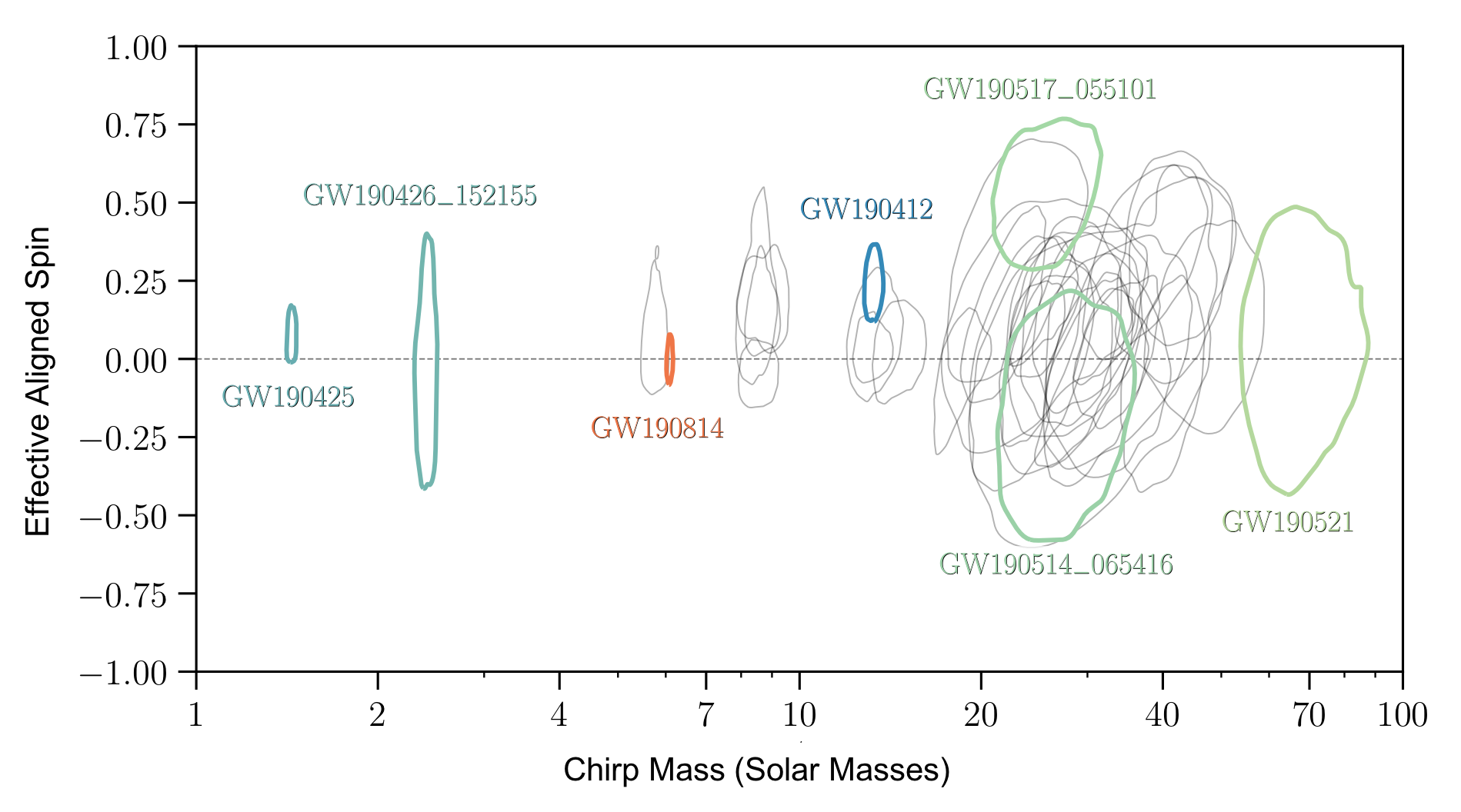