GWTC-2.1: Extended catalog of Binary Mergers Observed by LIGO and Virgo During the First Half of the Third Observing Run

Dated 02 August 2021. Read this summary in PDF format (in English) and in other languages: Italian | Japanese .

We present an updated catalog of gravitational wave (GW) candidates from data gathered by the LIGO and Virgo detectors during the first half of the third observing run (O3a). This update, called GWTC-2.1 (Gravitational Wave Transient Catalog 2.1), corresponds to the same observing period as GWTC-2, starting from 1 April 2019 and ending 1 October 2019, but includes candidate events with a lower statistical significance to aid with multi-messenger searches, and takes advantage of improvements in the data processing and analysis methods.

When gravitational waves (GWs) are emitted by an astrophysical event (usually a collision between two compact objects), they travel through space and eventually through the Earth causing the mirrors of GW detectors to move ever so slightly. GW detectors are excellent at sensing this motion. However, since many phenomena that are not GWs can also make mirrors move, sometimes we may see a wiggle that looks like a weak GW signal but itâs really not. Similarly, a true GW signal might be buried under a lot of other noise, which makes it hard to confidently identify something in the data as truly astrophysical in nature. For this reason, initial attention is paid to signals (often referred to as âcandidate eventsâ or just âeventsâ) that are stronger, and as such are unambiguously identified as GWs (at least with a high degree of probability).

GW events that pass a certain threshold of high significance are released in catalogs (Gravitational Wave Transient Catalogs, or GWTCs). The LIGO and Virgo scientific collaborations released in 2020 our second such catalog, GWTC-2. That catalog includes all GW events from the earlier GWTC-1 and those found during the first half of the third observing run (O3a) with false-alarm rate (FAR) lower than 2 per year. A total of 39 new GW signals from O3a were identified in that catalog, with a few exceptional events amongst them.

There is still a lot of science to be done with the weaker signals as well. Some astrophysical events emit multiple types of radiation in addition to GWs, namely electromagnetic waves (light) and neutrinos. The main goal of creating this updated catalog is to enhance the probability of finding GW candidates that match up in time and location with these other types of astrophysical signals, which would indicate they are all emitted by the same event. This would lead to new multi-messenger discoveries which would add to the famous merging neutron stars detected in 2017 with both GWs and light (see here to learn more about that exciting discovery). Since there are many more lower-significance events buried in the data than high-significance ones, the chances of finding a rare multi-messenger event improve. This is the main reason for looking at weaker signals.

But looking through data for weak GWs is challenging, since there is a fair bit of noise and some of it looks like a signal. This latest catalog takes advantage of many improvements in the data and data-analysis techniques. For example, the searches for this updated catalog use data that are better both in terms of calibration accuracy and noise subtraction. Candidate identification is then performed with three matched-filter algorithms using data from all three detectors (LIGO Hanford, LIGO Livingston, and Virgo), unlike GWTC-2, where only one algorithm analyzed data from the three-detector network.

GWTC-2.1 includes any candidate event with FAR lower than 2 per day, which is much higher than the 2 per year threshold in GWTC-2. For each of these, search algorithms compute a probability that the candidate is of astrophysical origin (pastro), or is terrestrial (pterr, meaning itâs just noise). Any candidate event that is more likely than not to be a real astrophysical event (meaning it was given pastro>0.5 by any of the three algorithms) is followed up for a better determination of its astrophysical origin.

Catalog GWTC-2.1 presents 1201 candidates. We actually expect that most of these candidates are likely to be noise. But using this GW catalog and data from telescopes, astronomers can try to identify potential multi-messenger events. Among the 1201 candidate events, 44 have probability higher than 50% of being of astrophysical origin, 36 of which have already been reported in GWTC-2, while 8 are new. These 8 most promising new candidates are shown in Figure 1.

Summary of the 8 most promising new candidates

In the following we discuss the astrophysical properties of the 8 new candidates under the assumption that they are all genuine GW signals, i.e. not due to noise fluctuations. All new candidate events are consistent with Binary Black Hole (BBH) mergers , but one of them could also be a Neutron Star-Black Hole (NSBH) merger (like the two detections of such events which we recently announced, from the more recent O3b data). The majority of events have component compact objects with similar masses (mass ratio q≈1) but there are a couple of exceptions to this. Figure 2 showcases the mass ratios of the 8 events. GW190917_114630 (pastro=0.77) is the potential NSBH event, and it is clearly seen on the lower left of the figure (in this figure, lower left implies a lighter binary with unequal masses).

Another interesting aspect of the new events is related to their spins (how fast they rotate). First, most new compact objects in this catalog have spins consistent with zero, as was also the case for GWTC-2. Interestingly, GW190403_051519 (pastro=0.61) and GW190805_211137 (pastro=0.95) both have a greater than 50% probability that at least one BH has dimensionless spin χ>0.8 (χ=1 being the maximum spin a black hole can have). However, the individual spins are not as well constrained by the GW signal as a certain combination of the two component spins, the so-called effective inspiral spin, χeff. Previous GW detections have shown that there is a surplus of mergers with χeff>0, and this trend continues with the new events (see Figure 3).

Much of the astrophysics that we can learn from GW signals relies on the population statistics of the detections. For example, questions such as âhow many binary black-hole systems are out there?â, âwhat is their mass distribution?â, and âhow did the black-hole formation rate evolve in cosmic time?â, require that we expand the GW catalogs. This new catalog adds new candidate events, which, added to the previously known set, improve our chances to answer such questions, or at least our ability to make better guesses. In addition, it provides a number of candidates worth combining with telescope data to search for possible multi-messenger astronomy observations.

On the other hand, individual events can sometimes give intriguing clues about astrophysics and cosmology. As mentioned above, this catalog reports two candidates which, if astrophysical, have exceptionally high mass: GW190426_190642 and GW190403_051519. In both cases, the mass of the primary compact object (i.e. the more massive of the two objects in the binary) likely falls within the so called pair-instability mass gap. This is a range of masses, between about 65 and 120 times the mass of the Sun, for which models indicate that a black hole cannot be formed from the collapse of an ordinary star at the end of its life. This could either point to a different way of forming them (e.g. as a result of the previous merger of another pair of BHs), or that stellar evolution models need to be updated to allow stars to form BHs with such high masses. It is worth noting that the catalog GWTC-2 already included a GW signal (namely GW190521) whose primary BH populated the same âforbiddenâ interval.

For more information on these figures and how they were produced, read the freely available preprint. You can click on each figure for a bigger version.

Figure 1 (Figure 2 from the paper): Parameters inferred from the signal for the 8 more significant event candidates in this catalog. From left to right, the figure shows the primary mass m1 and secondary mass m2 (each in units of the solar mass Mâ), the mass ratio q, the effective inspiral spin Ïeff and the luminosity distance DL (in Gigaparsec). The vertical width of each colored region is proportional to the probability that the parameter has the corresponding value on the horizontal axis. 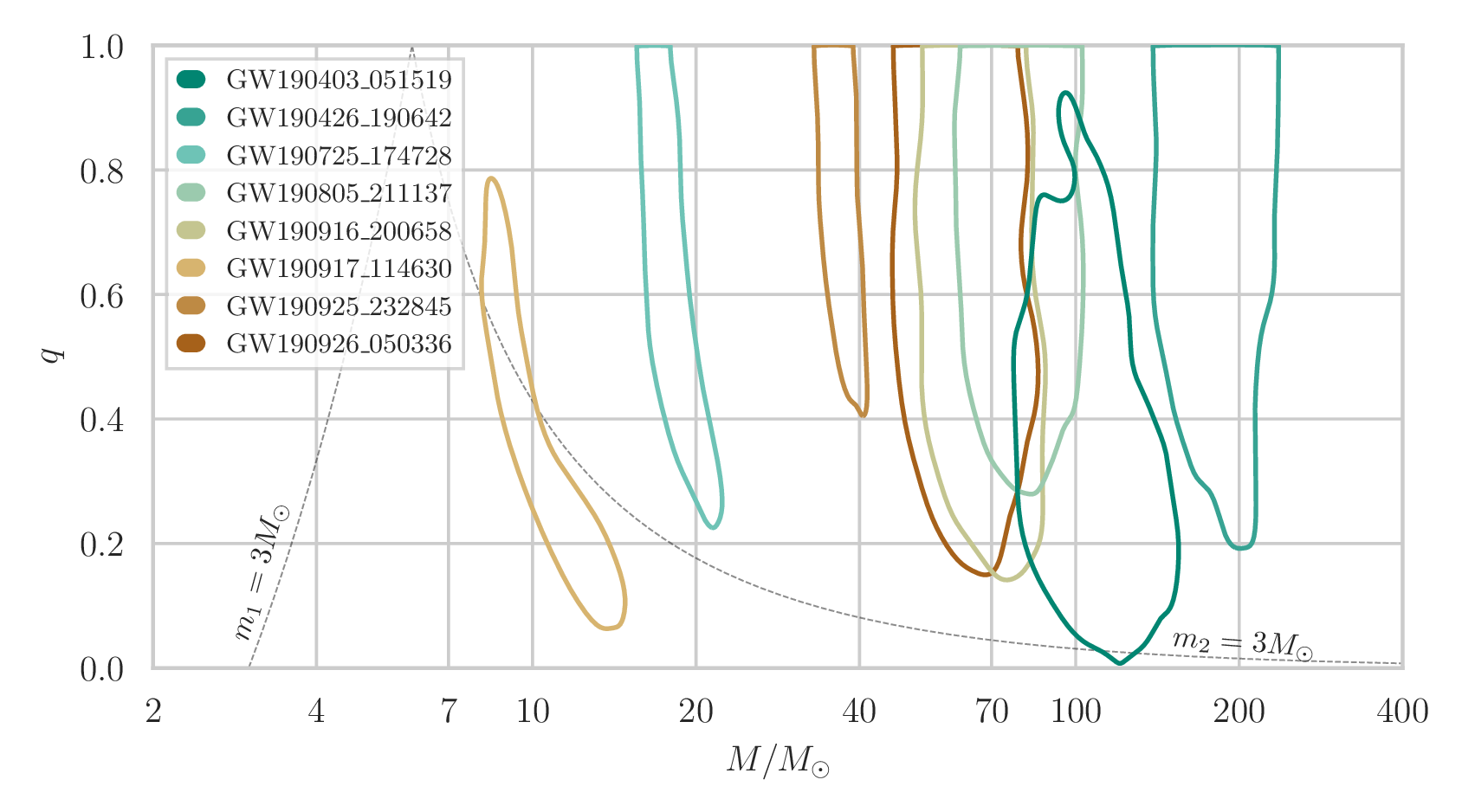 Figure 2 (Figure 3 from the paper): Total mass (in units of the solar mass Mâ) and mass ratio q for all new events. Each colored contour represents a given event and encompasses an area in which its total mass and mass ratio falls with 90% probability. The events follow the same color scheme used in Fig. 1. The dashed lines act to separate regions where the primary/secondary binary component can have a mass below 3Mâ. 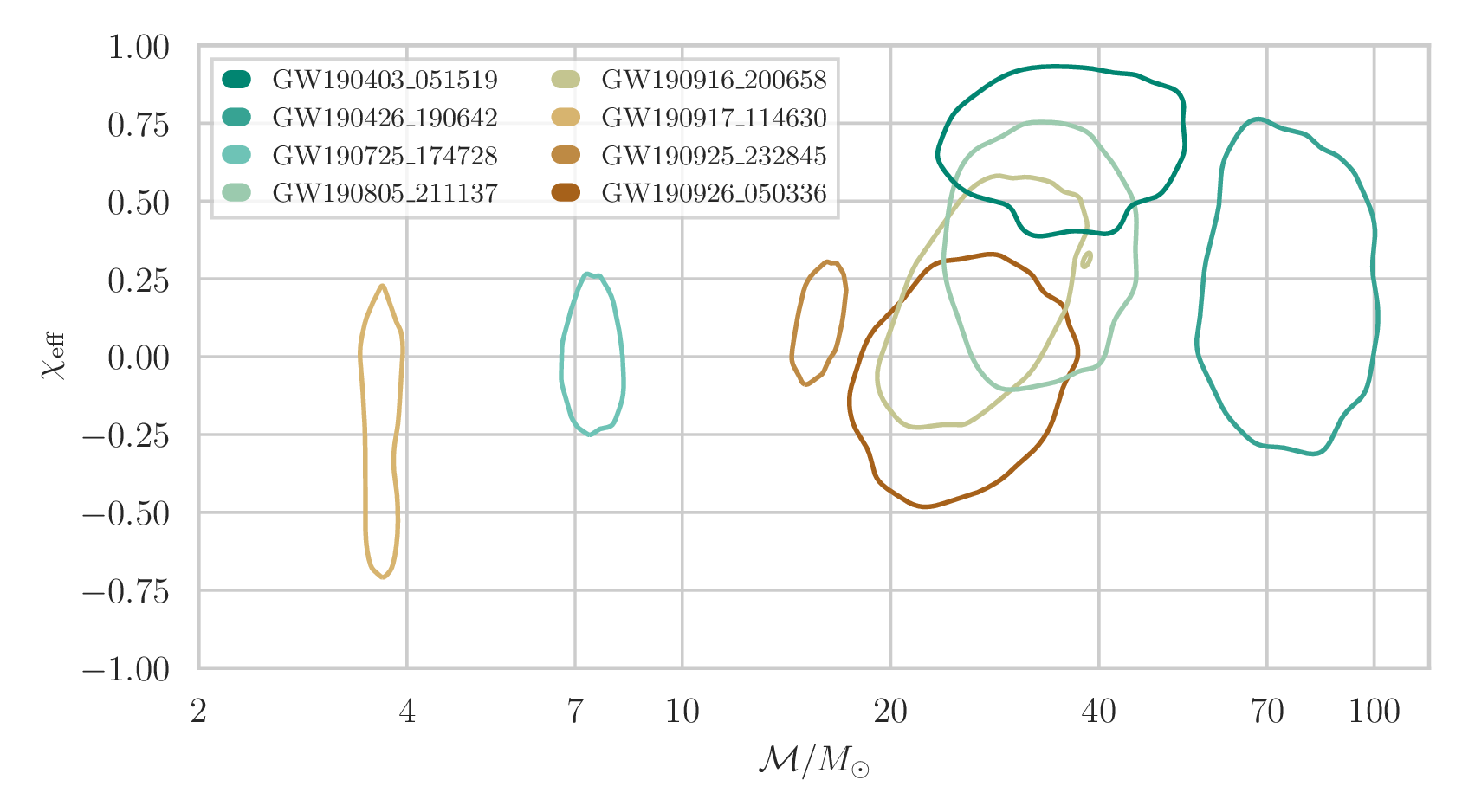 Figure 3 (Figure 4 from the paper): Chirp mass M (in units of the solar mass Mâ) and effective inspiral spin Ïeff for all new events. Each colored contour represents a given event and encompasses an area in which its chirp mass and effective spin falls with 90% probability.