Dated 28 October 2020. Read this summary in PDF format (in English) and in other languages: Chinese (traditional) | French | Italian | Japanese .

What are typical black holes like? How many are there? Has the population of black holes changed as the Universe evolved? What can we learn about the formation of binary black holes using gravitational waves?

The third observing run of the LIGO and Virgo observatories, O3a, is finished, and with it, the assembly of our second catalog of gravitational wave observations (GWTC-2). With the new catalogue, we have more than quadrupled the number of gravitational-wave events confidently identified in our previous catalog, (GWTC-1). And just as our first catalog unveiled new distinct populations and created new questions about their origin with respect to the black holes we knew about from electromagnetic observations, this catalog raises new questions about the underlying astrophysical population and challenges our current best theories of binary black hole formation.

Astrophysical black holes are described by two properties: their mass and their spin. Astrophysical black hole BINARIES are further characterized by the orientation of the black hole's spin with respect to the plane of the binary, and the distance to the binary. With distance, we gain a proxy to the cosmic time when the binary merged, since we know that gravitational waves travel at the speed of light.

Scientists have proposed three possible binary black hole formation scenarios: “in-the-field”, dynamical, and primordial. Primordial black hole binaries are made of black holes that were never stars. These black holes formed by density fluctuations in the first few minutes of the universe, right after the big bang. In-the-field binaries are made from black holes that are the last stage in the life of some stars, stars that collapsed under their own gravity. Dynamical binaries are made by black holes formed far apart, and only later, running into each other by virtue of a dense environment. Each scenario is associated with different distributions of the binary parameters — parameters that we can measure and which can help us distinguish between these different kinds of binaries. For instance, dynamical binaries are expected to have misaligned spins, whereas in general, in-the-field binaries should be aligned.

The binaries found in this catalog widen the mass range for binary black hole systems found in the previous one. On the lower end, they bridge the mysterious mass gap between the heaviest neutron stars and the black hole population. On the higher end, they go beyond the mass cutoff predicted by pair-instability supernova. Their spins are also measurably non-zero and at least partially counter-aligned with their overall angular momentum, hinting towards the existence of a dynamically formed portion of the population. These and other key findings in this catalog are big steps towards answering, and even asking, the right questions about the population of binary black holes that occupy our Universe.

Data for O3a, measured using the Advanced LIGO and Virgo detectors, were collected from April to October of 2019. During this time, 39 new mergers were observed: one binary neutron star, 36 confident binary black holes, and two possible neutron-star black hole candidates. Including the 11 mergers from GWTC-1, that makes 50 detected events in GWTC-2, all with a false-alarm-rate of less than two per year. For purity's sake, in this population analysis, we chose a false-alarm-rate of 1 per year. This restricted the sample to 47 candidates.

In GWTC-1, the underlying mass distribution was fit well with a truncated power-law with an index between -0.1 and 3.1 starting at ∼7.9 M☉ and ending at ∼42.0 M☉. The value of low-mass cutoff was mysterious and not well constrained. The high-mass cutoff was explained by the onset of a pair-instability supernova, a supernova thought to happen when a very massive star reaches enough density to produce electron-positron pairs, creating a sudden drop in the internal pressure of the star. This leads to a collapse and explosion that obliterates the star, leaving behind no black hole remnant. Pair-instability supernovae are thought to prevent black holes with masses between ∼50–150 M☉ forming from supernovae.

With GWTC-2, all of the above has changed. The lightest black hole is smaller than what was believed possible (2.3 M☉ or 6M☉ depending on whether or not the lower mass object in GW190814 is a black hole or a neutron star) and the most massive black hole is larger (85 M☉ or 55 M☉ depending on whether or not we include GW190521, an extreme event in which one of the black holes has a mass of ∼85 M☉). The preferred distribution is now a power-law with an index between 2.00 and 2.73. Instead of a sharp cutoff at high masses, the distribution is better characterized with an added bell curve peak set somewhere between 28.0 and 38.0 M☉. What could be the explanation for such a peak? Highly dense stellar environments, like those within the cores of globular clusters, could make it possible for passing black holes to disturb the gravitational potential of binary black holes, tightening the binaries and enhancing their merger rate. Such binaries are said to merge through dynamical interactions.

Dynamical interactions create a particular mass and spin distribution of merging black holes. Conservation of momentum favors larger masses ending up with smaller velocities, and smaller masses with larger velocities, bounding higher mass objects to orbits closer to the center of the cluster. Higher mass binaries will thus be in a denser environment, having a higher chance of dynamical interaction, and hence higher counts in the mass distribution of merging black holes. If the black holes produced by dynamical mergers merge with another black hole later on (a so-called second-generation binary), it may be possible to see black holes merging in the pair instability gap. Other formation mechanisms, like primordial black holes, could also produce one or more bell-curve features in the mass spectrum.

Alternatively, if the sharp cutoff predicted to be the signature of pair instability supernova could be smoothed out, this pile-up of high mass binaries could be explained without the need for dynamical interactions.

The different formation scenarios were accounted for by adding a bell-curve on top of our power-law baseline distribution. If more than one generation were to be present, we modeled this by adding extra bell-curves at higher masses. Figure 2 shows the different astrophysical population models we tested.

Finally, while each GWTC-1 binary had very similar component masses (mass ratios close to 1), GWTC-2 has two events, GW190814 and GW190412, with mass ratios unambiguously different than 1. Being both an outlier in minimum component mass and mass ratio, GW190814 seems to be indicative of a new population.

Binary black holes formed in the field are believed to contain components with nearly aligned spins, whereas dynamically merged binaries are expected to be misaligned. As a result, dynamical mergers are expected to undergo precession, and about half of them should have anti-aligned spins.

While the binary black hole candidates in GWTC-1 yielded no evidence for this relativistic spin precession, we see signs of precession in GWTC-2. Furthermore, overall preferring small spins aligned with the orbital angular momentum, the catalog shows that between 2% and 50% of binary black holes have anti-aligned spins (this even when removing GW190814, our biggest outlier in all categories).

Binary black holes formed from merger products are expected to inherit most of their spin from the orbital angular momentum of the progenitor binaries. Hence, a smoking gun detection for dynamical formation would be the identification of different spin distributions in different mass components. However, we find no evidence of such a population.

The universe is believed to be expanding homogeneously and it's been doing so ever since the big bang. This expansion stretches everything within it, including electromagnetic and gravitational waves. As a wave stretches, its frequency changes. For visible light, this implies going from blue to red, that is, “redshifting”. The further away the object is, the greater the expansion, and the greater the redshift. Hence, redshift is also another measure of distance, and, since the velocity of light and gravitational waves is fixed, also of time. The higher the redshift of our merging binary, the older the binary.

Measuring the redshift evolution of the binary black hole merger rate, and comparing it to the stellar formation rate, enables us to better understand how compact binaries form. If we were to make a cube with side lengths 1000 times the distance to the Andromeda galaxy, we find that, every year, there are about 11 binary mergers in such a cube. As figure 4 shows, this rate is both consistent with a distribution of binaries that doesn't evolve over cosmic times, as well as a distribution that locally tracks the star formation rate. We also find, given the longer observing time and only one new detection, that the number of binary neutron star mergers in the same size cube would be 151, a number smaller than in GWTC-1.

While a clearer picture is emerging of the population properties of compact binaries, key questions remain: How do we best characterize the deviations from power-law in the primary black hole mass spectrum, and what is the physical origin of these new features? What is the origin of binary black hole mergers in the high-mass gap: hierarchical mergers, stars producing remnants heavier than expected from pair instability supernovae theory, or something else? Is the observation of anti-aligned spins indicative of dynamical mergers? This hypothesis might be confirmed by observations of eccentric binaries, which are also expected from dynamical mergers. The unambiguous detection of hierarchical mergers (characterized by high mass and high spin) could also provide strong circumstantial evidence for the role of hierarchical mergers in the LIGO-Virgo bandwidth. 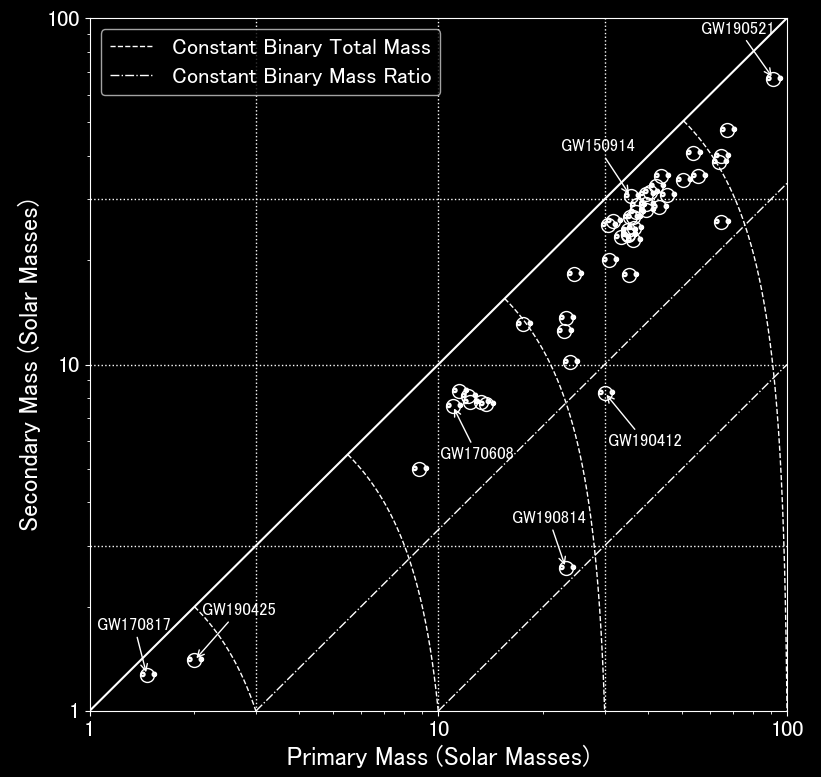 Figure 1: Masses of the binary component objects for the merger events observed in O1, O2 and O3a that were used to infer population properties in this paper. Selected individual events have been highlighted. Click for a larger version. (Credit: LIGO-Virgo Collaboration / IGFAE / Thomas Dent.) 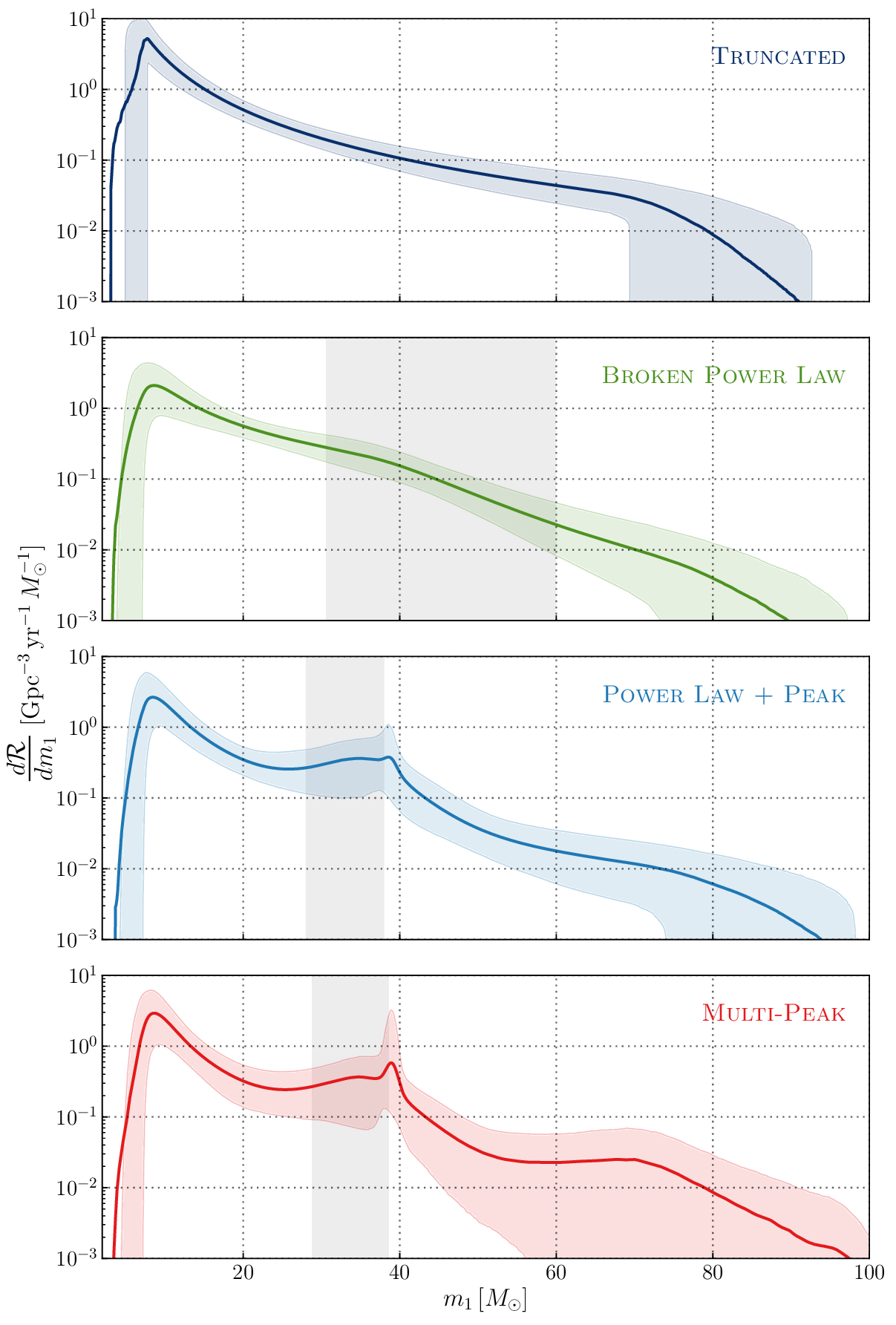 Figure 2: This plot shows the chance of measuring a given black hole mass for four different assumptions of the shape of the underlying mass distribution. The solid curve is the average while the shaded region shows the 90 % credible interval. Models with a peak in the distribution are preferred by the data. (Fig. 3 of our paper.) 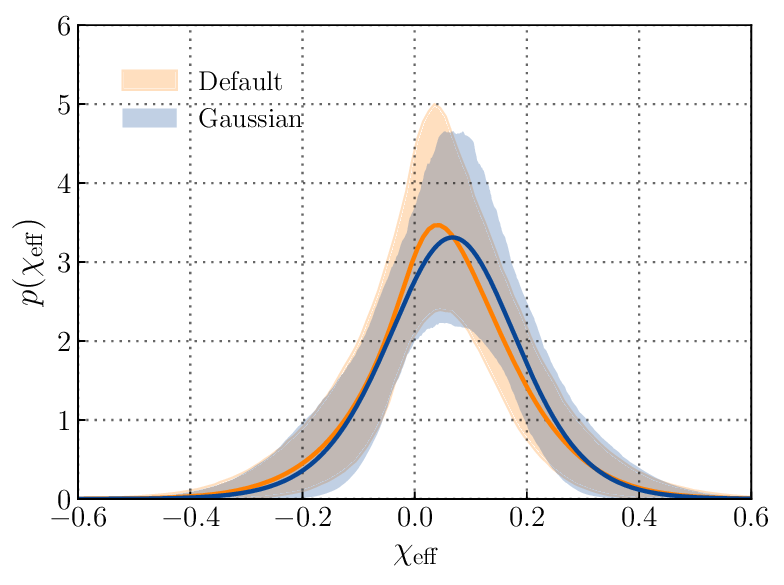 Figure 3: This plot shows the distribution of the effective spin parameter χeff for two different models. One can see that while most spins will be aligned with the orbital angular momentum, there is a significant fraction that will have a part of its spin rotating in the opposite direction. (Fig. 11 of our paper.) 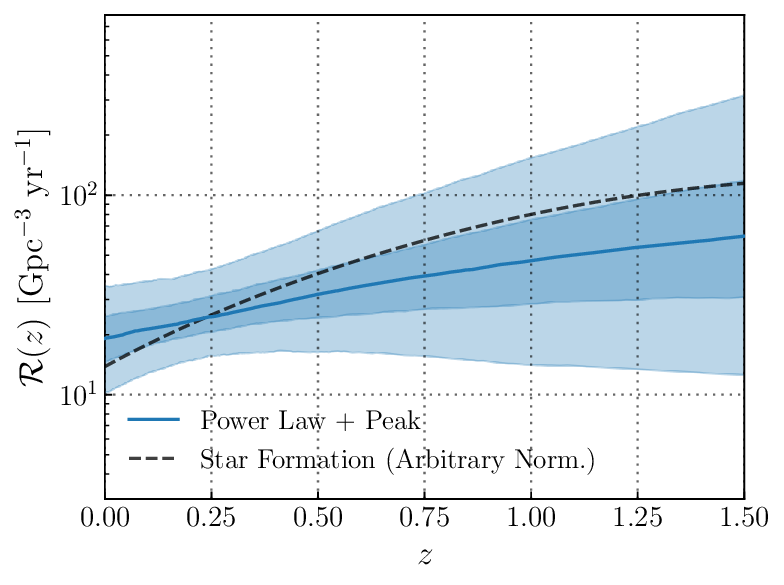 Figure 4: The merger rate density as a function of redshift, fit to the 'Power-Law Evolution' model. The solid line shows the median rate density, while the dark (light) shaded region shows 1σ (2σ) credible intervals. The data exhibit a mild preference for redshift evolution of the merger rate, but is consistent with a flat distribution. (Fig. 14 of our paper.)