In O3b, KAGRA joined LIGO and Virgo for the final part of the run and in April 2020 completed a two-week observation run with the GEO 600 detector located in Germany. The results of this observing run will be presented separately.

In this summary you can read about how we collect our data, how we make detections, how we estimate the properties of the merger events, the highlights from GWTC-3, and future planned observing runs.

Over the years, the sensitivity of LIGO and Virgo has improved due to a combination of detector upgrades, and improved data quality and analysis techniques. There are several ways to measure the sensitivity of a gravitational-wave detector. One is by estimating the approximate range to which an observatory can detect a typical binary neutron star merger: the bigger the range, the further away signals can be detected, and so the more detections we can expect. O3 was divided in two halves (named O3a and O3b) which were separated by a month-long break in October 2019. Many upgrades and repairs were completed during this month, including mirror cleaning at LIGO Livingston, replacing vacuum equipment at LIGO Hanford, and increasing the laser power at Virgo. This work, as well as continuous maintenance throughout observing runs, allows the detectors to maintain or increase their sensitivity. Figure 1 shows the median binary neutron star range has changed for each detector. Between O3a and O3b, the median binary neutron star range increased by 13.3% for Virgo, 6.5% for LIGO Hanford, and stayed around the same for LIGO Livingston (our most sensitive detector) with a slight decrease in sensitivity of 1.5%.

The raw data from a gravitational-wave detector comes from the time-varying intensity of the laser light measured at the interferometer output. This raw data needs to be calibrated to obtain the corresponding gravitational-wave strain amplitude. Calibration needs to be done carefully. We use laser light to push precisely on the mirrors to measure how the output of the interferometer changes. Initial calibration is done in near real-time. If needed, later re-calibration and subtraction of long-duration noise are used to produce the best available strain data which is used in this analysis.

After calibration and noise subtraction, the data needs to be quality checked. The most common issue we have when assessing data quality for binary merger signals is glitches, which are short-duration (seconds to minutes long) noise transients in the data. Some glitches have a known origin such as light scattering, but sometimes their origin is a mystery. Glitches occasionally overlap with a gravitational-wave signal and in these cases, we can perform glitch subtraction to remove them from the data as shown in Figure 2. Glitch subtraction was an important part of our analysis of the first binary neutron star signal, GW170817 and in GWTC-3, 7 events out of 35 required glitch subtraction. To discover more about glitches and to help us in our quest to understand more about them, head over to the community-science project, Gravity Spy.

Throughout O3a and O3b we issued public alerts of initial gravitational-wave candidate detections. Rapid public alerts enable the astronomy community to search for multimessenger signals from the events using electromagnetic telescopes and neutrino detectors. Public alerts were typically released within a few minutes of detections in O3b. Later re-analysis of the gravitational-wave data can lead to some events being retracted and further events being discovered. The final analysis presented in GWTC-3 benefits from improvements in calibration, data quality, and data analysis from the entirety of the observing run to assess if candidates are interesting or not. In O3b there were 39 public alerts reported, of which 18 survive the re-analysis and are included in GWTC-3 as candidates with greater than a 50% probability of being real. A further 17 events are reported for the first time in the GWTC-3 analysis.

We use two types of analysis to look for gravitational-wave candidates: template searches and minimally modeled searches. Template searches use a selection of simulated compact binary signals (or templates), which we use to filter the data for things that match the shape of the template and how it changes over time. Minimally modeled searches do not look for an exact type of signal, but do require that the same signal appears in multiple detectors. The template approach is usually better at picking out binary signals (as we know what they should look like), but the minimally modeled approach ensures that we do not miss anything because of not having the right template. When assessing whether or not a candidate could be a real signal, we calculate how likely it is that random noise could look like the candidate's signal by chance. Normally, the more consistent the signal is between detectors, the more confident we can be that it is is real.

In GWTC-3, we list all of our candidates that we estimate have at least a 50% chance of being real, as opposed to noise. This estimate relies not only on understanding the noise in our detectors, but also how often gravitational-wave signals should be observed by our detectors. As we are just starting to learn about the population of merging compact objects, these numbers can be uncertain. As we learn more about the population by making more observations in the future, we will be able to come back to check the candidates about which we are currently less certain.

Additionally, GWTC-3 includes a list of weaker signals which do not pass the threshold of a 50% chance of being real. Just like in GWTC-2.1, the subthreshold list for GWTC-3 includes any candidate event with a false alarm rate lower than 2 per day. There are 1,048 subthreshold candidates, most of which we expect to be noise; however this list may be useful to help astronomers in identifying potential multimessenger events.

Gravitational-wave names represent the date and time when the signals are detected in Coordinated Universal Time (UTC). Several previous event names only include the date, but as the detectors improve their sensitivity, we may detect more than one event per day. So, like we did with GWTC-2 and GWTC-2.1, we now add the time to the names so we can distinguish them more easily. As an example GW200208_222617 was observed on the 8th February 2020 at 22:26:17 UTC time.

Properties of our gravitational-wave sources

Our gravitational-wave observations contain information about the properties of the binaries that produced them. Properties can be intrinsic or extrinsic. Intrinsic properties describe the source itself, such as the masses and spins of the compact objects. Extrinsic properties describe how we observed the event from Earth and include the location of the source on the sky, its distance from the Earth, and the orientation of the plane in which the two compact objects orbit around one another.

We learn the properties of the binaries through parameter estimation. This is a statistical technique where we compare many possible gravitational waveforms (with different properties) to the observation data. The comparison tells us what values of the source properties are consistent with the data (assuming that we have a real gravitational-wave signal). In our results we select the 90% credible intervals from these ranges, which means that we are 90% certain that the properties of the binary lie inside that range.

The contours in Figure 4 show the 90% regions for two properties: the total mass and the mass ratio. The total mass tells us how heavy the binary system was overall. Masses are measured in units of solar masses M⊙. The mass ratio tells us how asymmetric the masses of the two compact objects that merged were. A mass ratio close to 1 means that the two compact objects were close to the same mass.

Studying the properties of the population as a whole helps us to learn about how these systems formed. We can also use these observations to put Albert Einstein's theory of general relativity to the test and even measure the rate at which the universe is expanding. A selection of highlight events from O3b are summarized below.

Based on the properties of the new 35 events listed by GWTC-3, 32 of them are likely binary black hole coalescences, and three are possible neutron star-black hole coalescences. We consider compact objects that are likely to have masses less than 3 M⊙ to be possible neutron star candidates. There were no binary neutron star candidates detected in O3b. Figure 5 also summarizes the most probable values of three key parameters for eight selected events.

Keen gravitational-wave watchers might notice the absence of GW200105_162426, which was reported along with GW200115_042309 in a previous publication. When we consider all the events in O3b together, we find that the probability of GW200105_162426 being a real astrophysical signal is 36%, which is below the 50% threshold for inclusion in the catalog. For more information about this, see the GW200105_162426 glossary entry below. Despite not passing the GWTC-3 threshold, the event does stand out against the background noise, so we definitely consider it an event of interest! If GW200105_162426 is real, then its source comprises a 9 M⊙ black hole and a 1.9 M⊙ neutron star.

A selection of highlights from our binary black hole coalescences are:

Looking to the future

The LIGO and Virgo Collaborations have revealed a universe abundant in gravitational-wave sources. To date, we have observed 90 events. GWTC-3 adds 35 events, including our best candidates for neutron star-black hole coalescences. As we continue to observe more events, we will learn more and more about the objects producing them and their properties as a population, and use them to continue putting General Relativity to the test. Detecting more events also means we increase our chances of seeing the more unusual members of these populations.

The LIGO and Virgo detectors are now offline for improvements before the upcoming fourth observing run, currently set to get underway in 2022. The KAGRA detector in Japan will also join O4 for the full run. Adding more detectors to the network will help to improve how well we can localize potential sources. 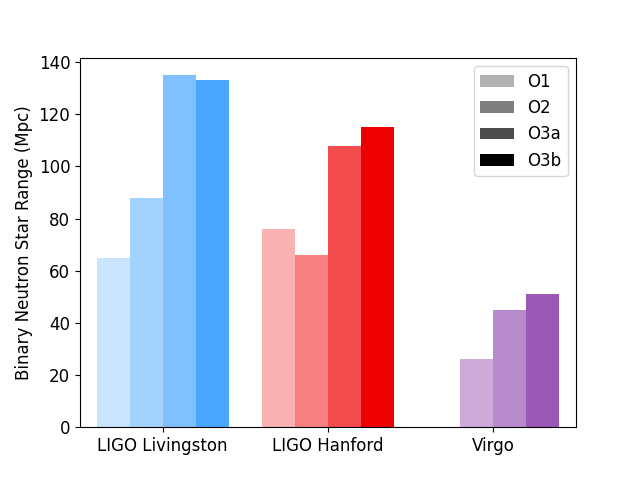 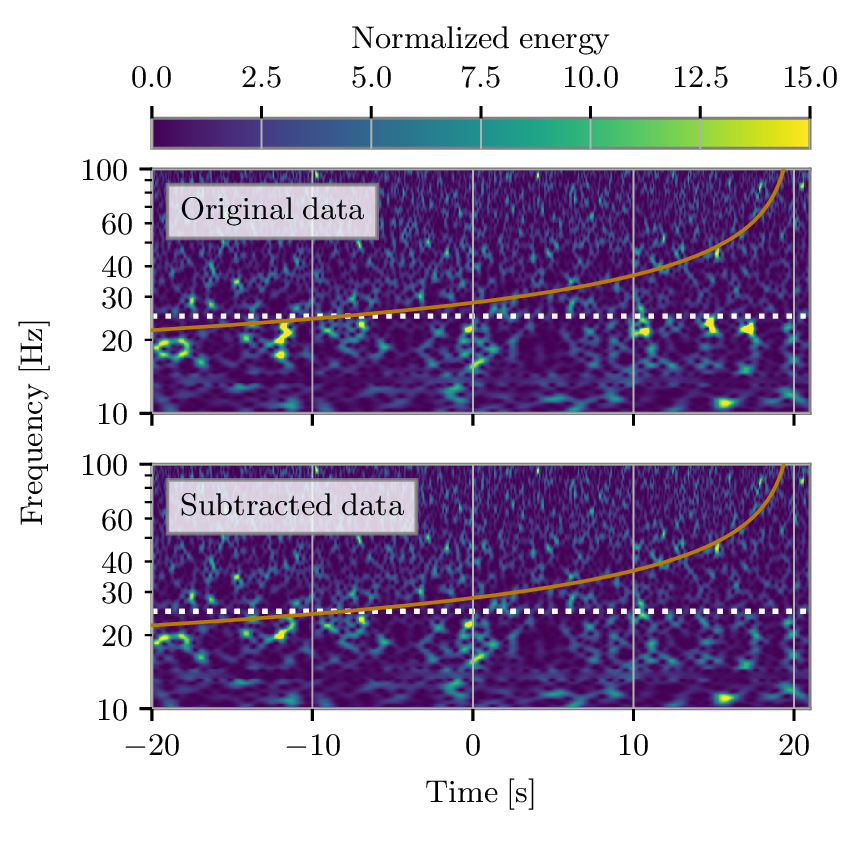 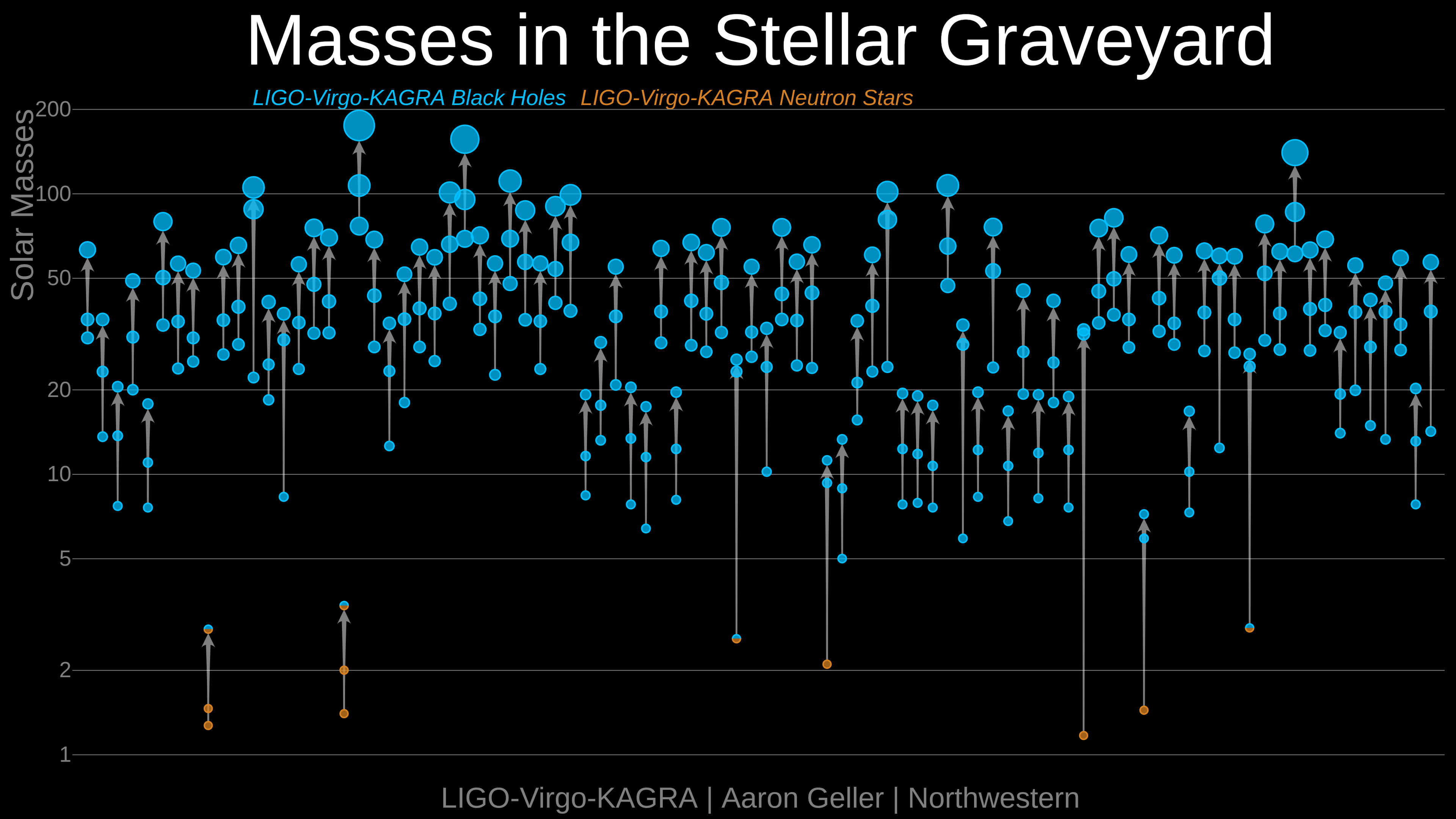 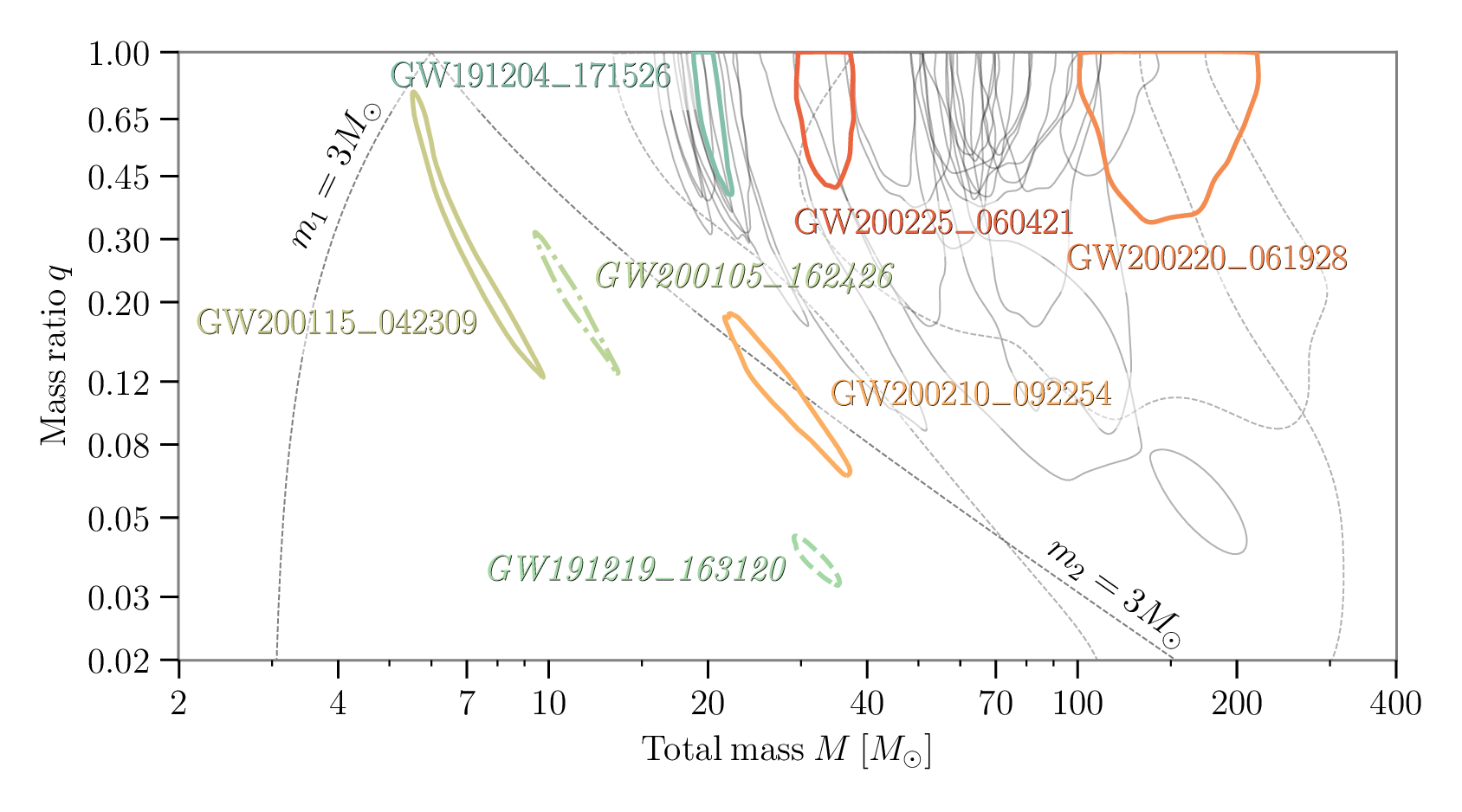 Figure 4 (Fig. 8 from our publication): Estimates of the total mass (M) and mass ratio (q) between the least massive and most massive component, for all O3b events. Each contour represents a different event and encloses the most probable values of the parameters at 90% probability (the 90% credible region). Several events are highlighted in color due to their interesting properties (see main text and our paper).

Figure 5: Plots showing the most probable values of three key parameters of eight binary compact objects from GWTC-3: the binary chirp mass, M; the mass ratio, q, between the least massive and most massive component; and the luminosity distance, DL. Each binary is illustrated to the right-hand side of the plot, with circle size representing mass and the component spins indicated (not to scale). Credits: LIGO-Virgo-KAGRA Collaborations/Isobel Romero-Shaw/OzGrav.