Planning for a bright tomorrow: prospects for gravitational-wave astronomy with Advanced LIGO and Advanced Virgo

Where do you see yourself in five years? This is a dreaded interview question. It is hard to predict where you will end up in the future, as you never know what opportunities (or setbacks) you will encounter or how your interests will change. However, it is a good idea to have a plan, to think about what you want to accomplish so you can set yourself goals. Scientific collaborations also have to think about the future, and it is just as hard for us to do so. Often, we are trying to do things for the very first time so it can be difficult to judge how long they will take; however, with so many people from all around the world involved, it is extremely useful to have a plan so that we can co-ordinate our efforts.

LIGO and Virgo have thought about where we want to be in five (and more) years, and have written up an answer. This might not be much use for job interviews, but should let other astrophysicists know what to expect. A plan was first produced back in 2013, and now we are updating it with our progress. The good news is that we are currently right on target! In fact, we are near the upper end of our expectations.

The Advanced LIGO detectors officially began their first observing run, which is called O1, on 18 September 2015. The detectors are not yet at final sensitivity, but are roughly four times more sensitive than the pre-Advanced LIGO best. It is a long and complicated process to improve our gravitational-wave detectors. Rather than wait until they are at their final sensitivity before beginning observations, we plan to carry out several observing runs along the way. This is done because we are excited to start the search for gravitational waves as soon as possible; because we want to gain experience operating our detectors in stable, undisturbed observing state, and because we want to test out our data-analysis methods. Figuring out how to extract all the information we can from our data (while checking carefully for any gravitational waves that might be present) is just as tricky as getting the instruments working in the first place. O1 is planned to last for four months, closing mid-January 2016. Then work will start on upgrading the instruments for our second observing run, which is called O2; those upgrades will be informed by what we have learned about the instruments during O1. O2 will start in 2016 and last around six months. Hopefully, around this time Advanced LIGO will be joined by Advanced Virgo. Following O2 we will upgrade again, before observing for nine months in our third observing run, which is called (you can probably guess) O3. Each upgrade should improve the sensitivities of our detectors and increase our chances of detecting gravitational waves. Eventually, if all goes according to plan, both Advanced LIGO and Advanced Virgo will be running at full sensitivity by 2021.

When localising sources on the sky, gravitational-wave detectors work much like ears locating the source of a sound. The time difference between the signal arriving at different detectors gives information about where it came from. Adding Advanced Virgo to the network will made a huge difference in locating the source! There is also a plan to put a LIGO detector in India to enhance the network further, and within the next few years the LIGO and Virgo detectors will also be joined by a Japanese detector KAGRA that is currently under construction. The localization on the sky will improve as the detector network advances. Adding more detectors to the network will also increase the fraction of the time that we have the two or more detectors observing (which we need to make a detection). However, improving the detectors' sensitivity will also make the network sensitive to more distant gravitational-wave sources, which would have fainter electromagnetic counterparts. Astronomers have a difficult challenge ahead of them.

The one thing we cannot plan for is exactly when a gravitational-wave signal will pass through the Earth. However, each step of progress in detector sensitivity and data analysis increases our chance of making a detection. LIGO, Virgo and KAGRA will be detecting gravitational-wave signals soon, and perhaps there will be electromagnetic counterparts too. 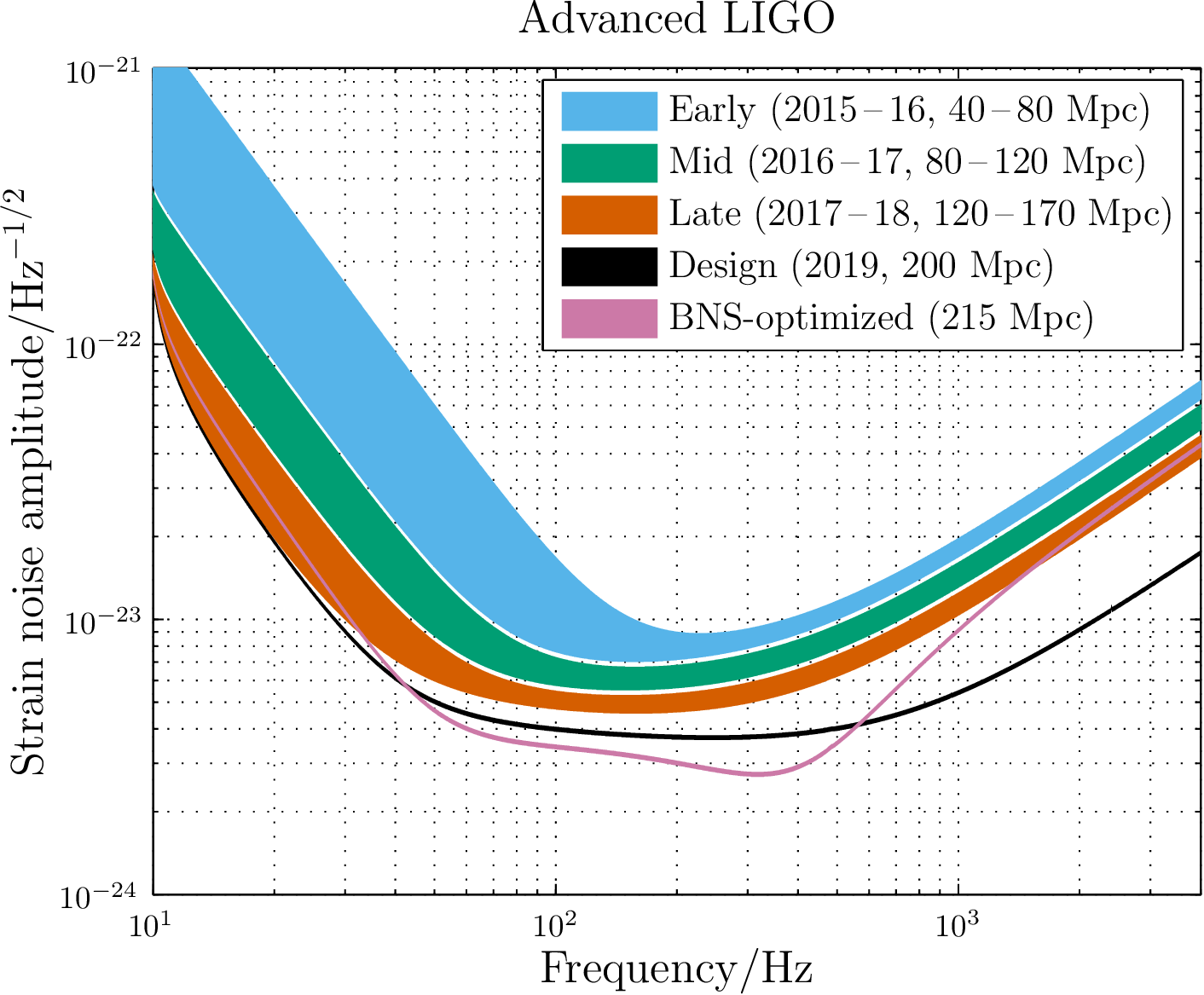 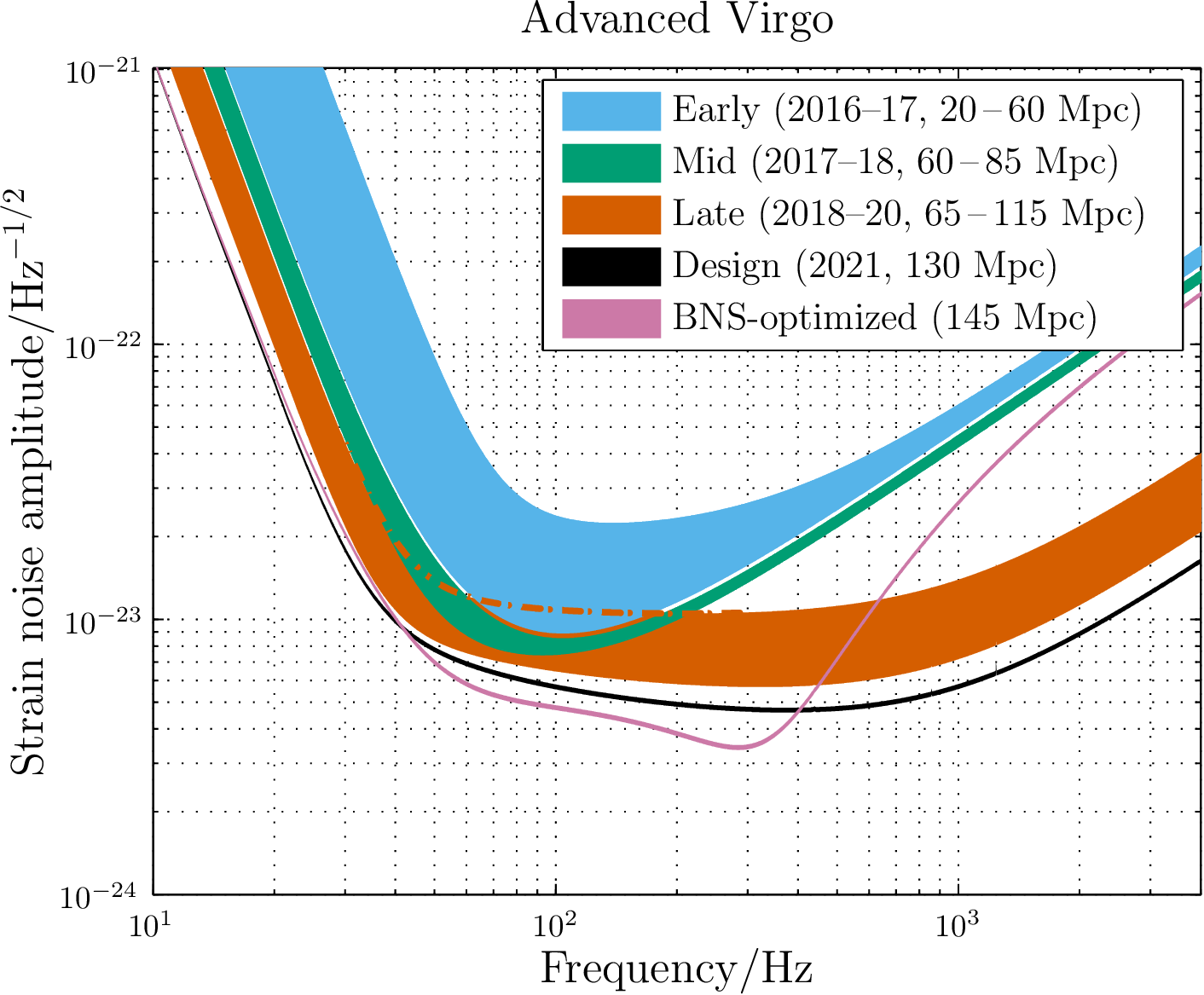 Our current plan for how the sensitivity of the Advanced LIGO and Advanced Virgo detectors will progress with time. The curves on the plots show the expected strain noise across the spectrum of gravitational-wave frequencies; the strain is a good measure of the sensitivity of the detectors to gravitational waves. The lower the sensitivity curve on the plots, the better we are at measuring gravitational waves (the easier it is to detect quieter signals, like those from sources further away). We cannot predict exactly how things will go, but these are our current best estimates. The BNS-optimized curve is an idea to specially tune the detectors to search for binary neutron stars, which are expected to be one of the most common sources. 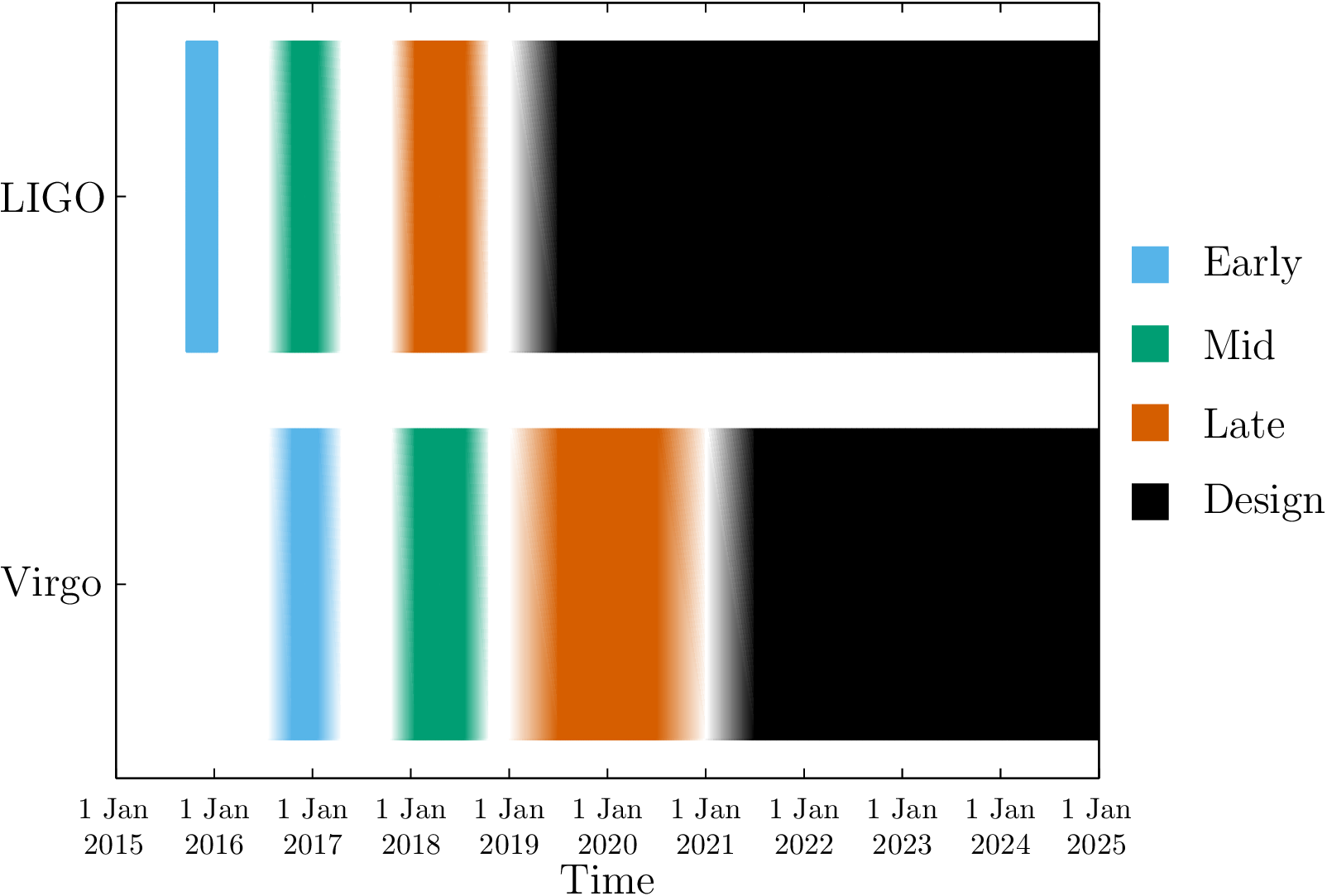 A plausible time-line for how LIGO and Virgo detectors will operate over the coming decade. Dates become more uncertain the further they are in the future. The colored bars correspond to observing runs, with the colors matching those in the sensitivity plots above. Between observing runs, we work on tuning our detectors to improve their sensitivity, and have engineering runs where we test the instruments and check that we understand how they behave while running. 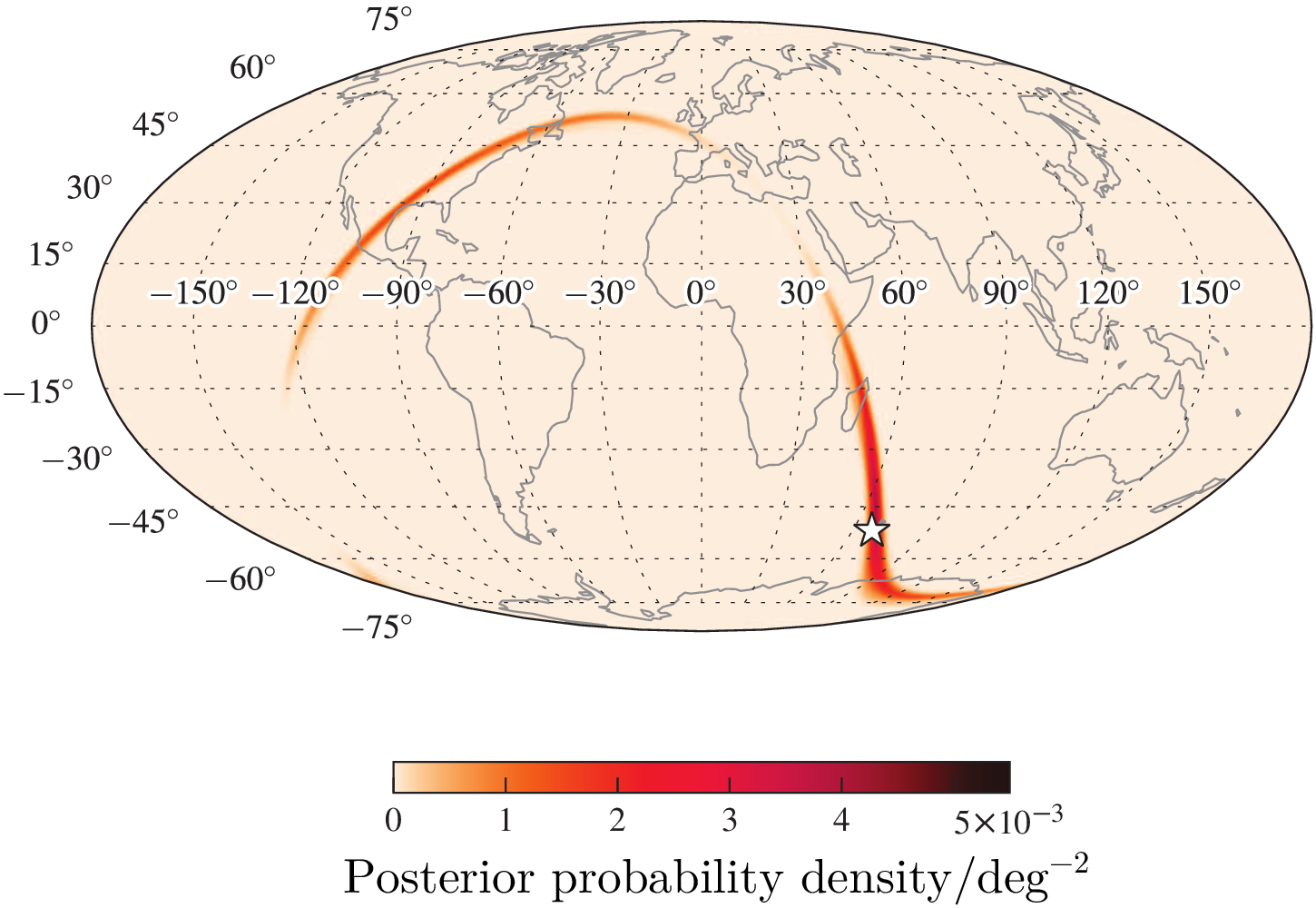 A simulated sky map for the location of a binary neutron-star merger that could be seen in O1 (Berry et al. 2015). Darker reds indicate more probable positions and the star indicates the true location. The map allows astronomers to decide where to point their telescopes in order to have the best chance of seeing an electromagnetic counterpart. With only two detectors, we localize the source to somewhere in a circle on a sky from which the gravitational-wave signal would pass through our detectors at times that match our measurements. In these map projections, the circles look like long, extended arcs of reddish color (where the posterior probability density is high).