Searching for continuous gravitational wave signals with the Hough transform

Spinning neutron stars are promising candidates for producing gravitational wave signals detectable by the LIGO and Virgo laser interferometer detectors. These objects may generate continuous gravitational waves if they are not perfectly symmetric around their rotation axis. For these sources the emitted signal is a quasi-periodic wave whose frequency changes slowly due to energy loss through gravitational wave emission, and possibly other mechanisms. The wave's amplitude depends both on the distance to the source, and on the amount of asymmetry, which is described by a parameter called the 'ellipticity'.

Continuous gravitational wave signals from spinning neutron stars are expected to be very faint, since most neutron stars are located thousands of light-years from Earth, and their ellipticities are predicted to be very small. Many months of observations with LIGO and/or Virgo are therefore required in order to extract such faint signals from background noise. Due to the motion of the Earth relative to each source, the gravitational-wave signals received will be modulated. In particular, the frequency will drift over time, depending on the location of the source in the sky. This is not a problem when targeting neutron stars whose positions and spin frequencies are accurately known from radio, X-ray or gamma-ray observations (see the summary on searching for gravitational waves from pulsars), but only a small fraction of all the neutron stars in our galaxy have been seen in such ways.

All-sky searches for unknown neutron stars are a challenge because of the large number of different sky locations, as well as the wide range of frequencies and changes in frequency (also called spin-down rates) that must be searched. Optimal methods based on matched filtering where the data are integrated over the entire observation interval are completely infeasible due to the large number of combinations of parameters that must be considered. Therefore, techniques have been developed to break the data into short sections, analyze each section independently (which requires much less computation), and then combine the results. One way to do this is the Hough transform, a well-known technique used for detecting patterns in digital images. In this case, the Hough transform is used to search for signals in which the observed time-frequency evolution fits the pattern expected from the Earth's motion and intrinsic pulsar spin-down rate. The Hough transform has been used in previous searches for continuous gravitational waves published by the LIGO and Virgo Collaborations, and it has also been used in the Einstein@Home distributed computing system.

Using a new detection pipeline based on the Hough transform, an all-sky search for continuous gravitational waves in the frequency range 50 - 1000 Hz and with the frequency's time derivative in the range zero to -8.9 ⋅ 10-10 Hz/s has recently been performed on two years of data collected during LIGO's fifth science run. No evidence for gravitational wave radiation was found in this search and upper limits have been set on the intrinsic gravitational wave strain amplitude. For example, the analysis of the second year of S5 data excludes a gravitational wave signal with a strain amplitude greater than 8.9 ⋅ 10-25 (at the 95% confidence level) near 150 Hz, where the detectors were most sensitive. Assuming that all the energy lost as the neutron star spins down is emitted as gravitational waves, the study would have detected neutron stars with an ellipticity of ~ 10-4 as distant as 1.9 and 2.2 kpc (1 kpc = 1000 parsec = 3262 light-years), for the first and second year of S5, respectively. Normal neutron stars, with ellipticities less than 10-5, would have been detected if they were emitting at 350 Hz and at distances no further than 750 pc.

The new detection pipeline used in this analysis has permitted deeper searches than in previous Hough all-sky searches, maintaining robustness, and improving selection efficiency. For the first time in continuous gravitational wave searches, a 'chi-square veto' was used to reject apparent signals from low-level noise arising from mechanical vibrations and electronic oscillation in the detectors. This improved discrimination technique might be very useful for the analysis of the next set of data produced by the LIGO and Virgo interferometers (science runs S6, VSR2 and VSR4) in which the data at lower frequencies are not ideal.

For more information on how these figures were generated and their meaning see the preprint at arXiv.org. 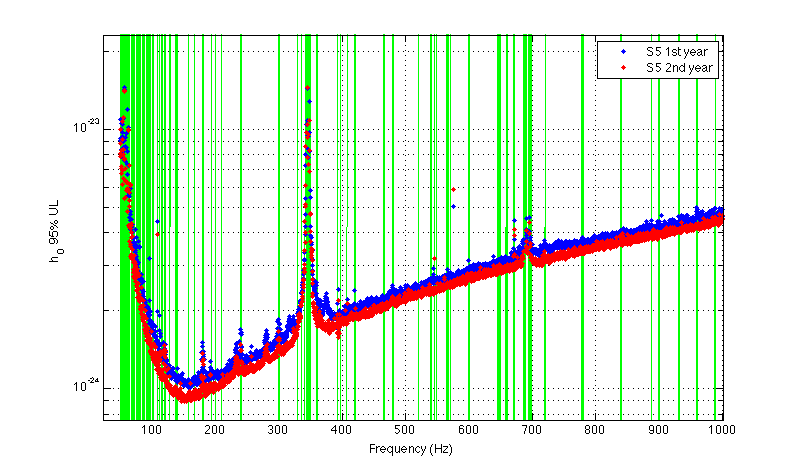 This plot shows the upper limits on the gravitational wave strain amplitude at which 95% of simulated signals could be confidently detected in both years of the S5 science run. The vertical stripes correspond to 252 0.25-Hz frequency bands contaminated by instrumental disturbances and for which no upper limits are provided. 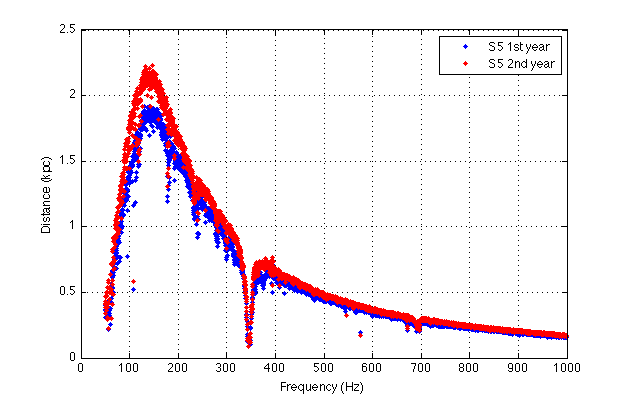 Plot of the distance range (in kpc), in both years of the S5 science run, as a function of the frequency, assuming neutron stars are spinning down solely due to gravitational radiation and at a rate of -8.9 ⋅ 10-10 Hz/s. 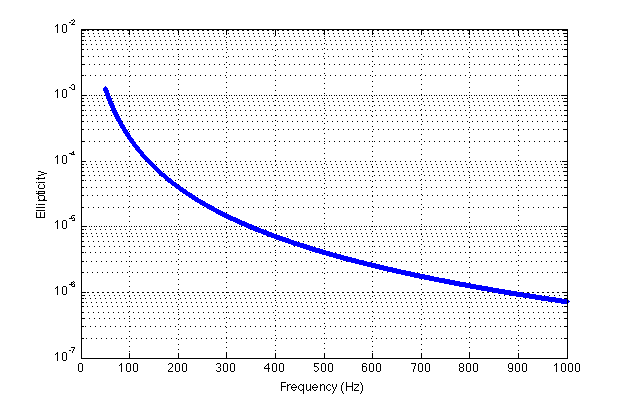 Plot of the ellipticity as a function of the frequency for sources emitting in gravitational waves all the energy lost while spinning down at the same rate of -8.9 ⋅ 10-10 Hz/s.