What is a gravitational-wave background?

What can they tell us?

How do we detect them?

Did we detect any gravitational-wave background?

For this analysis, we used the data from two LIGO detectors, called H1 and H2, that were located at the same facility at Hanford, WA. Since the two co-located detectors share a common environment, this pair was more susceptible to correlated local environmental noise that could mimic a gravitational-wave signal. Hence, we needed to develop and apply new techniques to identify and remove frequencies and times with significant correlated noise from the environment. These new techniques used the data from monitoring instruments such as seismometers (used to measure the shaking of the ground), microphones (used to measure sound waves), and magnetometers (used to measure magnetic fields). After applying the new noise mitigation techniques, the data showed no evidence of correlated environmental noise at high frequencies (460 - 1000 Hz), making this a "clean" frequency range in which to look for a gravitational-wave background signal. However, we found no evidence for such a signal in our data. In other words, the H1 and H2 detectors appeared to only have uncorrelated intrinsic noise in that frequency range.

Since we did not see a signal, we were able to put an upper limit of on the strength of the possible high-frequency gravitational-wave background that was ~180 times better than the recent LIGO-Virgo result using widely separated detectors (see Figure 1). We also performed an analysis at low frequencies (80 - 160 Hz) searching for a cosmological gravitational-wave background. However the analysis was dominated by instrumental correlations and hence we could not set any upper limit in that case. Even though we did not see any signal, we expect the new techniques developed here will be useful in the advanced detector era when even the widely separated detectors could be affected by global magnetic fields. With the expected improvement in the sensitivity of advanced LIGO and Virgo detectors as well as other global detectors, we intend to continue searching for gravitational-wave in the coming years.

For more information on how these figures were generated and their meaning see the publication on arXiv.org. 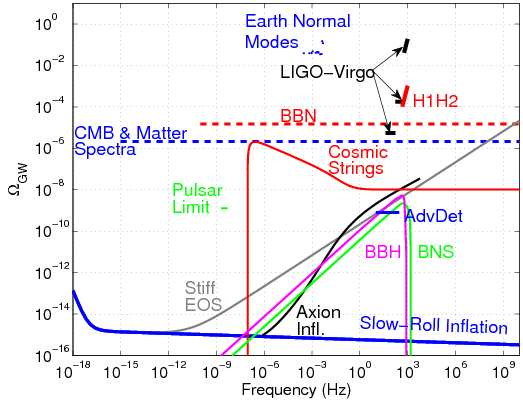