Ringing of the Cosmic Bells: A Search for Black Hole Vibrations

THE SOUND OF A PERTURBED BLACK HOLE

Every star in the universe vibrates or oscillates in some manner. Turbulence on the surface of the Sun causes well-known solar oscillations that are studied under the field of helioseismology. Cepheid variable stars pulsate with very regular periods and act as a valuable tool for measuring distances in the universe. Neutron star oscillations, studied under the field of asteroseismology, can be used to probe the interior of these compact objects. And even the extreme objects known as black holes vibrate when disturbed by an infalling object or a collision.

In fact, the oscillation properties of a black hole are surprisingly similar to those of a ringing bell or tuning fork. Just as a bell has a unique tone and timbre determined by its size and composition, each black hole rings with a unique fundamental pitch and duration that depends on its mass and rate of spin. These properties were described in 1973 by Saul Teukolsky who studied what would happen to a spinning black hole if it was perturbed from its stable configuration. He found that the black hole would oscillate with a collection of quasinormal modes, or characteristic frequencies, before eventually returning to a stable configuration.

A ringing black hole sends out ripples in spacetime that propagate outward at the speed of light. These are gravitational waves (GWs). Similar to the light that travels from distant stars and galaxies, GWs that travel to Earth will tell us the story of the event that produced the waves. We will be able to observe the structure of a neutron star or black hole or look back to the very early universe. GWs will provide a way to "listen" to the cosmos.

Many violent astrophysical events, such as exploding supernovae or colliding neutron stars and black holes, produce a unique GW signature. The signature of a perturbed black hole is known as a damped sinusoid GW that we call a "ringdown". Since we can model the signature waveform, we can utilize a signal-processing technique known as matched filtering to search noisy detector data for a weak hidden signal. The hidden signal should reveal itself by "standing out" from the background, which we measure as a large signal-to-noise ratio, when the most similar model waveform matches the signal. In practice, detector data can be very noisy and we must utilize others tools such as multi-detector coincidence and signal consistency to determine how significant a potential GW signal really is.

The LIGO and Virgo interferometric detectors are capable of detecting broad-band GW signals with frequencies from tens to thousands of cycles per second. This frequency range roughly corresponds to perturbed black holes with masses that are 50 to 500 times the mass of our Sun. Interestingly, these masses fall within the regime of intermediate mass black holes (IMBH), an elusive class of objects that have masses up to 100,000 times the mass of our Sun. We have strong evidence for stellar mass black holes and supermassive black holes but no conclusive evidence for the existence of IMBHs with masses that lie between the ranges of the other two types of black hole. Some models and observations suggest that IMBHs could be the source of ultra-luminous X-rays or that they could exist in the centers of globular clusters where two IMBHs could possibly form a binary system. Two IMBHs that inspiral and merge into one perturbed black hole could be a strong source of GWs detectable by LIGO and Virgo, particularly from the perturbed black hole ringdown. Detection of GWs from these objects may be the only way that we can find them. Additionally, the GWs would allow us to infer information about how the perturbed black hole was created and give us an opportunity to test the accuracy of General Relativity, Einstein's theory of gravity.

We performed a matched filter search for ringdown GWs over LIGO-Virgo data from 2005-2010. Our search targeted damped sinusoid signals with masses in the range 10 to 600 solar masses. The strongest source of gravitational waves in this regime would be from merging IMBHs. The figures shown on the right report our sensitivity to this particular type of source. Additionally, we could also detect ringdown GWs from other types of perturbed black holes such as the stellar mass black holes resulting from the collapse of very massive stars. However, our sensitivity to these is significantly less than that reported in the figures.

After searching the data for GWs and carefully classifying the candidates using a multivariate statistical classifier, we found no signals from perturbed IMBHs. This non-detection was used to place an upper limit on the rate of IMBH mergers in the universe for different possible mass ranges. Based on our best upper limit, we found that the rate of such mergers with a total mass between 100 and 150 solar masses is very likely less than one per year within a distance of 490 million light years. This result is consistent with the rate upper limit reported for an 'unmodeled' search for IMBH mergers. Our results tell us that these astrophysical events are exceedingly rare!

Additionally, we explored the improvement in sensitivity over the first search for ringdown GWs from IMBH mergers performed on LIGO data collected between February and March of 2005. Due to a huge increase in analysis time, an improvement in detector performance, and more sophisticated search techniques, we found a rate upper limit that is nearly three orders of magnitude more stringent than our previous results.

With the improved low frequency performance of the Advanced LIGO and Virgo detectors, which are expected to begin operation in 2015, we will have sensitivity to IMBH mergers with masses up to ~1000 to 2000 solar masses. At peak sensitivity, the horizon distance for the perturbed black holes shown in Fig. (1) will approach cosmological distances. Thus we will open our ears to ringing black holes across a large chunk of the observable universe. For the first time, we will have the chance to hear the chorus of IMBH bells and begin to understand the extreme nature of these mysterious objects.

For more information on how these figures were generated and their meaning, see the preprint at arXiv.org or the associated LIGO Document page. 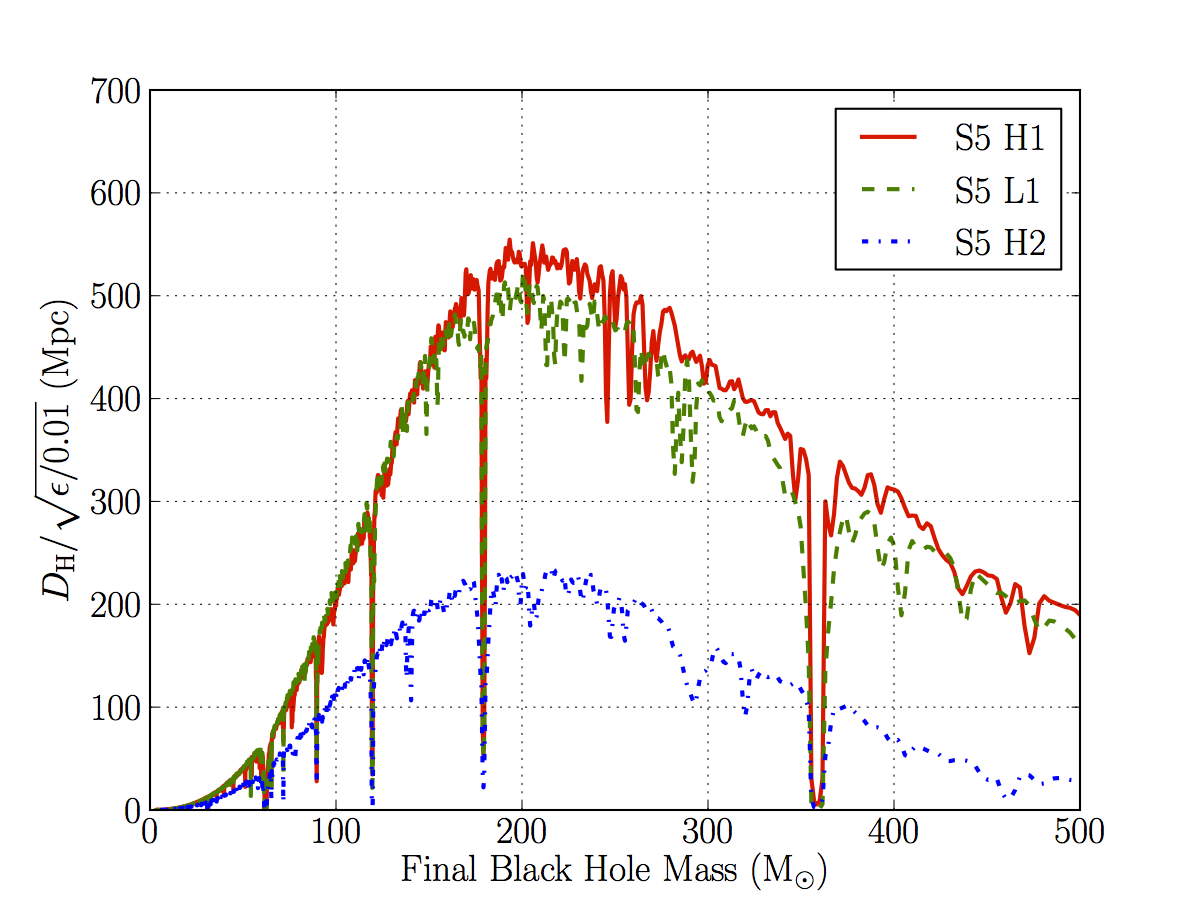 Figure 1: We analyzed data from LIGO's fifth and sixth science runs (S5 and S6) and Virgo's science runs 2 and 3 (VSR2/3). In order to gauge the sensitivity of our search to GWs from perturbed IMBHs, we can plot the ringdown horizon distance as a function of black hole mass, for example for the LIGO detectors (H1, H2, and L1) during S5 as shown above. Horizon distances are comparable for data from S6-VSR2/3. The horizon distance shown here is the maximum distance to which we could see a perturbed black hole with a signal-to-noise ratio of 8. We assume that the source is optimally located and oriented to provide the strongest signal to our detectors, that the black hole is radiating ~ 1% of its mass in GWs, and that it is spinning very quickly. In reality, it is unlikely for a source to be perfectly oriented, to emit a significant portion of its mass as GWs, and to have very high spin; thus, we expect the actual sensitivity of the search to be less. During S5, we could detect a ~ 200 solar mass black hole at a distance of ~ 530 Megaparsecs (1.7 billion light years) with a signal-to-noise ratio of 8. This distance encompasses all of the Virgo Supercluster and extends out to include other local galaxy superclusters. 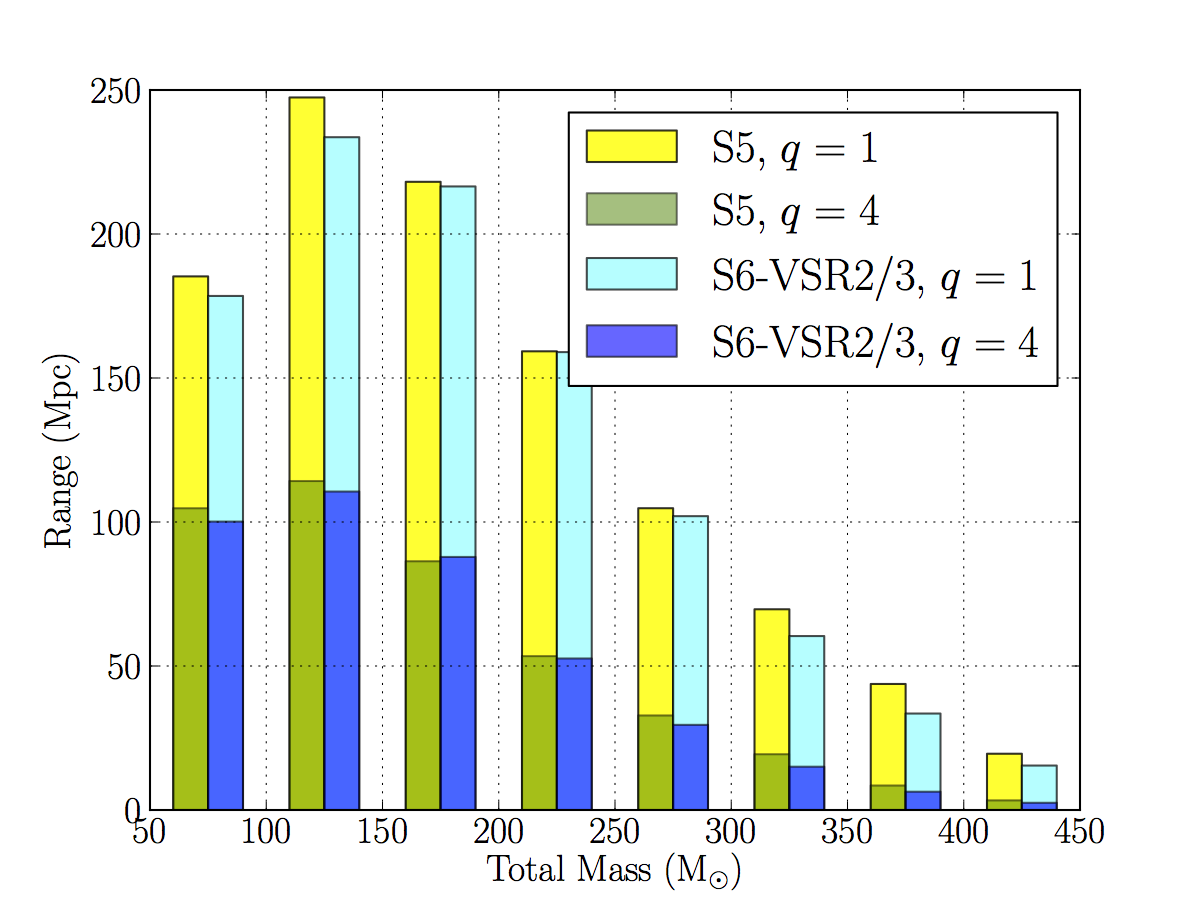 Figure 2: In order to understand the true sensitive distance of the search, rather than the horizon distance discussed in Fig. (1), we added simulated signals from non-spinning, merging IMBHs to the data and tested our ability to detect them. The figure shows sensitive distances for our search over LIGO's fifth science run (S5) and over LIGO's sixth science run and Virgo's science runs 2 and 3 (S6-VSR2/3). The simulated signals were given a random sky location and orientation as well as a range of masses between 50 and 450 solar masses. Additionally, since the sensitivity of the search also depends on the ratio (q) of masses of the two merging black holes, for simplicity, we choose to explore only mass ratios of 1:1 and 4:1. We are most sensitive to perturbed black holes with total masses in the range 100 to 150 solar masses resulting from two merging IMBHs with equal masses. The average sensitive distance in this case was ~ 240 Megaparsecs (783 million light years). However, if the mass ratio of the two merging IMBHs was instead 4:1, the average sensitive distance decreases by more than a factor of two to ~ 110 Megaparsecs (359 million light years).