We present results of a search for continuously emitted gravitational waves from the neutron star in the brightest low-mass X-ray binary (LMXB), Scorpius X-1. The analysis covers 10 days of data from LIGO's 5th science run (S5) in the frequency band ranging from 50 to 550 Hz. Since no signal was detected, we set 95% confidence upper limits on the signal strength of the gravitational-wave emission, constraining the ellipticity of the neutron star in Scorpius X-1.

Low-mass X-ray binaries are binary systems consisting of a neutron star, black hole, or white dwarf in a binary orbit with a normal star of lower mass (usually a star quite like our own sun). The lower mass companion star is drawn into the gravitational field of the compact object, which starts shredding mass layers away from the normal star in a process called accretion. LMXBs are usually very well observed through their x-ray (and other) electromagnetic emissions, providing positional and orbital (and sometimes rotational) parameters, thereby reducing the uncertainty in the parameters we have to search over. Neutron stars in LMXB systems are interesting sources of gravitational waves because accretion provides a natural method of deforming the star away from rotational symmetry, powering the gravitational-wave emission.

Scorpius X-1 is the brightest LMXB in our galaxy and one of the closest to us, only 9000 light years away. It is well observed in several electromagnetic bands, giving us accurate information on several parameters including the sky position, orbital period and semi-major axis. However not all parameters of the system can be observed or accurately determined (for example, the neutron star spin frequency). A proposed balance between the accretion acting to make the neutron star spin faster and the gravitational-wave emission trying to slow it down would suggest that Scorpius X-1 is potentially one of the strongest continuous gravitational-wave emitters detectable by ground-based detectors.

We have developed a new program called Sideband to search efficiently for continuous gravitational waves from neutron stars in binary systems using only partial knowledge of the binary orbital parameters. As a first stage we analyse the data without accounting for the binary motion of the neutron star. This stage generates a well-defined pattern (a 'comb' of finely spaced sidebands, or teeth) in the spectral output that are due to the orbital motion. We can model the sideband pattern with information on the orbital period and semi-major axis, so we can re-analyse the output of the first stage to account for the binary motion without exact knowledge of all of the orbital parameters.

The search was tested on 10 days of S5 data covering the frequency band from 50-550 Hz. Unfortunately we were not able to claim any detection in the short stretch of initial LIGO data we analysed. However, we were able to place the most sensitive upper limits on the strength of a signal from Scorpius X-1 in the frequency band that was analysed. The search is computationally cheap and comparable in sensitivity to previous searches, despite using much shorter observation times. This makes it an appealing search to run as a first pass in the coming second-generation gravitational-wave detector era. Further work on extending the coherent time span beyond 10 days will allow even greater sensitivity in the exciting times to come. 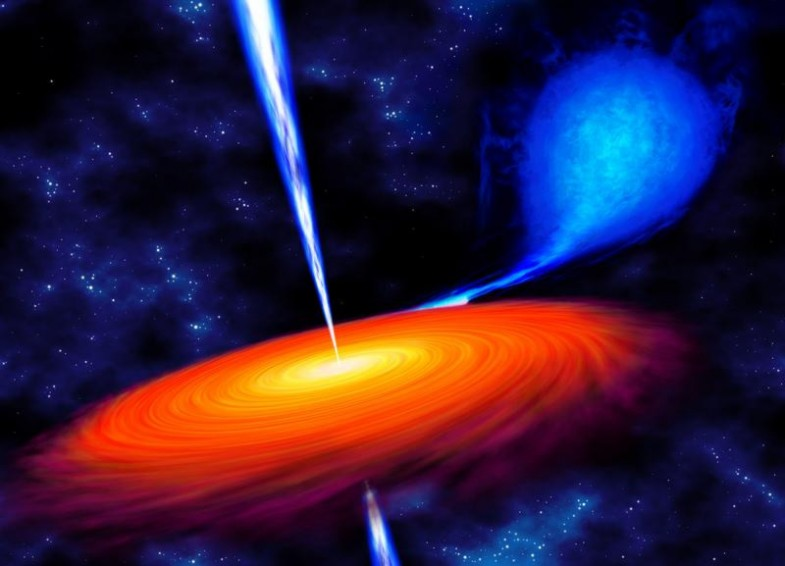 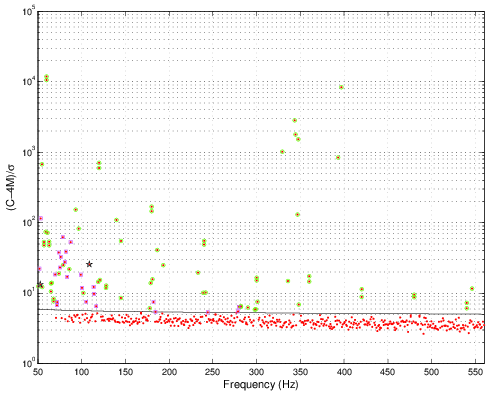 This figure shows results from the search across the full search band. The red dots show the maximum detection statistic from the 1-Hz sub-band indicated by the horizontal axis. The vertical axis indicates the statistical significance of the data point. The solid black curve represents the amplitude at which the data becomes significant above the noise. Points above this curve are highlighted by black stars to indicate artificial signal injections, green circles to indicate frequencies known to contain disturbances from noise and pink squares to indicate results that needed further investigation. 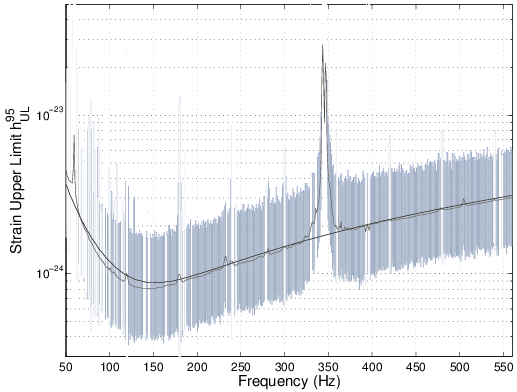 This plot shows the upper limits for the search as a function of frequency in the case where the orientation of the neutron star is assumed known from electromagnetic observations and used as prior information. The search frequency runs across the horizontal as in the previous figure. The vertical axis represents the gravitational wave strain amplitude, which is a measure of the strength of the signal. The solid grey curve presents the median upper limit for each frequency band, while the grey region extends from the minimum to the maximum upper limit in each 1-Hz sub-band. The solid black curve shows the expected upper limit for Gaussian noise at the S5 design sensitivity for comparison. These results indicate that the gravitational wave strain amplitude from the neutron star in Scorpius X-1 at the most sensitive region of the detector around 150 Hz is less than 8 x 10-25 at 95% confidence. The large spike around 350 Hz is due to large noise disturbances, hence the least sensitive results are returned around this frequency.