There is more than one way for a star to go out with a bang. Some end in supernovae, stellar explosions that can momentarily outshine an entire galaxy of stars. Some (short) gamma-ray bursts, on the other hand, are thought to be caused from the collision of two neutron stars (or a neutron star and a black hole). The collision produces a brief but intense flash of gamma radiation along with a short gravitational-wave "chirp" signal, which sweeps from low to high frequencies. Another family of (long) gamma-ray bursts are thought to arise from the collapse of individual massive stars. We do not know exactly what goes on during or after a long gamma-ray burst, but some of the conditions necessary for the emission of gravitational waves are present: dense matter, enormous amounts of energy, and a rapidly rotating newborn neutron star (or black hole).

The LIGO analysis described here listened for gravitational waves from 50 long gamma-ray bursts observed by the Swift satellite. In each case, the data were consistent with detector noise, indicating that, whatever gravitational waves were present, they were not loud enough to be detected. For the moment, therefore, the last rites of massive stars remain shrouded in mystery. However, valuable information can still be gained by careful analysis of what we did not hear. In particular, we determined that if an energy equivalent to one tenth the mass of our own sun is converted into gravitational waves during a typical long gamma-ray burst, then the gamma-ray bursts we analyzed must be between 3–110 million light years (Mly) away depending on the frequency of the gravitational waves. (Mass and energy are related by Einstein's famous equation: E=mc2.) While 110 Mly is many times the size of our own Galaxy, it would be unusually close for a gamma-ray burst, most of which are at least ten times further away.

The Advanced LIGO and Advanced Virgo experiments, scheduled to begin taking data in 2015, are expected to eventually achieve sensitivity levels that will allow us to probe objects ten times further away than the data analyzed here, where gamma-ray bursts are not uncommon. With upgraded detectors and continually improving methods for teasing out gravitational-wave signals from noise, Advanced LIGO and Advanced Virgo may at long last allow us hear the ghostly final screams of dying massive stars.

For more information on how these figures were generated and their meaning see the publication on arXiv.org. 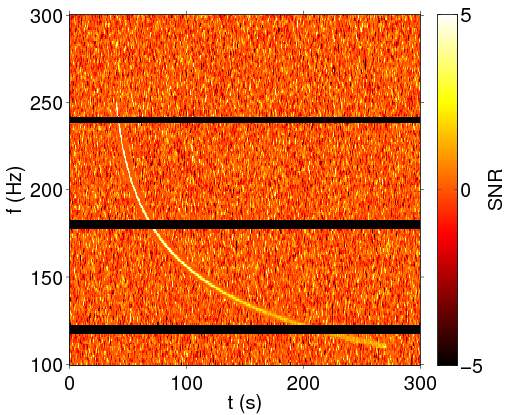 This plot shows signal strength (labeled "SNR" for signal-to-noise ratio) as a function of both time (x-axis) and gravitational-wave frequency (y-axis) for a simulated gravitational wave added to detector noise. The color scale indicates how strong the signal is with orange corresponding to no signal and white corresponding to a strong signal. The simulated signal appears as a curved yellow track. Detector noise produces fluctuations in the signal strength throughout the plot even where no signal is present. The goal of this analysis is to find gravitational-wave tracks like this one buried in detector noise, though a realistic signal would be much weaker. This example has been made very loud so it is easy to see. The black horizontal lines indicate frequency bands which have been excluded for being too noisy. 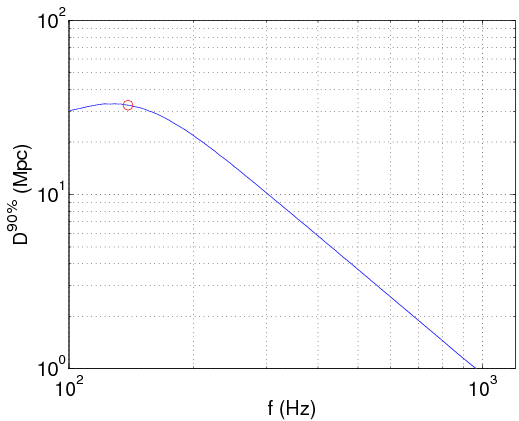 This plot shows the lower limits on the distance to long gamma-ray bursts as a function of gravitational-wave frequency assuming that an energy equivalent to one tenth the mass of our sun is emitted in gravitational waves. The limits are calculated so that we are 90% confident that the true distance is larger than the limits. The distances are given in Megaparsecs (Mpc). One Megaparsec is equivalent to 3.26 million light years.