Searching for the youngest neutron stars in the galaxy

Black holes may be getting all the press these days, but neutron stars are more complicated and involve more physics: These collapsed stars are almost as compact and therefore as relativistic as black holes, but unlike black holes the matter in them is still visible to the outside universe. The matter in the interior of a neutron star is a hundred trillion times denser than rock, can have magnetic fields a quadrillion times stronger than the Earth does, and may be made of stranger particles than any we see except as brief flashes in particle accelerators. Gravitational waves carry information about that matter more directly than electromagnetic waves (light, x-rays and so on) that only reach us from the surface of the star. Continuous waves in particular could tell us some of the properties of that matter that are hard to get even from other types of gravitational-wave signal.

Young neutron stars may be the most likely to emit continuous gravitational waves, since the supernovae that form them are violent, asymmetric events that might leave the stars "roughed up" for some time. That is, the solid crust which neutron stars certainly have may not be smooth, and as a star rotates the roughness in the high density matter will emit gravitational waves. Also, electromagnetic observations of pulsars - neutron stars that appear as flashing dots in radio, x-rays, visible light, etc - tell us that the old ones are spinning down slowly, and thus cannot be emitting strong gravitational waves. The youngest neutron stars (up to a few thousand years old) might also still have active r-modes, a type of wave in the fluid that makes up most of the star that can keep itself going through gravitational-wave emission.

A few of those youngest neutron stars are seen as pulsars, and already have been targeted by LIGO and Virgo searches. But more are seen as steadily glowing (in x-rays) points in supernova remnants, expanding debris clouds from the explosions that gave them birth. The precise positions obtained from x-ray observations (often with NASA's Chandra satellite) give us enough information to search for these stars with almost as much sensitivity as the pulsar searches, even though we don't know the frequency and have to search over a band of frequencies (and different ways the frequency could spin down). We can also do the searches with less computing power than the all-sky searches, which you can help with. Previously, with LIGO S5 data, we searched for continuous waves from the youngest known neutron star in the galaxy, in a famous supernova remnant called Cassiopeia A. This time, with LIGO S6 data, we did ten searches. These included the new record-holder for youngest supernova remnant in the galaxy (G1.9+0.3, named after its galactic longitude and latitude); which is small enough to search like this even though no neutron star is seen. We searched for supernova remnant Vela Jr. twice, because there are large uncertainties in its age and distance which are used to set up search parameters such as the frequency band. The locations of the supernova remnants in the galactic plane are shown in the figure below.

We didn't find any gravitational waves, so we set statistical upper limits on the signals that could be buried in the detector noise. These upper limits on signal strength as a function of frequency pop up when you hover the mouse over supernova remnant names in the figure below. At the right of the page we also show three figures for one search, the wide-band one for for Vela Jr. The upper limits depend on frequency mainly because the detector noise depends on frequency, and each upper limit dot covers a 1 Hz band of frequencies. All of the search upper limits (black dots) beat (are lower than) the best signal we could hope for (solid black lines) based on energy conservation and the age of and distance to each remnant, sometimes by a lot! (The red dots show 1 Hz bands where we set no limit due to narrow-band instrumental artifacts.) When Advanced LIGO and Advanced Virgo run, starting in 2015, we'll be able to look for fainter and fainter signals as the noise improves.

Where did we look? 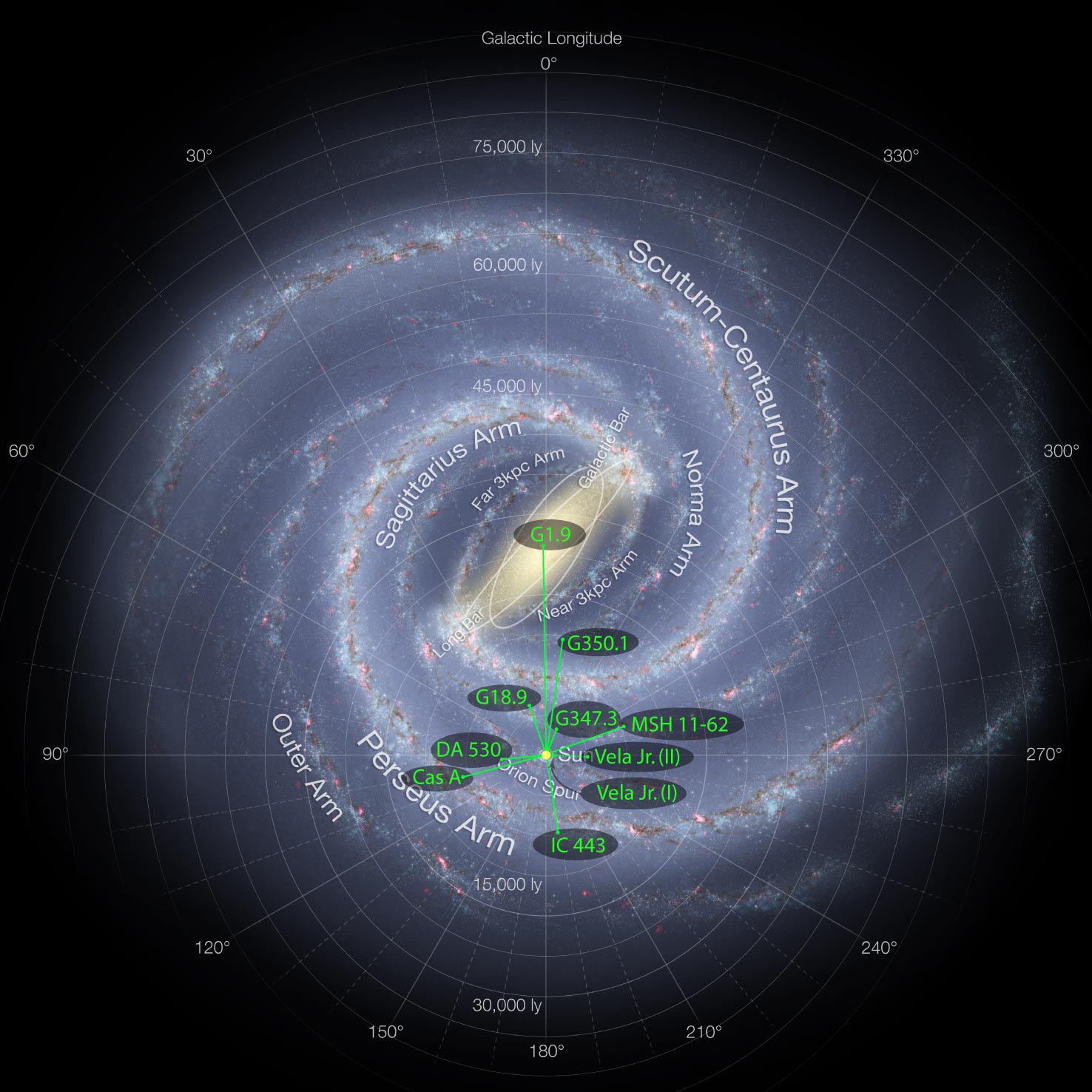 Galactic positions of the supernova remnants we searched, all of which are very close to the galactic plane. The yellow dot represents the Solar System. Two possible locations for Vela Jr. were used. The upper limits plots for each respective search are linked below. (Image modified with permission from NASA/JPL-Caltech/ESO/R. Hurt.)

An animation of what an r-mode looks like to an observer hovering over the star as it rotates (courtesy of C. Hanna and B. Owen, Penn State). Imagine the dots are buoys dropped on a grid in latitude and longitude. The r-mode is a pattern of currents that makes the buoys move in ellipses as shown.

For more information on how these figures were generated, and their meaning, see the preprint at arXiv.org. 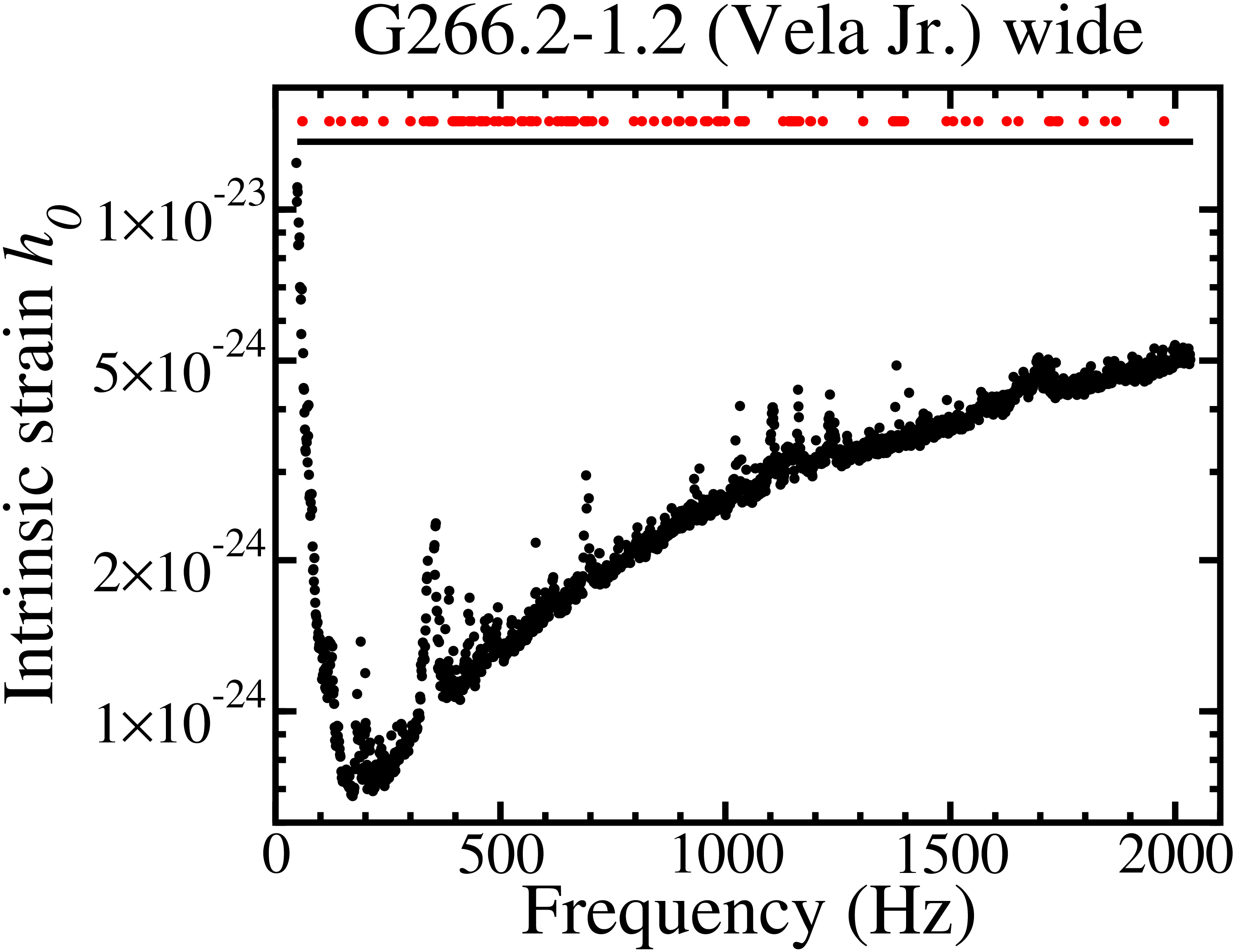 Upper limits on gravitational wave signal strength versus frequency for the Vela Jr. wide search. Intrinsic strain is a measure of signal strength which is basically the fractional squeezing and stretching of spacetime due to gravitational waves that we would see with an optimally oriented neutron star and detector. The actual strain measured by a detector is typically less by a factor of two or three due to those orientations and the sky location of the neutron star. 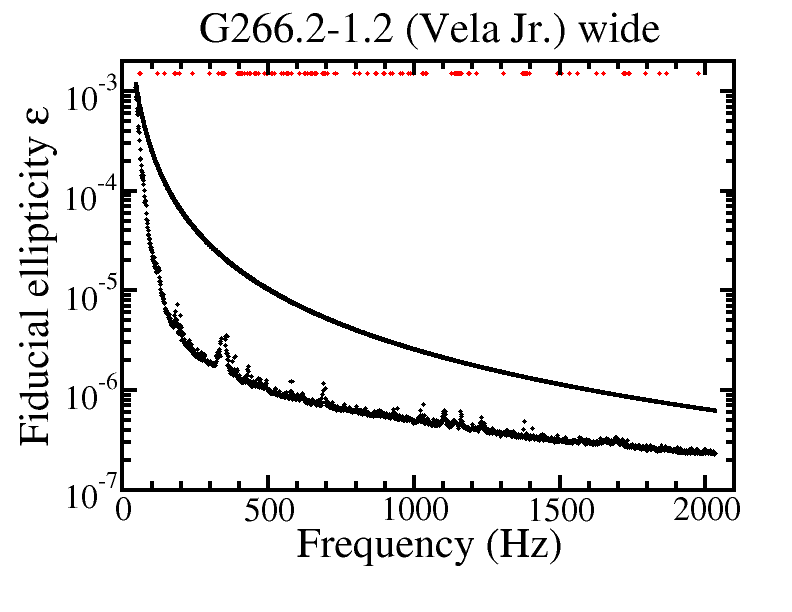 Same as above, but ellipticity versus frequency. Ellipticity is a measure of how rough or nonspherical the neutron star is, basically the height of a mountain as a fraction of the star's radius. 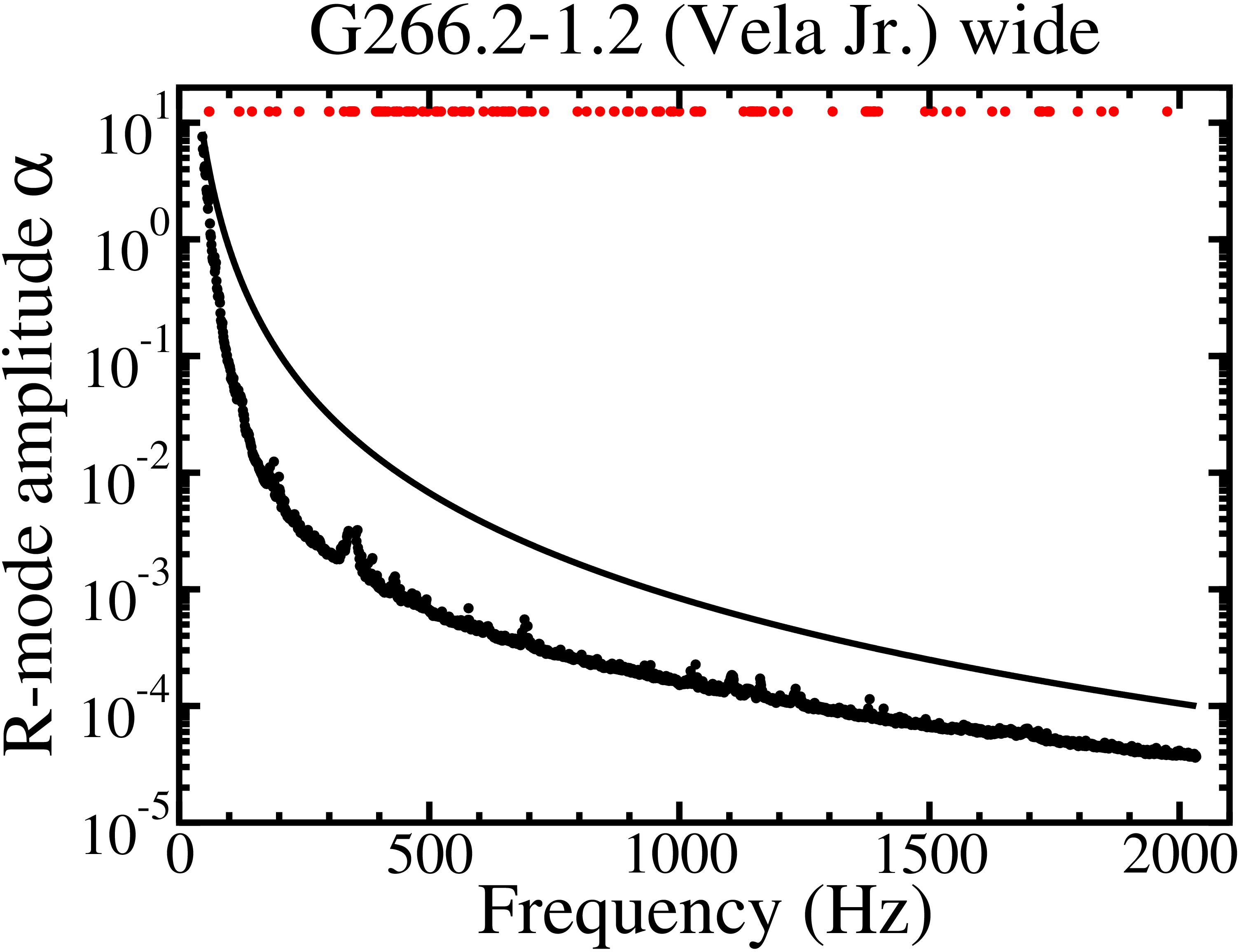 Same as above, but r-mode amplitude versus frequency. This measure of r-mode amplitude is basically how far, as a fraction of the star's radius, an average buoy moves in the r-mode animation above.